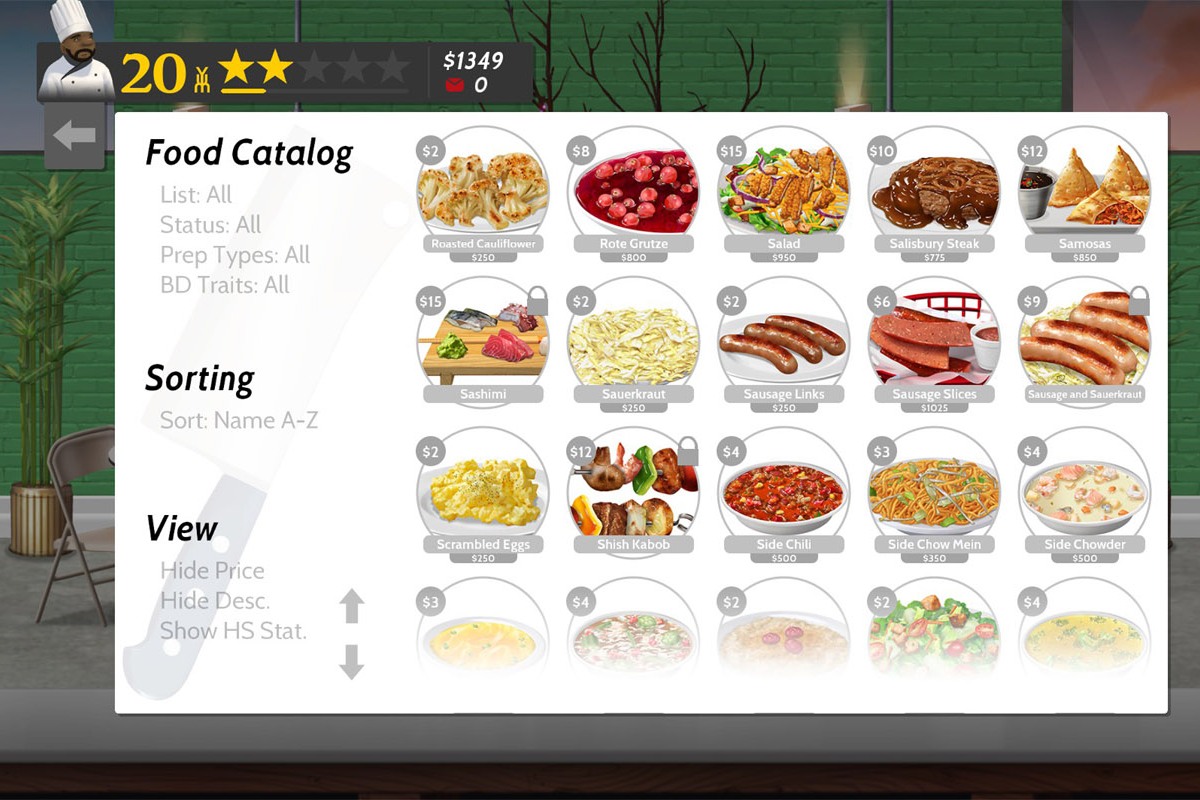 Over at Time to Loot, Naithin penned a post about Genre Burnout. It’s something I’ve been idly pondering over recent months.

On one hand, it’s undeniable that I’m off MMOs as a concept, possibly for good.

Nearly 5 years ago, I wondered what would come out the other side of playing a Guild Wars 2 (now with NEW raids included!) after bitterly railing about the toxic divide that introducing raids would cause.

Now, with the benefit of hindsight, I can answer that question. Frustration, definitely. Sometimes at the game, sometimes at myself, sometimes at other people. Mostly the annoyance of having been proven Cassandra-like correct at the gaping social divide amongst players.

Fortunately, drama was mostly averted, save for one incident where boundaries were trod upon and some workplace skills in mediation, crystal clear communication and compromise had to be hastily yanked out and practiced. Players, by and large, do this really poorly, which feeds into the frustration above.

I’d like to think I avoided most elitist prick-ism, but I confess to being reluctant to join public encounters that exceed a certain level of challenge, on the assumption that the average player group is -not- going to succeed at it, or if I do give it a try, I’ll do the silent “drop out without a word” maneuver after a few failed and obviously-not-going-to-make-it attempts. I’ve watched others be far more elitist than me and simply been silent witness or just quietly thankful that I made it past the ‘barely acceptable’ threshold because I know without a doubt that I’m not investing the time and effort to ‘git gud’ to the point which would make these other people deliriously happy.

Burnout? I’m still raiding twice weekly without fail, barring the odd RL engagement. By any dev metric, surely that is not burnout.

But I feel like I’ve lost my rose-colored glasses on what GW2 could have been, and have accepted that it just wanted to blend into the MMO crowd and appeal to the whole spectrum of MMO players, raid-lovers included. That it is just one MMO among many. That traditional MMO gameplay doesn’t actually do much for me, in terms of being a forever game or tick many of my boxes. (If it did, I’d probably already have been playing Everquest, or World of Warcraft, or Final Fantasy XIV, or The Elder Scrolls or … whatever.)

Been there, done that.

With the last couple years of GW2, been there, done that -again-.

I’m done with main games, primary MMOs, or the one virtual world to rule them all.

I cannot conceive of ever starting over in some brave new world (pun intentional.) What would be the point? To get bigger numbers? To ‘win’ over someone else? To make friends and play with others? To collect all the things and show others that you did?

I’m not sure I ever much had that great enjoyment or use out of Multiplayer, and if the former doesn’t quite do it for me, I think we can safely dispense with the Massively prefix as well.

On the other hand, I am still occasionally finding reasonable levels of amusement playing parts of individual MMOs.

The actual beat-by-beat combat of fighting a raid boss with a character I’m comfortable playing is smooth and relaxing flow.

There was a certain level of RNG lottery fun in joining random PUG strike missions at various timezones during the first two weeks of the Eye of the North introduction – sometimes you luck into a really smooth competent party, sometimes it’s rougher but still manageable, and sometimes it’s utter carnage that is best left wordlessly.

The act of deciding on a small, achievable goal and then following through on it to completion is always going to have a certain ‘click’ of satisfaction at ticking a checkbox, regardless of the game I do it in.

And the same ‘what’s the point?’ argument could be made for singleplayer games as well. Does any progress or learning in a game matter? Is it just about the journey and the experience? One could also have a journey and probably -multiple- experiences in a multiplayer game too.

It’s becoming all equivalent, as I mentioned in my last (now ancient) post four months ago.

I am behind in Warframe. I am always behind. I play it solo singleplayer and like it that way. I have not made a Railjack; I have not yet played Scarlet Spear. I’ll get to it when I get to it.

Instead, I have been chasing the mini goals of relic grinding and building Prime warframes, because I couldn’t be bothered going for ‘lesser’ versions when a Prime one is available. I am super slow because I do it all by my lonesome and never join others in relic sharing missions. I get my Primes anyway, in the end, some gazillion relic farms later. Oberon Prime and Ivara Prime have been on my to-do list for the last month or two, and I just finished popping the last piece today. Now there’s Titania Prime to go.

Path of Exile Delirium League is out and I am not actually playing it. I missed the start because I was busy doing something else, then in the middle, I thought, maybe I’ll give it a go, and somehow I got diverted down the track of attempting to solo self farm an Oni-Goroshi unique.

For those not in the know, this mostly means repeat farming the very first map, Twilight Strand, over and over with multiple characters. I idly thought that this reminded me of Guild Wars 1’s Ascalon Defender achievement where one stayed in Pre-Searing Ascalon, and decided to try it once, just for the experience.

Two level 7 characters and one level 8 later, it’s turned into a sort of begrudging grudge match in slow motion. I -refuse- to do anything else but try to pop the sword, and because I’m not actually insane, I don’t farm for more than half an hour at a time. Lately, it’s been just try a few runs and then quit and play another game. The league might end before it drops. So be it.

All the red X’s I marked are stuff I’ve not even installed, let alone played. Mostly they are last month’s Humble Bundle Choice games and a free game.

One green tick games are stuff I played a bit.

At my level of no-discernable-skill, Dota Underlords is an amusing RNG gamble that I mess around with Hardcore difficulty bots. It offers me the ability to learn how to recognize various DOTA heroes and what they vaguely do, and the relaxation of letting AI beat on each other. It gives me the realization that it makes no difference to me whether I wind up in sixth place, fifth place, third, second or even, rarely, first. Should it matter? Win some, lose some, it’s a game, it’s fun for a few rounds, and then I put it down.

Ever so slowly, I have been attempting to finish SOMA. I’d like to complete it, and then delete it off my hard disk because that’s 9gb of valuable disk space I’d like to reclaim, and someone, somewhere, said it was a classic game worth the playthrough.

Honestly, it’s one of those games that is not really doing it for me. It’s a slooow as molasses walking simulator that utilizes a bunch of horror tropes (which I don’t really scare or react easily to, or feel much about). I turned off all the actual danger because the one thing that would make me ragequit without ever completing it would be dying repeatedly to some dumbass monster because I didn’t have the patience to hide in shadows until it went away.

I end up wandering in circles because navigating in murky water is not my forte and it is not scary, it is just frustrating and makes me pull up a walkthrough trying to match my steps with the instructions until I’ve figured out where the game wants me to go next. My game session progress is measured in walkthrough pages. I’m about 50% into sunk cost and I’ll get around to a little more progress someday… just not today.

Battlechasers Nightwar is a fun enough JRPG-like game, if a little slowly paced. Played it for a couple hours, then had enough. Eliza was an interesting visual novel experience that I played for a session, then put down and never quite got back to.

Every now and again, when I crave a walk in the woods, I go back to comfort game theHunter: Call of the Wild and tromp around slowly, hoping to bag a virtual deer.

Two green tick games are games I deep dived into:

Stardew Valley – made a new character and played nonstop until Year 3 and grandpa’s ghost came along to tell me I did a fantastic job. Then lost steam because the next couple of goalposts were far away in terms of money and would clean out the bank. So it goes. Maybe someday I’ll get back to it.

Don’t Starve – got into Shipwrecked obsession for a while. A nomadic explorer lifestyle is not really me in survival games. I love to bunker down in a base. Shipwrecked almost explicitly disrupts this playstyle. Kept dying of some cause or another before making it into the next season. Going for yet another roguelike run gets addictive, until one day, they are suddenly not.

Risk of Rain 2 has no ticks. It’s on current free weekend trial. So I trialed. Not quite for me. The difficulty is a little beyond me, and I can’t quite get my head around the scavenge-all-the-items-and-hope-for-good-RNG playstyle. Maybe it’s a carry over from Battle Royales. Maybe it’s why I could never really get good at Binding of Isaac.

Unreal World has been a current tapas game poison of choice. I think I’m getting back into turn-based roguelikes – might veer back to Angband and TOME next.

Unreal World is very simulationist, you play an Iron Age Finn and mostly try to live a low tech lifestyle without dying from one thing or another.

My current run lucked into a bear very early on, which I somewhat foolishly chucked a javelin at. That wound up with the bear charging me and a duel to the death of mad dodging and stabbing. 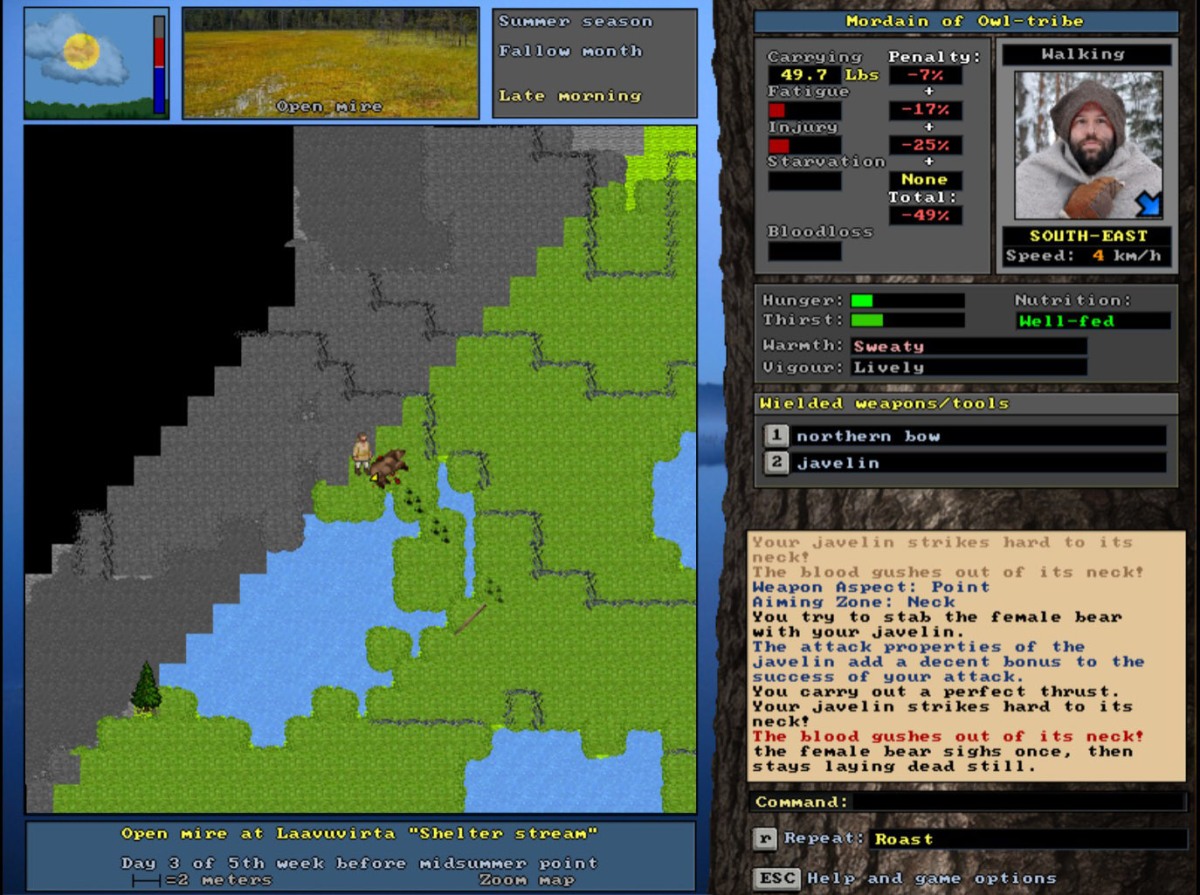 It broke one arm, which left me crippled on doing various activities for many days until the fracture healed, but hey, I lived, and it died! 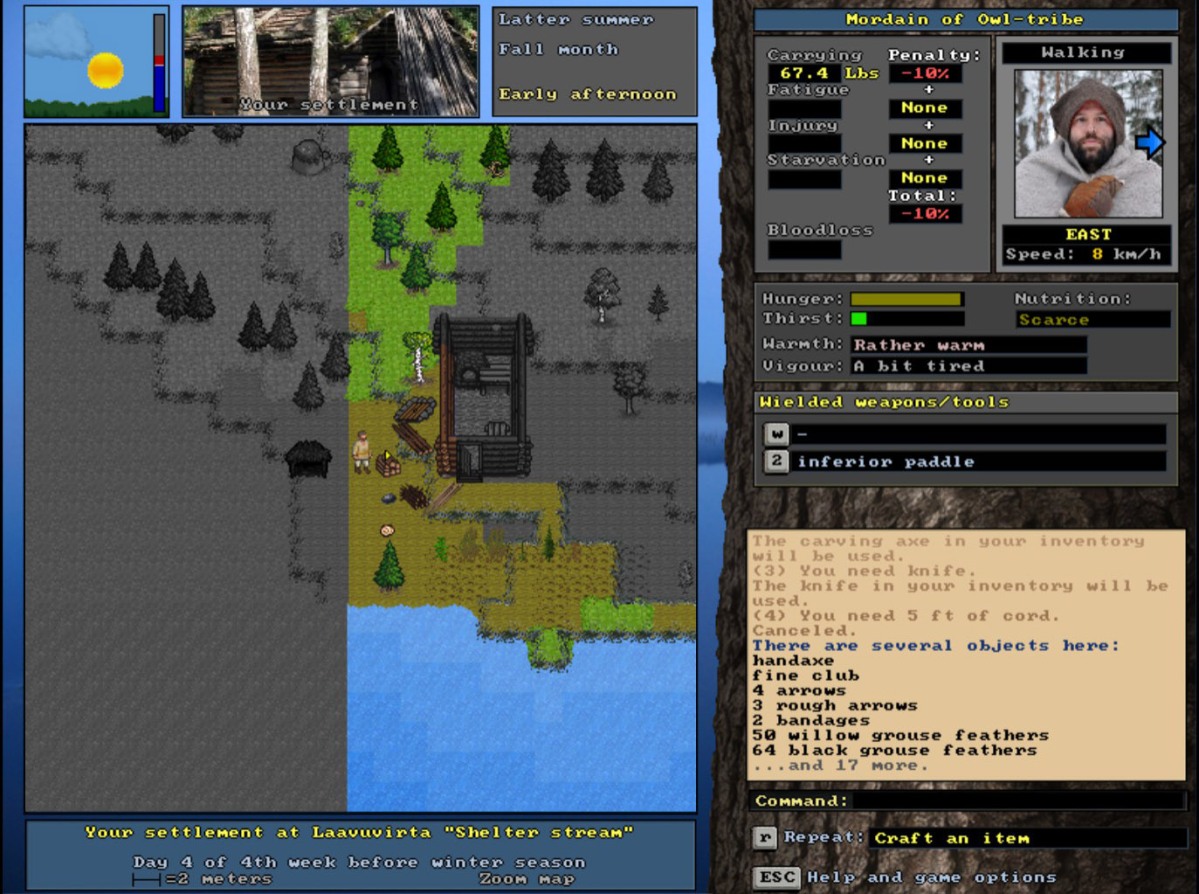 Set up a little log cabin before winter set in. I love the bunkering playstyle in survival games, I may have mentioned. 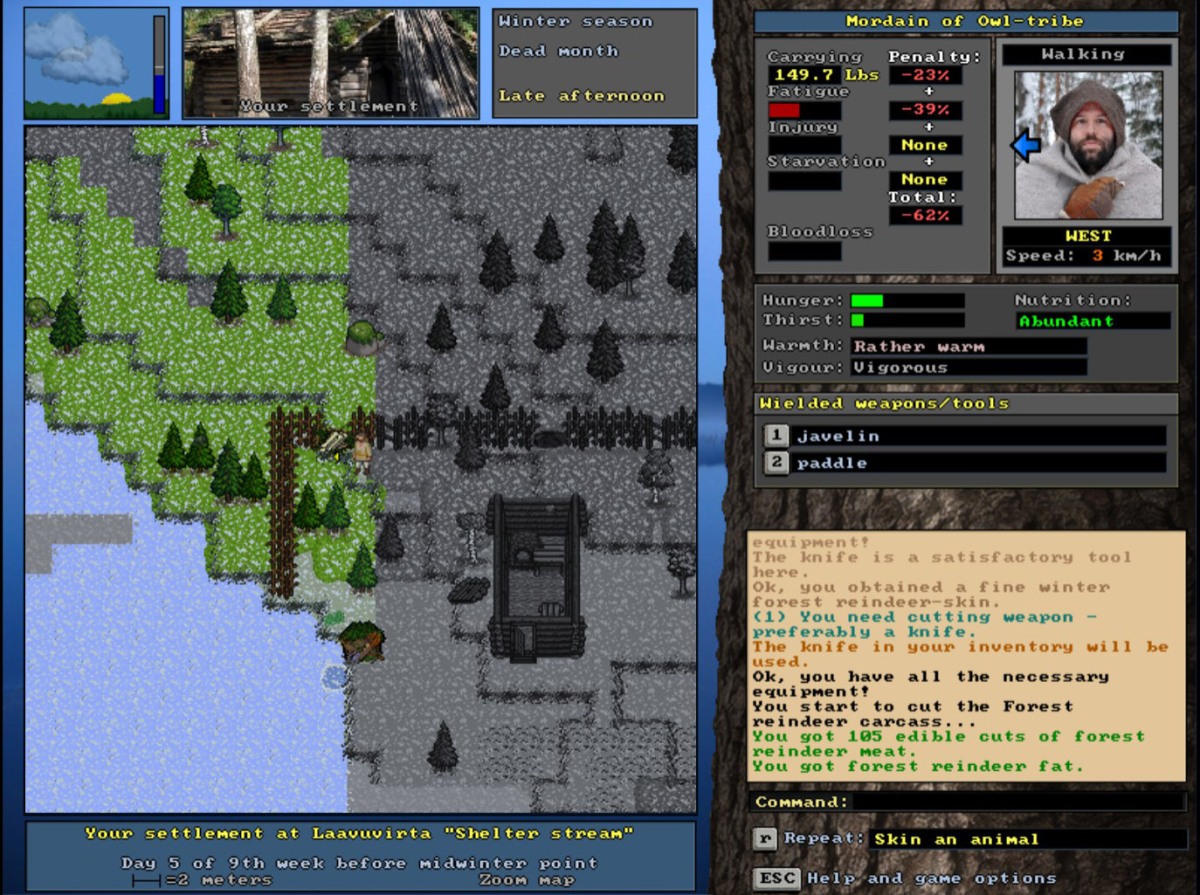 Doing well through winter. A reindeer actually blundered into the pit trap that surrounded my log cabin, something that felt really lucky. I usually spend days checking on all the traps I’ve set up with no returns.

So it goes. I’ll play it till it gets boring or I get distracted, and then I’ll move on to something else.

Ever since mentioning Master of Magic to Syp in a comment, I’ve been thinking of giving that a replay at some point.

My Epic Games list is filling with free games. This months Humble Choice Bundle has arrived. Super Adventure Box is coming. Who has time to play just one game?

Who has time to play -all- the games?

3 thoughts on “Tapas All The Things”