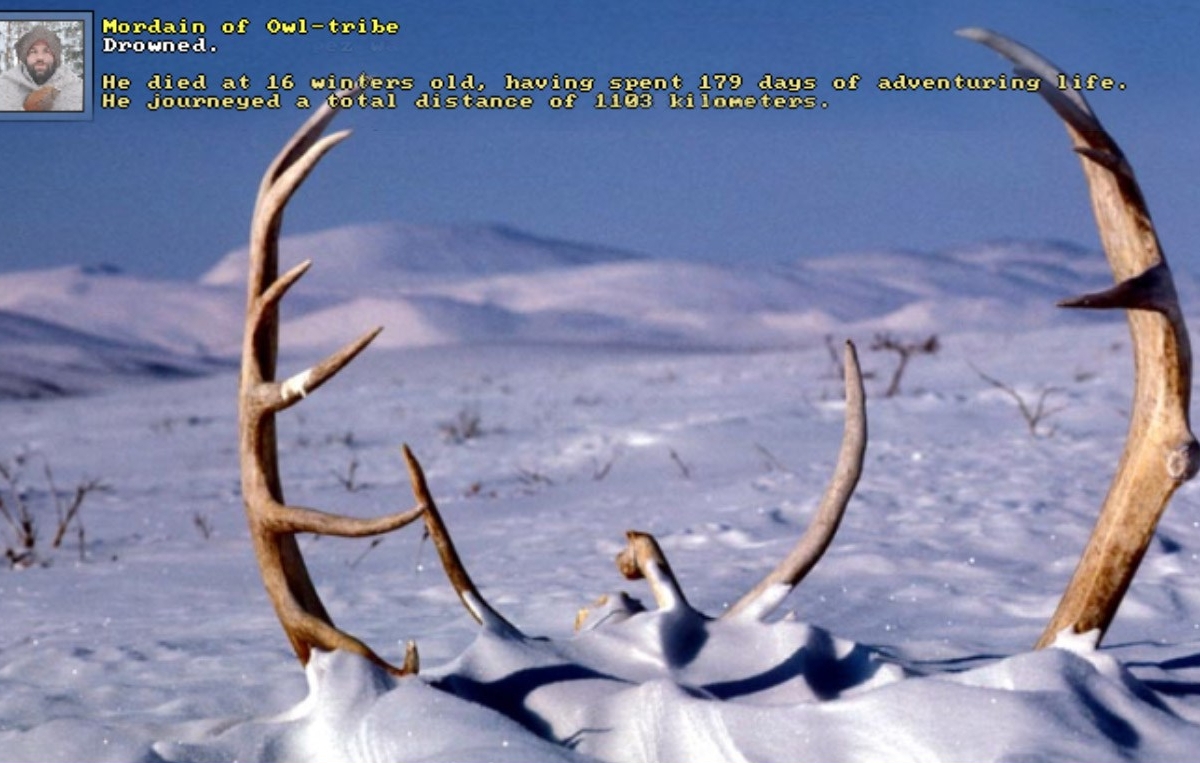 The very night after I posted the blog on my Unreal World character and my experience surviving winter, it came to an abrupt end.

I drowned in icy waters on a search for a cow.

I meant to go to a nearby village to trade items for a domesticated cow, which I would then lead back to my little log cabin with a nice fence pen all laid out.

When I got to the village, they told me about a lost cow that had wandered off and offered me a quest to go find it. Around 7km southwest or something.

Popping onto the overworld map, I stared at the map scale and tried to calculate distances. I guessed it seemed like 70 steps perhaps.

About 30 steps in, I hit a frozen river tile, which blocked my progress. The smart thing to do would have been to pause and labor to build a raft. It was winter, though, so to raft over frozen waters would have meant cutting a hole in the ice with every step, and probably on the zoomed in map to boot.

Subconsciously, I knew that walking on frozen ice was a bad idea. There had been a forum post I read in passing that also swore never to do it again.

Past midnight, I guess one is never thinking straight. Impatience got the better of me and I risked a dash across the ice, just to see how far I might get.

Some 30-50 steps later on the zoomed-in map, ie. not far at all, the inevitable happened. Daring RNG to do its worse with each keypress is never wise. The ice cracked. I fell in.

I scrabbled around, pressing keys, attempting to climb out. Between the freezing cold temperatures and my middling strength stat, it wasn’t ever going to be. I reprised Jack Dawson’s end from the Titanic.

Boy, was that a good way to get me off the computer and into bed, sulking.

I lay there, nursing a ragequit, thinking, well, I guess that’s it, I’m now done with Unreal World. All that effort. All that time. Down the drain in an instant. I fucked up. I forgot to save scum before trying something stupid. My last save scum was real life -days- ago. Start over from that point? So much work to get back to where I was. What’s the point of gaming really? It’s all so ephemeral and meaningless. Win some, lose some. There’s no point to it all. Maybe it’s time to move on to something else. Maybe Master of Magic like I wanted to. Why do I even play games anyway?

Some time in between the twilight realm of wakefulness and sleep, gnawing on the “What’s the point?” bone of contention, I jerked up to pen this before I forgot about it:

This will require unpacking over time. It’s sleep garbled.

Obviously, the point is not the same for everybody.

It’s a very uniquely me thing I’m trying to grasp at here. Perhaps likeminded Bartle EASKs with primarily Explorer motivations and less value on Socializer or Killer aspects might relate. Then again, they might not.

I have a good helping of Nick Yee/ Quantic Foundry Immersion Component in there too.

But after I wrote that down, I dropped back into bed and slept like a baby. Or a log. One of the two.

When I woke up, I was a lot calmer when thinking about Unreal World.

“You know what?” I said to myself, “Maybe it would make a good story. The search for a cow that led to icy death. Maybe it was Mordain of the Owl Tribe’s time to go. The end of his story. Nothing stops you from making up a new story some other time. Now let’s see what other games we can play.”

I loaded up Steam. I stared at the vast array of games on tap.

Somehow, I found myself pressing the “Play” button on Unreal World. Maybe just for five minutes. I could just roll up a new character and see how it went.

He was not as blessed by the spirits as Mordain. There was no free bear. His traps were not as full. His fishing struggled to keep himself fed.

He did build a big deadfall trap, which Mordain had never tried to do. It caught a lynx. Which took forever to put down.

Five real life days later, I have a new log cabin. It’s bigger than the old one. It has more windows. 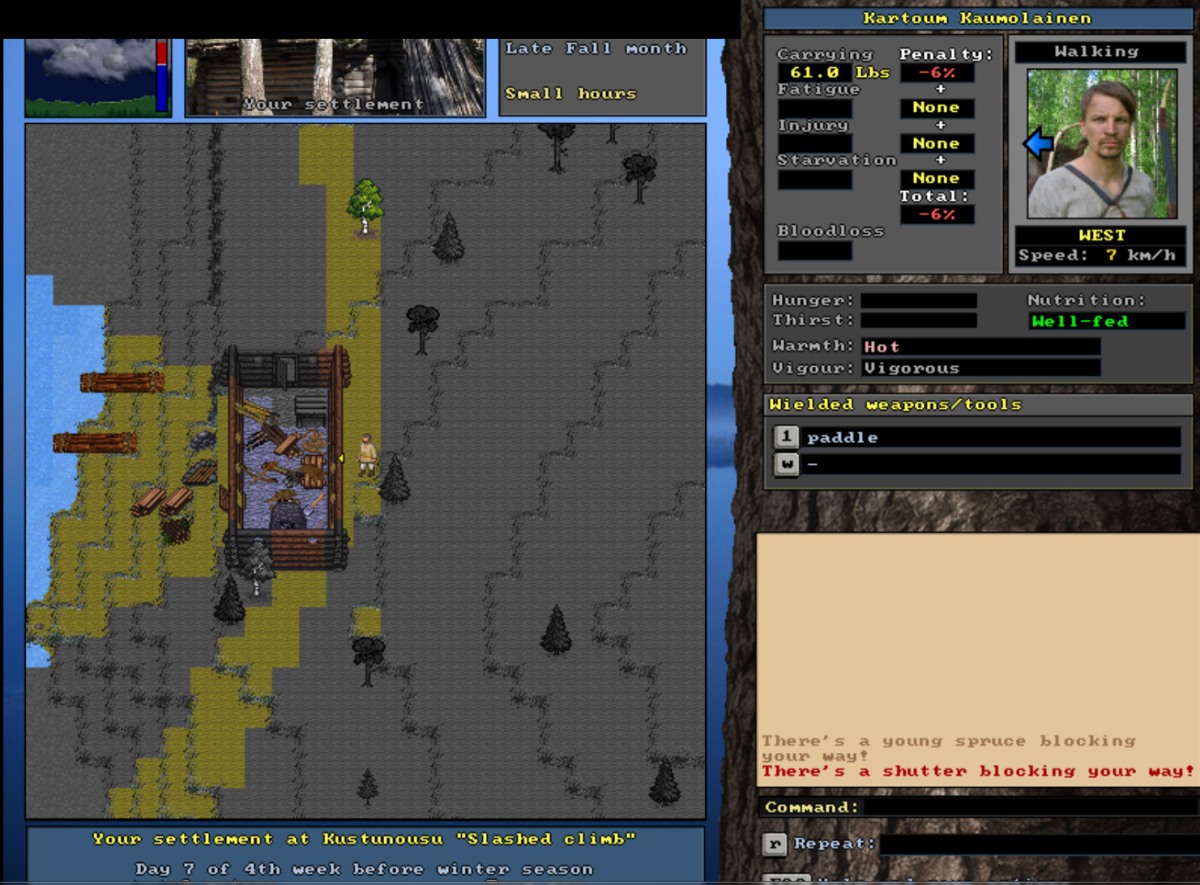 3 thoughts on “What’s The Point Of Gaming? On Unreal Worlds…”