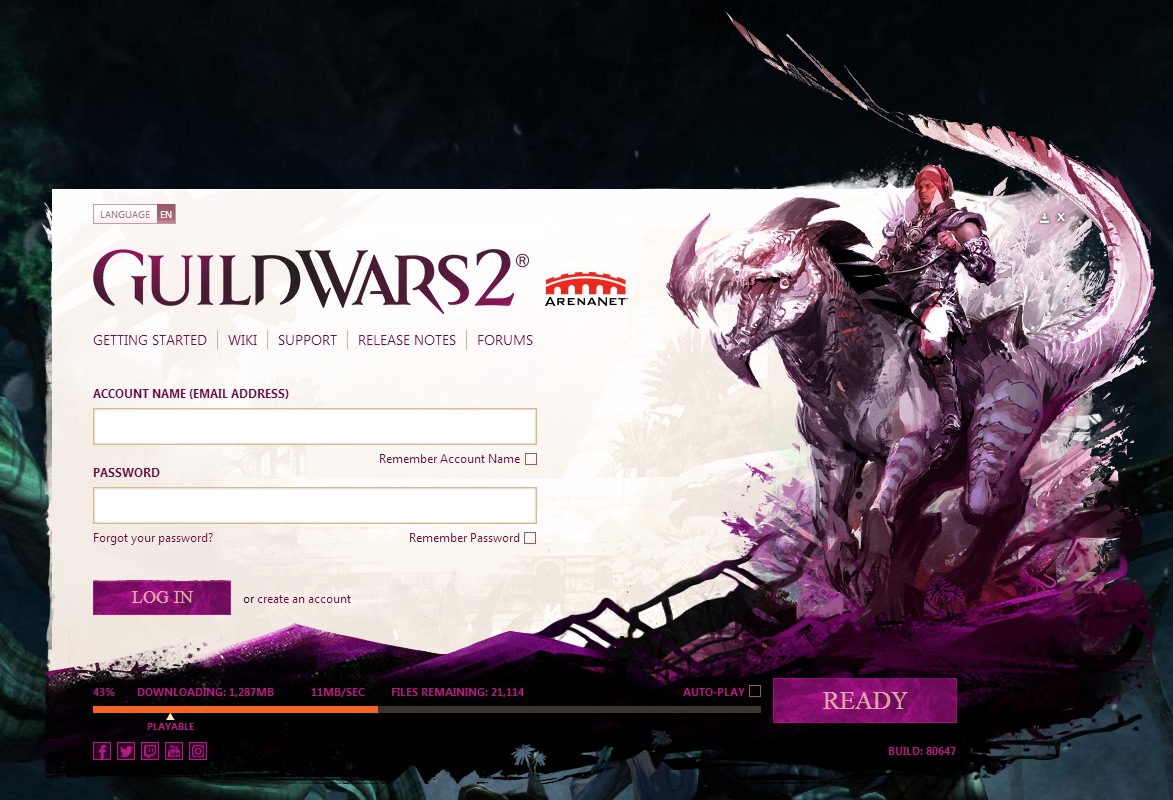 Now here’s something that hasn’t happened in two years or more:

I have two PC games that I am dying to play / make progress on at the same time.

Usually, one or the other is on a downswing and I start getting bored or antsy or grumpy or what-have-you and I take that as a signal to go focus obsessively on some other game instead.

And when stuff is really bad, then I don’t feel like playing any games at all and go read a book, sleep or find something else instead.

With GW2 finally introducing stat-swappable armor into the WvW and PvP game modes, my last major unhappy whine about raids promoting exclusivity through design immediately resolved itself and flipped my mood 100% in the other direction.

Do we still have a partitioning and division in the playerbase? Well, yes, some, that’s been there before raids, further exasperated by raids, and is not going to go away completely, but players like to partition themselves off anyway and seem to be happier mostly playing in their little sub-communities.

(Game design -promoting- siloing though, should be avoided. The point is to keep nudging players out of their little happy zones from time to time with positive carrots, rather than force them kicking and screaming anywhere with a stick; as well as to avoid over-rewarding one partition over another. e.g. Can you imagine the whining if the PvP gamemode got stat swappable armor first?)

DPS meters are a thing now in GW2. That’s another change. All meters are prone to misuse and misreading; but they also bring positive good from an objective numbers standpoint.

One can seek self-improvement measuring one’s own performance or by observing someone else perform at a higher level; others can quietly adjust for a poorer performing player or put them in a role which they can actually do well or passably in, and so on. You’ll see the good of meters happening in the more closed groups, while the PUG scene is, well… it’s a PUG for a reason. Bad mixes with good, and usually the bad sticks more in memory.

Overall, any “bad”, “negative” and “toxicity” components that were introduced alongside raids comes from players now, not by game design, and that is how it should be.

(Are there a few more of those ugly players? Well, yes, but you can’t win ’em all. And more probably came in via free to play being introduced, rather than raids as a feature. If anything, they come in attracted by raiding as a concept and inflict their ugliness on PUGs and the difficulty/wipes scare everyone away even further. Which is a problem for new blood into the raiding scene, but hey, raiders like to be part of closed groups anyway, and we will let that ecosystem play itself out how it will.)

The last still-valid general complaint about GW2 raid design-wise is the sectioning off of some level of story content behind a group-needed, time-needed, certain-management-of-difficulty-required barrier. Plus the insulting suggestion from certain devs to beg a raider to let you walk into an already cleared instance to read what remains.

That personally isn’t a dealbreaker for me but well, it may still be for some.

My last word of caution about raids is the future fear of pushing the envelope so hard and measuring based on super-raid guilds playing at NA levels of ping or using ping dependent mechanics (bullet hell, I’m looking at you.) They can hit upwards of 36-40k dps on a raid golem, and people at higher levels of latency… well, cannot. 30-32k can be a heroic effort and 28-30k while in a raid is pretty darned good already.

Anyway, with legendary armor function now available via two other game modes, it is perfectly okay from a lateral progression standpoint now. You don’t have to raid, you don’t have to PvP, you don’t have to WvW. If you want stat-swapping armor, you can do options 1-3 or all of them as it suits you. You can make a piece here and a piece there, or do all six pieces from one game mode. If you hate all the options, then you live without stat swapping armor functionality and pay one-off costs to Zommorros if you really need to swap stats once in a while.

Players who play any of those game modes for a long time get exclusive cosmetics and titles and minis and toys (finishers, white mantle portal, etc.) as prestigious things to show off, but their characters are not functionally better than someone else who doesn’t do those things. (The players, though, may have functionally improved in skill over someone who doesn’t specialize in that game mode, so that is fair too.)

Anyway, Path of Fire is coming, and with it, the prospect of wide open world zones, more cooperative open groups and new things (zones, mounts, elite spec skills) to discover.

Since GW2 has become all about lateral progression again, I am tempted in multiple directions at once.

OR, I can totally ignore GW2 for the moment and go play Path of Exile.

Which is in a total Renaissance period at the moment, with famous Twitch streamers all zeroing in on the 3.0 patch.

The hilarity of the new maps means I don’t know where anything is, which puts a damper on beelining to the exit, and usually means I end up crisscrossing the map multiple times looking for a way out.

And since I’m constitutionally incapable of ignoring anything that moves when it’s showing up on my screen, that means I kill pretty much -everything- and become super outleveled, if super slow at progressing.

I exploded a few times versus some of the newer Act bosses, but I figure that’s just not being used to the mechanics/animations and not knowing what to do.

(I also had an issue hitting some of the object bosses like Act 5 Kitava and the unpronounceable Spider god Silk was in love with, while using an attack-in-place num lock workaround I read on Reddit. Not exactly the best time to wonder why I couldn’t fire an attack at the boss while the whole room is lit on fire / acid / blood explosions / minions / melee swipes, etc.

Well, just have to understand the bosses a little more, then I’ll be able to deactivate and reactivate stuff as needed.)

Some time in Act 5 or 6, an NPC offered some unique jewels as a quest reward, and the only one that was relevant for me was some kind of buff to zombie AoE attacks. So my 7 zombie entourage (went up to 8 now, but not in the screenshot below) has started “biffing” more than “whiffing,” while still doing their part in providing a wall of bodies.

Said wall lasts long enough for me to fire off Arc a few times, now linked with spell echo among other supports (still 4-linked only, so room for future improvement there) and that usually ends the fight.

I cleared the Labyrinth and picked up Elementalist as an Ascendancy (just didn’t seem to have either the gear or build for Necromancer, maybe another character down the road), and am now dragging along an entourage of dual ice and lightning golems.

I’m using Herald of Ice and Arctic Armor since I had the mana reservoir for it, Vaal Storm Call as a panic button/damage supplement, Vaal Summon Skeletons as panic button/damage number 2, and Conductivity as a curse to up my damage when things actually stay up long enough for me to toss it.

A Raise Spectre gem dropped some time back, and I was idly experimenting with it. It’s really quite something depth-wise, as its effectiveness seems to depend on you picking the right mob for the job and slotting support gems accordingly.

I had an amusing period where I put Lesser Multiple Projectiles and Faster Projectiles in with it and looked for a good ranged attacker to shotgun projectiles.

In Act 5, there was a promising Scholar or Sister or two that seemed quite shooty, but they were really quite slow and my zombies/arc/golems were mostly killing things before they got to the fray to shoot.

Sometime in Act 6, I found my new favorite Spectre to play with in the Axiom Prison, necessitating a whole bunch of support gem swapping.

There is this CRAZY skeleton cage that walks on four legs and has multiple sword swinging hands. I -think- it uses the Cyclone skill. It just likes doing this spinny attack of doom and it is just so bulky. 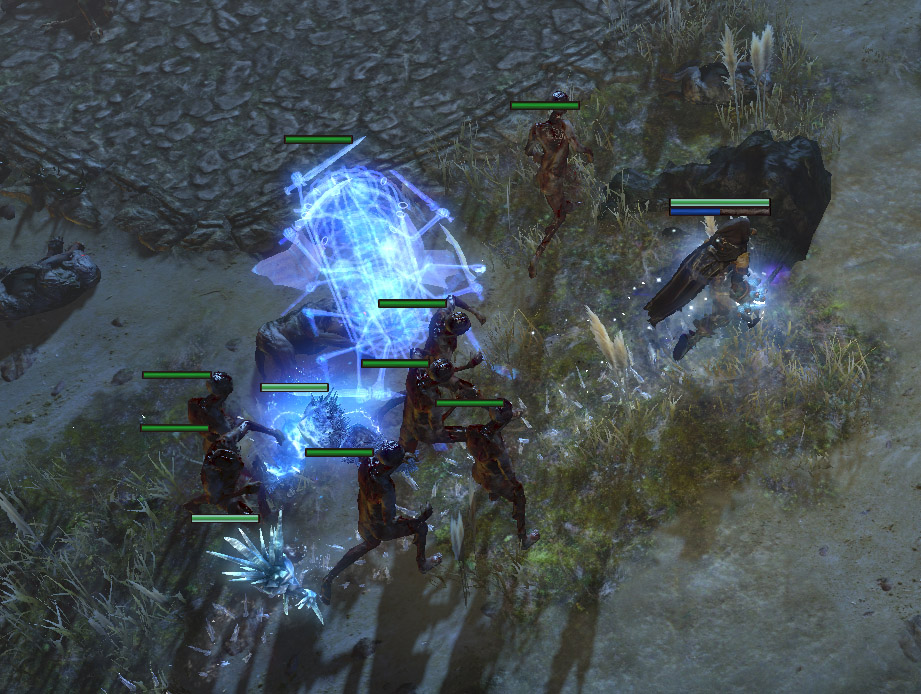 Beyond the odd AI quirk where it sometimes does not figure out where the swarm of mobs I’m attacking are (in which case, they die to Arc), it is pretty hilarious to see it buzzsaw in, surrounded by a pack of zombies.

Shit dies pretty quick, if I left them to it.

And I’m usually sitting around supporting them with a chains-5-times Arc, so that’s even better.

If things stay up, that’s usually because it’s not one group of mobs but like three groups of mobs converged in one place, plus rare mobs, and that’s when the minion entourage really earn their keep, tangling up most of the mobs for long enough for me to run or Flame Dash out of there and then Arc fire into the fray to clean up the mess.

Gear is likely going to be an issue soon – my resistances are all at 50% only, so not great, and I haven’t been actively looking or specifically crafting for gear with serious amounts of life or energy shield but just randomly picking up what works – but we’ll cross that hurdle when we come to it. (I seem to recall level 62 and 72 as the levels where I start having to worry about passable gear tiers while on the way to the top tier.)