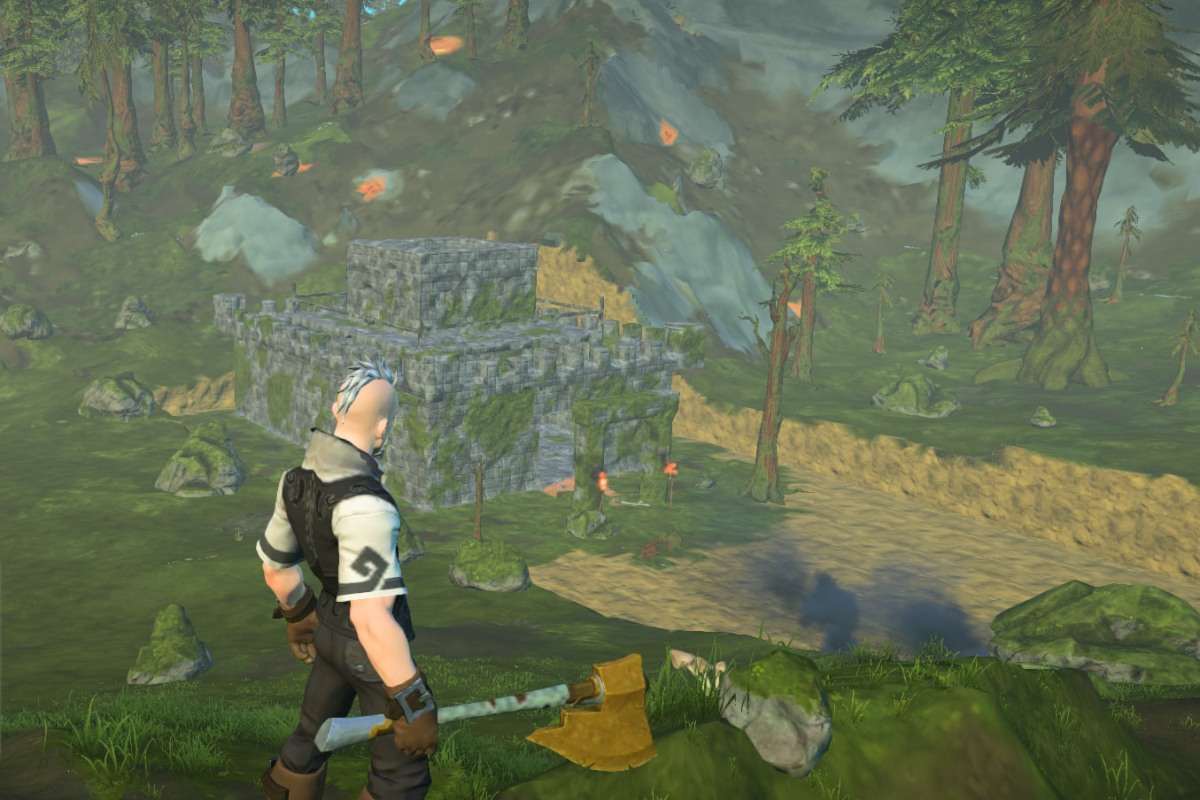 Landmark is called a “social building game,” and at this stage of closed Beta, where the floodgates haven’t -quite- opened their way to allowing in bored griefers, many people are still in a civil and cooperative communal mindset.

(Though I hear some people are trying – digging holes around people with excavators, kind of pointless when the “victim” can grappling hook out or evac to safety or even log out and switch servers as a last resort or following people mining all the ore before the other can get to it, a shared node system wouldn’t work here, I guess, so I’d jump servers as a solution, methinks.)

Being in a nomadic frame of mind and needing heartwood to build the stations on my claim before I could settle in, I thought to pop by and surprise visit an MMO blogger and chop trees along the way.

The easiest one to track down was Syl (#totallynotstalking), mostly because she helpfully included a picture of her claim location on her blog , with nearby Portal Spire as easy point of reference – and provided server and island in there too.

Besides, her Twitter said she needed dirt, and I had tons of it from OCD mining.

The pause time between actions is noticeable. Not completely unplayable, but not that great either.

It’s fine to visit with, or engage in very solitary and slow wood-chopping or mining, but it does feel more molasses-like than usual. (And I hit 220ms on US servers, so lesser of two evils, really. I’m not sure if I can still play Landmark once hostile monsters and/or PvP is introduced, if optimization doesn’t happen.)

After randomly visiting a bunch of claims near the Portal Spire in slow motion fashion. and grumbling to oneself about how lucky Syl is to have a public works guy right on her doorstep (no loadscreens required,) I finally tracked the place in the screenshot down. (Fun self-created explorer minigame, though.)

From prior WvW experience, EU prime time happens right after SEA prime time, so I figured it’ll only be a matter of time. MMO bloggers being all excitable about Beta launches and all that.

I didn’t quite want to wait around in a 360ms world though, so I popped out and switched to a US server. Confidence, since it was turning out to be home. It was kind of fun to walk around the same area and see how different the same map was, due to the presence of different players.

Syl’s mountaintop was unclaimed in Confidence, but stumbling down a steep mountain into a valley, I came across a moss-covered fort.

The owner was home.

As I walked up to check out the place, he came right up, said hi, and offered a Mithril Pick and Rubicite Axe completely unasked for.

I love those generous-minded sandbox veterans.

I was a bit puzzled at how he was willing to give away the top tier pick and axe, but as it turns out, after more closely reading the forums, these items have a random quality assigned to them when first crafted. And it’s a pretty wide quality range. Truly obsessive individuals end up randomly rolling more than a few times for the really good stuff, I suspect, and end up with a surplus of didn’t-quite-make-the-cuts.

And since it’s not (yet) possible to salvage the items for any return of materials, the only options left are hoard ’em, trash ’em, or give ’em away. Which makes newbies pretty lucky if they socialize with an older player.

I do enjoy observing veterans at work in these crafting sandboxes. You learn so much from what they are doing.

In A Tale in the Desert, I picked up by osmosis (just hanging out around more experienced players) things like scaling up the number of machines operating at one time in order to give higher returns, where to put various buildings for more synergy and efficiency without having to run around, and so on.

This fellow had a most intriguing board.

My goodness, it was like he had a premade set of voxel paintbrushes to work with.

“You mean it’s possible to get shapes like -that-?” was the thought that ran through my mind. “I gotta look into this building thing more. I need those frickin’ building tools.”

So that was next on the agenda after the Syl visit was complete.

Run around, mine tons of tungsten, finish the set of building tools. Good thing I set a claim in a Tier 3 desert, so I did that while at home, so to speak.

And as of right now, Landmark is the only place you can do in it.

But it was made with no prior reading or watching of any guides or tutorials, just trial-and-error learning with all the building tools available.

I hit a self-learning limit with this guy’s (lack of) beady black eyes, so next sandbox goal, watch and read all the available building tutorials on the Landmark Wikia.

I won’t spoil it for any of you here, but I do suggest watching at least the basic ones once you’ve got experimentation out of your system.

There are some fairly unintuitive keyboard commands that I would -not- have known about, without watching them.

I think I hit one of them accidentally, yielding a fairly awkward voxel size range, and could have used the other when trying to make the pathetic little arch.

Ah well, so it goes. It’s a learning process.

And the fun of these sandbox crafting games (at least for me) is the stuff that’s unique to the game in question, that learning curve of devouring information and applying it, until one groks all the systems in play.

The only thing that I can’t quite shake off though: I feel like I’m learning how to be a 3D graphics artist for SOE, working free-of-charge. On my leisure time.

(Though granted, they’re probably eyeing other folks’ creations that are much less amateur-ish than mine.)

What am I getting in return here? Bragging rights? Showing off pretty screenshots to my friends? Maybe possibly a trickle of Station Cash if another player decides they like the stuff I make – and presumably only a very small percentage of real artisans will achieve that level of demand?

I don’t quite feel that way in Minecraft, where all block creations are exchanging about freely and exist on maps that one can save, whereas I just keep feeling a big corporate specter of “we own everything you’re making here” looming over me in Landmark.

User-generated content may be a bit of a double-edged sword. Players entertaining other players, selling and trading with them, while big brother takes a cut because one chose to do it with the tools that big brother made.