Okay, I’ve made fun of people that bought a $25 vanity mount before.

A $10 mount for low level convenience I’m more inclined to understand, though I’ve never felt the urge for a show-offy type of mount when a cheap one goes just as fast, doesn’t run out and still gets you there in the end.

On the other hand, a $10 mining pick sounds more than a little ludicrous on the surface.

To boot, it’s for one character only.

But I keep thinking of all the mining nodes I tend to skip over because I can’t bear the thought of juggling between mithril and orichalcum picks, managing multiple picks in my inventory, having them run out and having to stop to buy more, and there is a strong buy once and ferget about it temptation.

Then there’s the visual theme.

I first realized I was a bit of a closet pyromaniac when I made a fire/fire dominator in City of Heroes and just -gelled- with throwing fire EVERYWHERE.

I went down the Hall of Monuments hardcore to reach the Fiery Dragon Sword before relaxing on the remaining points because OMG, it’s Rurik’s sword, on fire. It must be mine.

First main in GW2 had to be a class that could wield that damn sword.

And I was probably a sword/focus guardian long before it was cool (or at least recognized to function decently, there was more greatsword love earlier on,) all because I refused to give up that sword. IT IS ON FIRE. That is all I care about.

It also helps that a guardian is capable of throwing fire (it’s blue though, sad panda) around, and Blood Legion charr get to wear red armor thematically. 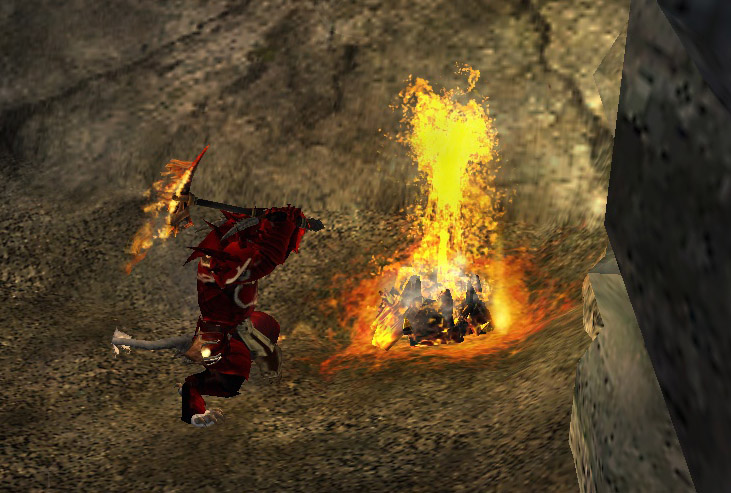 I am now $10 poorer, but I sit around having a pyromaniac orgasm every time I mine. Hell, I make a point of running to the nodes now just so that I can spurt lava.

Why not spend it in gold like a bunch of people are doing (judging by the rocketing currency exchange rate?)

Alas, I don’t run dungeons on a daily basis, and even the thought of repeatedly farming them makes me vomit. Nor do I have auction house mastery, so I am poor.

I’m just glad that the TP exists, because I end up converting rares and unidentified dyes (and a few other random stuff I farm) to gold, and I’m sure I’m a recipient of some of the dungeon farming cashflow that way. I make enough to get by and maintain a bank of 50 gold thereabouts, nothing earth-shattering in terms of riches.

So it’s easier to just pay up $10 for the 800 gems than destroy half my gold savings.

If you’re counting, that’s $20 this month, slightly more than a sub’s worth of money. I did manage to avoid Wintersday spending though, so it’s all good, I guess.

I’m a little less keen on the one-character only thing, but I can understand why Anet did that.

Anyhow, I figure I probably PvE roam and farm with only one main (who has the magic find gear.) Map exploration on alts is already a daunting enough task. Karma bought orichalcum tools do function just fine, and I have karma out the wazoo from too much WvW, even before the jugs of liquid karma from dailies.

It’s the multiple inventory slot space taken up that I can’t really stand.

Good not to have to worry about it on one character at least.

Just preferably not this month please.