Here’s a whirlwind screenshot tour of the rest of the Wayfarer’s Reverie: Tyria.

Picturesque minotaur corpse contributed by a friendly volunteer who jumped me with heroes flagged away, while I was in the midst of waiting for snow wolves to wander into the frame. None of the wolf shots were too great, but he was perfect.

Makes me want to scream “Dovahkiin!” at the top of my lungs. Yes, it does. It’s no Throat of the World, but comes pretty close.

Again, the tiniest of immersive details struck me while in the snowy landscape. Your breath mists.

There’s no real game reason why one would need to establish that this map is cold, snowy and that you’re at high altitude. Who the hell turns to look at their mouth while coming across and fighting a swarm of red dots  every minute? But the detail is there anyway.

If you are still, as I was, with the interface hidden away and waiting to take a screenshot, you may also notice, as I did, that the trees in this area move. They sway ever so subtly in the wind.

I truly wonder how much subconsciously this creates an impact in our minds, that leaves us with the impression that this landscape is… hyper-real, almost, with that beautiful fantasy acrylic painting look.

I wonder how much of the overarcing story was known then during Prophecies. Whether he was just a random NPC in a teeny outpost that someone later decided to give extra meaning to, or if he already had some manner of grand destiny from the get go.

I managed to stitch two screenshots together (somewhat) to show The Falls from top to base. It’s nice, but honestly, imo, not worth the trouble to get here. The jungle sucks, with all that necessity to double back and climb on non-obvious tree trunks to get from place to place. There’s a better waterfall in Pre-Searing, if I recall. Perhaps we’ll go there one of these days.

Cool immersion detail: check the featured image of The Falls at the top of this post to see the little carnivorous plant in the lower right corner. Jungle. So yep, carnivorous plant. Flytrap of some sort, no doubt.

If you ask me, these are much nicer to look at in the jungle areas. I keep wondering what they are. Are they the alien dwellings of some strange race in the jungle? But you don’t see much of anything besides lots and lots of spiders, scarabs and oakhearts.

On the other hand, they are distinctly plant-like, they look like they’re growing from that gigantic root/stem/branch thing, and have sundew like structures on the “roof.”

In this jungle of carnivorous plants, have these things adapted their traps to capture -humans- that wander in, attracted like moths by the light, seeking shelter?

Off to the Ice Cave to find the Temple of Lyssa.

Interior of the Ice Cave. What a stark contrast to the outside.

ArenaNet is in love with god rays, but you gotta admit, they use them to such stunning effect. 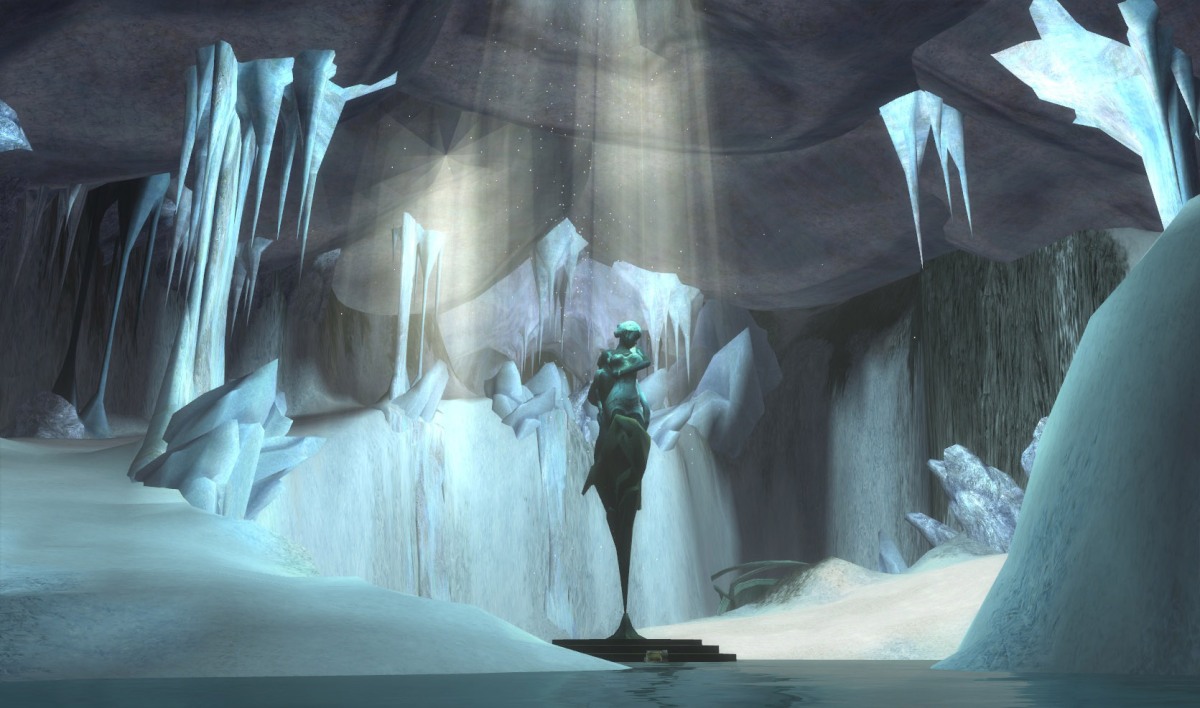 I couldn’t resist jumping the Ice Beast at the back of the cave, and it took some wiki’ing to remember what the Spectral Essence it dropped was for. Oh, armor infusion! How long ago it was since I needed to worry about that. I normally infuse with the story mission, but it was good to see there was an alternative.

Cool detail moment. Besides an awesome story on the altar:

And it was, that a stranger came to the village of Wren seeking shelter and employment. Though young in years, her body was stooped and twisted, her flesh eaten by disease. “Ye have the mark of plague upon ye,” said the citizen named Gallrick. “Leave this place lest you sicken our people.”

“I’ve lost my family and my home,” cried the desperate woman. “Have you no heart?”

Yet each person, in turn, did look away.

Then from the crowd came a young woman, Sara. She looked upon the woman with pity. “If you need help,” said Sara, “I will give it.” And Sara did approach the gnarled, bent woman and did offer her a helping hand.

Then the sickened woman pulled from her body the robes of plague, revealing Herself to be the goddess Lyssa.

The people of Wren fell to their knees, begging Lyssa’s mercy. But lifting Sara gently, saith She, “True beauty is measured not by appearance but by actions and deeds. Many have eyes, but few have seen. Of all here, you saw the beauty behind the illusion. And you alone shall be blessed with My gifts.”

Scriptures of Lyssa: 45 BE

I knelt to invoke the avatar of Lyssa, since I couldn’t remember what it looked like any longer.

Well, it morphs. From something feline-like, to that of a woman’s face. And suddenly, I realized that the face on the pillars that I wondered about two or three posts earlier, well, it’s probably Lyssa. Perhaps this was a ruined temple of Lyssa’s once upon a time. 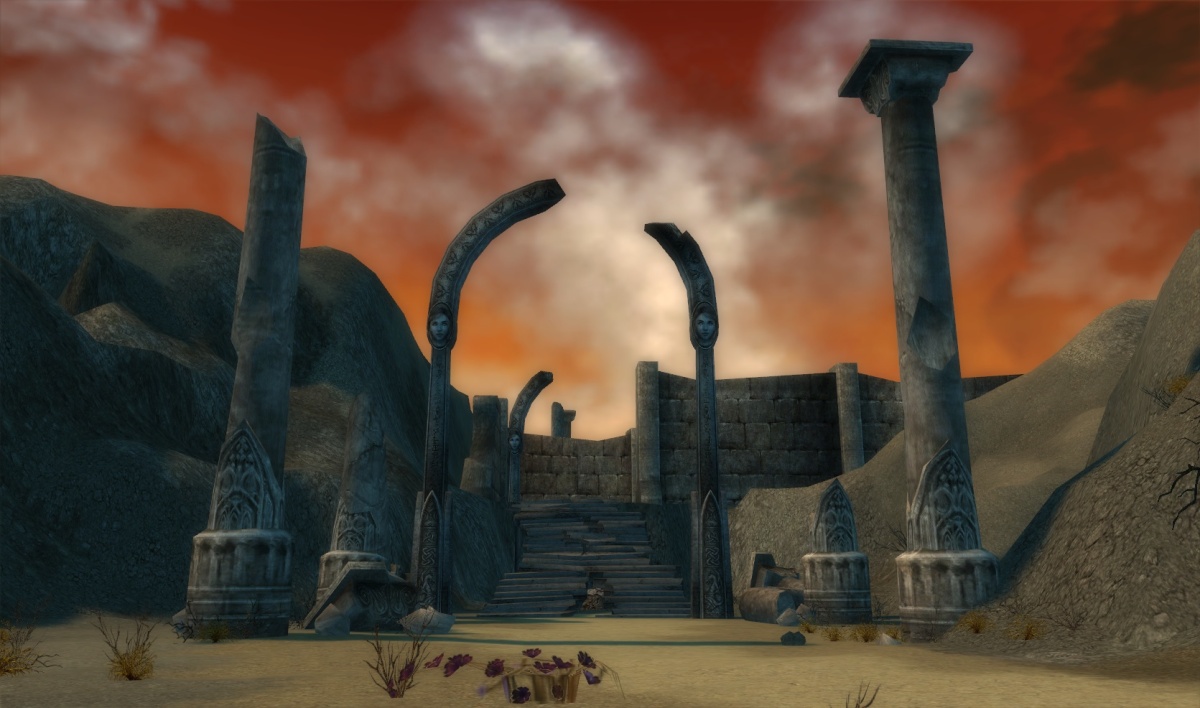 Coming up, one of my favorite places in Tyria, the Arid Sea and the Crystal Desert.