It was around five years ago that I watched one of my work colleagues mess around with Mob Wars.

Being somewhat of a privacy and pseudonym advocate, I already eyed Facebook with great suspicion and wasn’t at all inclined to give “Facebook games” a fair shake at all.

“Is that it?” I asked. “You just click buttons and watch progress bars go up?”

That didn’t seem much better than Progress Quest.

Hell, Progress Quest streamlined all the unnecessary clicking for you (moar efficiency! mouse button spared!) and you just had to sit back and enjoy the concept of gaining xp and getting your next level up and becoming numerically stronger over time.

Then there was the friends spamming problem, aka How to Ensure You Have No More Friends in a Hurry.

Wanna be stronger? Click this button to invite all your friends to join you and play the game!

Ah, social networking, aka inviting spam from friends into your life.

One naturally thought ahead a few steps. a) I’m an introvert, I don’t make as many casual friends and acquaintances as an extrovert. b) It seems extremely rude and crass to spam all your real life friends with an invitation to a “game” made for low-impulse control individuals to part with their cash. c) Therefore, I’m never going to have as many allies as someone more connected will. d) Therefore, they are going to outnumber me and gank me whenever they want.

And of course, there was the disreputable pay-to-win aroma wafting off a cash shop selling virtual items for insane amounts of money with no more effort that inputting a few numbers on a spreadsheet. At least for cosmetic options in MMOs, some artist had to slave away at a 3D model and spend time making it look good.

This very quickly led down the Wargames scenario of the only way to win is not to play at all.

And boggling at people who still were ignorant enough to play anyway.

Cycle ahead five years, and strangely enough, I find myself dabbling away at one of its variants.

Concept-wise, it’s quite alluring thematically. You’re a pretend gangster building up a mob of your own, conducting a variety of virtual crimes across the globe with a click of the button, rabble-rousing and doing the equivalent of a drive-by shooting with your homies on some other unfortunate mobster. 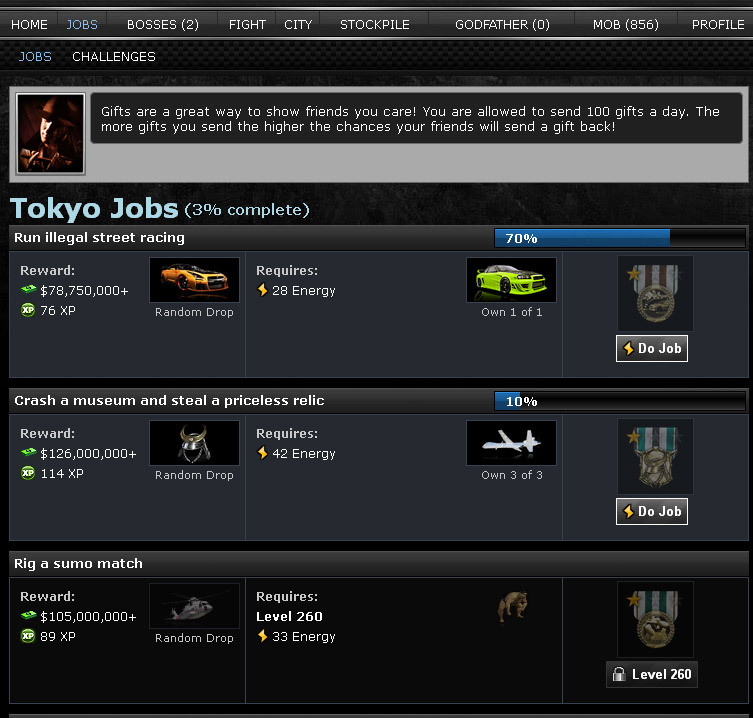 (Nevermind that that mobster has friends of their own and may just come after you in a nuclear escalation scenario where there is no winner. We won’t think ahead that far.)

What made it suddenly more acceptable to experiment with?

Mob Wars: La Cosa Nostra has made it onto Kongregate. Yep, the social gaming site of 1001+ flash games.

Now your real life and your game accounts don’t have to mix.

Furthermore, having the backbone of connected Kongregate gamers with chat rooms makes it easier to get around the “friending” hurdle.

Yes, some time ago, I learned from Tobold that it is indeed possible to make a fake Facebook account for the sole purpose of playing Facebook games, find websites and forums where you can find a load of like-minded people sharing codes and add all these ‘fake friends’ to mutually help each other out.

Except that seemed like a ridiculous amount of effort to go through to play a not-very-good game to begin with, and Facebook could fry your account any time they felt like it, erasing any and all progress and time invested.

The advantage of fake friends, of course, is shared interest in only one thing. The game which you are currently playing. It’s pretty much like a casual pickup group where you don’t know at all who these people are, except that everyone is interested in getting to the end and getting loot. And that’s good enough for everybody’s purposes.

Maybe you’ll encounter some of them a few more times over time, and get to enjoy their company and become real friends, but for now, strangers with a shared purpose is okay.

Kongregate shortcuts that process by allowing you access to a network of people currently playing that very game. The chatroom fills up every so often with random alphanumeric letters that an observer on the side might think are bots speaking in tongues or unwanted spam, but the players tolerate non-repeated chatcodes because each is a potential ally for someone (perhaps even yourself. After all, the maximum limit of fake friends starts at 500 and goes up to 1000 as you gain levels.)

What this does for me is provide a certain amount of equity. Every player has access to these codes. Depending on how lazy or obsessive they are, they can cut and paste every code they encounter to accumulate their game allies or not.

The other thing they seem to have improved with the La Cosa Nostra variant is the pacing. According to the Wikipedia article, the rate of xp gain is sped up. It’s quite normal to gain at least one level a day, and most likely, more. This gives Achievement seekers the kick they are looking for when they play with incrementing progress bars.

As mentioned, I don’t have much Killer or Socializer interest in me, so how long I stay engaged with the thing is debatable – the “whole prey on people weaker than you, get arse kicked by people stronger than you, group up for safety and to gang up on others” concept doesn’t hold long term appeal for me.

But the Explorer in me is actually surprised to find a certain amount of depth where I initially assumed was none to minimal.

Where there are numbers, there are efficiency calculations.

And boy, are there a lot of numbers.

Is it better to pick this job for the energy spent and the return, or that other job over there?

You buy property for an initial cost, that gives you a return over time. Which one do you buy? How many?

Your total combat strength is made up of both your avatar carrying a loadout of weapons, armor and a vehicle and your fake mobsters using a stockpile of weapons, armor and vehicles that you have accumulated. And all that stuff is collected via a variety of different means, from crafting to loot drops to buying it off the store (via fake money or real money.) Certain items obtained quite easily have an upkeep cost that eats away at your in-game wealth over time, making it tricky to afford good combat stats.

Each individual players’ failure to master various aspects of these numerical calculations lead to holes one can take advantage of when attacking them.

Oh no, does this mean the game is doomed from an eventual attrition of sheep getting tired of being mauled by wolves?

I don’t know. Perhaps. But there are some pretty elegant mechanics in play. Tired of getting attacked constantly by someone stronger than you?

For a cost, you can set up ambushes to dissuade the other party. When they attack you, you get a 100% defence boost, which tends to really help you out. Except that cost is calculated based on how much property your opponent has bought, so some people can be much more expensive to ambush than others.

To add on to those fun nuclear escalation scenarios, there is also the hitlist. The other guy not getting the point? Well, place a bounty on his head. There’s bound to be -someone- else out there that’s stronger than him. Hitlists appear and vanish in seconds as they’re snatched up by people looking to increment achievements. Nothing like getting ganked to stop a wannabe ganker in their tracks.

What? Is the other guy hitlisting you now? Rig his ignition to stop his hitlisting of you, in what appears to be an equivalent of Ambush to counter the basic Attack.

What seems to end up happening most of the time is a mutual avoidance of this nuclear escalation, which is an interesting study in micro-politics.

When you run out of health, you drop into the hospital and are hidden from all attacks besides a very weak punch. Few people tend to bother you there unless they really have a hard-on for killing you dead. Most people tend to back down away from fights in this manner.

Everyone understands that a bunch of attacks will happen because people are trying to level up and fights give points for what are essentially guild dailies – fill a certain progress bar each day to contribute to your guild aka syndicate. You deal with it and/or work to be less of an easy target.

You get the most xp when fighting people that are very close to you in combat strength, which subtly steers most people away from ganking very weak targets unless there’s nothing else left to hit.

I understand that some people even form leveling buddy pacts where they mutually agree to keep hitting each other and healing up so that each can gain xp. One such wordless exchange got me an inroad into a guild I was trying to join. Happened one of the officers was in a position to keep bashing on me. I -could- have ambushed him to get him to stop, but what the hell, that’s not going to make him like me very much, is it?

So I healed up, let him keep whacking on me for xp, and whacked back a few times to get -my- xp in because he didn’t have sufficient defence to counter my attack either. All in all, over a day or two, he got some 150 attacks on me, and I got 50-75 attacks on him. This in a period where most people hit 5-9 times and stop because the other guy has vanished into the hospital. After that, I got an invitation to join him as an ally, and an invitation to his guild because he was impressed that I didn’t back down.

Uh, okay, whatever works. I was kinda letting you hit me for xp while I got some xp off you, but I got the guild invite that I wanted, so that’s cool.

The other thing that tickles me immensely are the limited phrases you can choose when sending a message to someone that is not your ally. If they are in your mob, you can type whatever you like to them. If they aren’t, you get to select three phrases from an interesting range:

There does seem to be leeway to construct quite a variety of messages to get a basic point across, but minimizes spam and abusive trashtalking while still allowing for -some- trashtalk if you are so inclined to pick a fight. And you can also ask them to join you as a Mob member so that you can better communicate with them and so on.

New players get 30 days of protection where only people within a certain level range can attack you and vice versa. I’ve yet to see what the atmosphere will be like with this protection off. Should be interesting.

At least for a while more.

Amazing what even something so basic and not really ‘game’ can offer for interesting ideas. Some of the solutions and interactions they’ve hit upon may have some relevancy to how people might interact in PvP sandboxes that aren’t just FFA all the time.

Anyway, it’s something to do while waiting for Tequatl for 45 minutes.