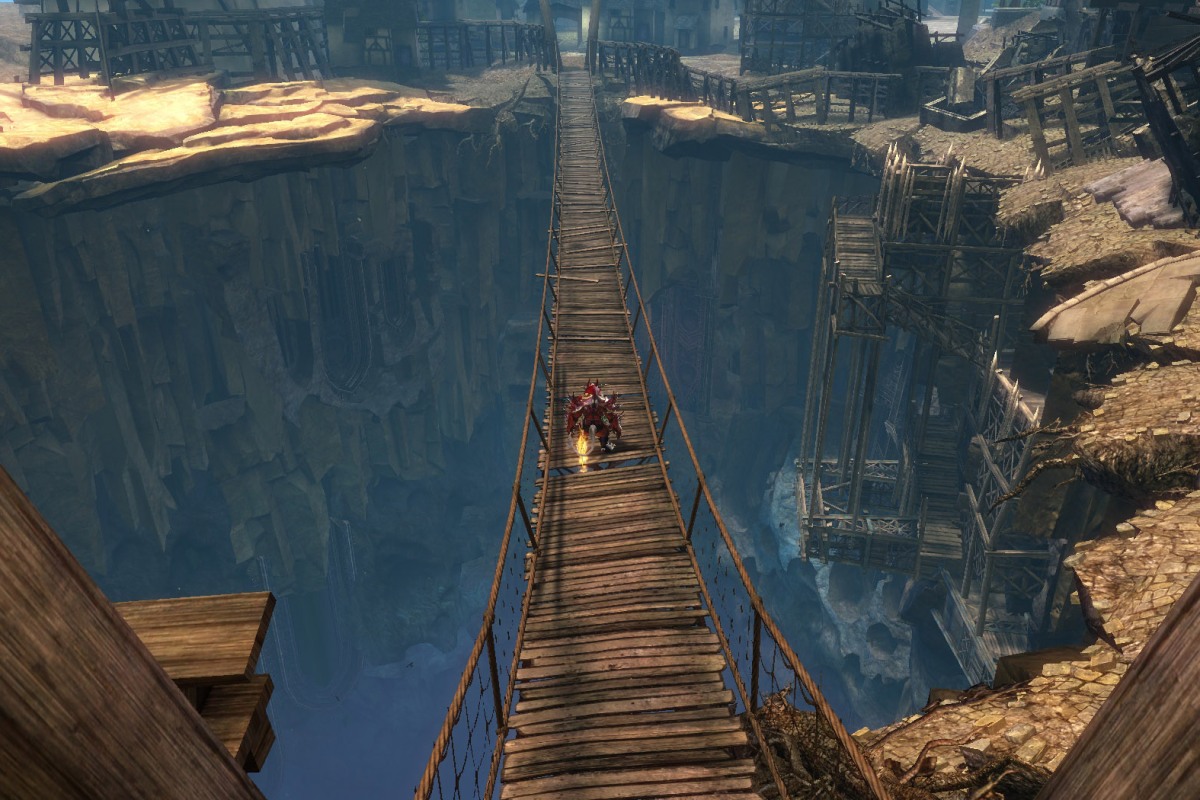 Last night (or midnight, rather) I was idly listening to the GW2 Gamescom livestream and the panel that was mostly a recap of what we already know about Heart of Thorns and a lot of advertising to new players about how NOW is the best time to join the game.

No sub fee, buy one expansion and get the base game for free and available to play right away, probably the nicest community you’ll ever meet in online gaming, totally respectful of your time – if you want to play PvP, you can just jump in direct and immediately play without having to grind for stats in PvE; if you want to take a break for several months, you don’t have to scramble to “catch up”; beyond leveling to 80, you’ll be pretty much equal to any veteran player…

… albeit, one of the developers hedged, without the three years of gameplay experience that a veteran has.

It’s that exact skill-based knowledge/practice/experience gap that will absolutely guarantee that a new player stepping into PvP will get his face wrecked for at least the first few matches.

It’s that gap that lingers in the back of my mind casting doubts, even as I try to assure and encourage new players that the design of Guild Wars 2 puts everyone on a stats even playing field, letting friends downscale down to accompany those newly entering Tyria and still face a challenge, rather than blowing everything away with a sneeze.

It’s the gap that I suspect separates the veteran dungeon “elitists” who just want to earn four dungeon rewards in the space of one hour and not have to explain every last nuance to an unending stream of evidently-no-clue-what’s-going-on newbies from the regardless-how-long-I’ve-played-the-game I’m-still-nervous-about-grouping-in-dungeons-because-I-lack-that-specific-amount-of-repeated-practice crowd.

It’s the gap that tends to yield a very common behavior – just like Wilhelm experienced from his daughter when first starting out in Minecraft – an almost condescending god-you’re-so-slow here’s-the-RIGHT-way-to-play-this let-me-just-play-the-game-for-you impatient attitude.

People often forget to be patient during the learning curve, and to give others that space to learn at their own pace.

It’s often made doubly tricky by the fact that different people learn at different paces and like different styles of learning – one may be happy being spoonfed answers and fast-tracked to success, another may find it overwhelming to be a) fed too many answers too fast and smothered with handholding or b) fed zero answers and left to scramble around lost and frustrated.

(I’ve no solutions to the above besides the suggestion that the learner should take control of their own pace of learning and speak up if they’re overwhelmed – “Slow down! Hang on! Let me figure this out on my own!” or “Halp! I’m lost! Tell me outright what to do now!”)

But despite the existence of the gap, I’m of the mind that the stats-even playing field is still the best bet.

After all, what is the alternative?

Vertically progressing stats tend to WIDEN the gap between the veteran and the newbie, assuming they play at equal rates, one starting later than the other.

Not only does the veteran have more knowledge/practice, aka “skill”, they have numerical superiority on their side in terms of levels and stats and combat performance.

Err, no. That doesn’t help things.

The newbie only has the hope of “catching up” with the veteran if the vet stops playing, and that can also happen skill-and-knowledge-wise too, stats or no stats.

A stat reset with an expansion, leveling the stats playing field temporarily?

Well, this might help, if you only care about the people -currently- playing your game.

Basically the field temporarily equalizes, beginning a new race among current participants until the disparity begins to widen out and the gap makes itself known once again.

As for those that took a break, well, tough, you’re left in the dust. Not very encouraging motivation to return, is it?

Ultimately, one is probably better off just making sure that playing field -stays- equalized at all times.

How about sloping the field so that the newbies tumble down to where the veterans are at?

That is, making it easier and easier for the newbies to “catch up” to the vets.

I suppose this is what WoW has been doing for several years now, speeding the process of leveling, making ‘on-par’ gear a lot easier to get ‘now’ as compared to ‘then,’ and so on.

One does run the risk of pissing veterans off, the ol’ “I ran uphill in the snow at midnight to attain the same level of success, and here it just falls into your lap, bow-tied and gift-wrapped” protest.

And I don’t think it actually addresses the core issue of learning the knowledge and getting the practice required for competency or mastery. It probably makes it worse, because of less learning time experienced before getting on-par stats-wise.

But there are issues there as well.

One is player acceptance, especially from a ‘fairness’ standpoint. For instance, I still really think the present downscaling in GW2 is more than a little borked, mostly because the vet also has access to characters of that level range and can probably game/twink to better performance results over a true newbie or a downscaled level 80 character.

Another is incentive and reward structure. MMO folks tend to only willingly do something ‘harder’ and away from the path of least resistance when there’s something in it for them, that they -want-.

I think a key aspect is autonomy, is the choice to experience something harder within the player’s control?

I didn’t have issues with GW1 hard mode at all, for example. I knew it existed, I sometimes played on it, and mostly I chose not to, because I preferred the easier feeling while traveling through the world. I’m sure others switched immediately to hard mode and never looked back.

The increase in fractal levels appears to be something along this front, allowing players to voluntarily pick their difficulty level.

It’s what I do in Trove too, I try to find that point of flow where it’s not super-easy and unrewarding, and not super-hard to the point where I’m spending ten minutes beating on one boss monster. (Might do it once to say I’ve done it, but not a productive use of time otherwise.)

The last flaw in the sloped playing field is that of separation and exclusion.

That happens naturally. You must be ‘this tall’ to ride or pass that obstacle. Not skilled enough? Guess you can’t do this or that ‘hard mode’ then. Folks that can will tend to segregate themselves away from those who can’t, posing an ever-increasing dilemma of how in the world can those-who-can’t ever learn or cross the gap then?

I suspect the gap will always be with us though.

It’s the nature of the beast, humans are learning creatures and someone who is an old hand at something will always have an advantage over someone coming in brand new for the first time.

Perhaps where we need to focus on is not so much the threat of the gap, but the threat of words like “have an advantage over” and the impulse to segregate into exclusive silos.

And that, I believe, is where the perfectly flat playing field does its best work, if accompanied by incentives to cooperate and form open, loose communities.

If you’re not competing head to head versus each other, or if success is not hinged on 100% top-of-the-line 24/7 optimal performance from all participants, the fact that one player is somewhat better than another becomes less divisive or disagreeable.

Player B may be contributing less than player A, but hey, they are still contributing, and depending on how the game tweaks matters, the combined rewards for player B’s mere presence might benefit all.

Being even stats-wise reduces the number of hoops player B has to jump through to reach equivalency with player A, they just need to focus on the actual knowledge accrual and practice that player A has, rather than spend hours grinding from Tier 1 to Tier X.

The one critique that I can think of regarding this goes like so: “What if Player B is incapable of gaining the knowledge and practice of Player A?”

Vertically progressing stats would give Player B the ‘hope’ of matching Player A’s performance, if he or she puts in the time required to obtain better stats than Player A.

(We are, of course, assuming that Player A doesn’t use that same time to improve stats-wise, staying on-par or even getting better in terms of stats, while still staying ahead in terms of knowledge and practice.)

I guess it boils down to what we value. Especially in our games.

Is it more respectable for someone to be better than another person, due to having more knowledge or practice at something? Does it feel ‘fair’ as in “beaten fair-and-square?”

Is it worth more respect for someone to be better than another person, by clocking in the hours and ‘showing up,’ regardless of actual productivity or performance?

Is it worth more respect, even, for someone to be better than another by the virtue of how much real life cash they decide to put into a game?

Are there other measures of a person, beyond skill, time and money, that we are, for now, not really quantifying or rewarding – such as the person’s actual character (as in character development) behind the avatar, or attitude, or sportsmanlike conduct, or sociability or leadership or ability to be a community nucleus and pull in others to work and play as a team?

Perhaps we should support more games which are cognizant of and in congruence with what we value, and less of those that do not.

Maybe we need to be less obsessed with measurement altogether, less concerned with a gap that’s always going to exist and ranking people on this side as ‘better’ than people on the other side, then trying to figure out how to help someone ‘cross the gap.’

Maybe that’s a pipe dream, since there are, after all, gaps that should be crossed, such as gaps of poverty (something that cripples performance, yields a poor standard of living) or education (knowledge/skill) in real life.

Or maybe it’s just about having a baseline. We would probably want to (ideally) bring everyone across a poverty gap, but when we start to obsess over slight differences and segregate ourselves based on earning a hundred dollars more or less, well, that might be taking things too far.

Speaking of which, that’s about as far as that metaphor will stretch, methinks, so I shall stop.

No real answers here, just some food for thought.

Oh, and on your way out… Do mind that gap.

This post was brought to you by the letter B for Belghast and Blaugust, and the number 6.