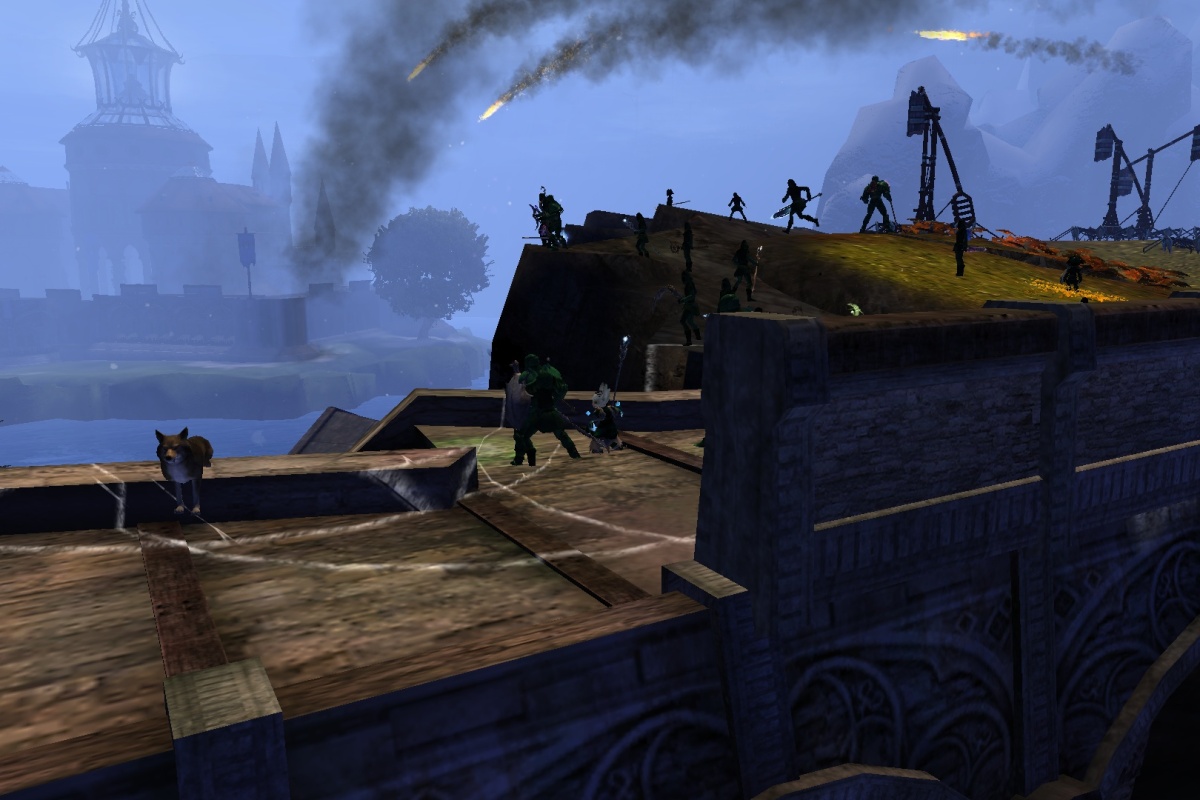 …why not piss them ALL off instead?

Or at least make it damnably inconvenient for a good many more people now.

Someone’s dropped the PR ball on this one badly.

The scenario: 8-10 days ago, someone expressed on the Guild Wars 2 official forums a wish to have separate WvW reset times for NA and EU servers, as the current midnight UTC reset means an understandably difficult 2am reset time (and worse) for much of the European continent.

The current WvW developer Devon Carver was listening in on the thread and tried one of those neutral PR lines about it not currently being possible to separate NA and EU server resets. Quite naturally, no one affected by this was satisfied with this answer, and two people suggested moving the reset time two hours earlier instead. One or two guys chimed in with some support.

Shortly after, the developer makes a cryptic post to “Stay tuned…”

Then the bombshell officially drops:

“Greetings WvW players! As part of our ongoing effort to improve the game experience with changes big and small, we’ve decided to change the time of the WvW match resets. The current time is 00:00 UTC on Saturdays, which is mighty inconvenient for our European friends who want to get in on the action of the newest match right away. We’ve decided that moving the reset time back by 2 hours to 22:00 UTC on Friday night to try and find a more happy medium for NA and EU servers. This will go into effect beginning this week and will be the new time going forward. Hopefully this makes it easier for you all to jump right in at the start of a new matchup. Cheers!”

So… how many newbie PR mistakes can we count here?

There’s three days to the next WvW reset. The only post about it is one stickied announcement in the WvW forums. At least it’s on the official forums.

And most hardcore WvW players are linked with a guild that should have at least one person trawling the forums and feeding back that info to the rest, but it’s still a bit of a ludicrous scramble for guild leaders and officers who have to now check their guildies’ schedules and have a new WvW reset discussion and make new plans and strategies in just a couple of days.

To say nothing of guild members or WvW participants who would be keen to participate at the new reset time but may have to rearrange their real life schedules to do it.

That doesn’t seem like a very long time to really think all the implications through on this one.

Y’see, folks have realized that there are actually four major timezones in play on a round-the-clock WvW map. NA, EU, SEA and Oceanic.

UTC 0 to UTC +3 is approximately Europe, I believe.

The old reset time that has existed for a good eight months puts reset at 6pm-8pm on a Friday night for North Americans, midnight-3am for Europeans (which completely sucks, I agree), 7am-8am on a Saturday for Asians (which makes us wake bright and cheery on a nonworking morning, but we cope) and 8am-10am for Australians.

By pushing the reset time two hours earlier, we now have 4pm-6pm on Friday for North Americans (and I’ve lived in your country for a while, I’ve seen your commute from work times,) 10pm-1am for Europeans, 5am-6am for Asians (!!!!!!) and 6am-8am for Australians (which can’t be terribly popular either in a country that I believe has a very strong pub culture.)

By making it possible for the European continent to play a mere two to three hours of reset before it gets to an absurd timing, we have now disrupted three other timezones.

North Americans are screaming their heads off. Why shouldn’t they? 4pm is an impossible timing for anyone who works normal 9 to 5 weekday hours. All of the West Coast is smacked by this. I doubt East Coasters are crazy about 6pm either, that’s quite a rush to commute from work, get their dinner down and be ready to play. (I know I’ve never personally managed 6pm raid times, which killed any ability to raid on my part.)

I’m not terribly keen about a 6am wakeup myself. 8am could at least be coped with. I’m more inclined to say ‘screw it’ and shut the alarm clock off and roll over to sleep in on a Saturday.

I suppose the Aussies can more or less manage since most live on the east coast, but I’ll let them chime in for themselves.

3) Change for the Sake of Change

This, I must add, has been the state of affairs for eight months since GW2 launched. Any unhappiness about the scheduled times was already discussed, hashed and rehashed and WvW guilds all over the world have already settled down into some kind of routine, even if it’s not the most ideal one for EU guilds.

Now everyone has to react to this new change, and we all know how well people deal with sudden changes thrown at them, right?

4) Salt in the Wound: Absurd Cheeriness

“Hopefully this makes it easier for you all to jump right in at the start of a new matchup. Cheers!”

I’m sure everyone who can’t make the timing is going “YEAH, RIGHT” at this line.

I have to say, I’m very disappointed in ArenaNet for this one.

One of the most exciting times of the week has always been WvW reset night. It’s a time for guilds to come together and work together. The voice comms fill up, guild tags move in unison to their designated maps, all servers’ maps are filled to the brim and it’s a spectacular example of what WvW looks like with full coverage.

For a good 6-8 hours, the PPT scores tend to hold remarkably balanced and steady, and the colors on the map don’t shift around much, but it belies the furious raging fights and excitement and many many numbers surging around the map testing defences, making offensive sallies, rushing back to defend, fighting for that last scrap of supply and so on.

This two hour move wrecks that. I forsee NA guild numbers being cut in half or at least reduced to three quarters from the earlier reset time. People will end up staggering in in batches to WvW on reset night – which makes it no different than any other night, mixed militia and maybe a few guild groups moving around at a time that is convenient for them. The special fury of the reset surge is greatly diminished. The guild event-togetherness of moving around in force against other guilds just as filled to the brim is shot in the knee.

For what? A time that isn’t the most ideal for Europeans either, just better by a few hours.

I’m sure EU would much prefer a reset time that starts at a sensible time for them, like 8pm.

Now, this has been repeatedly stated as quite technically unfeasible for whatever reason.

So players have suggested other compromises.

Put the reset on Saturday. It doesn’t solve the wakeup issues for Asia and Oceania, but Europe gets to play their couple of hours and Americans at least don’t have work or school conflicts. (Except Anet probably needs staff at work to reset WvW.)

Find another ideal time. UTC 5pm was suggested. This one makes Asians unhappy because it places the ex-Euro 2am wakeup problem squarely into their timezone, but I’ll grant that the servers are named NA and EU and us poor Asians and Oceanics are always getting slapped in the face with MMO timings regardless. And at least no one is at work, though sleep and health will be severely compromised.

But really, this time shifting thing just keeps moving the problem into different timezones. There is no one perfect time that can make everybody in the world happy.

Another interesting suggestion, and one I’m leaning towards in terms of fairness and potential for being the most entertaining, is to continually stagger and change WvW reset times to suit different timezones and continents. Ie. have a monthly schedule out that states reset happens at like, 8pm NA time on this week, 8pm EU time on that week, and 8pm SEA or Oceanic time yet another week.

This way everyone has to adapt their schedules, everyone may not be able to make it on certain weeks, and different regions’ guilds may come out in force, changing up the meta and the resultant strategies and score.

This mismanagement has left NA unhappy, and EU taking a joyous schadenfreude pleasure that NA now shares their misery that they’ve been suffering for a long time, which is a very strange state of affairs for a game whose overall theme is to unite people and have them like each other and cooperate with each other.

Whatever the case, it’s evident a bit more thinking and change management should have gone into this announcement at the very least.