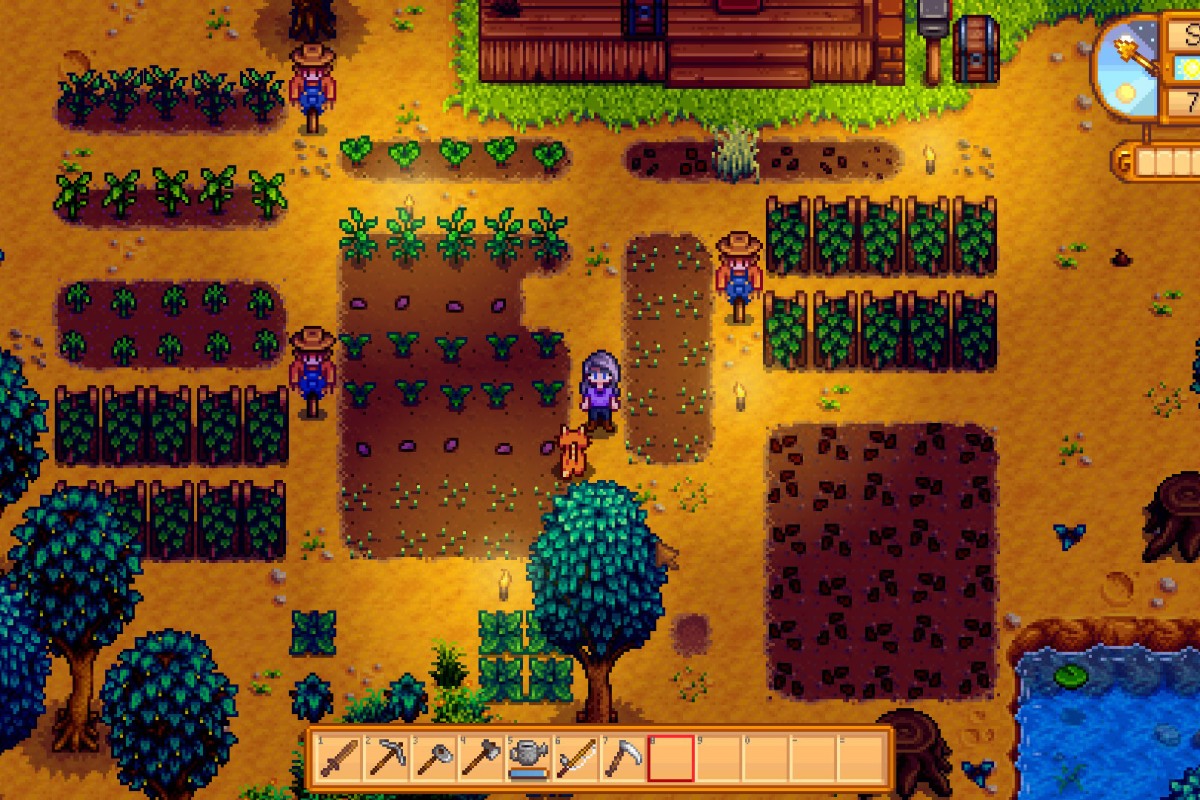 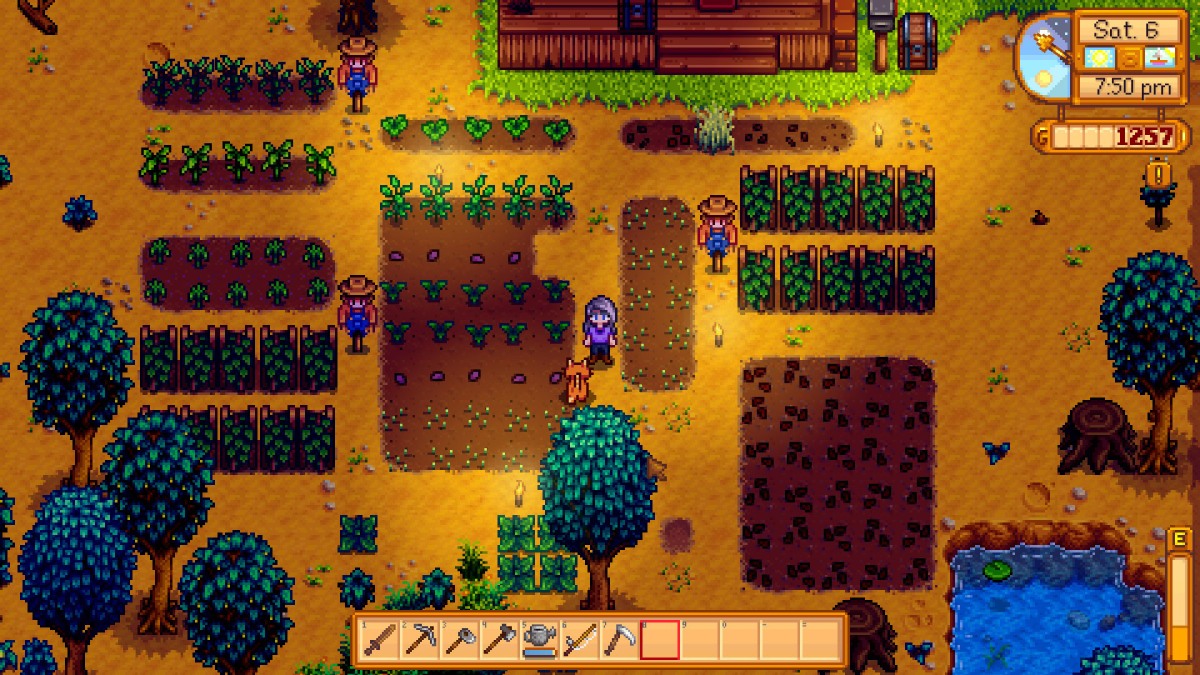 This game is a dangerous time-suck.

I boot it up to get a few screenshots, and before you know it, I’m doing the “just one more turn” thing into the wee hours of the morning trying to make the crops grow up to the point where I can reap the rewards, and oh look, the seasons changed, my plants are dead, I need to plant more seeds and make them grow up to fruiting stage again. 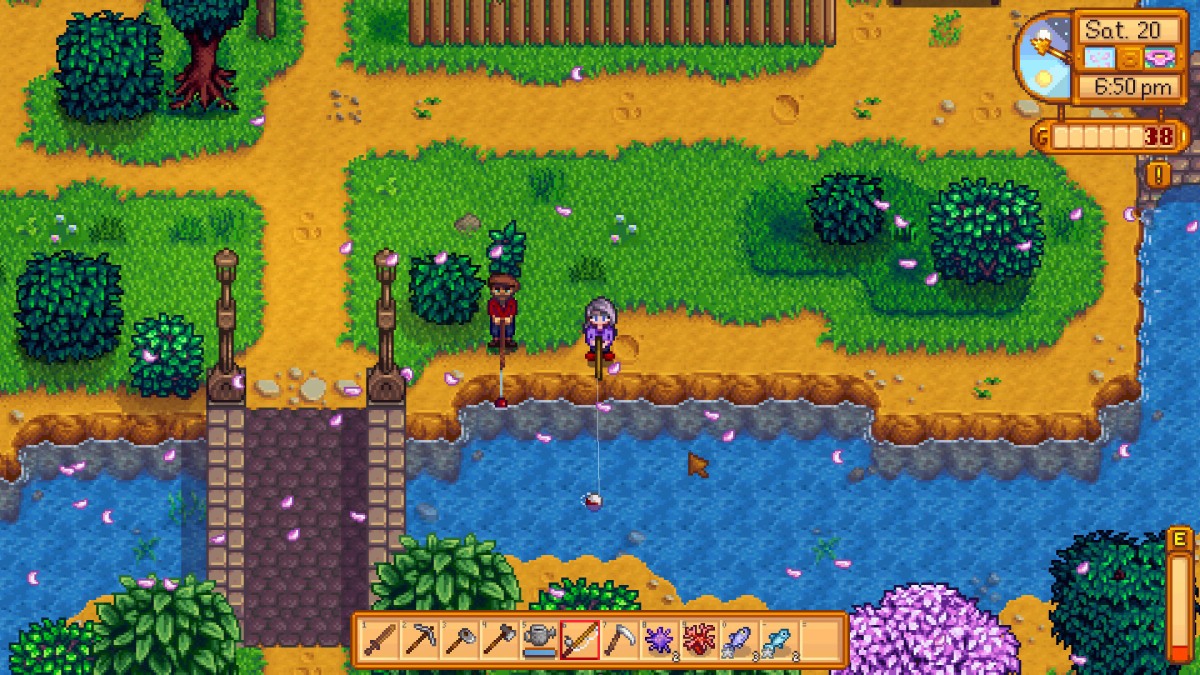 It probably didn’t help that I spent most of the spring fishing.

In every conceivable spot I could find. Because the minigame is devilish in a casino-like sense, involving just enough skill that makes you think you can control the outcome sufficiently and enough RNG from different fishing locations and different fish biting on the hook (and a high amount of variance on the basic rod) that the outcome is never guaranteed.

Somewhere along the line, the community center quests were unlocked. This asks the player to turn in one of practically every item there is in the game for rewards, in themed bundles like fall crops or spring forage or night-caught fish. 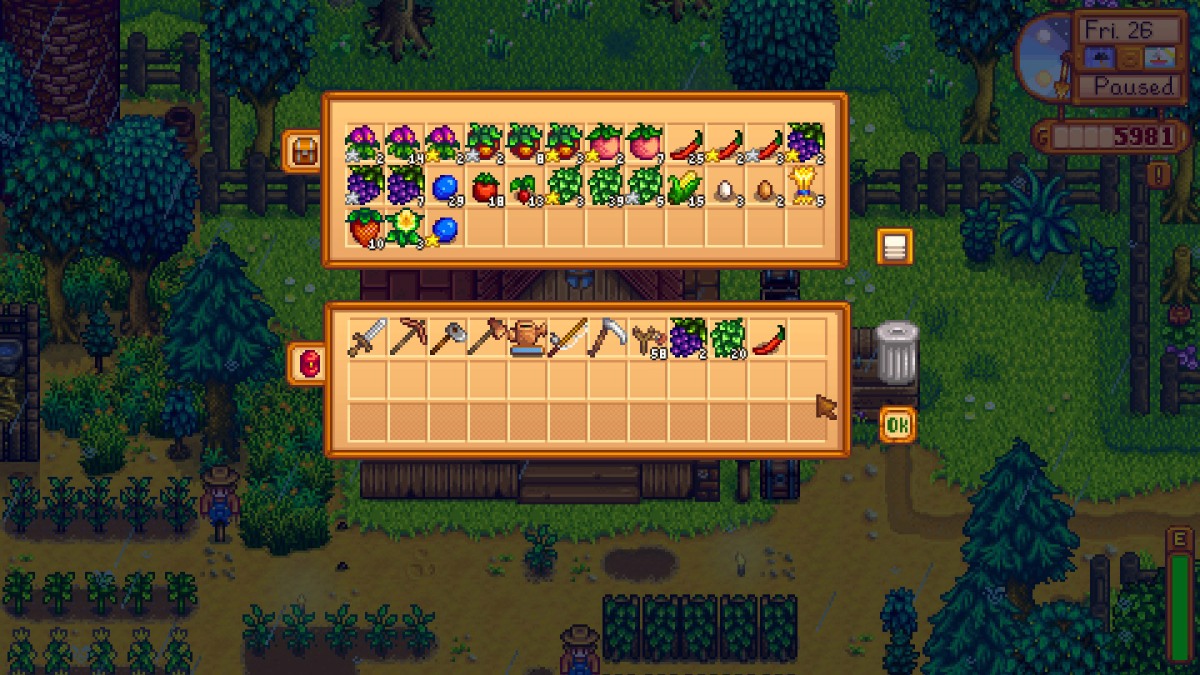 Naturally, this fed my hoarding tendencies to no end. Turning a profit is now tricky, because I’m more inclined to keep it in a chest instead.

Still, a sandbox is a sandbox.

Some people choose to min-max their farming to optimal sprinkler patterns and industrial crop generation.

Some people choose to decorate their house with pretty bits, or play the NPC dating sim portions.

Me, I’m tootling around on my dinky little unoptimized but immersive farm, watching the crops grow and the days go by, while I mostly fish the hours away. 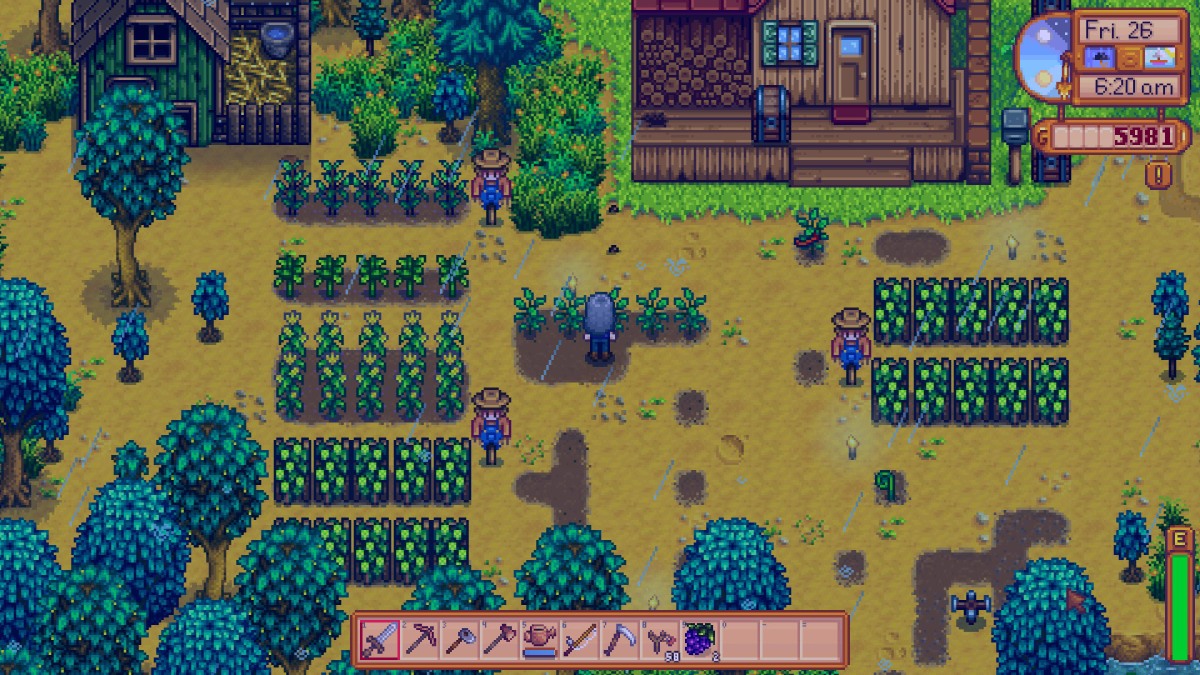 I’m also dead certain half my played hours are spent holding down “A” or “D” to criss-cross a multitude of screens “running” here and there, at a pace other games would call walking speed. Sneakiest time-wasting mechanic ever.

Before you know it, the natural tendency of humans to rationalize kicks in. “Gee, I just spent hours playing Stardew Valley. I must really like this game!”

(Not to mention the sunk-cost fallacy.)

For pleasant whiling away of hours to cheerful music and idyllic pastoral settings, especially if you only own a PC and can’t play Harvest Moon/Rune Factory variants, Stardew Valley can’t be beat though.

The inside of my modest chicken coop: 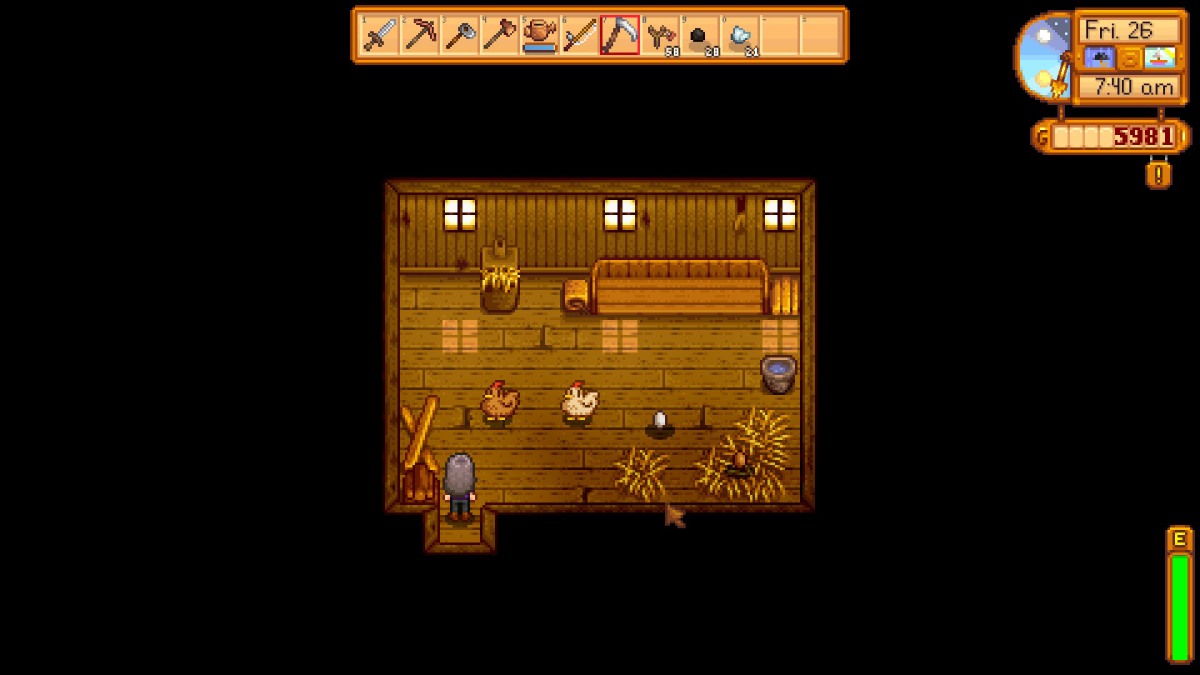 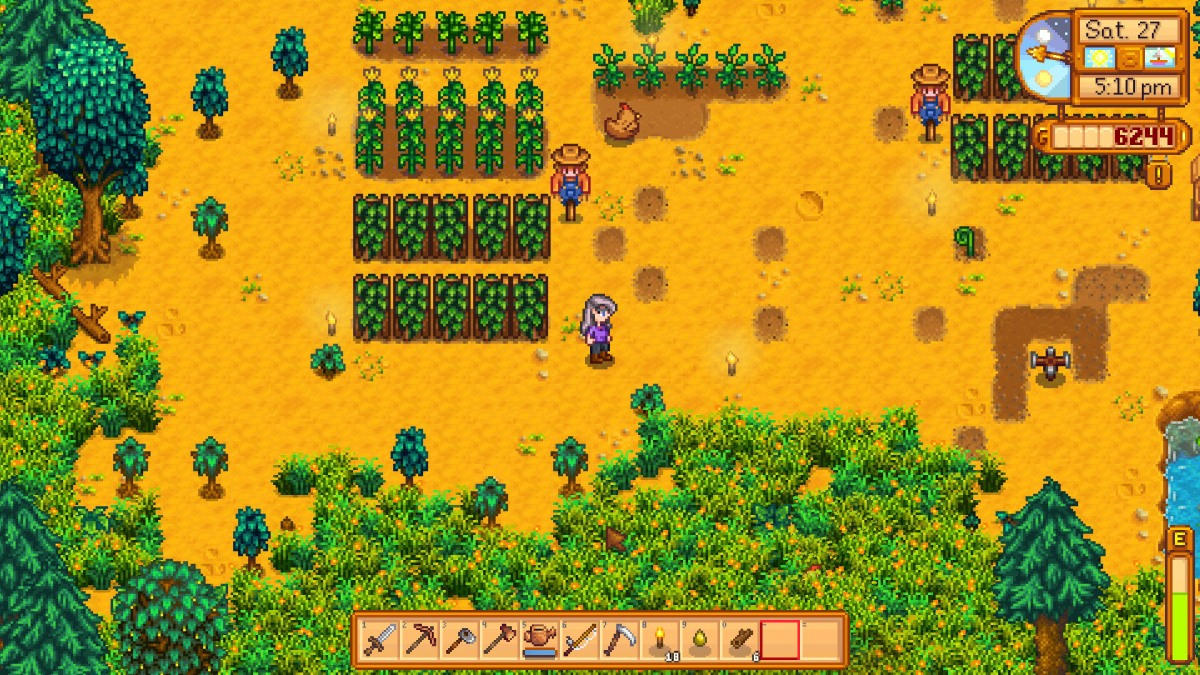 I’ve been keeping the bulk of the overgrown grass around, because they’re apparently a free source of hay.

The silo’s currently clogged with 240 pieces. Am still progressing toward a barn and larger farm animals ever so slooowly.

In the meantime, the hens are running amok in the tall grass and I have to admit that I rather like it that way.

(Fortunately, in-game hens are nice enough to return to the coop to sleep every night, and Stardew Valley doesn’t implement any “farm livestock happily run off and get lost without fencing” mechanics or have any free-roam hen predators around either.)

Before you know it (or rather, 15 Steam played hours later,) fall is here.