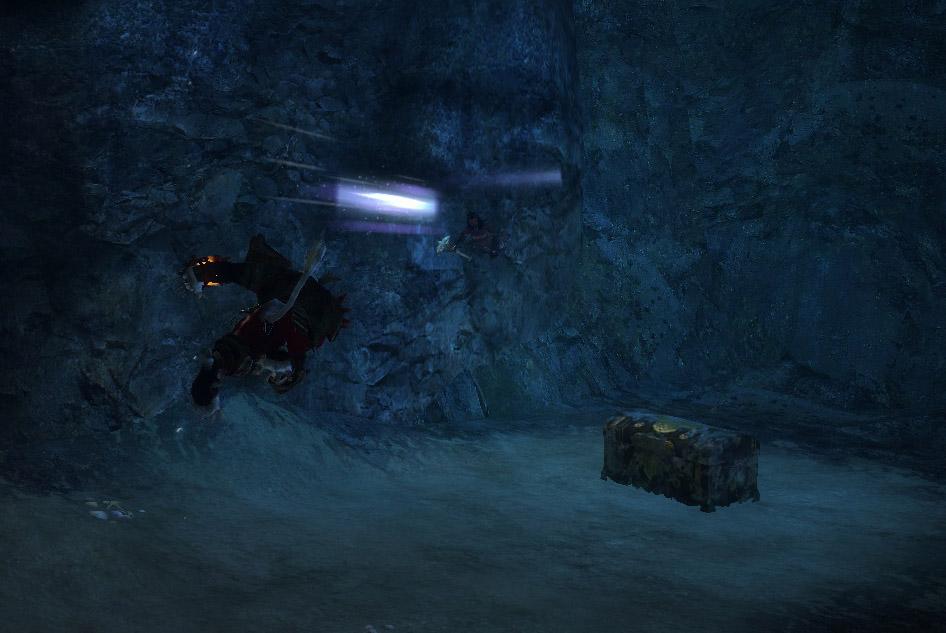 I was meaning to get around to this post sooner, rather than later, but the sudden news bulletin of City of Heroes closing down pushed back the schedule even further. It also means I’ve completely lost track of the posts in the blogosphere that circled around this topic, and can’t find them again, so no links for you. 😦

The basic question was:

What would you keep doing in an MMO, even if you were not being rewarded for it?

Most of the time, the conclusion implied was that one would pretty much do nothing that wasn’t rewarded, players being such min-max optimizers, after all.

What I want to point out is a fundamental assumption in the term, “reward.”

There are extrinsic rewards, such as xp, levels, a piece of gear that improves your character’s stats or appearance, gold, an Achievement, a title, a score increment, a chest you open that provides some or all of the above.

And there are intrinsic rewards, that mostly fall under the umbrella of “fun,” with the caveat that what constitutes this differs from player to player. It could be the pride in being first at something, the egoistic thrill of being able to show off something others don’t have, the pleasure of self-improvement, the satisfaction of progress on a goal or a checkmark of completion on a to-do list, the joy of receiving a gift (unexpected or otherwise), the excitement of confronting a challenge, the triumph of beating said extremely difficult challenge, the delight of learning something one didn’t know before, and perhaps even of mastery, the happiness of being in moment-to-moment flow, the wonder and awe of seeing a beautiful landscape, unsoweiter.

The truth is, one would be a very foolish, masochistic player to keep at any game if one were deriving more frustration and unhappiness out of it than enjoyment. So in that sense, nothing we do in an MMO is ultimately delinked to any form of reward.

The real questions are, in which order should the rewards be coming, at what frequency, and how does that shape player goals and behavior in turn?

The typical MMO generally makes you put up with mild to severe unhappiness as you “work” towards an end-goal that promises, or at least, affords you the hope that you will (eventually) get an extrinsic reward shiny, that will then feed intrinsic feelings of fun. If you’re lucky, you still enjoy the process so that mild to severe unhappiness isn’t present and things are still okay. But at the rate of repetition that is usually required, familiarity leads to contempt or boredom more often than not, and before you know it, there is the obligatory “grind” to get to the “good stuff.”

Thing is, chasing an extrinsic thing first for the intrinsic feeling later is dangerous. Taken to extremes, it’s like a drug. You end up chasing something for the buzz at the end, and somehow, that buzz ends up so momentary that shortly after, you’re in desperate pursuit again.

Given the propensity of humans to fool themselves into thinking situational normal, even when they’re not, one may end up chasing a reward that never comes, yet feeling more and more miserable in the meantime.

Now Guild Wars 2 isn’t completely revolutionary. It doesn’t remove the above. It’s probably unwise to, since players are used to the formula and many do need external reasons to keep playing and maintaining critical mass of playerbase is always important to a game.

But Guild Wars 2 is also quite sneaky. They’ve added on to the model by including the other order rewards can come, and mixing it up with a helping of variety and choices.

You’re moving along on your path towards a heart, a crafting node, a personal story waypoint – something explicit and linked to an extrinsic reward. Then you stumble across something unexpected. A hole in the side of a cliff that you’ve never seen before. Curiosity and novelty pop up, do you go in? Maybe you do, to feed that intrinsic urge, and before you know it, you’re on a mini-adventure complete with traps and enemies and argh-inducing jumping puzzles, and at the end, you’re pleasantly surprised to see a ‘boss’ mob with a chest containing an extrinsic reward.

You didn’t know it was there when you first started, but it is now an additional happy bonus. And it reinforces (aka rewards) that style of play, because you are now assured that there very well may be something tasty to find at the end of the rainbow that caught your eye.

Or you stumble across a dynamic event. Decision point time. Do you follow it, or continue on your initial path? Though both will ultimately yield extrinsic rewards at the end, that choice might be different from person to person. If the DE is still new and novel, or if one wants karma as a reward, or if one wants to see people, you’d take off in that direction, but if the other stuff is more pressing, then you’d continue on your way.

The jury is still out on whether the bulk of players will eventually grow bored with the same DEs they’ve seen, or avoid them due to difficulty level not being commensurate with rewards (Nageling giant, anybody?)  or whether a sufficient critical mass of players will show up just because it’s there and waypointed on the map so may as well try one’s luck to get some karma, but if you think ArenaNet isn’t aware of this, you may be kidding yourself. Their proposed solution is to change up the dynamic events, so that the new novelty factor may indeed skew more players’ decisions towards heading there.

The other question running in everyone’s minds is whether there will be enough players in the zone to even see the new DE. Well, time will tell on that front, but there are a few things that may help this. If a player chooses to remain on a single level 80 main, he still may have to level up his crafting, gather things to sell, maybe visit all the hidden chests scattered around the zones that will be eventually marked out on a wiki daily for loot or even just grow bored with the highest level zone and go wandering.

Alternatively, he’ll be in WvWvW or doing explorable dungeons, and possibly out of the equation altogether, which doesn’t bode well for the lowbie zones… except, for the presence of altholics. There are what, 8 professions and 5 races (and not enough character slots on purpose.) If you think a sizeable number of people won’t be rerolling alts to try out different playstyles, well, you’re a far more focused, faithful one-character player than I.

And guilds are account-based. Alts will be part of the same guild. What’s to stop a player from opening his mouth and going,” OMG, there’s a new something-or-other that popped up in (insert lowbie zone) here. We need help!” Now how many high levels will bother to respond, I don’t know, but between boredom, curiosity, guild relationships and helpfulness, plus the assurance that downleveling will still give valuable rewards, perhaps enough.

The one thing I’m not terribly fond of at this point is that though a player can join multiple guilds, he can only see the guild chat of one at a time. I have to say, it quite defeats the purpose of multiple guilds, which is to give one more connection points to more people and stuff going on in the world. I would have much preferred ArenaNet to limit guild joining to one-world specific (to avoid the complaints of spies in WvW) and allow for players to listen in on all guild chats at once.

A Tale in the Desert’s multiple guild feature worked that way. City of Heroes’ global chat channels worked that way. The basic point is to have multiple chat tabs linked to various groups of people for some specific purpose or other. If I can’t hear what those other folks are doing in-game, then I may as well just join multiple guilds’ ventrilo servers or something, except that would be way too much effort to bother for a loner like me. I do hope they take some time to iterate on this once the launch frenzy slows down a bit, because it’s a flawed feature otherwise and could stand a lot more polishing.

Back to rewards, since I’ve sidetrekked. What would you keep doing in an MMO, even if you were not being rewarded for it?

Bear in mind, that of course I’m being rewarded, by intrinsic rewards, rather than motivated by a search for tangible extrinsic ones (which is usually what is meant by the term.)

Without the lure of crafting material drops, I would most likely not be genociding vast swathes of wildlife as I’m doing currently (I need 15 vials of thin blood for a rare, dammit, *kicks the trading post*)

But I would be going up and down and into stuff that catches my eye and spending hours trying to figure out how to jump from one pillar to another, simply because the mountain and the broken ruins are THERE.

Drawn on by the lure of cliff bats that something may very well be up there, I lost a couple of hours to figuring this out, which eventually turned out to be the Crimson Plateau jumping puzzle.

I would, surprisingly enough, continue to rez players, often in the thick of combat, even if I don’t get xp for it and even if I don’t get any thanks for it. It’s a little odd when you consider that I’ve observed 80-95% of players continuing to shoot at a big mob because either they don’t see the downed player because they’re fixated on the mob, or maybe they’re scrambling to deal as much dps as possible so that they’ll get a gold contribution reward instead of bronze or silver.

But I see the downed player struggling, or the defeated player lying there, and I know they are praying for a Good Samaritan to help them out of the mess they got themselves into. What does it say about your server community if everyone walks on by or ignores someone in need of help? How is that player feeling right now? If you were in their shoes, wouldn’t you want to be helped?

It gives me a warm fuzzy feeling deep inside when I respond promptly, and it’s even thrilling to act as a combat medic and roll towards someone right underneath constant projectile fire above your head and begin reviving. And because I play a Guardian with my fat cat butt covered in heavy armor and a hp tank bulked up by Vitality, I can even take a few hits through the revival process without going down myself.

I would, as long as the dungeon strategies do not turn rote or pigeonhole classes too much in one permanent playstyle, continue to join dungeons as time and whim permitted. I’ve actually joined two AC story mode dungeons way over-leveled and having done it once for the helm already, because I wanted to see how different teams reacted to it.  Because I like the learning process and the randomness of a PUG and figuring out to best work together and facing a challenge that allows me to demonstrate what I’ve learned and continue to seek mastery at it. The moment it becomes, bring the class built this specific way, and not the player, is the day I stop.

And most of all, I would be still in WvWvW as long as they keep the scoreboards on, because it’s a nonstop, unending, always-different-situation thrill. Novelty, achievement, teamwork and server pride all rolled into one.