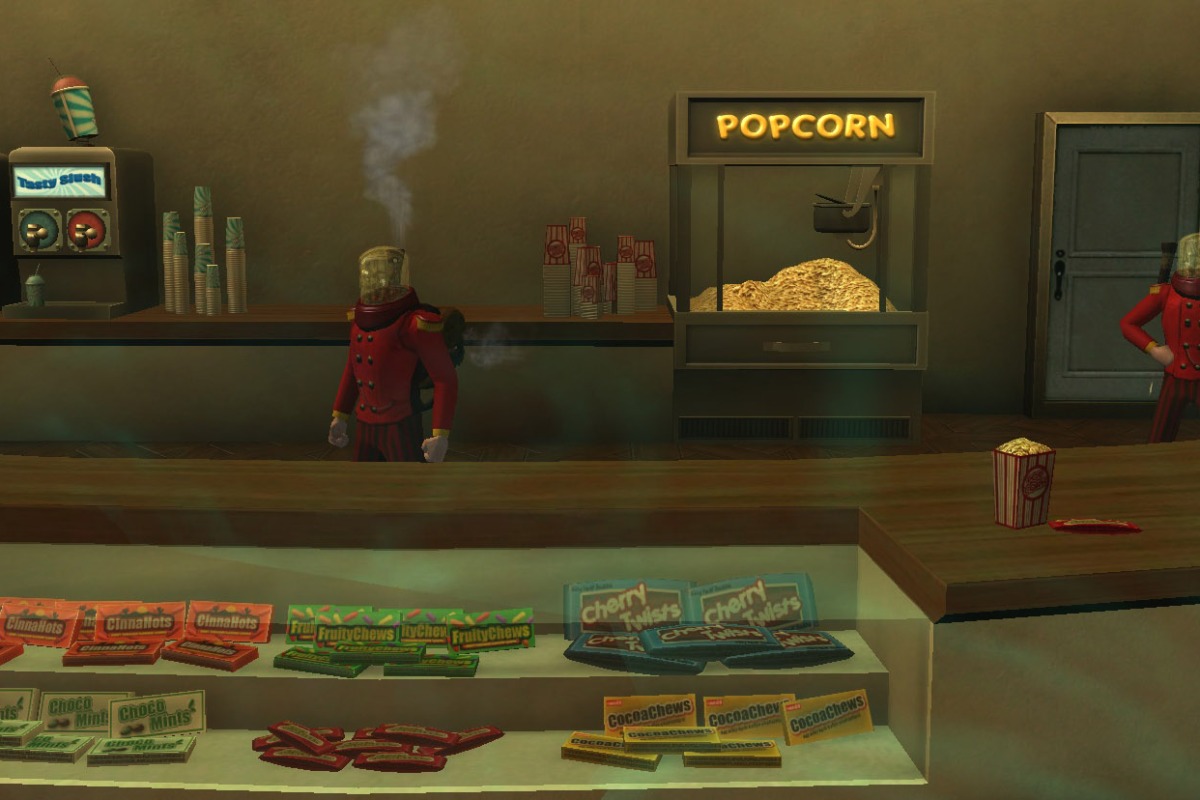 And now for something I do like from City of Heroes, lest you think I am a sour grapes and am just using the poor aging game as a whipping boy.

I know it seems that way. I’m honestly not happy with my sudden ennui and frustration. I joined it in the end of 2004, and my loyalty didn’t waver until last year’s track record shook it badly. (It was obvious the company culture and certain devs had changed hands.)

I have the equivalent of 84 months – 7 years – of veteran rewards. I don’t want it selling out to become the worse of F2P (slippery slide down the slope of lottery and gambling for big profits) and the worse of WoW (slippery slide up the repetitive grind shiny gear-chasing ladder).

It still does do -some- things right. Though sometimes I’m convinced they were happy accidents of fate.

The Summer Blockbuster Event neatly encapsulates a lot of the good things I do like. I don’t know how much of it is purposeful design and how much is just bonus, but there’s a lot to describe and break down.

It’s an event designed for a group of 4 players. It is begun by queuing using the LFG turnstile system and you have a choice of PUGing it (a pickup group) or forming your own premade group of 4 to start.

You begin in a Theatre Lobby, which builds in some breathing space for slow zoning players, getting to know your new group and discuss strategy and tactics or teach anyone if they’re new. The Lobby also sports helpful inspiration vendors, masquerading as steampunk popcorn vendors, and acts as the hospital for defeated players.

It also has a nice immersion easter egg, winning player-created movie poster designs for folks to admire. (I believe the vendor is also a winning player costume design.)

The event comes in two parts, representing the movies Time Gladiator and Casino Heist. Whichever part starts first is random, which brings a small but nice touch of variation to the party. They are covered in detail in two separate posts as linked.

There are so many reasons why I love these Summer Blockbusters.

This used to be what City of Heroes stood for. Each Issue, they’d experiment with something new, something not seen before, something that pushed the envelope of what they could do with their aging MMO engine. That’s why I kept up a subscription year after year, even if I took a break for several months, because I wanted to see the devs continually surprise us with good stuff.

These Summer Blockbusters are an intricate complex arrangement of mission mechanics that were probably first built for the Incarnate Trials, and all I can say is, it’s about fucking time that they brought some of it down to the small group level.

There’s one perfect ideal path. The path that gets you all the ten badges in one run in the shortest amount of time possible. When it happens, it is a really good feeling that all the players are in sync with each other, perfect score, awesome team, very nice job, all that congratulatory business. But you know what?

You still get the shiny IO reward at the end as long as you can complete the entire thing, even if people take alternate routes, even if people screw up, even if you don’t get a perfect badge run. And that is as it should be. That rewards persistence, not giving up, forgiveness of mistakes (your own or other people’s). No big loss, it’s just a badge you can get at another time, assuming you didn’t already have it.

Even if people inadvertently disconnect and drop out of the team, the event is completable with less people. I’ve done it with three (from scratch, a dark def, a dark corruptor and a scrapper), and even two (that was halfway through that folks crashed, so it was the casino heist left. The biggest problem was Sylvia’s regeneration rate that my lone stalker couldn’t beat. A scrapper joined up by chance using the LFG queue and that extra damage was sufficient to overcome her and ultimately leave us both walking home with the Universal Damage IO reward.)

The only issue is that the casino story doesn’t quite line up properly and you’d have to wait for the phases to time out and forgo the chance of perfect badge scoring on that part.

The only thing I do kinda wish is if they managed to scale it down to soloability, just to be inclusive, but I’ll seriously take four-person teams over 24-man Incarnate trial raids ANY DAY OF THE WEEK.

It’s small enough to be aware of the role of each person and allows for chances for group synergy (who’s tanking, who’s doing damage, who’s supporting, and hybrid versions thereof.) It’s not so chaotically messy.

I rather like that they chose to exemplar us down to lvl 29. Too high a level is a little exclusionary for those who don’t have higher leveled characters. And those of us with higher leveled characters, well, when we exemplar down to a mid-range,  most of us lose all the gap filling powers and set bonuses that allow people to run around heedless of archetype soloing things tankmage style, and have to fall back a little more on the fun group dynamics of City of Heroes.

As a guy on the forums mentioned, his support characters actually felt valuable, like they could shine in true support, rather than be overshadowed by the thousandth and one uber-Incarnate scrapper. Scrappers and even brutes are squishier at lvl 29. Good support helps them shine. In turn, squishy classes ARE squishy at lvl 29. Proper tanking and holding aggro really makes life easier.

I also really appreciated the lack of purple triangles on many of the AVs and bosses. Control classes have a good chance of stacking enough control to make a visible, noticeable difference. This stuff matters. This stuff lets players feel their characters are effective.

I took my support characters out of the deep freeze (270 days and counting) to play the event and it felt good to make a noticeable difference, something I simply wasn’t feeling in Incarnate trials.

There’s a 20-hour limit on one character to earn the desirable IO shiny via the event. I think this was meant more to limit the rate at which the shiny is earned, but it is a happy accident that this encourages the digging up of alts to run multiple playthroughs.

I’ve been unearthing more and more alts to run them through the event and it feels like meeting old friends again. This nostalgic fondness for characters long forgotten, but still up to performing well as muscle memory kicks in.

I’ve had picture perfect optimum role runs where everyone fell naturally into CoH’s hybrid version of the holy trinity (with extra buff/debuff and cc love!)

I’ve had runs where a secondary class can fill in roles in a pinch, with others’ support (my scrapper was tanking with the leadership buffs from a Soldier of Arachnos), or the more nonstandard but still good combinations (the controller used phantom army to tank)

I’ve even had the eyebrow-raising “ooh er, this is tricky” runs. Namely, one run with all squishies, two controllers who didn’t have invulnerable pets, a dom and a blaster. We all got tossed around and three-shotted over-and-over by the first AV in the arena as we established none of us had true tanking capability as is. At which point, I rolled my eyes, bought a bunch of purple Lucks from the popcorn vendor and acted as volunteer tank by virtue of stacking three of them at once for effective defence and just unloading on the damage till I drew aggro. Things stabilized from there, and yes, we got the shiny at the end.

Or the run with my ancient low-damage stone tank, two lowbie brutes who also seemed not that well-slotted on damage, and an illusion controller. I went in expecting to be all tanky, and then I realized that everyone was survivable, the controller’s phantom army was tanking half the time and one of the brutes the other, and the total amount of damage everyone was outputting was scarily miserable since the three melee types were sucking wind on endurance issues. So three quarters of the time, I ran around toggle-less in order to save endurance and do normal (for a tanker) levels of damage to contribute and everyone stopped for lots of blue candies at the inspiration vendor later. We managed, pretty painfully, but managed.

5) Short and Sweet, Fast and Furious

On the whole, excepting the rare cases above, each event is exactly that, short, sweet instances of fast furious fun and action where you get to beat up some AVs in a small group. It’s like the Imperious Task Force (everyone’s all-time favorite TF) in miniature.

6) LFG Tool is Actually Working For Once

Wait time is minimal. I presume this is because critical mass of 4 people is much easier to achieve than presuming 16-24 people have the patience (or lack of sense) to stand around queueing hoping that an Incarnate trial will start, utterly leaderless and still succeed.

And success is easier to come by and the mechanics easier to learn and more forgiving, which yields positive feedback into the loop and encourages more players to keep queuing because hey, these random groups of people can still  succeed and they’re fast and convenient to get into, and no one needs to lead. Everyone just needs to do their part.