The last thing I clearly remember was the dead bird in my hands and the salt-sea smell of its blood.

I know, with a certainty, that I shot it.

I do not know how much time passed.

I think I recall the vengeful shriek (of its mother? Or was it something else?) as giant talons closed around me and all consciousness was lost in a rush of cold wind and vertigo.

I don’t remember my name or where I was.

I wake up in a field.

I could have sworn I saw the shadow of giant wings fly through that distant pass, just before I fully awoke.

Somehow, I know that I have to follow it. Find it.

What happens after, I don’t know.

Am I hunting it or seeking forgiveness?

But I do know I can’t climb up to and hope to survive through that pass without tools and without being prepared for anything.

I turn around to get my bearings and nearly jump out of my skin. 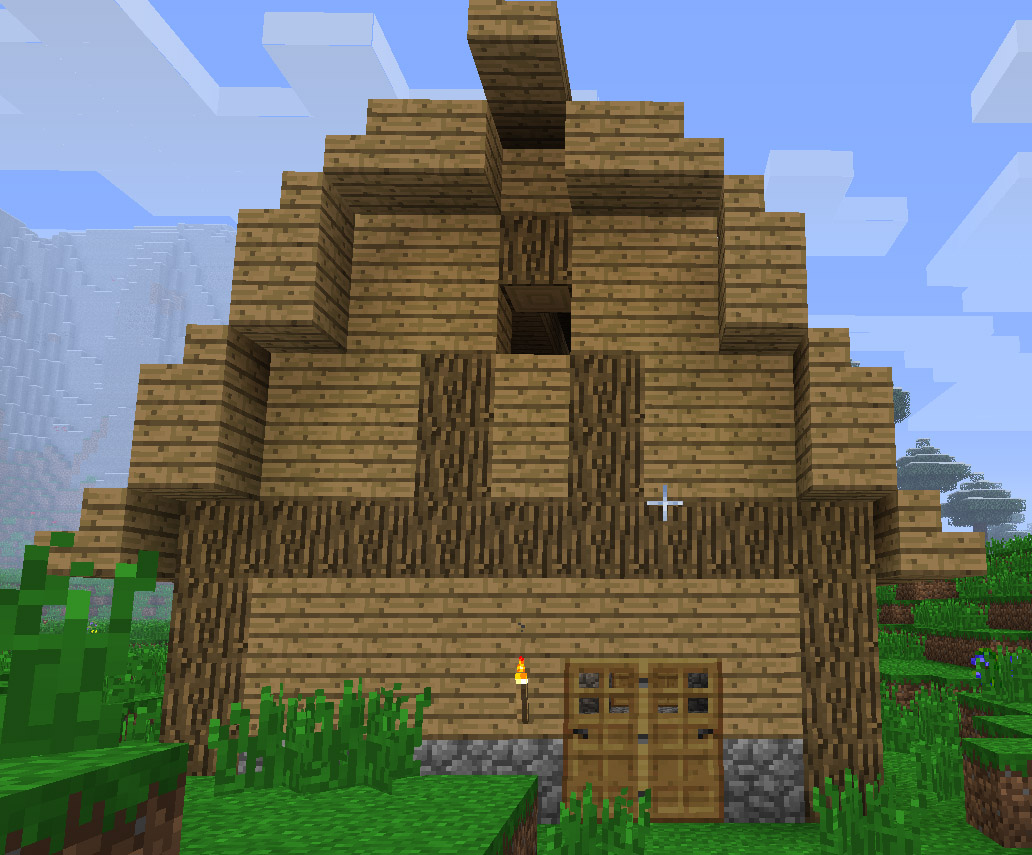 A strange house is behind me.

Who lives here? Did I know this place once upon a time?

“Hello?” I call out, as I cautiously creep through the front door, almost expecting some manner of enchantment to befall me – a wizard or a witch who hates visitors to their abode, or for the entire house to be a trap.

I pick up a fallen torch and hold it up carefully.

There’s nothing on the ground floor, except for what looks to be some stabling.

The second floor is equally deserted.

I could shelter here, I think, assuming nothing strange happens in the middle of the night.

It’s not looking like I have too many options regardless, given the position of the sun and my pressing need for tools over building a temporary shelter.

While out gathering wood to work on a workbench, I come across a potentially dangerous animal and pause, caught in a dilemma.

Killing an albatross (I think) is what got me into this situation in the first place. Do I let it go on its way?

Then again, it’s an alligator, in the river right next to where I’m about to hole up for the night, and it probably has no qualms about eating me when it’s hungry.

I’m already here. It’s not like things could get any worse.

I swiftly set down my workbench and put together a wooden sword, not much more than a club, really. It was already hurt, I may as well put it out of its misery.

I strip the corpse of some meat and scales.

Before long, it’s sunset, and I return to the house with a haul of wood and some coconuts.

It takes me a while to figure out how to hack them open.

I start work on a tool crafting area, chopping wood planks to build work tables for parts and patterns, and whittling them down further into more refined tools.

In the middle of the night, an insistent screeching from the window makes me look up, right into the beady red eyes of a giant black spider scrabbling away at the walls, trying to get in.

It can’t fit, but I don’t want it hovering around outside making that racket. I grab my new wooden broadsword and pound down the stairs to kill it.

Just as I’m cleaning spider ichor from my new blade and turning back inside, I freeze.

In the distance, I think I see strange glowing purple eyes.

The next two days pass by uneventfully.

I explore and get my bearings a little more.

I gather what I can from the land around.

I get a closer look at the gap I plan to cross, and decide I definitely need to be better equipped.

I attempt exploration of a nearby cave to find that it extends deep into the earth. It’s rich with ores, though.

On the third day, I realize that I am hungry.

That there is a gnawing pit of starvation in my stomach that cannot be sated, no matter what I eat.

The coconut meat is tasteless. The scraps of alligator meat are like cardboard. The barley bread I tried to bake feel like rocks in my belly.

There is a sense of overwhelming wrongness and a strange foreboding. 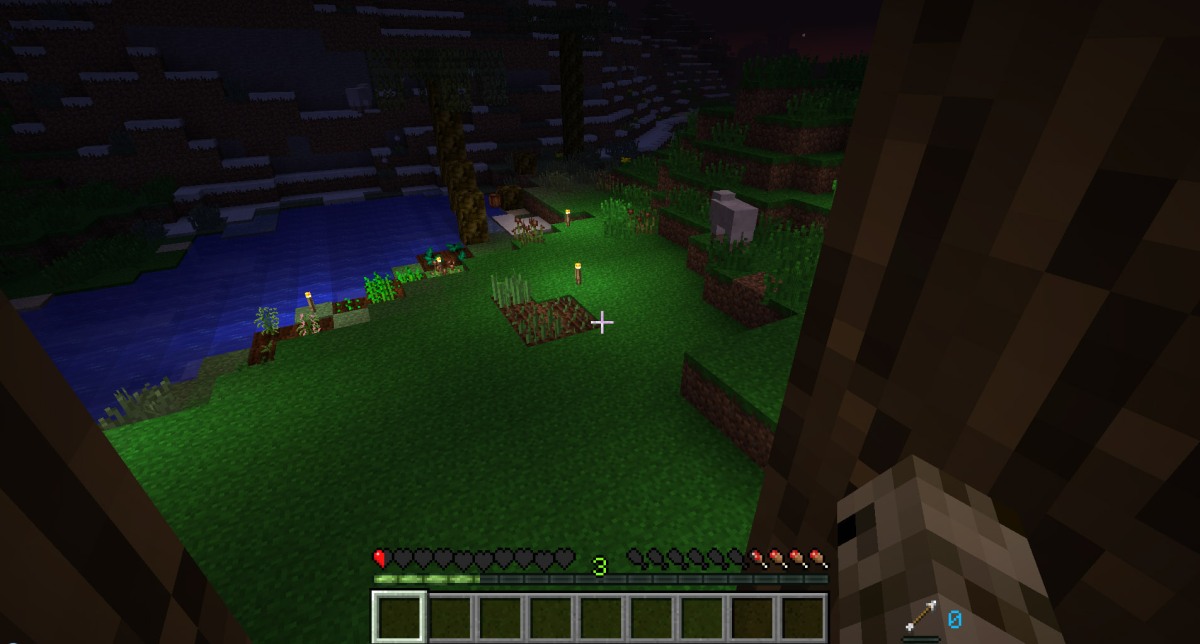 It’s night now, and I’m feeling weaker than before.

There’s nothing left to eat. The rest of my crops haven’t grown yet.

I hear the moan of a zombie at the door, and I think, what the hell, it’s not going to get an easy meal. I have the strength for one last fight.

I grab my sword.

It is a tense battle, me keenly aware that one good hit would end me.

Panting, trying to catch my breath and not faint from the overwhelming hunger, I almost can’t believe my fortune.

The sun is rising…

Then its brother comes around the corner.

Mercifully, before the zombie starts chewing, I black out…

…and then I wake up. 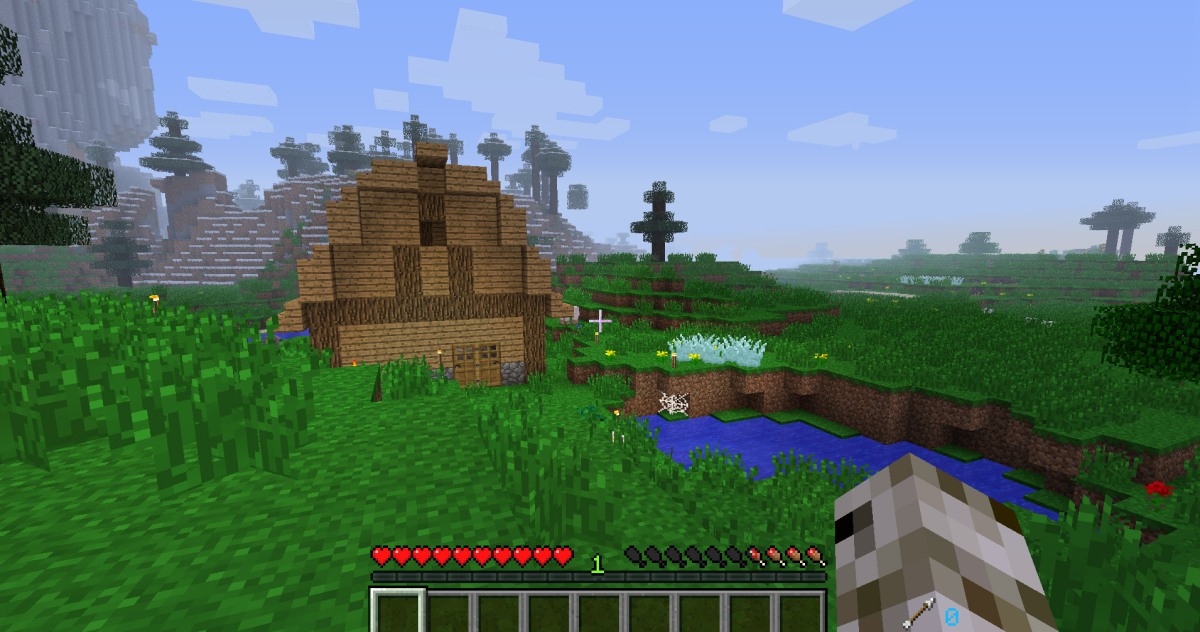 WHY AM I NOT DEAD?

It’s not until I stagger over to the lake and look down at my reflection, that I realize there is indeed an albatross’ curse.

I have to cross that gap.

The days blur together as I try to get supplied up for the journey.

One night frightened me though.

I arrived home to find a visitor.

It looked at me and said nothing.

I looked at it, sword raised defensively, and we froze in a terrible tableau of locked stares.

It screamed. A silent awful scream. There was no sound, but it was the scream of a damned soul.

Shaken, I looked away.

Sword at the ready, I raced all around the house to find no trace of it.

I dashed outside, ignoring the rain coming down in sheets, to circle the house, all the while expecting an attack from behind.

I don’t know what in the world it was.

Did it come in to shelter itself from the rain?

Was it the original occupant of the house?

It doesn’t bear thinking about.

I saw a small albatross.

Certainly not as big as the one that grabbed me.

And smaller too than the one I shot.

I didn’t shoot this one, of course.

I followed it at a respectful distance until it flew off towards the horizon.

It headed a little left of the gap that I was planning to cross.

At least I know where I need to be going now.

(The recent spurt of Everquest Next Landmark blogger posts have left me with a curious longing for a good, creative sandbox world where I can have a real adventure AND build stuff.

Except that I don’t pay for stuff in alpha, and tales of people grinding to unlock tools and asking for refunds as they run out of stuff to do/see while everything is temporary have only solidified my decision to check it out only when it’s in a more finished state.

Vanilla Minecraft though has always had a boring sort of narrative to my unimaginative self. Appear somewhere, hide from zombies, tech up, make farms, aim to become more self-sustaining, mine for ages looking for ore to get to the next tier, figure out what to do with the immense amounts of cobblestone generated in the meantime, eventually find diamonds, make a Nether portal, and get bored somewhere in the midst of exploring the Nether and never get to The End.

I tried a few custom survival maps – getting shipwrecked and have to survive on an island, etc. and while they started off fun, things always got boring once I got food sources stabilized and ended up in the endless mineshafts looking for ore routine. Custom building objectives don’t really cut it for me, since I mostly build square and rectangular basic objects and get baffled by instructions like build a two-story house, or anything more complex than that.

I’ve always wanted to try the industrial Tekkit/Technic packs, but so far have wussed out at the thought of having to learn additional sci-fi or automated machine complexity.

Surfing around their website though, revealed the Hexxit pack, which sounded like a more interesting fantasy adventure variant of Minecraft and slightly more manageable to learn.

Well, not really, but damn, is it fun.

I’m not sure how I’ve gotten along this far without being able to cut down trees at their base (TreeCapitator), or with a really neat map (Map Writer.)

The biomes seem quite a bit more varied, and there’s a ton more items and objects that smooth out some of the kinks of Vanilla Minecraft. Cotton as a source of string, fer example, or a use for zombie flesh by being able to convert it into leather.

Re-watching Pirates of the Carribean sealed the deal by giving me an idea for a roleplaying narrative that both made sense and should help smooth over some of the places where I tend to get bored – namely, being obsessively careful about not starving and not dying and ending up camping in one spot indefinitely, being safe as doornails.

An undead curse means that one can die and always come back to life.

I don’t have to worry about being forever self-sustaining with food, because hey, undead curse, suffering and starving is part of the deal.

A Wandering Jew sort of trope will hopefully get me to hoof it more across the world, rather than being very satisfied and comfortable where I am, thank ye.

And doubly hopefully, Hexxit will provide enough of an -interesting- world to explore, over plain ol’ Vanilla.

You can probably even recreate my map by using the same seed – which, unimaginatively enough, is “The Curse of the Albatross” without the quotes.)