Having spent a few too many days playing through two-hour long map meta events (sometimes, only to reach bitter failure), this weekend I found myself making only a few desultory efforts to taxi into an organised map before giving up.

“Eh, let’s give other people a chance to experience it and not hog a slot.”

“If it’s the weekend crowd, chances are likely their first few goes at it are going to fail anyway, given the learning curve and all that…”

“I could be doing this with much less frustration and failure a month or two later when more of the player population actually knows what to do.”

“This is wasting too much of my time when I could be doing other things.”

“Also, I’m nursing a headache and I don’t think I can withstand staying upright for 2 straight hours of middling ordinary play to razor-sharp focus right now.”

All the above ran through my mind and before you knew it, I’d dropped the taxi and ended up mostly in bed napping.

When sleep was finally impossible because the brain kept insisting it was time to wake up, I decided it was time to head back to core Tyria and catch up on stuff I’d been ignoring there.

Like topping off and completing the Fractals 3 mastery I’d been working toward steadily, given the news that Fractal rewards were getting tweaked a little in the future. (Well, that means I kinda need to have a basis of comparison and try out opening at least a few chests now.)

The most peaceful and still fairly efficient method of filling up the mastery bar that I know is solo killing of xp-laden ignored mobs.

So I popped some boosters, and ran around Cursed Shores (long time no see), Southsun Cove and ended up settling in Frostgorge Sound under the quiet, dark and deep waters killing all the things.

Sometimes, loving things other people loathe has its advantages.

I ended up finishing that rather quickly. In order not to waste the boosters, I turned my attention back to Pact Mastery 2 – at a more modest million or so xp – and managed to get that bar to completion too. Job well done, in just one hour.

Back again in Tyria after another round of naps, I started scanning the achievement and collection lists. Fractals and daily fractals stood out as something I hadn’t touched post-HoT. So I gave them a go.

Frankly, I must applaud the post-HoT fractal changes.

(Mind you, this is ignoring the reward aspect. I tend not to even keep track of how many fractal relics I’m earning when I play. I just do an activity, click all the chests, and only when I need the tokens, do I check my wallet to see how much I have accrued over time.)

Here I’m just talking about how much less of a pain it is, now that they’ve chopped up what used to be a set of three fractals, plus a final boss fractal.

Before, you were looking at a 45 minute minimum time investment, if you were lucky and got a decent group, or upwards of 1.5-2 hours for a not-so-great group. I’ve heard nightmare stories of 3 hour fractals, but I don’t want to think about those.

Now, especially given the guidance of a simple ‘daily’ fractal number, you just grab a group and go do that one fractal. Done in 15 minutes (give or take a few.)

If it’s the daily, you even get an extra bouncy chest to add on to the good feelings.

I open what I can with the free keys from the dailies, usually getting 10-15 silver junk plus some number of +1 infusions, and sell the rest of the chests on the TP.

If I feel like doing more, then I can scan the LFG list and either do two more single fractals to make up another daily, or jump on a group with more stringent goals (such as a specific string of two or three fractals) or a group that’s trying to do some kind of achievement/challenge.

I am especially in favor of the -certainty- factor of the new fractals.

I keep the Fractals of the Mists wiki open in the other screen for easy reference, and at a glance, I can set my expectations appropriately.

Ok, that group is asking for a 2. That’s Bloomhunger, easy peasy, I can do that.

A 22? Ugh, Cliffside. Eh… I don’t like all those vertical heights and chanter stuff, I think I won’t join that group today.

I didn’t realize it until it was gone, but I always had this subconscious sense of -dread- with pre-HoT fractals.

On paper, randomization of a dungeon sounds like a good thing, for variety and all that.

At the same time though, there was a lack of control aspect to it. You had to remember how to do 14 different mini-dungeons, on the fly, and you’d only know which one you faced when you were hip deep in it. No takebacks. Get through it, or give up the whole thing. Even if you could manage such a thing, you’d worry about your four other teammates, were they as experienced? Would they stumble?

And well, RNG being a cruel mistress, sometimes you got the worst possible combination ever, and the whole experience wound up being a massive hard slog through stuff that was tedious, long and/or challenging. No wonder I tried to avoid fractals as much as possible.

I feel a lot more openness and flexibility with the new fractals, now that they can be done singly.

You’re not stuck with a hopeless group for a marathon quest. You just complete one quick bite-sized challenge, and thank you, we’re done. Each fractal feels like a quick CoF path 1 now.

If you do like the group, and the group clicks and has the time, nothing stops the five of you from continuing further.

I joined a fractal group that had advertised itself as aiming to complete the Swampland challenge mote for the backpack, and that went by really well. A party member started asking about the Firestorm first achievement, another one asked “Hey, the next fractal is aquatic, there’s a challenge for that too, wanna do it?”

Before you know it, we went through the aquatic challenge mote, did the Firestorm first achievement, did the 5 minute time limit achievement for the Jade Maw, and made a pretty good attempt at the Cliffside 5 chanters or less achievement (didn’t get that one, we might have accidentally went through one too many chanters or the chievo bugged.)

They were still up for more, but my head was busy trying to pound itself out of my skull near the end, and I decided it was time for a break and another nap.

(And no, I have no idea why the last few days have been a sequence of minor headaches. It’s probably just a migraine, eye strain, lack of sleep, caffeine withdrawal or some kind of flu virus. Hopefully nothing more serious.)

The whole bite-sized collections making up a legendary is also a nice concept.

My first impulse on hearing that the fractal backpack was named “Ad Infinitum” was to laugh my ass off and nickname it “Ad Nauseam.” Which is what I imagined repeating -that- many fractals over and over would feel like.

Of course, when you actually SEE the damn thing being worn by an NPC, you start drooling at its shininess, and seriously looking at the collection page examining each task for its “doability” factor. 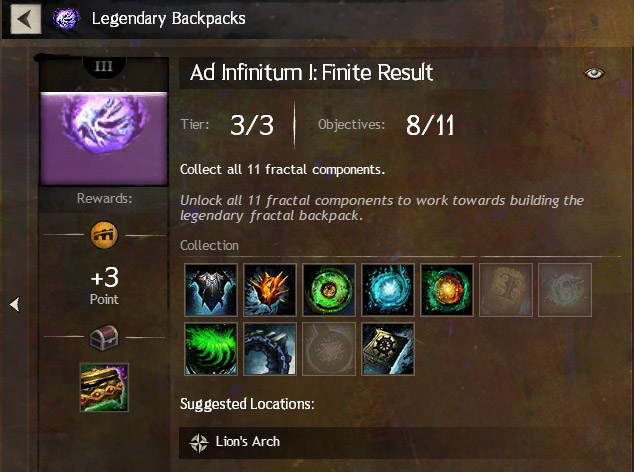 The first one’s not that bad, actually.

I got all of this in the space of a day or so (granted, that day spans two GW2 ‘daily’ days.)

The biggest time-limiting factor is the collection of 28 fractal research pages for a journal. If you do one fractal daily, it’ll take you 28 days, or a month-ish. If you get two fractal dailies done each day, we’re looking at two weeks. Which ain’t so bad, fairly reasonable a medium term goal, imo.

The biggest cost is the ball of dark energy, which you’ll have to salvage an Ascended weapon or armor for, I think.

I ended up staring at the Ascended chests collected over time in my bank and sacrificing a Dire stat weapon for it. At least I unlocked a free orange-colored skin in the process.

Over the next two weeks, I just need to catch one more volcanic fractal (to soak the ice elemental core I popped off Svanir a couple days before, and wondered then what the heck it was for) and one more swampland fractal to infuse a +4 infusion (easily gotten, given the amount of +1 infusions I’ve been receiving from the new fractals), and do mah fractal dailies.

I’m sure some of the challenges for the later backpack versions will get a little more tricky, but I’m enjoying the bite-sized nature of the process. It feels like you’re getting somewhere, for not that much cost or effort invested at one go, just a little gameplay here and there.