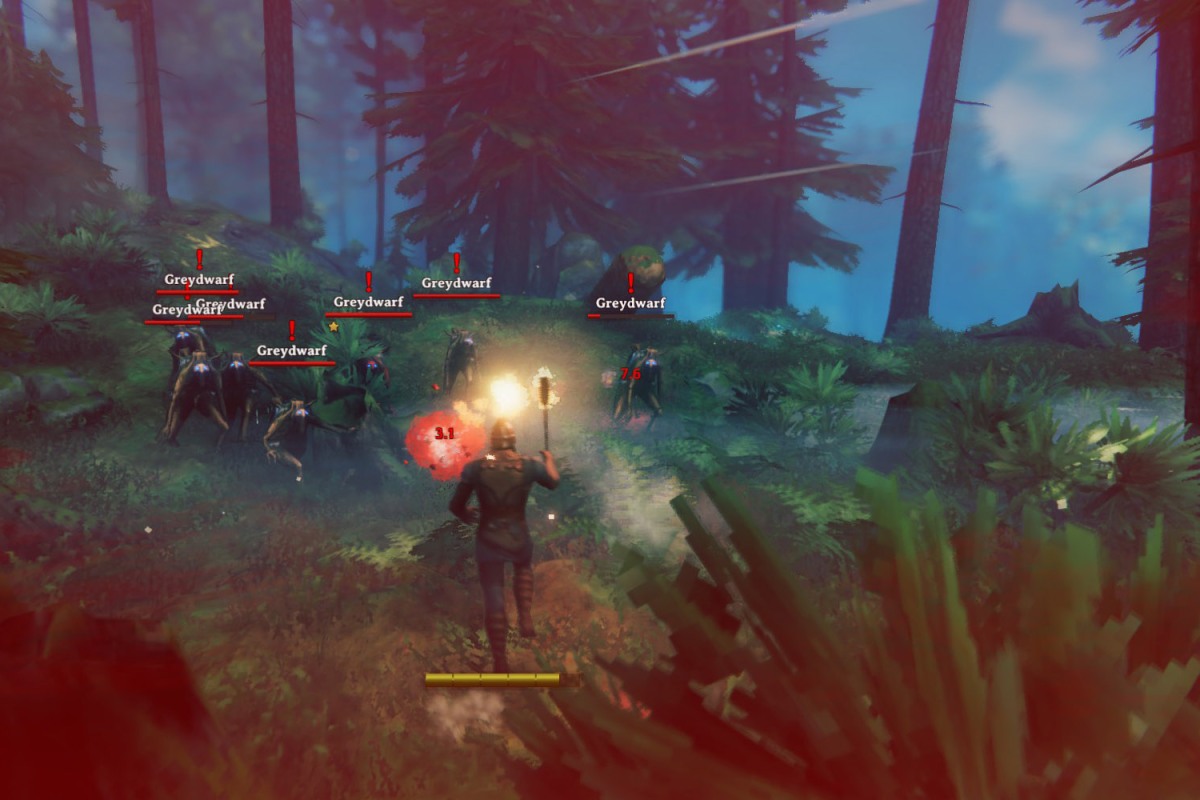 Moder is down, the blast furnace, windmill and spinning wheel is up, what’s left is dealing with the plains, sniping and kiting the Fuling villages, maybe Yagluth. Possibly a lot of repeating iron and silver runs.

I have a feeling that a good half of those hours were spent on travel time.

That’s my main pet peeve with Valheim, besides the resource and boss hp grind that feels balanced for multiplayer over singleplayer: the ridiculous amount of time one spends traveling anywhere – either running in start and stop bursts, or sailing, which is fun for the first couple minutes, and then shortly turns into zoning out while blasting Youtube tunes (bonus points if it’s Viking-related music.)

Don’t even get me started on this useless piece of wood.

I had thought to sail around the continent on my way back home, when it became patently clear I would travel faster running. Especially with a bit of Eikthyr boost.

You can see how far I got exactly in the southwest space – the raft was built at Camp West Shore, and the southmost landmark should tell you all you need to know.

The Meadows and Black Forests were especially bad because there was little reason to invest in significant infrastructure. Once you clear out a burial chamber, why would you want to travel back to that locale? Why spend time clear a road through it? Running is more efficient, but boy, is there a lot of running, just to and from different places.

Death recovery runs were the worst.

See the tiny amount of Swamp on the left hand side of the map? I backed off a respectable amount of distance to set up an outpost with bed – because I’m not an idiot and wasn’t going to run into the Swamp without some nearby insurance.

Alas, night fell, Greydwarves were everywhere, they pulled two Draugr in the midst of me trying to set up the outpost and long story short, I died. Flat Meadow Camp was the previous camp spawn.

There were a LOT of naked runs and deaths by various sources – greydwarves, the pulled draugr, a boar I didn’t see, while I struggled with the Take All UI.

I ended up leapfrogging a series of THREE outposts along the coastline just to get the initial foray into the Swamp outpost built. (Shortly after, I discovered that Swamp biome was a thin strip of nothing. The real Swamp was on the continent directly opposite. Sheesh.)

Eventually I figured out that whole “night” thing, and learned to build two points of insurance – one at continent landing, one nearer to final destination, and yes PORTALS, to make the whole process less onerous. But at the former point, Surtling Cores still had to be saved for the first smelter and kiln, alas.

Surprisingly, I liked the swamps. I might have scored a lucky seed (Yggdrasil – naturally), but the one I ended up settling on had 5 crypts. Travel through them was more engaging, because there’s at least varied danger. With 5 crypts and all that slowdown from wading through water, there is more motivation and reason for me to invest time building a short straight bridge to at least the center of the five crypts, in order to make the run back and forth a little less annoying.

But yes, there were still a LOT of runs back and forth.

Sea travel on a Karve or Longship is about the most enjoyable type of travel there is, but it gets tedious after the first couple of minutes and realizing via the map that there’s still three quarters of the journey to go.

You know the sail speed is too slow when you’ve cycled through a bunch of Stupendium songs on repeat loop and still haven’t gotten to your destination. (It’s also ridiculously ironic when you run through three plays of The Data Stream, a Cyberpunk 2077 song, just to make the Viking commute more interesting.)

Would it have killed Valheim to amp up the travel speed by about double?

(Yes, I bring portal mats to set up a portal on landing. I don’t think I could maintain sanity otherwise. Once one-way is enough. And a return trip for ore, if really reaaally necessary. There are a ridiculous number of Karves littered around the place on my map, as I would much rather build a new Karve than sail one back and go again. Alas, it still means running somewhere for Fine Wood.)

I stayed in Troll Hide armor for ages and only switched to Wolf and Padded when it became obvious the armor I was losing out on was about double the number, and I -still- find it slow going.

Maybe mods will eventually smooth this out.

I never found traveling in Minecraft that boring, even though the speed is slow, probably because there are so many varied biomes and resources and potentially useful stuff to collect and hoard (once you mod it with something like Biomes of Plenty and Pam’s Harvestcraft).

The issue with Early Access Valheim for now is that useful resources are few and far between. You run huge distances to collect thistle and berries. You run for eons to find un-regenable Birch and Oak for fine wood. Burial Chambers and Crypts and Silver Veins are sparse and spread out.

This is all very well for a logistics game of either shipping a collated amount of resources or processing the stuff at the source, but then the logistics game should be a little exciting and have some obstacles – like in the swamps with water and enemies. Not just running slowly through heaps of pretty but effectively barren space.

Either fix the slow or fix the barren. I think I could cope with one or the other, but both together is not okay.

Besides the admittedly masterful use of lighting and color to create a wonderful aesthetic, I think they’ve hit upon something interesting with the building system.

It’s slightly less finicky than ARK, approximating more of that easy-to-stack-and-build structure of blocky Minecraft and its ilk. The anchoring to the ground and gravity stuff helps to encourage building in logical, structured patterns, while still allowing room for some loose ridiculousness here and there.

Well, how else was I supposed to get Gunk off this tree?!

The screenshots of other peoples’ builds are, as usual, far surpassing anything I could ever dream of building. This is not a new thing. Been that way since Minecraft.

It’ll cut down on the boring sameness of running everywhere with nothing interesting in between.