Where did September go?!

You know it’s a busy month when you sit down and can’t even remember half of the things you were doing then. Either that, or I’m getting older and my brain cells are depleting even further.

Part of it has been real life – peak periods at work, visiting relatives, trying to cultivate more of an actual book reading habit back into my life, and part of it is too many games releasing content at around the same time.

The primary game has been Path of Exile this season.

Blight League has a tower defense schtick going, which mostly means hordes of enemies coming in waves for you (and some towers) to kill before they reach a central point you’re guarding. The loot for succeeding is plentiful, incorporating both drops from the mobs you kill, as well as special treasure chests to open once victory is attained.

The build focus for buffing this time around are minion summoners.

This is a match made in heaven because I’ve always enjoyed the PoE summoner – a wave of plentiful minions that engulf enemies, tangling them up and giving them the death of a thousand paper cuts from multiple sources.

Except now the minions can be buffed to be faster and attack more quickly, and those paper cuts are now significant sword slashes in their own right. Plus more seems to scale based on the gems themselves, skill traits or more craftable gear, instead of requiring specific unique drops.

All in all, it makes my staunchly SSF playstyle a little more viable, pushing up the power potential of such builds, while possibly capping the more traditional “trade for perfect gear to reach insane heights” type of build. Those folks might have something to complain about, but the beauty of being SSF is that I don’t have to care – there is no competition, economic or otherwise, between them and me.

The former is a definite. I hit level 90 the other day. This unlocked an account achievement for doing so. Progress milestone for sure.

Between spectres, zombies, vaal skeletons and carrion golems in an adapted Speaker for the Dead build, the power potential is quite off the charts in my limited experience. I did a normal Atziri at a super fast pace with no deaths – something I used to struggle with, often dying several times to flameblasts. I did a low level Shaper stronghold, I did a low level Elder fight, taking out the Elder Guardians for the first time ever. (More achievement unlocks.)

I don’t know if I’ll ever reach the Uber boss levels. The necessity of unlocking so many maps may be a stopping point, given my time constraints. We’ll see. From a build standpoint, it doesn’t seem like the limiting factor right now.

I’ve been enjoying the latest iteration on Master missions as well. It’s become less random, storing up the dailies into a sort of “banked storage” system, so that you can miss days and then crank through a bunch of them at once. You can also choose to concentrate focus on one type.

So if you feel like romping about the Omnitect’s temple, you can bank up a bunch of Alva missions and then feed maps into it, guaranteeing you Alva encounters per map, and quick progress towards a temple visit.

Or if, like me, you feel like exploring the depths of Delve, then you’re running Niko missions non-stop in between mine explorations, in order to get sufficient voltaic sulphite to go even deeper.

Presumably, if you’re an 18 hour a day streamer, you might actually run dry on all the master missions and have to go back to the randomness of whatever a map decides to offer.

As someone who can only play PoE for 1-2 hours a night, that is absolutely not a problem I’m running into – quite the opposite, the specter of “wasted” potential when a to-be-banked daily hits the storage limit is far more possible for me.

Fortunately, I’ve developed an immunity to this sort of perceived “loss” already. One has to. I play GW2 (have you seen its dailies tab these days?) I play Warframe. I play Harry Potter: Wizards Unite and Pokemon Go. All of them have dailies for their more engaged, hardcore players to chase. If I attempted faithful completion of all of the dailies -daily-, I’d probably have to be a student, a streamer or unemployed. Not to mention, go nuts in short order because I’m not that innately obsessive-compulsive or to-do-list-manic.

So I’m good. I’m just chugging along, doing a couple maps nightly, aiming for short master mission goals on a whim, enjoying the present and the churn of hundreds and thousands of mobs meeting -my- personal tens of mobs and dying.

At nigh unto the same time, GW2 released the Prologue of its newly renamed Icebrood Saga.

It seems to have been warmly welcomed all around. (I mean, if you can evoke a cautiously optimistic response from Endgame Viable, you gotta be doing something right.)

Mind you, the GW2 subreddit is still variously on fire from a subset of the raider subset, unhappy about ‘easy mode’ strike missions, their ‘challenging content’ preference being ignored, class balance being effected with a sledgehammer… on the wrong targets entirely, being potentially forced to pay for worse functionality on in-game build templates when they’re already used to a far better free third-party option, and so on.

(Not all of their unhappiness is off base – I am personally really pissed off about my already weak-in-raids Scourge being made even weaker and clunkier to use, to the point where I don’t think I dare risk teammate unhappiness any further, while the top of the line condi option remains an unaffected outlier – but there’s a definite echo chamber effect going on.)

Before October’s skill “balance” patch though, there was Grothmar Valley. And it was good.

The Metal Legion concert has been a spectacular example of an open world meta event that harnesses the dynamic event system to superb effect, uniting everyone – hardcore, casual, mid-core alike – in one goal and giving everyone warm, fuzzy community feelings instead of “lol, your dps is 10x less that of mine.”

The golden fields of Ascalon has always been a sight near and dear to any GW1 fan. It’s the first thing you see in the tutorial. It’s what you promptly lose post-tutorial in the Searing. It is the Shire equivalent in Tyria. It is where you begin. It is where you’d love to come back to when your journey ends. It is home.

Grothmar Valley being right smack in Ascalon gives a massive nostalgia homecoming kick to those of us with enough history to remember it.

(As an aside, I was amused by a Redditor’s comment that GW2 officially now has players with a longer tenure than the developers. Maybe not quite yet, I assume GW1 had -some- amount of development time, possibly years, before opening up beta weekends to players. But I do remember playing those beta weekends. We’re getting there.)

At the same time, Grothmar Valley being populated with charr, and a very dangerous sort of discontented charr and a Hitler-esque leader to follow (this from a charr main player) pushes us into the future, hinting at the direction of the saga’s story.

It’s…promising. (Alas, given prior track record in executing, that’s about all we can say for the moment. We’ll believe it when we next see it.)

In the meantime, I was content to mess around doing all the things in Grothmar Valley. Catching up on crowd-necessary achievements while events were still populated. Playing around with races. Wandering the open world like how GW2 used to be from lvl 1-80. Jumping in on a whim for quick and painless public strike missions. Getting caught up with Ascended cooking to 500, which I’d neglected in the off-cycle.

As is usual, something in the games line-up had to give and the loser for the month was Warframe.

Though frankly, they’re laughing all the way to the bank.

I’d finished Nightwave series 2 early, getting the outfit I wanted, so I felt happy enough to drop it for a binge in Path of Exile.

I’d heard about Saryn Prime and Valkyr Prime unsealing from the Prime Vault, but having just come off a relic grind for Wukong Prime and wanting -both- unvaulted Primes really badly with none of the time investment, I took a hard look at what was offered in the joint package.

Nothing was a repeat. I kinda needed to restock some platinum. The whole deal was “only” $60 USD, as opposed to the more premium $80 or $140 Prime Access packages for new Prime warframes.

The ending of this story is predictable.

Some rationalization later, some clever brain trickery promising myself to work hard on real life matters I’d been procrastinating on for a reward, I gave Digital Extremes $60 to not play their game for September.

Maybe in October I’ll enjoy the fruits of this. Atlas Prime is out and I’ll probably relic grind for that. But I’ll have to finish up a bunch of other things first to make time for Warframe again. 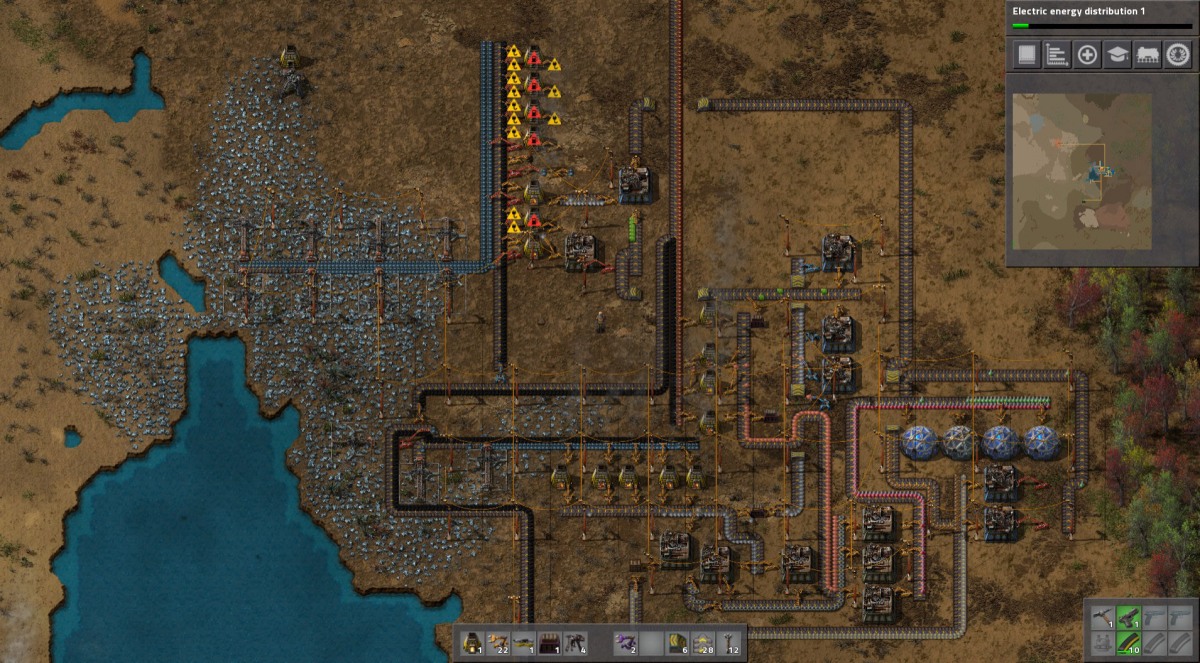 Then there’s single-player games. I’m racking up an alarming number of “want-to-plays.” My computer is nearly out of disk space on three hard drives. I need to make myself sit down and sort through installed games and so on, but seriously, who has time for that?!

I can’t even sort through my Path of Exile stash, my GW2 inventories and my Pokemon Go critter collection.

I took a few days “vacation” in Factorio beginner land. The learning curve was prohibitive. Eventually I gave up any hope of potentially making something resemble anything close to efficiency and embraced a train of thought that ran ‘if it actually connects and makes a circuit and -runs-, it’s good enough.’

I have come to the conclusion that my brain works in convoluted ways and what one sees on the screen is a reflection of this. I am not an innately ordered or orderly sort of person.

Re-discovered (one year late, again) a stunning Portal inspired song from Youtuber Harry101UK and TheStupendium – The Android Hell Blues. Did wonders for the couple of days I was in a blue mood to have it on repeat loop and wallow in jazzy, dark humourous, clever wordplay while nose to the grindstone.

Re-reading the Blades in the Dark tabletop RPG and pondering in sporadic intervals over interrupted days if I can actually get some solo RP gameplay going, to actually enjoy story-based gaming that video games can’t seem to get quite right yet.

Bought a bunch of Dave Graffam papercraft models at $1 each, on DriveThruRPG sale, in the hope of getting crafty again and making a mini-medieval city. Maybe in November. It’s a really hectic time at work this season.

Also recently watching CohhCarnage play through AI: Somnium Files, a visual novel-esque detective anime game with more interaction than a standard VN, and being somewhat drawn to it. The current price is a definite not-now though, so the craving has been displaced to “How about actually playing through some of the other older games of the same developer that you -actually- own but just haven’t gotten around to?”

If wishes were fishes…

Bleh. Back to squeezing in productive “survive life” to-dos for a little longer and playing catch-up on everything else.