It’s been hard to blog when one is increasingly falling out of sync with the modern established trends of gaming – celebrating finished games, completions, collections, achievements, accomplishments, goals, and striking them off a to-do list or backlog; or placing high challenge and impossible difficulties on a pedestal of ‘hardcore’ and venerating such attempts; or competitive striving to be better than others or to beat your own personal benchmark or otherwise obsessively bettering oneself in some way.

I could do them, I like letting my secondary Achiever out now and then on a long leash to collect and complete whatever the hell they feel like, but it’s not a primary preference.

Every time I try to make it a primary priority (or don’t try, rather, but absentmindedly let it take over), I wind up feeling unbalanced and not quite myself.

I’m not a deep-diver and have never been. Where others value depth of expertise, I walk the rebel road of breadth of interest.

In a discussion about gaming enthusiasts, a random Reddit stranger pegged me as “eclectic” and the “gaming equivalent of a Renaissance polymath”, which I thought was rather astute of him and something I was happy to claim as part of my identity.

It just makes it damn hard to write frequent blog posts if you wind up playing 8 games for 0-2 hours and finishing none of them or doing nothing of note.

Unless we attempt yet more experiments in nonstandard blog formats.

Journals and diaries tend to be about the past – what you did, what you felt, what you thought. Reflections and impressions.

Looking towards the future turns writing into wish lists, hoped for goals or plans, dreams, potentialities.

Both work, but I want to do neither. At this point in time, I’m more interested in capturing the present. Celebrating the now. Reveling in the process and the journey, rather than fixating on the destination.

A streamer or a Twitter user can snapshot the moment in time in finer increments than a blogger, I’ll grant, but I am interested in neither videos or short pithy remarks.

So my blog post will inevitably skew slightly towards the past, but let’s make it about the recent past.

Let’s avoid as far as possible a laundry list of “I done this” “I accomplished that” “I finished X” – not because it’s wrong, but just because I’m sick of contributing to the majority Achiever mania and implying that it’s the only way to game.

I want to forge another path – a Scanner path, going with the flow, being the honeybee traveling from flower to flower getting what it needs and flitting off, of using games for the purposes of play, sampling desired experiences without feeling the obligation to be married to them for life. 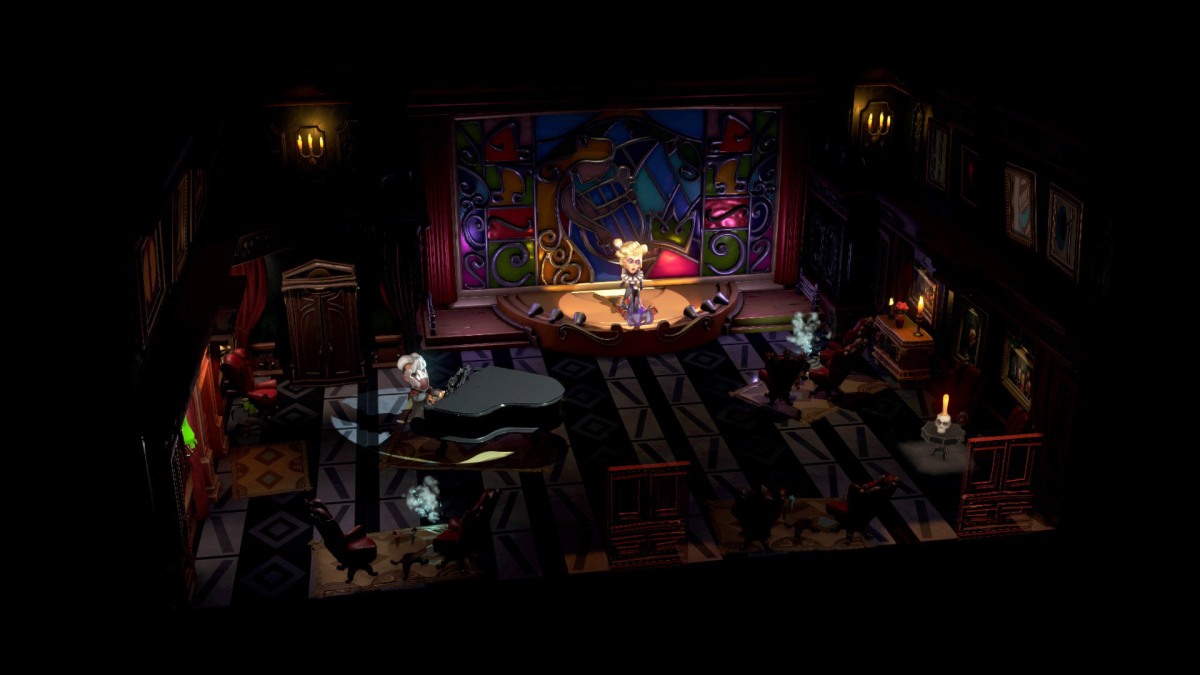 The planned heading for this and other games was going to be “Currently Playing.”

Then the weekend hit and the story ramped up to the point where I ended up “just one more turn”ing until I now have to convert “Currently Playing” to “Just Played.”

I guess that’s how you know the game is good.

The Sexy Brutale is an oddly named game which is far from a typical person’s first impressions of a game with the word “sexy” in its title.

It’s only sexy in terms of its presentation – the stylized aesthetic that is a little bit noir, a little bit colorful Las Vegas casino and a little bit Grim Fandango-esque, accompanied with a wonderful soundtrack that differs subtly from locale to locale and some of the most important sound effects I’ve ever heard in a game – they foreshadow revelations you’ll discover and remind you of events past.

The Sexy Brutale is actually the name of the casino that plays a central role in the narrative. The narrative, meanwhile, is the player’s job to cobble together by re-living the events of a fateful day where a bunch of people died and subtly tweaking things to change the plot. If only for a moment, before your focus has to move on to other people, in order to uncover the true mystery of the casino mansion. 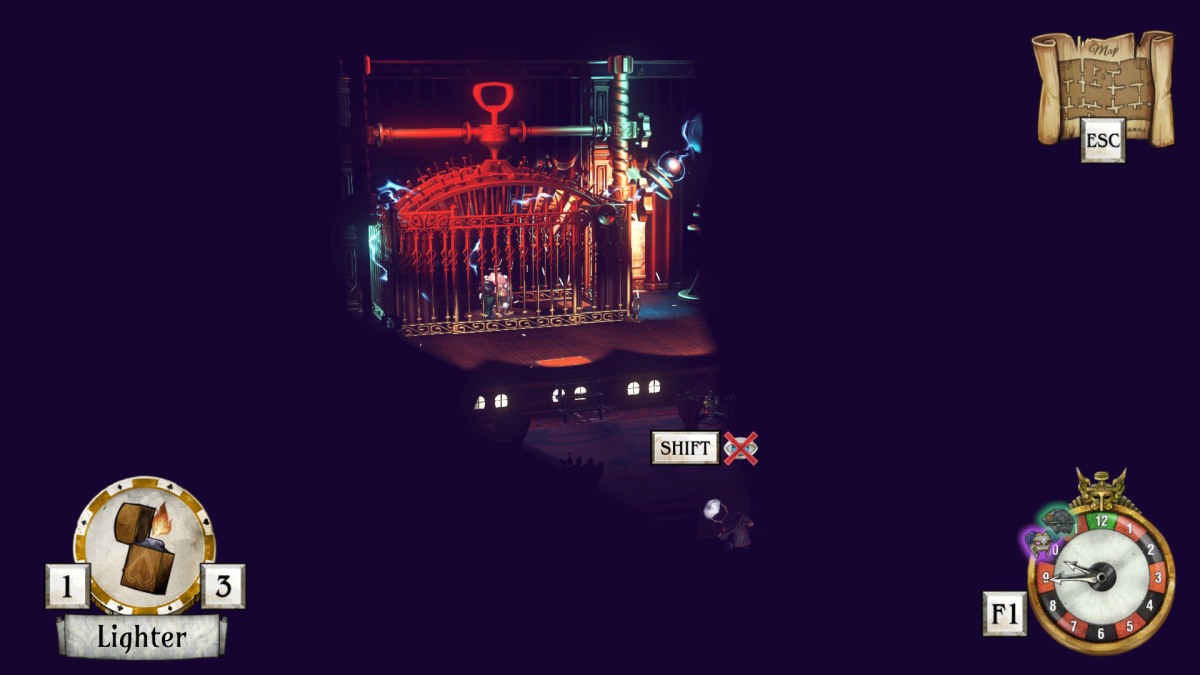 Gameplay-wise, it is a little bit puzzle, a little bit adventure, mixed with a unique sprinkling of playing a ghostly observer – you can never interact directly while the key NPCs are experiencing their Groundhog Day events, but peek through keyholes, hide in cupboards, overhear conversations and tinker with items in uninhabited rooms.

If there was one thing I didn’t like and where it got a bit tedious, it was hoofing it from room to room in the later stages of the game, where most of the mansion is opened up on the map, making paths much trickier to remember and navigate.

But by that time, the mystery of the narrative had drawn me in and I urgently wanted to know how it ended. So I put up with it and I found out. And I enjoyed it. Fitting ending. Worth Playing. 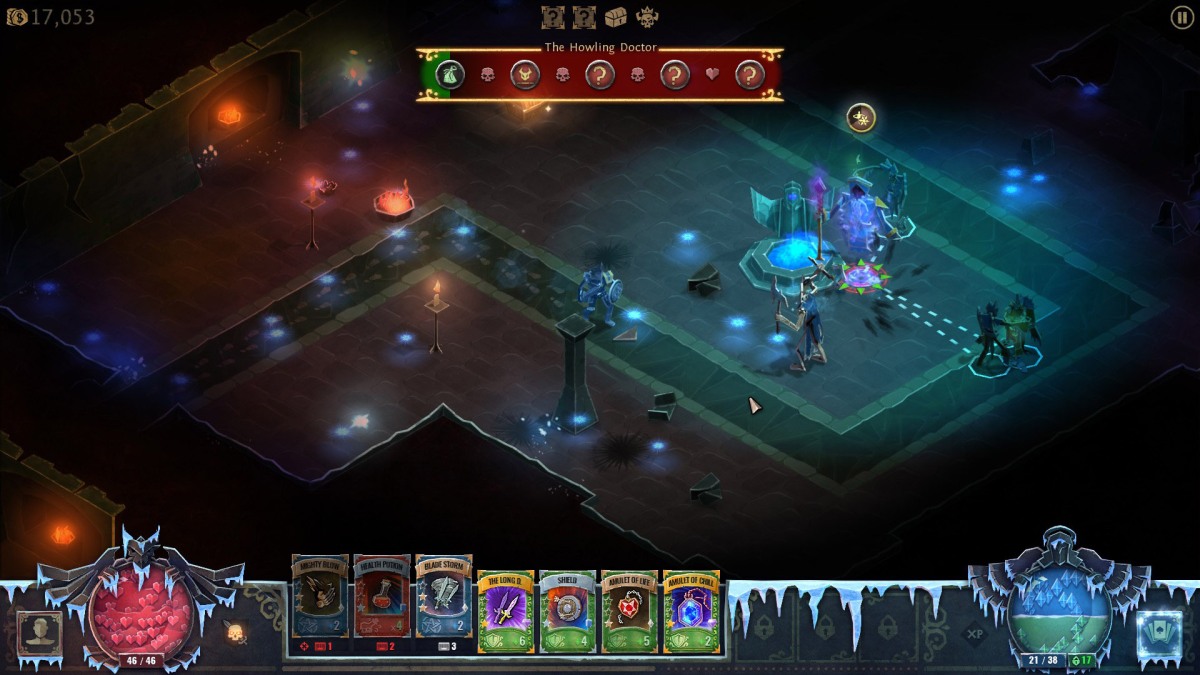 Picked it up via a discount coupon offer tie-in with Darkest Dungeon. A simplified but fairly elegant mishmash of game mechanics. Papercraft Diablo is the aesthetic.

It has an “on-rails” movement mechanic but with the ability to go forward and backward, which distills dodging and evading to something like One Finger Death Punch, far more reliant on timing and a little pre-planning, than the typical free-to-evade in 360 degrees movement of most Diablo-likes. Somewhat less reactive and responsive than One Finger Death Punch, which can make movement a little frustrating but incorporates some necessary risk (and therefore challenge) of unavoidable hurt when fighting.

Inventory and skills are in a card game style format – selecting and swapping from a deck of available possibilities, and upgrading them slowly.

Most notable feature (to me) is the explicit ability granted to the player to choose the scope and difficulty of the procedural dungeon to be attempted, while clearly spelling out both the potential gains and the estimated time to complete (as based on prior runs.)

More games should offer such courtesies and respect of a player’s available time.

Very Small dungeons are still my current go-to, getting a short spurt of entertainment in, before moving on to other games. One can easily imagine more committed players with ample free time going for long marathons.

On the Cards / Eyeing / Soon™: Frostpunk, Superhot, War for the Overworld

One thought on “Celebrating the Now”