Delve league is out in Path of Exile, and I’m right back in the swing of things.

The league is named for the supposed first of potentially many “infinite” dungeon type systems that Grinding Gear Games may experiment with or work on.

Though with the old Atlas of the Worlds endgame of ever expanding maps that open into more maps that link yet more maps recursively, you’d think GGG already had one.

That, and an old race event type called Endless Ledge which repeated a single map over and over with increasingly insane monsters until you wiped or ran out of race time.

But Delve is a little more sophisticated than Endless Ledge.

You get a map from which you select your next target location. You could plot a path that might take you laterally fighting roughly the same level mobs and earning various treasures and currency, or chart a route that takes you delving deeper and deeper, with presumably increasing challenges. 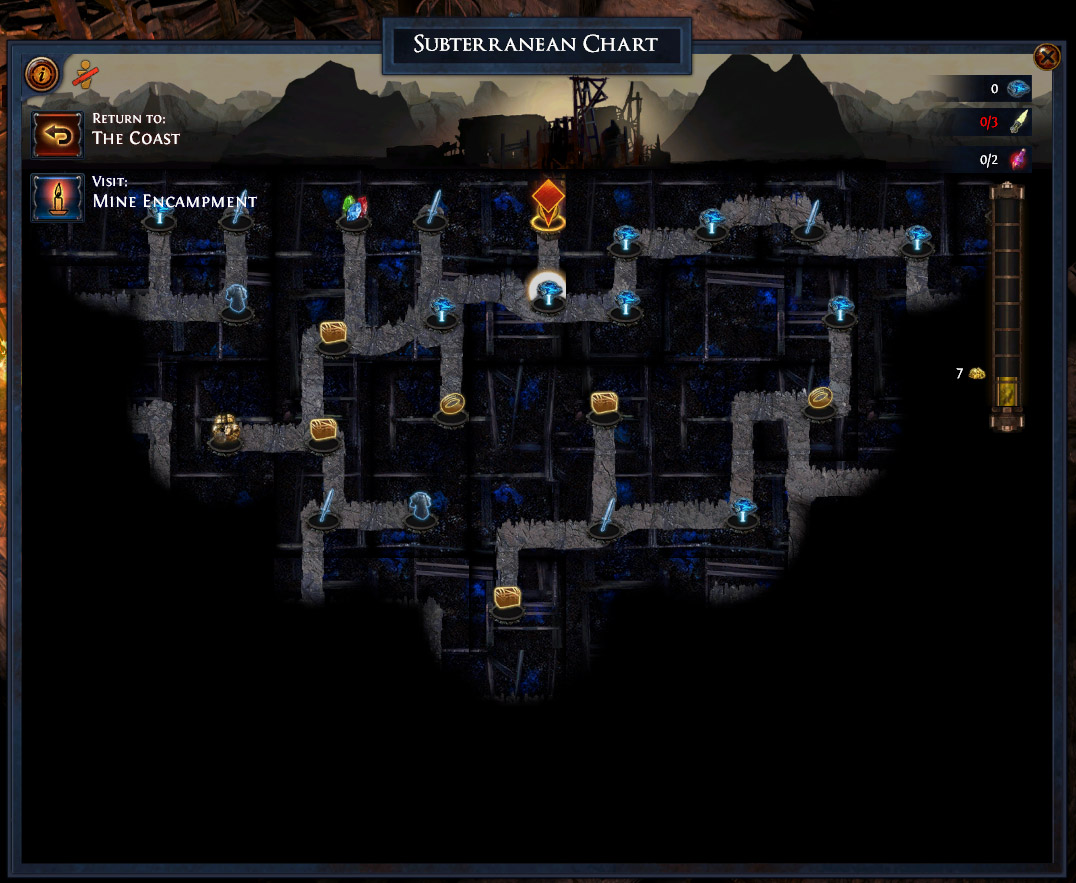 I’m nowhere near a respectable deep level yet, but I’ve encountered a change in biome here and there.

At each stop, there are quick encounters with various swarms of enemies or some mini-bosses like rogue exiles to fight, and a mini-treasure awaiting.

The Delve system has its own currency of Azurite, a resource that for once isn’t a currency orb or physical object represented in Path of Exile to clog up your stash, but an automatically vacuumed resource that beelines directly for your character magnet-style and drops into your “wallet.”

At present, there are three things in it. Azurite, Flares and Dynamite.

Azurite is used for crafting Flares and Dynamite, as well as in a Delve specific progression system that increases your pool of storing these various resources, expands light radius, damage done by dynamite and so on.

The mine, you see, is dark. Very dark. So dark you might get eaten by a grue.

If you step away from the light for a short time, a dark debuff stacks on your very quickly and eats away at your health VERY rapidly.

So you’re usually following the precious light-bearing Crawler on its path from one stop to another, with occasional risk-reward forays into the pitch black.

The Crawler is fueled by a resource you can only harvest from the surface, so it is still necessary to ping pong back and forth from the old maps to the new Delve and back again. 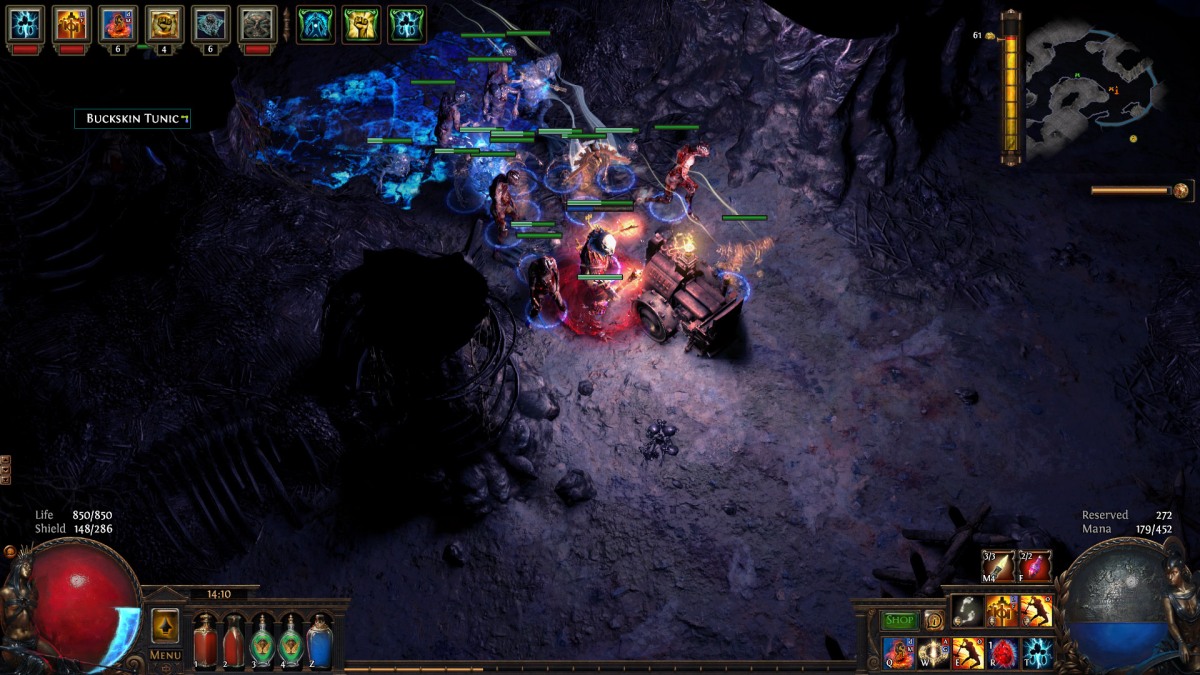 The Delve league also brings a number of less obvious but significant changes.

The devs apparently had to do some stuff in the lighting department to support Delve’s light/dark mechanic, and they managed to pull off light beams on objects at the same time.

Customable light beams, of different colors, on any darn thing you choose. If you can imagine it, you can tweak it.

Most people don’t quite have that imagination, me included, so we’re content reaping the benefits of some very hardworking players with a downloadable item filter – Neversink’s Filterblade, that also eases the work of customization with a whole bunch of options you can tweak via friendly website UI (as opposed to messing with textfiles and esoteric item codes).

Equally mind-blowing, for me anyway, was a little patch note that said “You can now right click on any stash tab in the drop down list to send it all the way to the left.”

When you’ve bought more than a few stash tabs, all your special tabs for currency, maps, divination cards and so on all wind up to the far right at the start of every league.

This is terribly depressing because for many people, me included, it makes the most sense to have the currency tab – something that sees a LOT of use – as the very first thing you want to access on the very left of all your stash tabs.

Previously, one had to drag and drop, scrolling past dozens of stash tabs (I have around 40, what can I say, I’m a hoarder and a reluctant organizer) to get ONE tab where it needed to go.

This league, setup just involved a few right clicks and short drags, and that really motivated me to get off on the right organizing foot.

We’ll see how long that lasts.

Build-wise, I decided to break from recommended build tradition and experiment with my own, since I started relatively on time this league.

I would still be following the main major changes. Last league, traps and arc got reworked, so arc traps was totally in.

This league, one major highlight is the new melee summoner archetype with a number of new skill gems to support this playstyle.

This is a dream come true. I love melee characters. I love doing damage. I also love supporting with buffs, offensive and defensive.

And I am totally for an entourage of questionably helpful AI-controlled killer mobs because I am a lazy bastard who likes to just walk around and have things die. (I played ranged summoners twice fairly recently and loved them.)

I get to have them all together, you say? 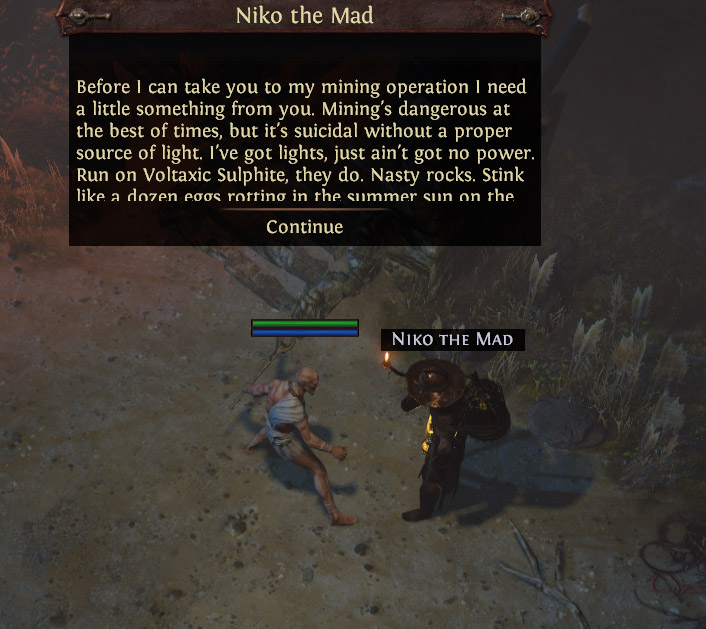 Well,  the catch is the class that makes the most sense to juggle strength for attacks and intelligence for minions and auras is the Templar, the naked old man above with no pants.

His Guardian Ascendancy was also reworked to support this melee summoner playstyle, and after studying both Necromancer Witch and Templar Guardian – the two classes that start relatively close to the stuff I wanted in the skill tree – it was decided that I really needed to use the Templar.

Microtransaction outfits to the rescue.

The Templar has a very holy, “God”, paladin-y vibe going for him, but it seemed a bit boring to go down that holy armored cleric route.

By chance, I combined a blue Harpy helmet I picked up last league with a red Gore body armor from a very long time ago, and thought “Hrrrrm…”

Red and blue is not really a color combination I’d go for, but it so happens that a lot of this character’s skills are all yellow. It’s high contrast, as they’re all primary colors, but there is a certain color wheel logic to this.

It ended up working quite well, as my original idea was to try out the reworked Dominating Blow skill gem.

I was also going to swarm things with basic zombies as a minion meatshield – something I’ved used before for fairly decent effect with other characters (at least up to the point of higher level maps where one would then explode without good gear/defences augmenting you).

Dominating Blow wasn’t available till level 28, so in the meantime, I used the new Smite skill gem, in conjunction with Raise Zombies, and also picked up Holy Relic.

Dang, they were good. Smite lets you attack something, and then lightning strikes will hit other mobs. At the same time, if you hit something with it, you and your allies get a short term aura buff that adds lightning damage to your and their attacks.

Slot in the Ancestral Call support, and you get two ghostly helpers that randomly attack 2 nearby enemies at the same time, essentially tripling the Smite attack.

Holy Relic meanwhile will trigger an AoE nova spell on enemies that you hit with an attack (expanding the range of damage of the tripled smite attack) and put on a life regeneration buff that works immensely better on minions than you.

Some experimentation with the slotting of supports for Holy Relic suggested that minion supports could be put on it, increasing physical damage, fire damage, etc. Presumably, this only takes effect when the holy relic buff is on.

But as a melee summoner, you were going to attack -something- anyway, right?

Which in turn buffs all your little minions around you? Whee.

The synergy. Too awesome.

To add icing on the cake, Herald of Purity is the new herald skill gem that adds physical damage to you, buffs minion damage, and creates Sentinel of Purity minions when you kill enemies.

There is a Summon Phantasm on Kill support that creates ghostly ranged phantasm minions – something I was using to very enjoyable effect with my prior SRS raven necromancer.

It got to the point when I actually reached Dominating Blow, after some experimentation, I decided that the minions it created were a little more awkward to play around with than the existing Smite-Nova/Zombie-Phantasm Smash I already had going.

Guess we’ll save that for another build.

The rest of the build choice is a little haphazard for now. Lightning golem just for the attack speed and the off chance its aura might buff a minion or three.

Leap slam with fortify seemed like a decent movement skill. I am also tickled by the fact that both Smite and Leap Slam sound very similar, like the thump of a drum. It all melds with the witch doctor/shaman theme of Thuum Thuum of Doom, and then buffed zombies eat your face while lightning smites others in the background.

At level 46, I am feeling the shortage of life just a tide, but there are several life/energy shield nodes coming up in the planned tree, and my gear sucks for now, so we’ll see how it goes and adapt from there.

The fun is in the guesswork and tweaking things as you go along. If it works, you learn and remember. If it doesn’t work, you die and then you learn.

Most importantly, I am having a blast. 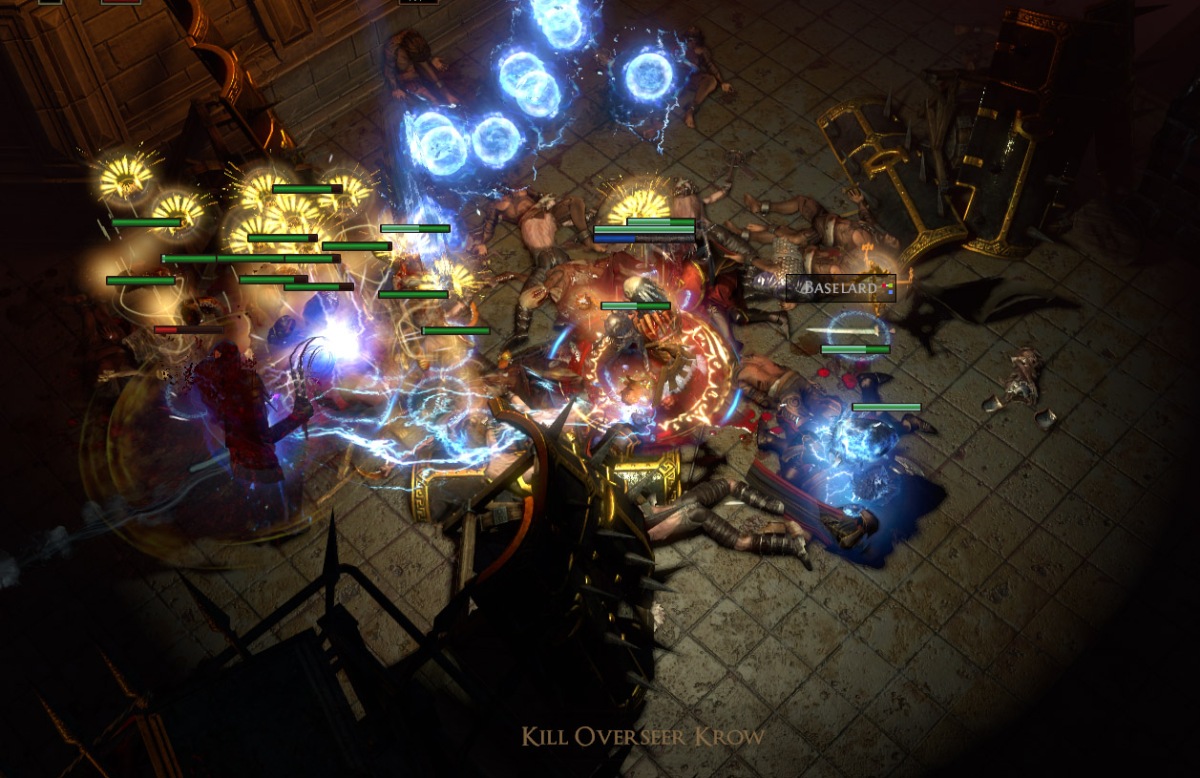 And that’s the crux of it.