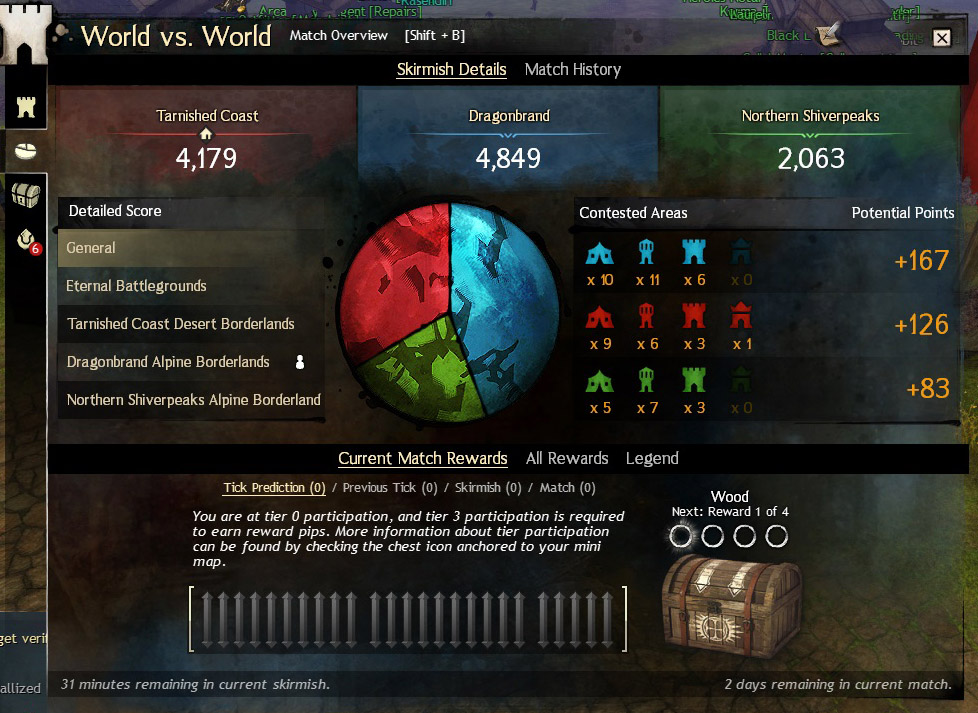 Bit more shine to the UI. Really quite nice. They put in the reward chest system that was used in PvP leagues.

So now besides upgrading your own personal WvW rank and earning personal reward track progress, the other set of reward chests rewards your participation in your world’s overall progress (or lack thereof.)

People with more WvW rank earn more pips per tick. Ancient plebians like myself only earn +1 pip until we reach rank 600.

Your world’s position in the current skirmish gives you +1, +2 or +3 pips respectively to add onto that. So there’s more of a reason to fight for the score now.

Tonight’s SEA time was expectedly disorganized. It will take at least a week, probably more, methinks, before Teamspeak use and organized zerg fighting becomes fun enough for me to enjoy.

I spent most of my WvW time amusing myself by seeing if I could successfully run away from “yep, we’ve lost, there’s 5 people remaining to 25+ surging around them” scenarios (if I waypoint alive, I win… 50% success wasn’t bad!), and mostly soloing or duoing or trioing sentries and camps back and forth with the 1-3 chaps who had the same idea.

It kept the +195 personal WvW rank tick healthy, and it kept me happy and not raging at lost battles, so I’d call that a success too.

Now and then I’d jump in to the “main blob” for a fight or two, with periods of limited success on groups that were temporarily smaller in number (got split up from the main zerg or whatever) but then our disheveled blob would get run over by Dragonbrand – which is to be expected, they’re especially numerous in this timezone and no doubt they actually had an organized guild driving them.

I had a bit more fun doing independent roaming.

I had a fun and funny encounter with a Dragonbrand elementalist who had zipped off from a battle they actually lost at Anzalias, and he/she had cleverly sped up north to the supply camp and Mendons.

Because I was busy roleplaying a braindead dirty PvEr who would stalk and chase one guy to the death, instead of obediently sticking with the commander (sorry, commanders not on TS = cannot zerg fight = I ain’t got no loyalty for you, deal with it), I decided it would be more amusing to try and catch up with the ele.

I whirlwinded and rushed and balanced stance swiftness, trying to keep him/her in combat so they couldn’t waypoint. They on the other hand had plenty of swiftness, and kept dropping static fields that would, alas, stun me.

One other very bored ally had joined me in the chase. Together, we ran the ele all the way past Mendons, towards our spawn, where the ele jumped off a cliff….

… and hit the ground at 3% health remaining and sped off.

Both of us had no choice but to stare after that damn ele’s cloud of dust – ain’t no way we were surviving that leap, we didn’t think.

The other guy gave up, I trundled my way back to our garrison absent-mindedly, when I noticed the little orange dot -hadn’t- waypointed, and was dancing around somewhere between our spawn and garri. Huh. Well, ok… since I was going that way anyway…

I wound up cutting off the ele again. It was like, HAI, THIS IS YOUR CRAZY FIRE CHARR WITH THE PREDATOR RIFLE AND NOTHING BETTER TO DO COMING TO LASER PEW PEW YOU AGAIN.

Ele took off running. Again. Led me on a chase that I suspected I was going to lose, but look, I’m bored, I will chase you for fun, a willing cat in your Tom and Jerry game.

Just as I waypointed to Overlook, what do you know, that orange dot -still- hadn’t waypointed and was busy making a loop around Ogrewatch.

“You know, self,” I thinks, “Methinks they think they lost me. And are going to try and solo Pangloss now.”

(Either that, or they were a newbie that was entirely lost and didn’t realize they could waypoint. Also possible. Or both.)

So I hop down from Overlook, jump onto the convenient building roof, and down, and zip past Ogrewatch Post to check on Pangloss Mine.

Yep, found them tangled up with some NPCs. No, I have no shame.

Did salute their corpse later though, for all the fun I had. I hope they had fun too. It was certainly more amusing than bad zerg rushing and repeatedly dying and feeding warscore to the enemy. 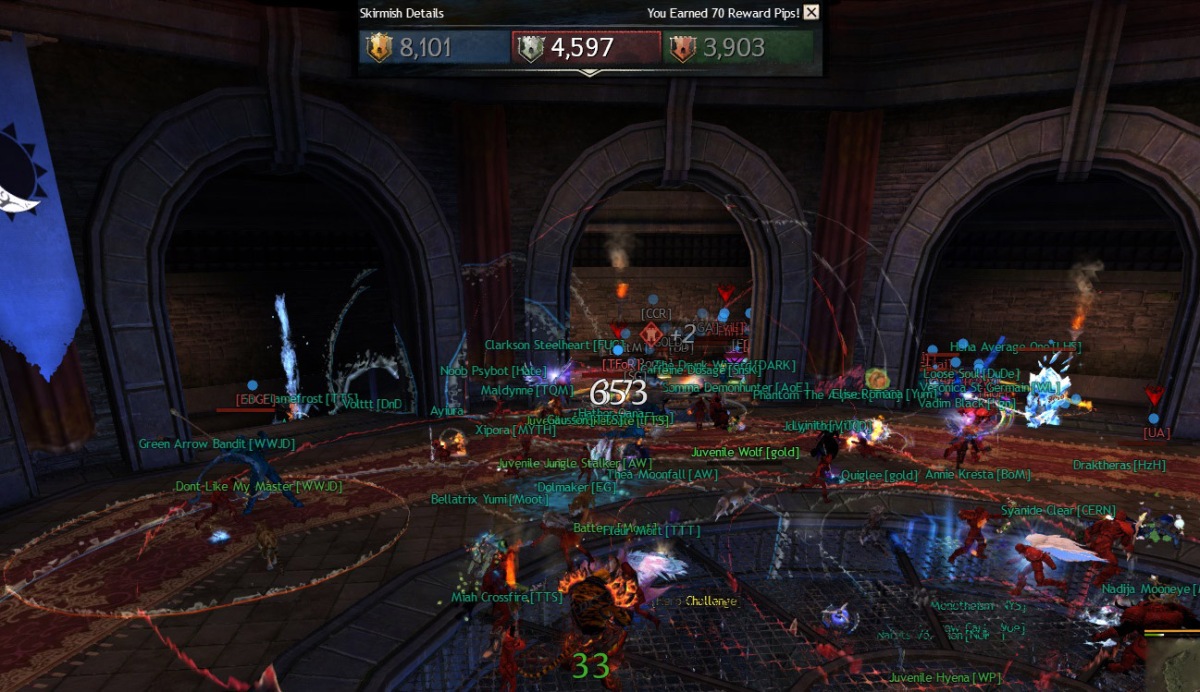 One of the limited success zerg engagements where I followed the commander into Stonemist, against my better judgment, having seen and knowing very well that the Dragonbrand zerg was rushing up and into Stonemist from the southeast entrance (as the entire blob of orange dots passed the sentry).

As expected, our zerg barely got to touch the keep lord for 5 seconds, before the defending zerg was sweeping in. This particular commander had slightly better tactical battle sense than the previous one, and shooed the zerg (I use that word deliberately, it’s like herding headless chickens at the moment) up the stairs.

Taking advantage of the chokepoint and the overenthusiastic extending of the drunk-on-power opposing zerg, the frontline managed to get shot to pieces by a bunch of stranded cornered skirmishers who weren’t going to kindly group up for AoEs and knew they were going to die once the other zerg managed to ball up and force their way in, but by hell, let’s see how many we can take down first.

We actually broke the first charge. This is notable because it was so unexpected, given prior demonstrated performances. Chokepoints are magical things. It took the other zerg a bit of regrouping time and the second charge before it was the end.

I tried to do my sneaky whirlwind / rush past the oncoming horde and sneak down the -other- set of stairs, but alas, undisciplined zergs have stragglers and two stragglers easily made mincemeat out of me after having burned all my cooldowns getting out of the mess. Welp, I tried.

If there’s one thing I miss about not playing in NA timezones, it’s the lack of inspiring commanders that make zerg fighting fun, win or lose.

Still, there are ways to have a fun time and high morale regardless of the score – if I lack commanders that can do it for me, then welp, I will make my own fun.

The lack of time and energy continues. Fortunately, there is a leftover bonus screenshot. An Endless Nuhoch Crusher tonic popped from home instance harvesting.