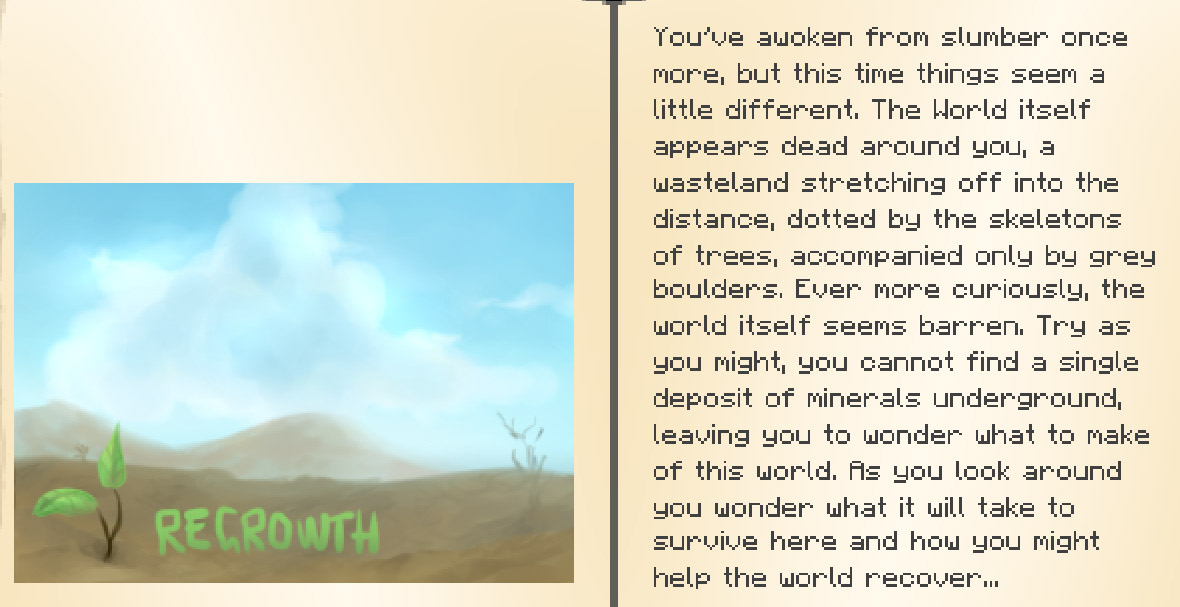 Minecraft: Regrowth is a modpack with an interesting premise. You awaken in a wasteland of nothing, dead trees, dead rock, dead everything. 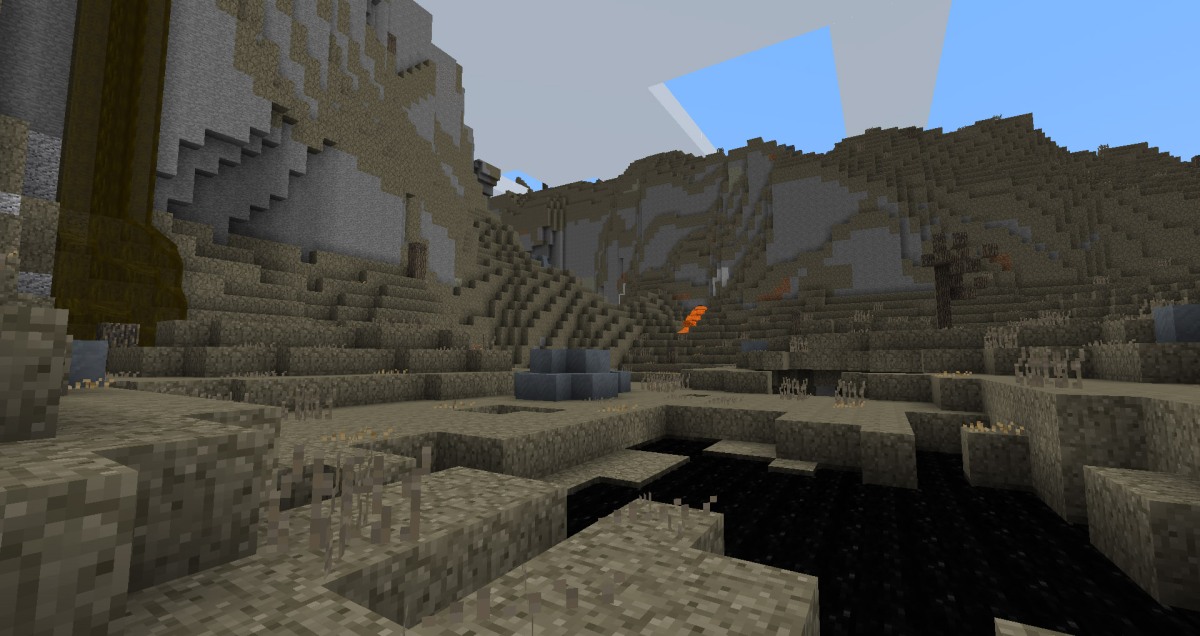 If you’re lucky, you find a pool of oil near your front doorstep / spawn point.

From this auspicious beginning, your task (if you choose to accept it) is to bring life back into the world.

That mini-forest and grass patch is entirely man-made.

It’s a modpack that doesn’t believe in hardcore pwning you the minute you walk out your front door (which is a very strong point in its favor after trying out mods like Crash Landing or Void World, where I tend to lose patience with urban city fighting fending off an army of crazily modded zombies and skeletons, never-ending thanks to strategically placed and nearly impossible to find spawners)…

…but cleaves to a philosophy of removing the (often easier) standard “go-to” tech mods like Minefactory Reloaded, Thermal Expansion, Extra Utilities etc. in favor of walking you through less explored mods of a nature and magic flavor, such as Botania, Agricraft, Magic Crops and Witchery.

A few tech mods are still present, but mostly of the less explored, slightly more tedious/grindy variety, Buildcraft, Railcraft, and Mariculture being some of those you’ll be asked to learn and progress through before reaching the ability to comfortably make a Tinker’s Smeltery.

It’s quite a well done progression, helped along by a very comprehensive HQM quest book that walks you step-wise through unfamliar mods and always provides multiple goals to be working toward at any one point.

The overall feeling is that of a relaxing, growing/farming progression, that gives you sufficient time and space to build however you wish.

In my case, that’s still pretty much a functional home of the ‘hole in the ground’ variety.

I find it quite impossible to break the habit somehow. I vaguely considered flattening out a huge open space on which to grow squares and lines of crops out in the world, but my spawn point happened to be in the Arid Mountains biome and the landscape was just too daunting to consider massive terraforming.

Besides, a gigantic walled compound was so… ugly.

(I ended up digging a 3 deep moat around the outside of my base to demarcate a relative safe area with torches to prevent monster spawns. This has the advantage of being almost invisible to the eye, if you’re not looking directly at it.)

While the experimental industry is left outside, most of the really valuable stuff happens inside:

A week later, it’s significantly more upgraded, and starting to reach the limits of its confines. 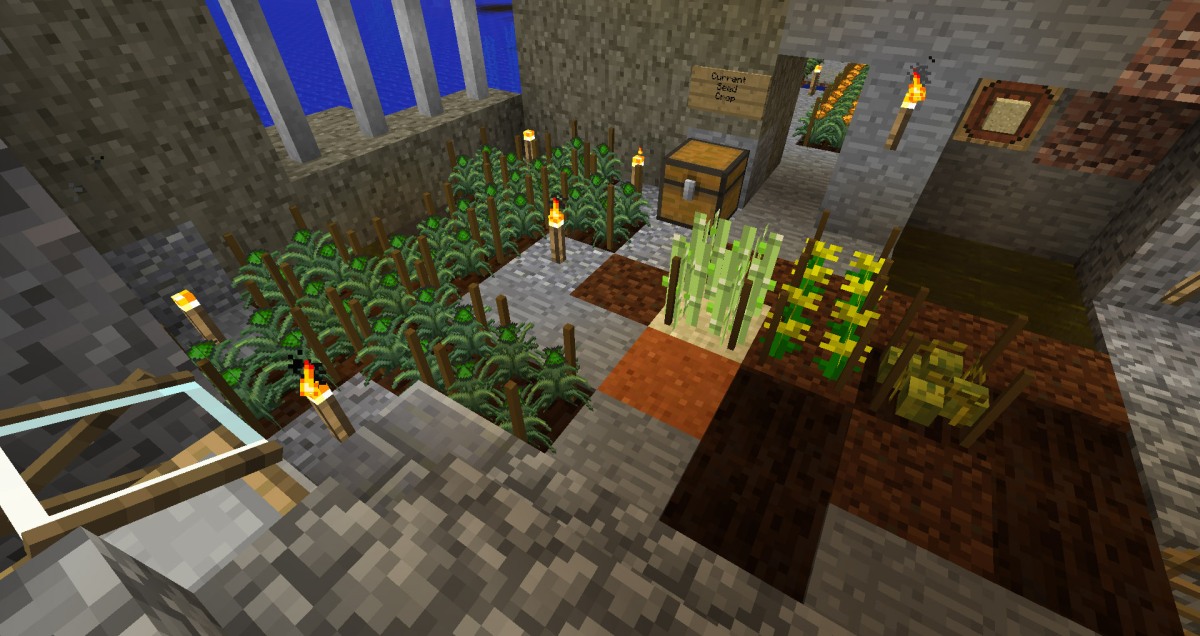 I was perhaps a little foolishly optimistic in thinking this tiny chamber would be sufficient. It’s now been more or less converted into the initial crossbreeding zone – one produces new crops/seeds by crossing two existing crops such as those dandelions produced by crossing sugarcane and melons (don’t ask.)

It turns out that seeds can increase in strength and growing speed and yield, and the easiest fire and forget method of propagation (since weeds are disabled in Regrowth and you don’t have to hover anxiously over the crops ready to smite them) is to stretch them out in a long line.

By the time the seeds propagate themselves to the end of the line, that last seed is often at the ideal 10/10/10 stats, or close to it (whereupon you start the line again.)

My second growth room was stymied by my poor architectural planning. I couldn’t widen it any further because there are mushroom corridors along the right wall that don’t appreciate any light being let in, and on the left, those windows pretty much overlook the sea. 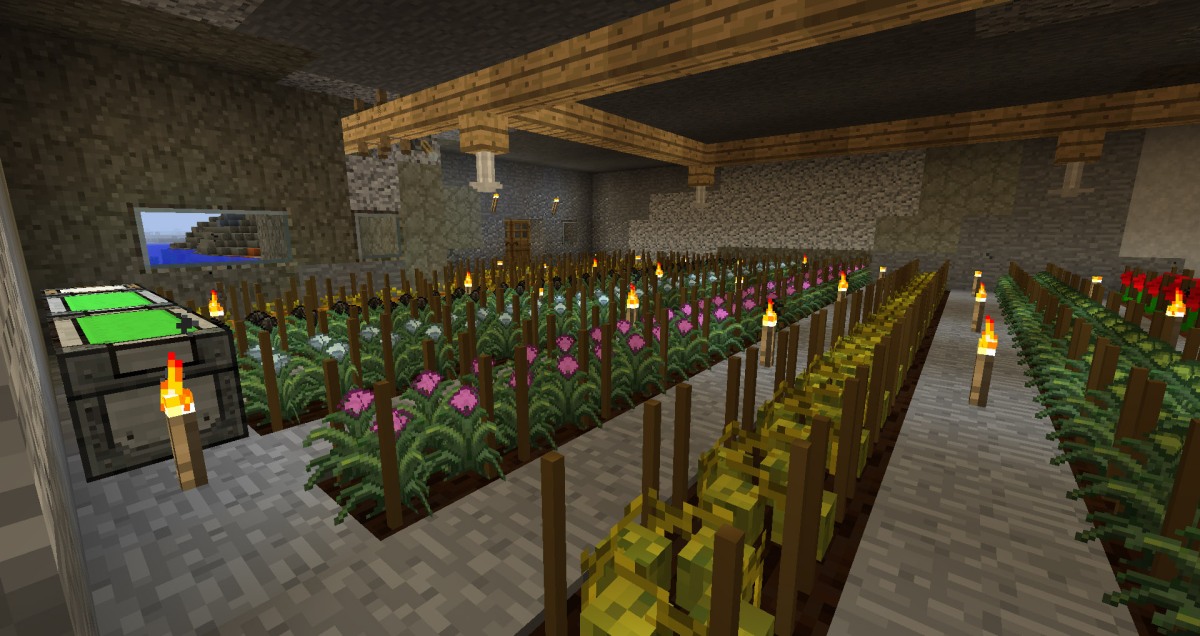 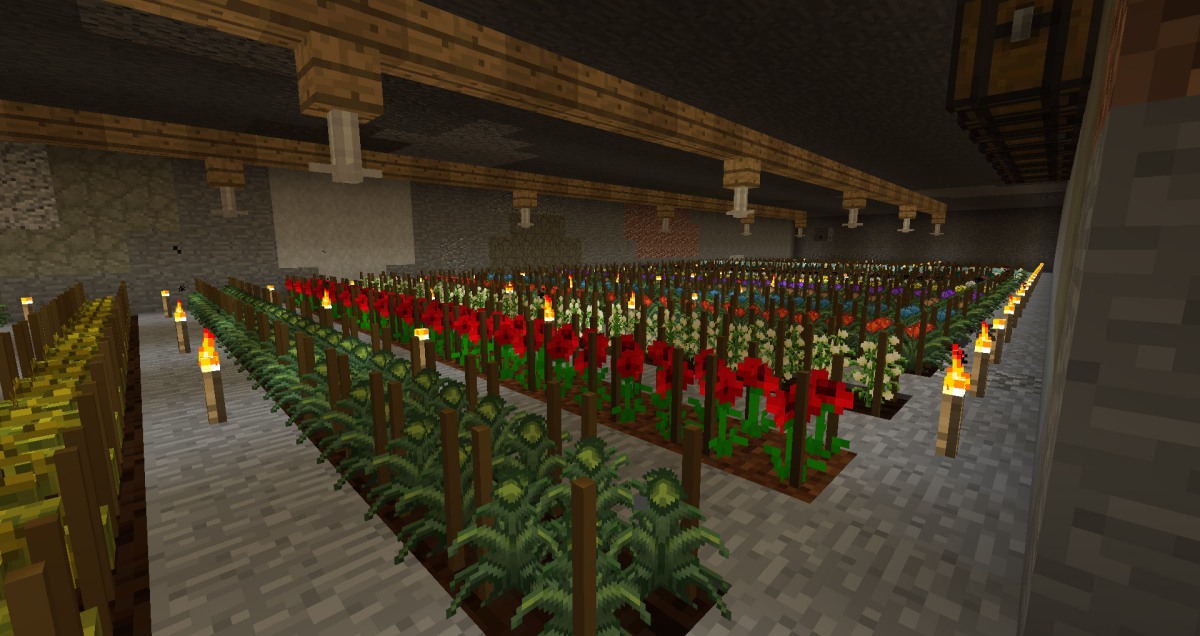 The sprinkler system is newly installed. One is still working out the kinks. Several water tanks are connected to it outside but it’s been proving really hard to create an infinite water supply in Regrowth without my standard easy way out of an aqueous accumulator.

I think my only hope at this point is to use a Buildcraft pump (which requires me growing redstone) and a 3×3 infinite water source.

It will also involve some wrangling with Buildcraft pipes, which I honestly quite loathe after getting used to the more flexible and intuitive Itemducts and Fluiducts from Thermal Expansion via Agrarian Skies or the conduits of Ender IO via Wanderlust Reloaded.

Buildcraft pipes feel like a massive programming throwback to something decades earlier where you have to specify -everything-, starting from the extraction wooden pipe (that apparently has to be powered by a separate engine, which in turn has to be powered by a redstone lever – unless I’m misunderstanding something) and then the actual transport itself requires differently colored pipes made out of different materials specifying the speed at which it travels and then god forbid you want to do something complicated while stuff is in the pipes because that requires more pipe colors to sort/divide/filter and so on.

Well, we’ll see. Regrowth leaves me with no choice but to learn how to manage it (or forcibly custom install another mod, but that feels like cheating) so manage it we shall, for the time being.

It’s like how I’ve started wrangling with Railcraft’s Steam Boilers and really primitive-feeling steam engines (which I hear can explode if you treat them badly, like pour water into an empty overheated steam boiler) because I don’t have anything more modern on hand and I need -some- amount of RF power.

The beginning of the experimental ‘machines’ phase. I decided to do a more Agrarian Skies-like floating cobblestone platform to house the machine experiments.

I figure if things really go badly and explode, everything will just fall into the ocean and I can do recovery from there.

No doubt I will have to widen it further as time goes by, but at least there’s potential for a nearly infinite flat space in this direction.

Definitely a modpack worth trying.

Just don’t say I didn’t warn you if you go silent for several weeks and no one hears from you in a while. *coughs*