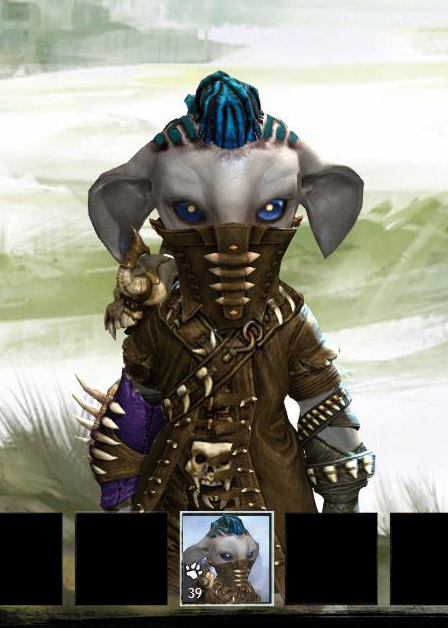 I need another one of those quick posts again, because I’m seriously starved on time lately.

I think Paeroka is on to something, showing off all her MMO mini-mes…

Pronounced “Cudgel,” as he will tell you sourly, if he deigns to tell you at all.

He shares the typical asura trait of assuming all bookahs fairly stupid and not worth conversing with, plus a little extra helping of bitterness for being teased mercilessly through progeny-hood for his un-asura-like name.

(No double-vowels, not even a double-consonant, not the usual short sharp exhalation of a one syllable male name, but a double syllable one slightly more typical of female asura names… the only thing vaguely respectably masculine is ending in a consonant… and the sexy ears, of course.)

Personally, I sometimes slip fondly into something more vaguely resembling “Cujo” or “Cujill” when I’m thinking of bringing him out for an sPvP spin, but it’s ok, we’ll whisper it and he already thinks we’re all a bunch of bookahs anyway.

He’s been level 39 for a very long time, having officially replaced my necromancer as my sPvP ol’ reliable some time back.

And he’s one of the rarer combinations of race and class – something I love my characters to be, so that they’re a little bit atypical and I can infuse a little more backstory into them.

Why asura ranger? Well, mostly because I thought the idea of a pet being as big or bigger than his ranger master would be hilariously awesome to play.

In my head though, Kujl is an extremely antisocial (probably even asocial) asura who doesn’t even want to mix with his own kind, due to said horrible childhood teasing making lab and school life a living hell.

Since nature and the outdoors are where most normal and ambitious asura only venture to when their labs suffer an unfortunate accid- “learning experience” and require some ventilation time… or when they need test subjects… Kujl has probably discovered or decided that this giant free-from-rent-and-research-grant-requiring-(aka-political-schmoozing-needed) venue is where -he- will set up lab instead.

Being also a typical “I’ll show them… I’m a genius” asura, Kujl is busy pioneering work in “living” golems.

Yep, his pets are implanted with all manner of technomagical control devices for “guaranteed reliability” (fine print: beta version, some testing still required.)

It’s a curious thing, but I’ve always thought of Kujl as being fairly young, and his levels tend to match, I haven’t moved him beyond level 39, and not really sure I want to, even if I do want a level 80 ranger at -some- point.

Yet, he has a very old, serious, bitter soul.

He was one of the earliest characters I made, probably in one of the original five slots.

I found a portrait of him at level 9, some time in Dec 2012, and I suspect he was made earlier than that.

At the time, I knew he was young, I tried to color him flamboyantly, yellow and purple “rich” colors, mostly because I was sick of dyeing all my alts some version of ebony, grey or brown for natural metal/leather colors.

It just didn’t quite click. He was kind of saying, this is not who I am.

I suppose we can assume he was still schooling at this point, dressing up in a more civilian style, if only to blend in, but just not comfortable with city life. 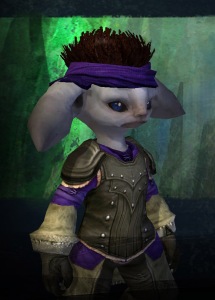 Around 2013, I start attempting to level the ranger alt again, and give him a bit more of a makeover. He still has the purple intensity, that reflects the deep blue intenseness of his eyes. The yellow has been dialed back to something more cream-leathery, and more natural dark leather armor is protecting him on his ventures afar.

He stalls somewhere around lvl 20ish.

When I next revisit him, probably at least a year later, I have a free makeover kit lying around, and I decide to check out the exclusive asura hairstyles.

I have no idea how to describe it. A mohawk? A ponytail? Something vaguely Aztec-inspired? But somehow, I know it fits. He’s grown up.

He doesn’t need that kid hairstyle with the purple hairband anymore.

He’s moved from kid to teenager to young adult, at least.

I take him PvPing. I’m relying on his totally nondescript lowbie leather armor to signal that I’m a nobody, not at all prestigious, I can be overlooked, I probably suck, maybe we’re small and sneaky, but that’s about it for the fear factor…

… We do suck. For quite a while, as I throw myself gleefully into build-testing the hard way, under fire.

But slowly, surely, one experimental tweak after another, as I and he grow more comfortable with his weapons and what he is capable of, I start winning matches. Not a whole lot, but enough to tilt me back to a 50% win/loss kind of ratio.

Several months later, GW2 opens its very first sneak peek of Heart of Thorns, and somehow in the closing of that, something funky happens to the old pre-launch early start accounts and Anet says that our particular version of game doesn’t quite exist anymore. They’ve given us the heroic edition of the game instead, and the heroic edition comes with an extra bonus GW1 heritage/legacy armor skin from the gem store… Take your pick, heavy, medium or light?

The medium Krytan armor looks to my eye like the best of the lot, and it really reminds me of my GW1 ranger, who spent quite a while wearing a style like that.

But do I even -have- a medium armor class who can wear it?

Some months after that, I was on my scientific skins collection kick.

When it was done, I was struggling to figure out who else could use green skins besides my necro (who already sports Tequatl sunless styles and a rare dreamthistle skin or two.)

And then I knew who it was absolutely perfect for.

Scientific and steampunky, as in asura-like technology?

Green and acidy, as in condi damage? 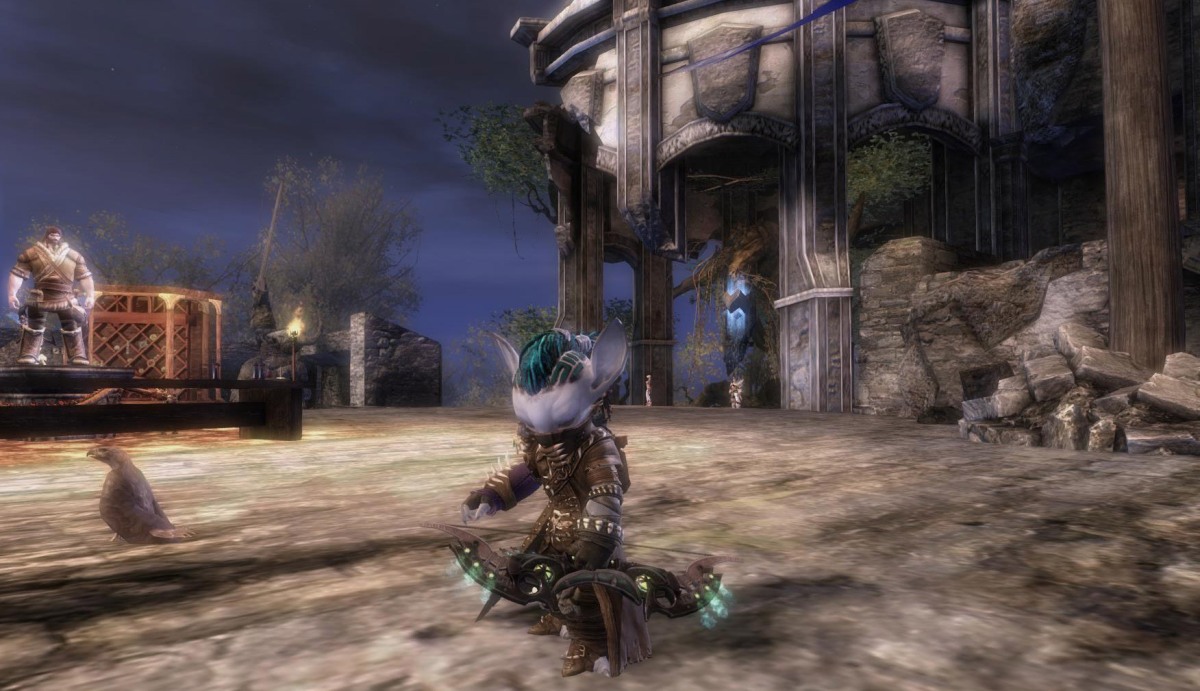 Thank you, Kujl. Take a bow.

(Just don’t take over the world while I’m not looking.)

This post was brought to you by the letters B for Belghast and Blaugust, and the number 20.