The group at Cobalt killed the phase 2 wurm head in, if not a record-breaking time, still a very good and respectable time.

Once Amber had killed theirs, it was the usual. Grab champion bag from the dead wurm, collect Golden Chest from the sidebar, take portal to big chest and get a whole lot of not very much scrolling down the side of the screen…

…is that something pink I see in my bags? Did I maybe get an Ascended chest (that will soon be able to switch stats to something useful) to sweeten the day?

*flips to the chat channel I’ve set for game messages*

Oh wait, it IS the last regurgitated armor chest (of three) that finishes my skin collection!

Feeling suddenly very celebratory and cheerful, I start the process of tidying up my inventory, which means breaking open the big golden chest to reveal more blue and greens and salvaging those, and then opening up the 5 champion bags that came out of the chest and getting even more blues and greens (plus crafting odds and ends) and salvaging -those-…

… Then I do a double take at the exotic that dropped out of the last champion bag. 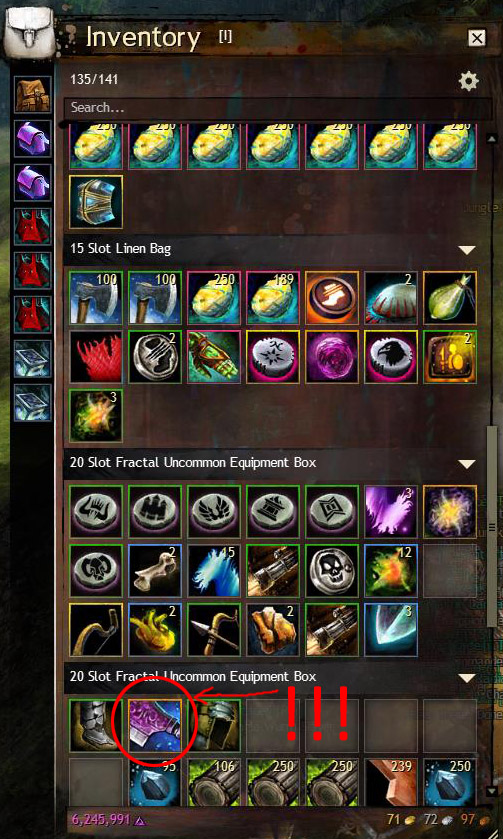 That, for those who don’t recognize the skin, is Lord Taeres’s Shadow.

Something I’ve been oohing and aahing over for a long time and had my eye on, but hesitated to get at 60g on the TP. (It’s now worth 80g on the TP.)

You have no idea how hard it is to decide whether to sell it or keep it – selling would give me enough gold to buy a Scientific skin (my new ‘chase’ goal in GW2, aka collect as many Scientific skins as possible) and keeping, well, saves me 80g and gives my future mesmer the most stunningly stylish sword one could ever ask for.

Being the hoarder that I am, I’ll probably go with the latter. Gold can be earned by other means, after all. 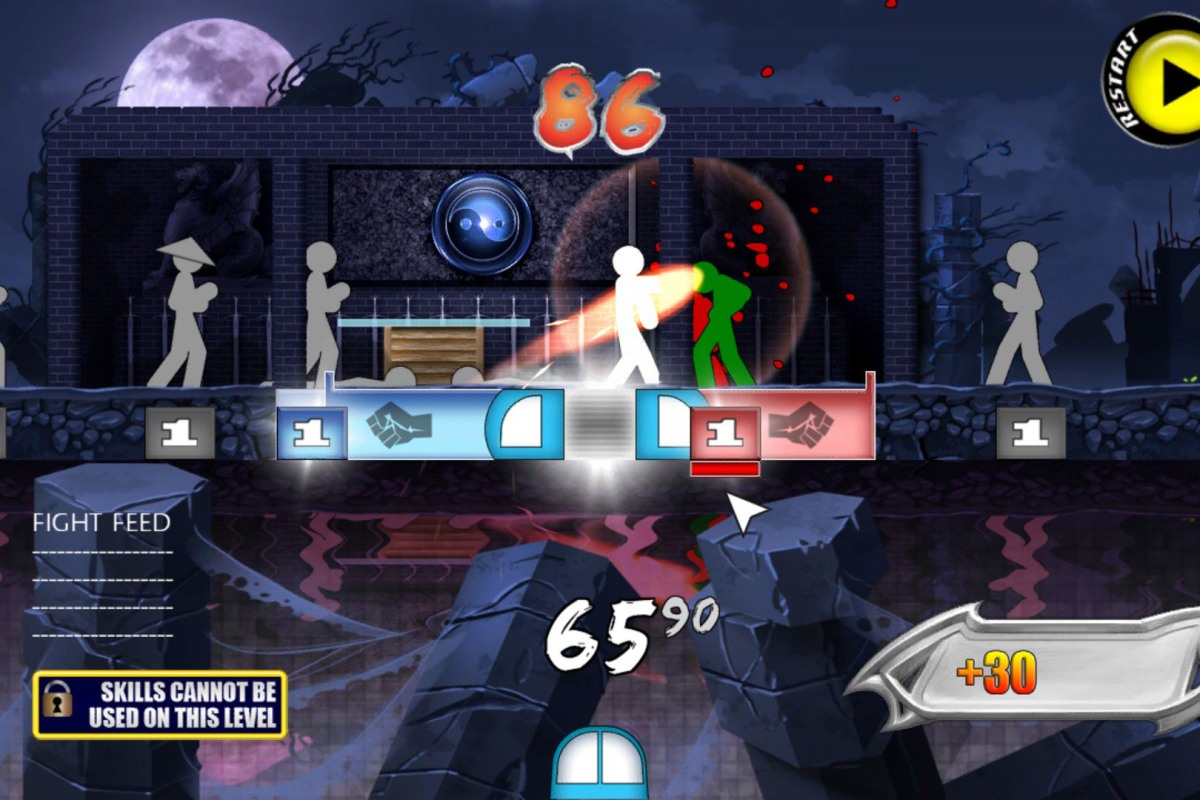 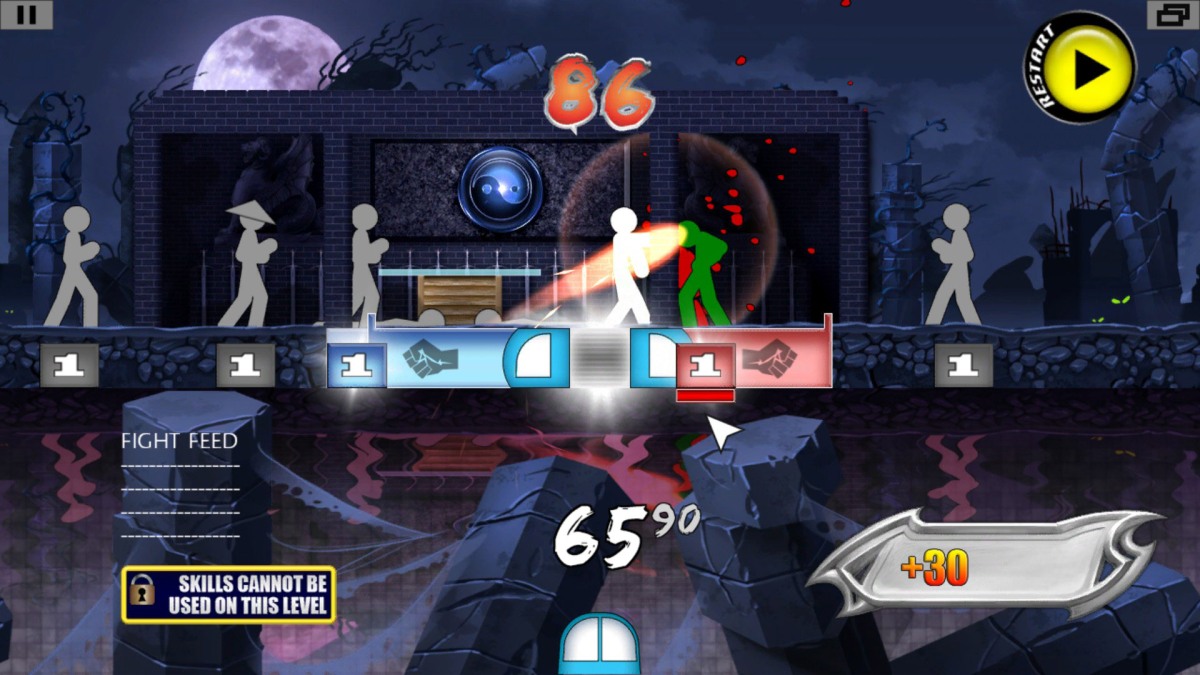 This game is nuts. A good kind of nuts. Crunchy. Flavorful. Nuts.

The stick figure graphics look absolutely cheesy, in a low budget mobile app kind of way, but hiding behind that is a gem on the level of Cook, Serve, Delicious or better.

You press two buttons. That’s it.

Left and right mouse buttons. Or if you’re a keyboard warrior, you get the options of left/right arrow, S/D or B/N.

Everything else is in the timing, plus the combos and skills that change up the timing.

This game distills that mechanic into its utmost purest form. (A one-button clicker would lack the confusion of one’s fingers trying to decide which button to press now.)

I suppose you might call it a rhythm game meets a fighting game side brawler or something, but whatever you call it, it’s definitely worth a play.

It will teach things like anticipation, watching the enemy’s coming attacks, planning of your next few moves and improve one’s reaction time.

Skills that can be applied to any other action-combat game you’re playing, like say, *cough*, GW2. (I weep inside every time I see a player get knocked down by a champion wurm’s tossed rock. It’s one of the easiest things to practice dodging on. The player just has to make the mental connection that dodging it -is- actually possible.)

It will punish button mashing with tit-for-tat ruthlessness.

And still it will feel completely fair, because it will only attack you when you slip up and make that mistake. Press one button that failed to connect and missed, and an enemy will hit you in response. Fail to dispose of an enemy, and it again will hit you.

Get the timing and anticipation perfect, and you are rewarded with sequences of absolute martial arts combo perfection as you slip into a flow state and your corresponding stick figure glides like water and smashes the crap out of his enemy stick figures.

Each level lasts a fairly short time, so it’s great for those quickie entertainment moments when one can’t afford to fire up a longer game (or say, when one is waiting for 15-30 minutes IN a longer game waiting for something to start.)

And yet, there are a TON of levels with a bunch of variations to choose from (the above pic is like one small part of the whole continent map – the graphics look like shit, yes, but thankfully you don’t have to stay in this level select screen long) plus survival mode plus god-knows-what difficulty modes, so there’s plenty of game in this game.

Ultimately, you wanna pick up One Finger Death Punch for the fantastic demonstration of how merely pressing two buttons can add up into an entertaining game, and for the cartoon stick figure carnage amidst punchy sound effects that work really well.