Remarkably unfocused in gaming this weekend.

Just feeling ridiculously restless and went roaming through various games like my old game-hopping self, barely lasting 15 minutes on a single title, searching aimlessly for something… except I hadn’t a clue what the something was, and never found it either.

Bounced into GW2 for an hour of WvW reset, then got bored. Batman: Arkham Origins wasn’t cutting it. Idly thought about playing Fallout: New Vegas on the heels of the big Fallout 4 trailer news, then decided I wasn’t quite up for a long haul RPG just yet. Dipped into Dota 2 for a game, then stopped. Vaguely considered starting up How to Survive, after seeing on Steam they had a new immersive camera view mode or something, but couldn’t remember why I stopped playing it and decided not to start again yet either. Thought I was maybe missing some survival gameplay, so I loaded up Don’t Starve and picked 30 grasses and twigs before giving that up as a bad idea too.

Ended up on the sofa flipping TV channels and also coming up with nothing, except… there were a whole bunch of smart TV functions I hadn’t really explored, so what the heck… *experimentally presses a bunch of buttons*

Long story short, I ended up figuring out how to watch Youtube videos on the TV, a process I attempted once and gave up as a bad idea due to utter infuriation trying to type letters into a search box on a TV remote and discovering the TV did not support USB or Bluetooth keyboards either.

Turns out what I needed to do was make an entire new Google/Youtube account and use an iPad or computer to create a whole bunch of subscriptions and custom playlists. Linking -that- to the TV allowed me to channel flip between non-awful actually-interesting-to-me Youtube content using merely the arrow keys and OK button on the remote, which is about the extent of what you’d want to do with such a lame controller.

It was a surprise to me that I had infinitely more patience for sitting through giant-size videos while on a couch, occupying my idle hands with other productive household chores I’d been procrastinating over, than say, sitting in front of a monitor and keyboard and mouse (which implies active GAME time, rather than passive VIDEO watching) or squinting at tiny moving pixels on a mobile device.

Watched some Dota 2 qualifiers and Evolve tournaments, a couple of tutorials, and even managed to sit through a couple of the recent GW2 Points of Interest / Ready Up videos for long enough to see the Reaper and Dragonhunter combat animations (though I rather gave up at a traits tree discussion covering individual traits… whose numbers are absolutely not set in stone, as repeatedly stressed, and whose functions are probably still in flux. Eh, I’ll look at them when I see ’em, in the expansion or in a beta that is nearer to expansion launch, really no point analyzing anything now when it could change from patch to patch, right?)

I ended up listening to Totalbiscuit expound on MOBA mindshare, during a news coverage over Infinite Crisis’ shutdown. (Apparently, it was a DC heroes MOBA, created by Turbine. Who knew?)

His issue with it was that it was mostly a clone that failed to innovate, and thus failed to take any sizeable audience from the big three MOBAs, whom he listed as LOL, DOTA 2 and Smite (albeit much smaller audience than the first two, he said), with a maybe caveat for the up-and-coming Heroes of the Storm.

Smite, huh? I’d played Strife (which Izlain loves to call baby’s first MOBA) for the span of a tutorial or two, but I hadn’t actually looked at Smite.

According to TB, Smite at least attempted to innovate by changing the camera view from the traditional RTS isometric view to a 3rd person one.

So I flipped Youtube channels to go look up a Smite tournament, and after a very similar-looking draft pick of heroes, I found myself looking at a typical MOBA game from a hero’s eye view. Literally.

The similarity to typical MMO combat was striking, and I started to ask myself about their control scheme. Are the players actually using WASD and mouselook like an MMO?

Curiosity got the better of me and despite my desire to not confuse myself playing multiple MOBAs with a ton of hero names while valiantly trying to learn the 110 heroes of Dota 2, I ended up downloading the Smite client to just try the damn thing out. Totally non seriously, of course. 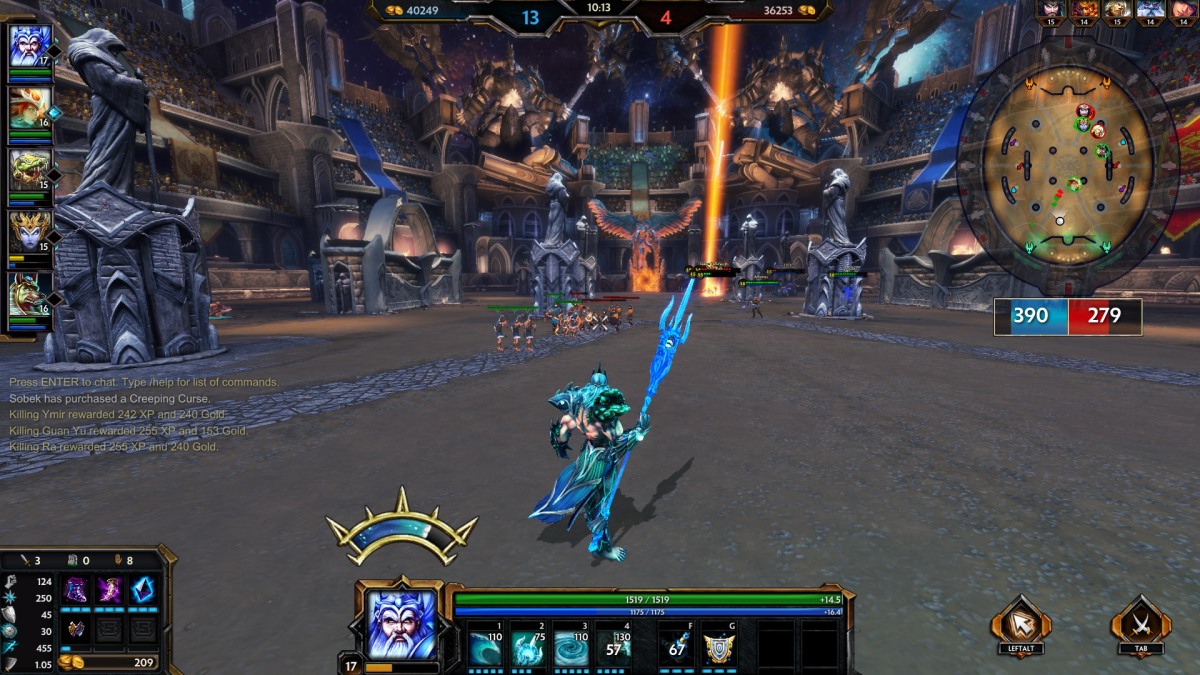 It was rather… refreshing, really.

It’s not got as much eye candy as either Dota 2 or LOL, and is distinctly less polished and rougher around the edges (I got thrown into a confusing sequence of tutorials with nary so much as a by-your-leave.)

Apparently, hero balance is more questionable and the competitive conquest (aka most pure MOBA-alike) mode is host to a highly toxic community (which makes it no different than any other MOBA), but…

… for super-casual play, I found it modestly amusing, and dare I say it, fun.

First off, I felt a LOT more at home with the control scheme. It was indeed WASD and mouselook, except that looking up and down was verboten. I was impressed to find that the default A and D was strafe left and right, which made it unnecessary to have to tweak any settings.

Skills had little shaped targeting reticules in lines and cones and circles, distinctly reminiscent of Wildstar or GW2, except that one tended to position them with mouselook, rather than a mouse cursor per se.

Every attack, yes, even the traditional “auto-attack” has to be powered by clicking or holding down the left mouse button, which lent it a distinctly action-combat feel.

I was intrigued with the idea of ranged standard attacks being -all- skillshots, in that each projectile has to be targeted like an FPS, which is an interesting way to twist the standard melee and ranged combat roles where melee traditionally have a tougher time and range just sits back in safety autoattacking. Ranged characters thus end up with a slightly different set of problems to solve in Smite, having to lead targets and aim properly and choose positioning appropriately, while melee still have the traditional “gotta catch up with a moving target” issue.

Secondly, Smite provided a number of distinctly more casual game modes. Besides the traditional Conquest mode, it came up with a more short form brawler-y Arena mode, where the goal is ostensibly to send a bunch of minions into the opposing team’s portal to reduce their point score, but mostly it’s a great excuse for running into the center and duking it out with all the other heroes, while half keeping an eye on the progress of your minions. Matches last 15-20 minutes, a good half the time of a typical MOBA map.

(It has a couple other variants, a 3 vs 3 Joust and so on, but I mostly just played the one so far. Rumor has it that Arena mode is the most popular, and I can understand why. It simply offers the short format jump-in-jump-out lots-of-combat option. It’s like how combat mode became more popular in Natural Selection than the longer form strategic mode.)

I have zero comments on its community, because I ended up playing with bots 97% of the time. I played a practice match or two, which auto-filled itself with bots. Then I queued up for a co-op match, thinking that might be the safest casual option and wanted to see if that would still earn me ‘level progression’ to give that fake feeling of progress and allow the purchase of new heroes, and was mildly amused to discover that if you were kept waiting for maybe 2 minutes or so with no one else available to play, the game just filled with bots and let you play.

The bots were the decidedly brain dead variety, that didn’t stand a chance. But as I pewpewed and enjoyed the explosions, I found myself reflecting on the whole “PvE”-alike aspect. Mobs in MMO (or all) PvE generally are programmed to let you have the win. It kind of felt the same here.

But what’s the harm, really?

PvP purists tend to look down upon this. Psh, they go, humans are the most dangerous game. We like to hunt people because of the potential unpredictability, the cunning, the intelligence and smarts of a thinking opponent (never mind that in most pug matches out there, your teammates appear to have no greater IQ than that of an earthworm. They keep searching for that dream of a perfectly even match where herculean struggle lets them win in the end, or enjoy their pub stomps over weaker opponents – how’s this part different than the standard PvE ego boost? – and then gnash their teeth when stomped in return by someone better.)

But you know, not everyone wants their every game to turn into a terrific life and death, Dark Souls-esque struggle for success. (Speaking of Dark Souls, there’s proof that you can crank up PvE difficulty to hardcore levels too, even without bringing another human into the picture.)

Sometimes, they’re just a casual who wants a bit of escapism and fake ego boost and shiny pewpew explosions.

Playing at that level, the most casual portion of Smite felt surprisingly satisfying as something to pass the time with.

What I also found pretty slick was an automatic item buy and skill buy system that handled the deeper stuff, letting you get to the meat of blowing shit up with skills. I liked it because it suggested there was a deeper level that one could eventually progress to, if so inclined, choosing item and skill builds appropriately, but it also sorta said “for now, when you’re a beginner, don’t worry your head over it and just play and enjoy.”

If I wasn’t already so busy with Dota 2 (and I’m a purist who is supremely loyal to the original format and concept, so it’s hard to tear me away, even if trying to learn the damn game is like trying to read the Library of Congress in a lifetime,) I could see myself gravitating towards Smite as a sort of action combat MMO – MOBA bridge.

Some day, I suppose I need to get around to trying out Heroes of the Storm too, but that, ugh, no doubt requires a Battlenet account and all that other Blizzard jazz that I’ve been evading for a long time now.

I’ll probably wait until all Starcraft 2 episodes are out, since I want a cheap trilogy pack -someday-. That would probably make it unavoidable then, and I’ll get around to trying out HoTS and Hearthstone and Overwatch like their evil master plan desires.