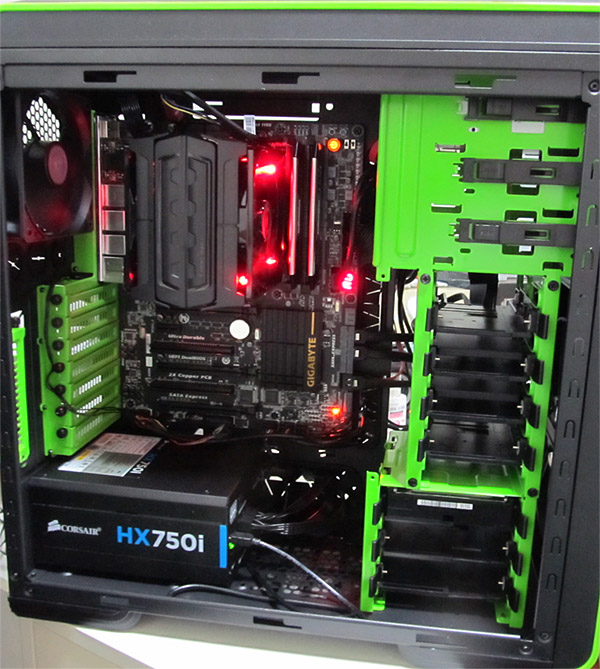 Here’s a gratuitous shot of the new PC… sans one rather important item.

The first test run of power flowing through the system went well, which was good, since I’d been building it very leisurely and piecemeal an hour a day or so, in between gaming sessions, in no real hurry since I don’t have my graphics card anyway.

Last I heard, it was in Hong Kong somewhere. (Sheesh. Oh well, it gives me a lot of time to transition over slowly. I’m still trying to figure out the best arrangement of new PC and old PC on and around the desk, which is also overflowing with monitors, speakers and other computer paraphernalia.)

Anyway, when powered on, all the LEDs lit up in a really cool fashion. I knew there were four red LEDs on the after-market CPU cooler, but I didn’t know that the motherboard also had red indicators, which was a neat bonus.

I didn’t smell smoke. Good sign, that. The fans were spinning (but oh so very silently, it was amazing!) and there were words on the monitor I’d hooked up.

Admittedly, the words were something obtuse like “Boot sector disk not detected. Please press a key to boot from DVD, CD or other optical device” or something along those lines. Which, of course, wouldn’t work anyway since there was no boot disc in the Blu-Ray drive to begin with.

But hey, no crashes, no black or blue screens of death, so far so good. Power button seemed to be working.

Slotted in the Windows 7 disc, powered it back up again (yes, the reset button works!) and the OS installed effortlessly. A lot more cleanly and faster than my previous go at it upgrading from Win XP to Win 7.

Some of the speed, no doubt, has to be credited to the SSD.

I wanted to check the BIOS after Windows installed successfully, and I had to reset it three times to do so.

The first time, I’d barely read the BIOS message telling me what keys to press for what option, before the system jumped straight into loading Windows. And boy, did the desktop come up fast. In seconds. It doesn’t match an iPad, but it was coming pretty close. I guess I really have been living in the past with a Windows startup that takes minutes.

The second time, I tried to press the Del key to bring up the BIOS, because I -thought- that was the key that the superquick message that flashed by said to use. And I apparently didn’t press it fast enough, because it was zipping directly to Windows 7 desktop again. Hello, stock Win 7 blue/green background thingy. I really wanted the BIOS, though.

On the third try, I spammed the Del key multiple times and voila, success! Took me into the UEFI BIOS, which uses a much slicker graphical interface than I’m used to seeing. T’was pretty cool scanning all the options.

Resting/idle CPU temperature was 27-28 degrees Celsius, about 3-4 degrees higher than room temperature (yes, I baby my computers with air conditioning, a tropical climate is harsh otherwise.) So far so good on that too. Hopefully that means I didn’t screw up processor or CPU fan/cooler installation or the thermal paste application in an obvious fashion.

Stress testing with a this-generation game will, unfortunately, have to wait until my graphics card gets off the slow boat… from Hong Kong. (It’s only, what, 8 hours passenger flight time? Guesses whether it actually arrives in 8 days… or 8 weeks.)

I did grab the Eidos Anthology bundle from Steam in preparation though – Deus Ex Human Revolution, Hitman: Absolution, Tomb Raider, Thief, the works. Lots of stuff that I’d been putting off and letting it depreciate over the months and years, knowing that my toaster wasn’t going to handle these FPS type games well.

And by the time I’m done with all of this, Civ: Beyond Earth will hopefully be 50% off or more on the -next- Summer Steam sale. *wry grin*

In the meantime, here, have more gratuitous pictures: 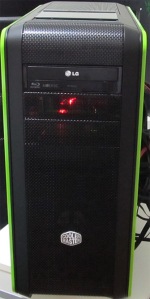 Front of the case has a very clean look, with metal mesh allowing airflow.

The top slides back to reveal a small cubbyhole for placing objects in, and USB ports and the power/reset switches.

I’d previously had the impression that this was hinged. It’s not, which is a little bit of a letdown, and leaves me in a mild dilemma over “leave it fully open for convenience, but block top air flow” or “get in the habit of closing it regularly and sliding it back when one needs access to the ports” or something in between.

Still, it does slide fairly cleanly, so it’s not exactly a struggle to open and close it. (It’s just that I fear I’d break it one day overdoing opening and closing.)

Popping the front panel off, there’s a removable dust filter behind the metal mesh!

I find this rather nifty, since in comparison, my old Cooler Master Centurion case only had some pieces of soft foam as a dust filter. (And the vacuum cleaner ate one when I was a little slow one day and forgot to hold the small pieces of foam down.)

Removable dust filter on the bottom as well!

And yes, those are rubberized feet.

There’s ventilation pretty much everywhere on this case – the bottom, the top, the front, the back, only the sides have no air holes.

If you wanted a side fan, I guess you’d have to get the standard non-windowed version, which does appear to have air holes and room to screw a side fan onto.

But really now, I think we’re pretty much overcompensating for something with the front fan already. 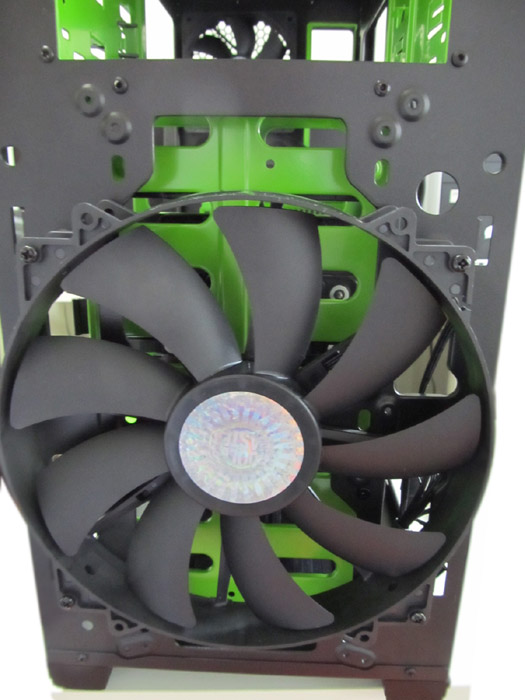 Really, pictures cannot do it justice.

Nor can the specs. I’d read 200mm fan and sort of nodded my way past it. I’d read the reviews, and said, ok, it’s a pretty big fan, that sounds very nifty indeed.

You really have to see this thing in person as you pop the front panel off and go, “Oh my god, they put a jet engine propeller on the case!”

What’s super impressive about this is that you’d expect it to sound like a leaf blower or something, but it’s been utterly silent under low non-stressful conditions so far. It’s more quiet than my old computer, which has a faint but audible hum that I’ve gotten used to.

The engineering and design of these cases never fail to impress me over the years.

Seven to eight years ago, the whole concept of tool-free compartments to hold hard disks and optical drives with some fancy schmancy designed plastic in place of metal screws was already quite spectacular, to say nothing of the hand-screwable two screws that hold in place the side window.

With this new Cooler Master CM690 III case, those similar innovations are there, just made better with iteration over time. Both sides are removable, one with a window, while the other side has an indentation outward to make more room for wire and cable management behind the motherboard.

Here’s the slightly more cable-managed version that I took some time to putter around with, after establishing that it could actually turn on and run. (Aka, I didn’t screw up any wires connecting to the wrong places.)

The amount of hard disk storage slots is quite stunning, and I’m really amused by the latest newfangled innovation in tool-free removable hard disk trays. 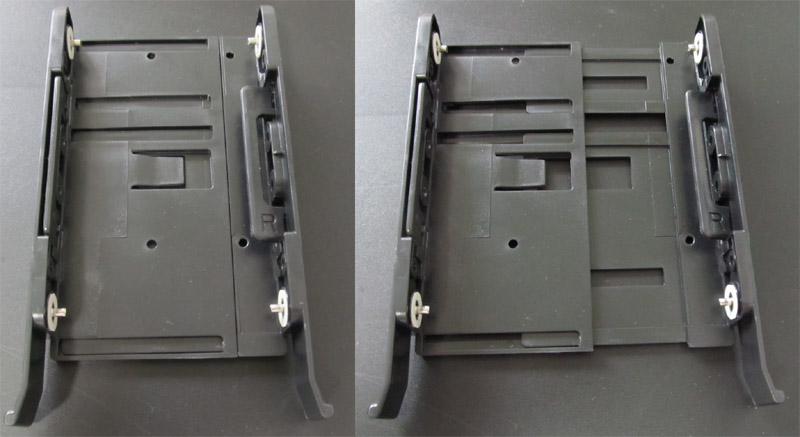 These things are pretty durned cool.

They slide all the way closed and become just wide enough for a 2.5″ disk.

SSDs get a little propping up via some fold-down plastic ‘shelves’ – the one on the right side of both pictures is folded down.

Or you can pull them open and resize them to fit a 3.5″ HDD perfectly too, with little metal rods that fit into the screw holes, and white rubber rings to reduce vibration around those rods.

One identical design, making it easy for a factory to mass produce tons of these, and then bang, they all go into any case Cooler Master wants.

You can actually widen the top cage to fit 3.5″ hard disks if you wanted, and you can also screw in 2.5″ SSDs in the 3.5″ configuration using the bottom screw holes provided.

It makes the thought of adding or changing storage space so easy that it almost feels wasteful for me to only occupy 3 slots. Guess there’s upgrading potential there.

That’s the far future though.

I’ll be happy with the near future, once the gaping hole in the middle of the space is filled up with you-know-what.