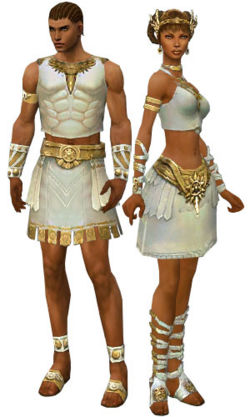 Ah, the power of nostalgia.

Way back in Guild Wars 1 history, when the Hall of Monuments came out and I finally resolved to make a proper semi-optimized go at it, it became quite obvious that my initial ranger/monk super-casual dabbling main was going to have a hard time struggling through much of Eye of the North (to say nothing of hard mode attempts at the main chapter stories.)

The class I settled on for my new main – which was going to have to go through ALL the chapters AGAIN, before progress with the Hall of Monuments could be attempted – was the much talked-about imbagon.

Well, okay, paragon, but I was planning on dragging a bunch of stupid NPC heroes through a lengthy gauntlet of HoM tasks and between the choice of tanking for them on a warrior or some such and party wiping if things went wrong, or making the whole damn party tanks instead by basically rolling one’s face on the number keys… that was a pretty big argument in favor of a simple, spammy, idiot-proof playstyle.

Problem is, I really -hated- the characteristic silhouette of the Paragon.

The whole guardian angel thing was already fairly sappy, there was this entire love affair with the color white, and all Paragon armor basically looked like a cross between a kilt and a toga.

Not kidding you, go look at the paragon armor gallery if you want.

The Paragon weapon being a spear didn’t exactly help.

Now you looked like a javelin-thrower at the ancient Olympics.

Picking up the Rainment of the Lich for 10 bucks in Guild Wars 1 was the best not-quite-microtransaction I ever spent.

As for that particular shade of dye, I’m not quite sure how I arrived at it either.

I knew I wanted to be a unique color, not just a simple blue or red dye or whatever from a dye vendor, nor a simple compound color mix of two primary dyes.

There was some pink dye lying around from one of those Pink Day in LA celebrations… I grabbed some other dye out of my stash to mix with it randomly until an interesting contrast was obtained.

The rest is history. I went through many many HoM points looking like a vaguely demonic phantom and enjoyed it a lot more than I would’ve looking at paragon armor.

Knowing a Rainment of the Lich was coming in GW2 was one of those no-brainer must buys.

During the slow time after the sales, I’d already been converting gold into gems until I hit 700 in preparation for it.

Like all outfits, it has 4 channels of dye to play around with.

I know what I’m wearing for Guild Wars Halloween.

I am recently reminded why I never bothered with Twitter or other social media avenues for a very long time.

For Bragtoberfest, I decided to pay a bit more attention to my essentially placeholder account, since some planning and meetups and call out notifications were taking place on Twitter.

Besides a sudden (and rather scary) following of people who just upped and followed me, because that’s what you do in Twitter, I guess, like blogs, except I don’t have to know who’s paying attention to what I say in blogs, it’s just there for anyone who wants to stay and read…

(Assuming they have the patience to get through all that verbiage, which I think neatly whittles out the people I want to associate with from the ones I don’t.)

…which leads to a dilemma of “Do I follow this person back in return?”

It’s not that I don’t like any of you, even if I decided not to follow you or otherwise, but it’s more about how much spam and reading overload am I inflicting on myself?

The answer, as it turns out, is too damn much.

It’s too much of a “push” technology for me.

I have my own reading list. It’s called Feedly. It caters to my own very customised set of tastes. You probably don’t want to hear about every last RSS feed I have on it, you’re probably just here for the games and MMOs topics.

I’m not going to be so crass as to suddenly stop following a whole spate of people in the hope of blissful silence once more, but I’ve decided the best way is to simply stop paying attention to and checking my Twitter account.

(I’ll make a small exception during the time period of the Bragtoberfest TF2 meetup and other such planned events, but I’m discovering that Twittering daily or more times than that is like asking to be placed on a spam list. Self-inflicted owwie.)

Hermits gotta be hermits. Noise is not conducive to hermitting.

But to be polite, in case someone is trying to contact me and wonders why I’m not responding, it’s cos I’ve stopped checking.

Feel free to poke me here on this blog or over other avenues to “hey, go check it for some purpose or other” and I’ll gladly do so, but I can’t do this “Hi, I’m here to see what spam my friends (or celebrities) have decided to send me this day/hour/second” thing anymore.