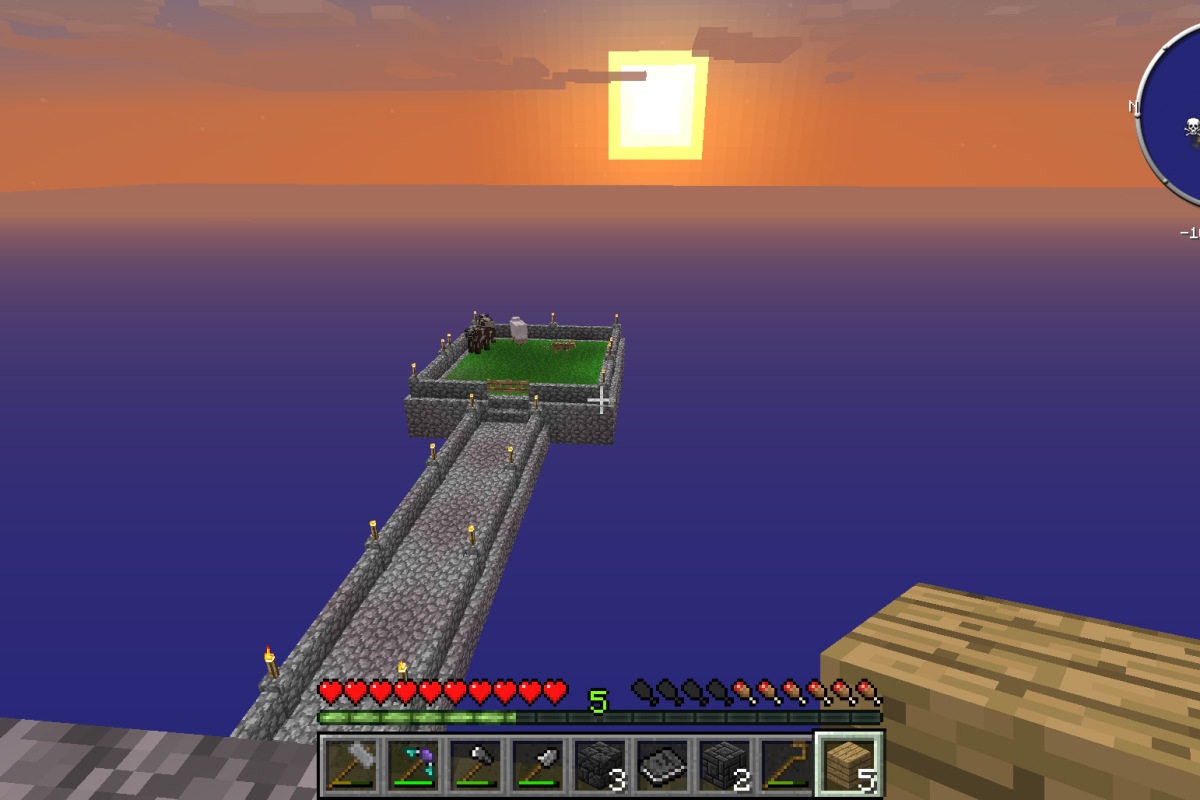 Pete from Dragonchasers has been on the hunt for a single-player Archeage – that is, a farming, crafting, home-building and occasionally get out and kill things sort of game… without the 4h queues.

While I personally couldn’t quite think of a game that plays in an exact similar vein as Archeage, as in 3D WASD mouselook, MMO quest-driven, with trade runs and sailing, as well as crafting, farming, home-building, etc…

… I can think of games with bits and pieces here and there.

Trade runs and sailing is one of those systems that I haven’t seen done for a very long time since the days of MUDs. I vaguely recall some MUDs I encountered in my sampling days where these were a thing. Beyond that, the closest we’ve gotten is in the sci-fi space trading genres, where one effectively flies a starship from planet to planet and station to station buying low and selling high.

Modded Minecraft has been the popular recommendation over in the comments section @ Dragonchasers.

Blue Kae mentioned Agrarian Skies and Crash Landing as popular challenge maps, and I simply couldn’t resist checking at least one of them out.

(It was about time I dabbled with the Feed the Beast launcher anyway, which appears to be the other popular launcher that isn’t the Technic Pack – which I dabbled with, when I tried out Minecraft: Hexxit some months earlier.)

I haven’t logged into GW2 longer than 15 minutes in the past two days, having chosen instead to feed all available leisure time into Minecraft, which is as much testament and recommendation as I can give to this particular mod.

Agrarian Skies is a Skyblock type of map.

In case you’re just as outdated as I am on the latest fashions in the Minecraft modding world, what this apparently means is that they dump you off on a floating rock in the middle of nowhere with nothing but void surrounding the dinky island.

Basically, you’re on a block in the sky.

And it’s time to start fending for yourself, with whatever resources the creator was kind enough to supply. Hope he or she was feeling magnanimous.

Installing Agrarian Skies was fairly simple and painless, though one did run into “doh, that wasn’t obvious to a newcomer at first glance!” issues.

2) Navigate over to the 3rd-Party Packs tab and select/install Agrarian Skies.

3) Launch Agrarian Skies from the button shown, select Single-Player Minecraft, create a new world and promptly fall out of the sky and die repeatedly until all three lives were lost and the map deleted itself.

Apparently, one had missed Step 2.5, which is:

2.5) Navigate over to the Maps & Textures tab,  and click on the Maps button. This brings up three maps for Agrarian Skies, which you can choose to install.

Step 3 then consists of selecting the pre-existing map, so that you get dropped off where there is actual solid ground – rather than creating a new world, which led to the looping death scenario.

Except that there’s only one block of dirt on this island. The rest is colored hardened clay.

In a chest in the house, is one of each type of basic sapling – oak, birch, spruce, etc, three stacks of bonemeal and a couple of guide books from some of the mods installed.

Your quest, should you choose to accept it, is to rebuild the world.

The especially nice thing about Agrarian Skies is that it comes with its own version of GW2’s Level Up Guidance System, so that completely clueless noobs like me don’t just stand there, looking aghast, trying to read up a dozen wikis figuring out where to even BEGIN, and promptly starve to death in the interim.

It’s called the Hardcore Questing Mode (or System) and essentially provides direction for beginners, leading them through and ensuring that the player ends up familiar with the various crafting pathways that will unlock more complicated technologies later. 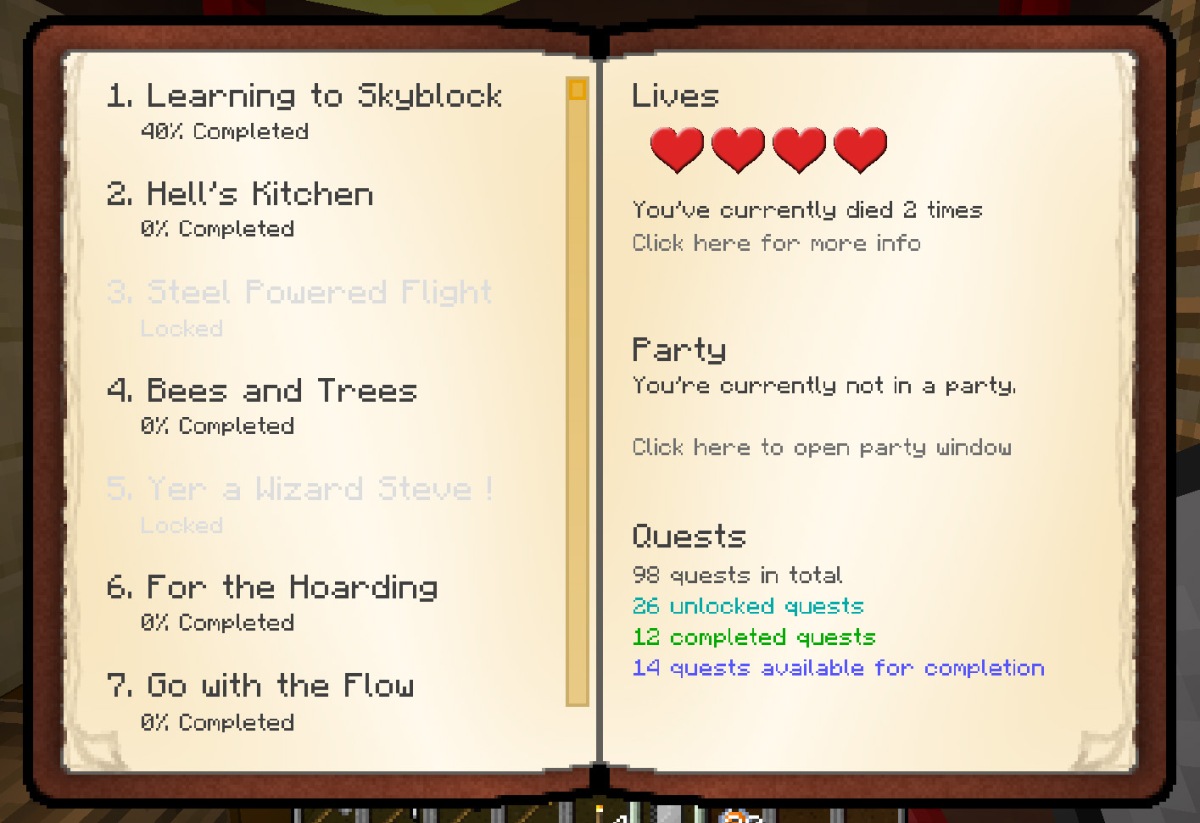 The first section, as you can see, is basically a tutorial in learning how to skyblock – or survive in a Skyblock map.

The others appear to be about cooking, machinery, bees/forestry, magic?, storage systems, and fluids and so on.

One has a limited number of lives. One can earn more by completing said quests and getting the quest rewards.

Yours truly died once by accidentally digging through the block that one was standing on – trying to replace clay with farmland – and then subsequently followed that up with another by attempting to retrieve all the dropped items by flying down to the impact zone in creative mode. Note to all: it doesn’t work. (I think I must have forgot to toggle on god mode. Oh well. I sucked it up as a penalty for trying to cheat and just made new tools for my new life.)

The beginning reminds me a lot of starting out in A Tale in the Desert.

You start with practically nothing, engage in a number of repetitive actions to accumulate a resource, which then unlocks another resource, and on and on. Ultimately, you’re striving to unlock the tech tree to the point where you can afford automation and industry.

One dirt block equals one tree grown. (Thankfully, they supplied bonemeal to speed this up on demand.)

Repeat until one has sufficient wood to build various workbenches, including the Tinker’s Construct workbenches which open up an entire system of creating intricate tools. I’d previously encountered an earlier version of Tinker’s Construct in Hexxit, so it wasn’t too perplexing, but a newbie would probably spend some time playing with the whole thing.

How does one obtain more dirt? The questing system tells us how.

We have to create barrels to compost organic material into dirt.

There are a few not-so-obvious ‘stuck’ points that are not explained, probably under the assumption that any Minecraft player who plays around with mods are so used to and take for granted.

Use of the NEI is pretty much assumed.  That is, the “Not Enough Items” inventory mod that allows a player to flip through and keyword search through all the various items supplied by all the various mods, and look up recipes by pressing R or right or left-clicking on the item in the NEI.

I started out not so familiar with the NEI, and ended up Googling for info initially, but one eventually does get used to it.

The above barrels are quite neat. Covered, as above in my little composting shed, they accept things like saplings, leaves, rotten flesh, carrots, wheat, etc. and turn it into a dirt block.

Uncovered and left open to the sky, they collect rainwater until they fill up to 1000 mB and can fill an ordinary bucket as water.

From there, it takes you on a journey to obtaining string (via the most hilarious silkworm farm ever – contrast this with the utter brain-destroying pain silkworms are in ATITD), and working out how to create cobblestone from virtually nothing. 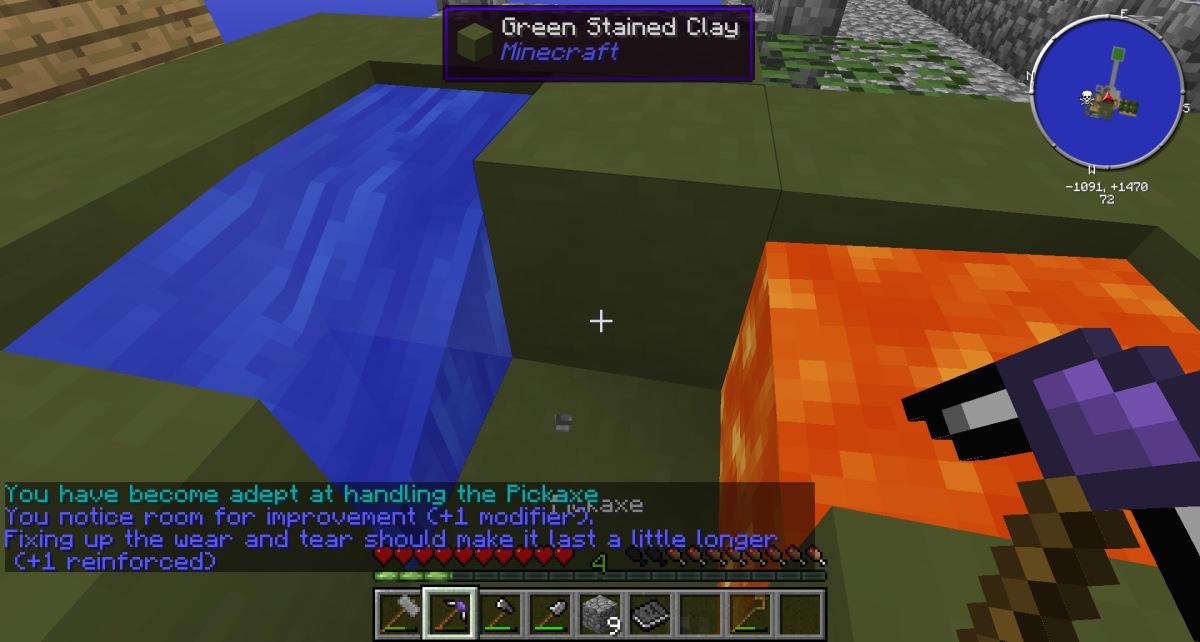 Also known as a cobblestone generator.

I have never been prouder of obtaining cobblestone in Minecraft before this.

You see, getting that one lava block was no trivial matter.

Dirt blocks – each one painstakingly composted from the death of many trees – are run through a Sieve to get stones. Stones are assembled into cobblestone.

The dust is soaked in a barrel of collected water. (Hopefully, you already made an infinite water source some time ago! Though you’ll need a fired clay bucket to move water around in, without an iron bucket!)

This wet dust turns into clay. The clay is combined with bonemeal to form porcelain clay, and shaped into a crucible. This is fired in a furnace to make it functional.

The crucible, atop a heat source, will melt 4 cobblestone into 1 lava – which you pick up in a bucket. Except if it’s a clay bucket, it’s good for only one use.

Imagine my utter agony when my first attempt at a cobblestone generator… yielded an obsidian block, because moving water came into contact with stationary lava, instead of the other way around.

For my second go at it, I decided not to reinvent the wheel and copied the simplest cobblestone generator from the Minecraft wiki page so that absolutely nothing could go wrong.

Agrarian Skies does a marvellous job of making what are typically commonplace materials a rare and valued resource. This does change the feel of the game considerably.

Every last cobblestone of the modest bridge took effort to produce – even if it’s just mining it off a cobblestone generator. (One day in the future… we look forward to automating the process!)

Room for the tree farm, and the trees themselves, were created from almost nothing – just one sapling and a lot of bonemeal.

The modest farm that holds starving to death in check? (Yes, you can starve to death in Agrarian Skies, and food items don’t fill you up as much.)

Every block assembled with invested effort. No free digging stuff out of the world like in regular Minecraft.

And it’s only the beginning. 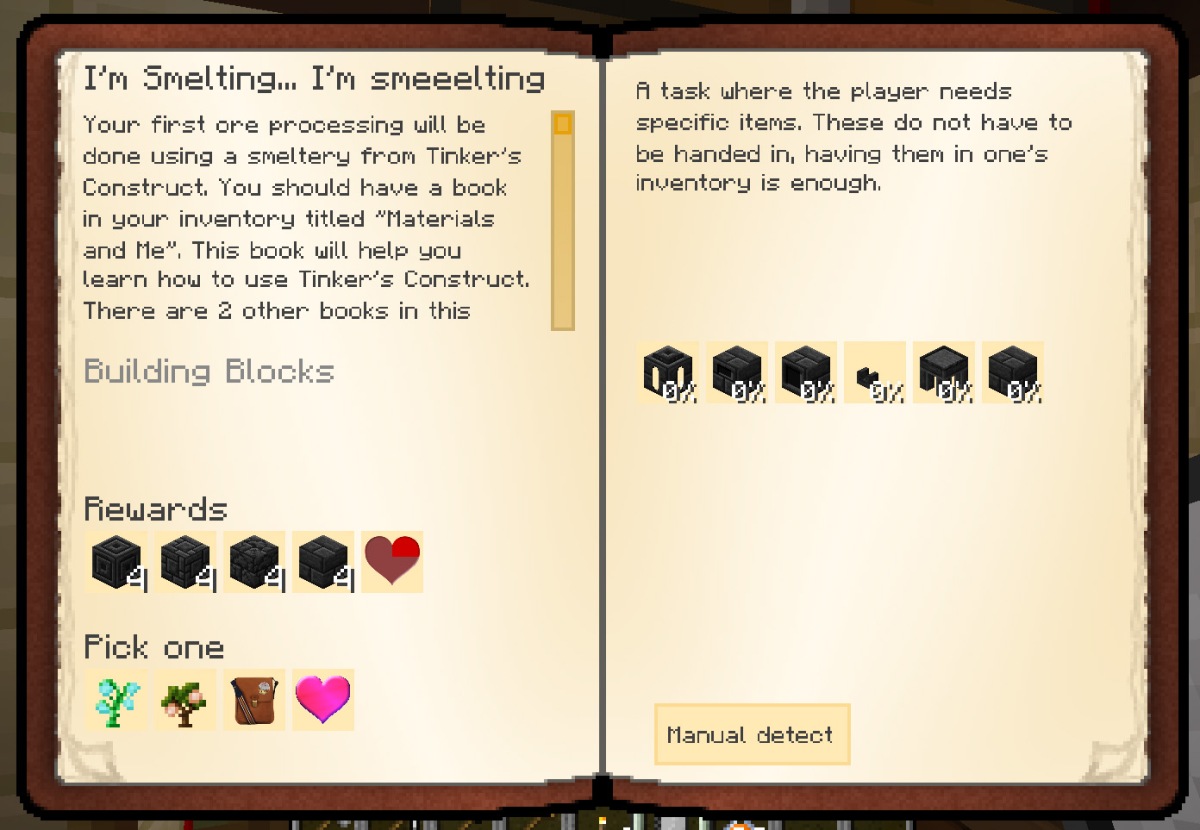 My current project is the Smeltery, from Tinker’s Construct. Something I’ve, thankfully, done before with Hexxit.

Even then, one has to figure out where to put it!

There is no more room left on the island, which means room has to be made. Which means a floor of cobblestone somewhere, at the very least…

I assume there is automation and fluids somewhere in the far future. There’s a Pam’s Harvestcraft mod that seems to expand to a ridiculous amount of fruit trees and cooking recipes. There’s beekeeping. There’s the Mariculture mod – or marine aquaculture, I presume.

Where Minecraft: Hexxit places the focus more on an adventuresome exploration of a fantastic world, with farming and crafting and home-building more in the background, Agrarian Skies is a mod that places progressing through the crafting aspects front and center.

Along the way, one will unlock more and more blocks, from which to assemble the world itself, in a manner that pleases you.

The planning of which becomes ridiculously addictive.