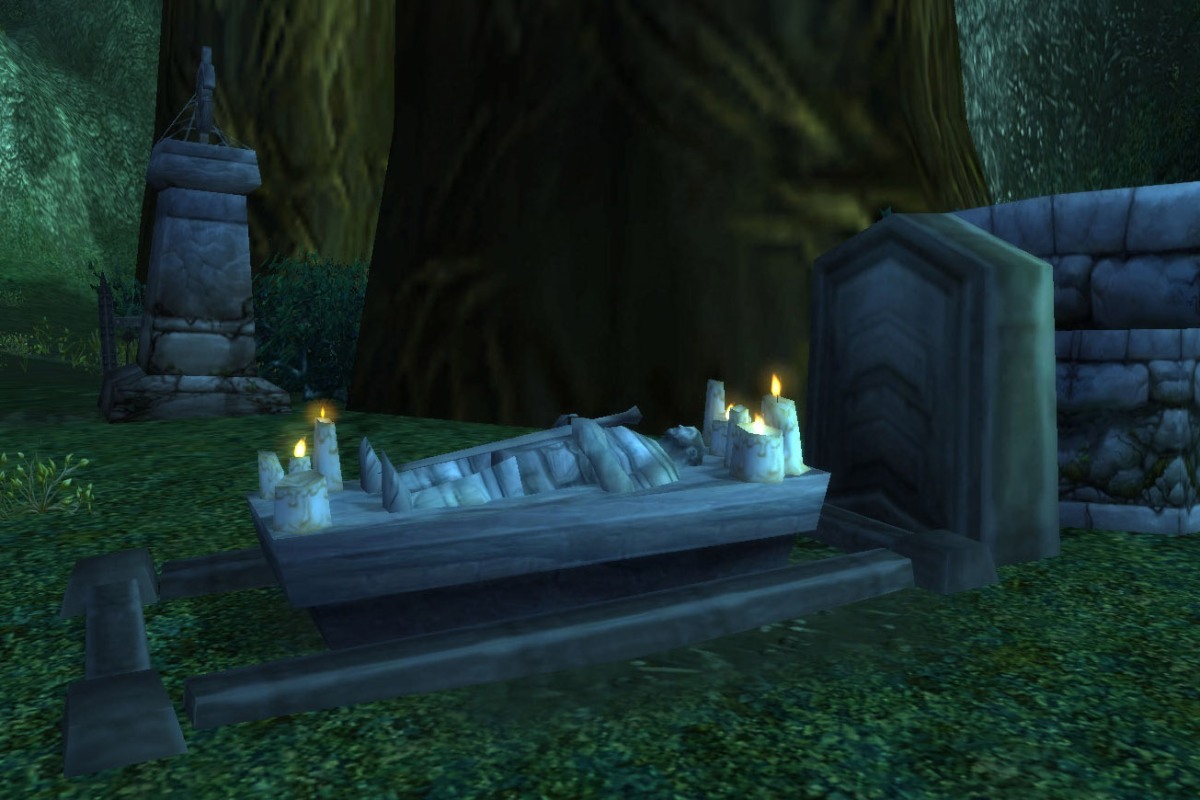 Like it or not, WoW has been an institution in the public consciousness for a very long time.

The 10 Years, 10 Questions survey by ALT: ernative Chat seems to have taken off like wildfire and become at least a shared point of reference to unite the now disparate interests of MMO game bloggers for a time.

So why the hell not join in?

Though these are thoughts from a WoW contrarian’s POV:

1) Why did you start playing World of Warcraft?

I attempted it twice.

Once was juuust before the game officially launched, when I decided that even though I was burned out like hell on the raid concept and avoided Everquest like the plague, I may as well take advantage of the FREE beta to give the game a fair shake before dismissing it.

It took about 3 continuous days of leaving the computer on in a sweltering tropical climate wondering if I should use up even more electricity by running the air-conditioner for 72 hours to cool the computer down to download the client.

Something about their fancy bittorrent strategy to save bandwidth costs on their end, wasn’t playing well with my ISP. My download speeds were throttled, and throttled good.

That was, perhaps, not the best of first impressions.

Of course, since I left it till the last minute, I literally had about 1 hour of game time, snatched in the morning before I had to leave for work, after which WoW would officially launch and I’d have to pay to play it. Box + Sub fee. Quite a big hurdle to overcome.

I made a Tauren… something. Druid, I think.

Logged in, admired how clearly they laid out everything for newcomers to the genre (I’m a big fan of well-designed tutorials, even if I don’t need them, because well, they show good design and successfully attracting and retaining newbies without turning them off = success) and attempted to do some quests.

Somewhere just past retrieving something from the well, and facing the prospect of goodness-knows-how-many Kill X Whatevers quests in a tutorial area I’d seen was small and cramped and limited (for those said newbies not to be confused, I geddit), I said, there’s no way I’m getting past this in an hour, this is kinda boring, I don’t want to raid anyway so no interest in endgame, so what is the point of advancing further? Just to see numbers exponentially go up?

Then I nope’d right out.

Cue a long period of doing just fine without WoW and forseeing burn out of many at around year 4.

Couple years later, colleague at work started playing WoW like an addict, bringing his shiny new laptop in to sneak in game time during downtime periods.

Ended up essentially spectating him leveling, going through Battlegrounds and so on, mostly with a tolerant knowing smirk that the raid endgame wasn’t for me and trying to sell him on City of Heroes instead.

We sort of peer pressured each other to try out our favorite MMOs. For a time, anyway. Like the free month on the box, in both directions.

The one thing that ended up selling me on a second try of WoW was the smoothness of how his hunter went from mob to mob killing stuff. I -love- smooth, slick, medititative combat grind or farming, whatever term you want to use when referring to killing a whole bunch of easy mobs in quick succession.

The animations were quick and responsive and a little cartoony but just felt good even while merely watching him play.

I guess I could stand to buy a now-cheaper box bundle of WoW plus the Burning Crusade expansion and just enjoy the feeling of combat for a while.

2) What was the first ever character you rolled?

Tauren Druid, I guess. Because it could shapechange and stuff, and I like monster-y races.

I rolled it a second time when I re-tried WoW again, and this time managed to get up to the level where you could turn into a bear, and then the feral cat. Enjoyed the smoothness of the feral cat DPS combat quite a bit, but then had hunter envy watching my work colleague solo stuff and crank out level after level.

I think it was around that time that Cataclysm dropped as well. That was another reason to try WoW, I wanted to get a quick sense of the ‘before’  and then see the ‘after’ and check out what had been  ‘improved’ on.

Post-Cata, I rolled an Undead Hunter – a skeleton archer that ended up reminding me of Clinkz from DOTA.

That became essentially my “main” or the leveling character that got the furthest ahead, up to level 63, thanks to the well-arranged but very meta-gamey post-Cataclysm quest hubs.

I got up to the first flying mount level, flew around for a bit, ended up in the… Outlands, is that what it’s called? The Burning Crusade content level range, which was still full of the oldschool BORING Fed-Ex Kill Ten Rats shit (except now it was more like kill 27 somethings, and there’s a good chance it won’t drop the entrails you want anyway, so it’s really kill 33 more)… and cracked.

Couldn’t take it anymore, and gave it up as a bad idea yet again and ended the sub.

To this day, the poor skeleton guy is still logged-off somewhere in that other dimension.

3) Which factors determined your faction choice in game?

Um, I played orcs in the Warcraft RTS games?

Because there were far more interesting monster-like and ‘ugly’ races over Horde side than the boring pretty humanoid ones on the Alliance side?

And it didn’t really matter anyway because I just hopped to another server and rolled a Draenei and a Worgen to try them out, the only two races I had a real interest in on the other side.

4) What has been your most memorable moment in Warcraft and why?

Let’s see: it would either have to be the first breaking point where I nope’d right out of the last 5 hours of the beta.

Or it would be somewhere around that time where I went swimming to some island just off the Orc coast (I can’t even remember what class that Orc was), across the way from some NPC troll village and then accidentally died to a shark or something in the water.

I’d apparently crossed some zone boundary or other without knowing it, because I turned up as a ghost at the ‘nearest shrine’ and when I rezzed there because there was no fucking way I was going to retrace my footsteps all the way back to the frickin’ ocean, I was like level 15 in a level 30+ zone.

EVERYTHING was a deep deep purple.

Cue a whole series of deaths, where I was calculating my chances of dying in sequence trying to ‘shrine hop’ towards a zone where I would maybe stand a fighting chance?

Ended up eventually reaching a town / quest hub where I found a more-or-less affordable (ie. nearly everything my lowbie had earned via quest rewards so far) griffon ride taxi back to the “correct” zone for my level range, cursing under my breath about being penalized in monetary terms for exploring, instead of being a good orc peon and following the defined questing route like a carrot-seeking Achiever.

Or it would be the second breaking point where I stood in the middle of demon-infested lands and couldn’t repeat the same thing I’d been doing for the past 63 levels, just in less hidden, less streamlined and not-much-story form.

With memories like that, I suppose that explains why I don’t really play WoW.

5) What is your favourite aspect of the game and has this always been the case?

How smooth and slick the dang combat is, animations and all.

It got someone not at all impressed with the foundations of WoW (vertical progression, bait-and-switch leveling to raid game, raid endgame) to play the game for a time, just to enjoy pew-pewing stuff for a while.

I bet they had a testing and iteration period where they really -nailed- the optimum time-to-kill for a normal mob to fall over and die, how many attacks it should take to feel right, and so on.

It works. It really does. It has this ridiculous addictive “just-one-more-mob” quality to it.

6) Do you have an area in game that you always return to?

Err… considering I can barely name any area in game, the answer has to be no.

Maybe Orgrimmar, if only because all my Horde characters end up funneled there in the “proper” course of things? An inn, because of rested XP?

7) How long have you /played and has that been continuous?

In real life terms, maybe a month or two or three’s worth of sub time?

Not continuous, no. The longest was that two month stint casually leveling the skeleton archer, I mean, Undead Hunter.

Then I compared the quality of the couple of sentences to the longer elaborate sagas found in LOTRO, where I actually had a vested interest in the lore, and gave up doing it in WoW.

Easier to do like the Romans do, put on a Quest Helper mod, follow the shiny dots and arrow and play the game efficient OCD Achiever-style. It’s primarily the main playstyle that’s rewarded by ding after ding, after all.

9) Are there any regrets from your time in game?

I do kinda regret how this massive WoW giant etched into the collective gamer consciousness an “understanding” that THIS IS THE ONLY WAY THINGS SHOULD BE and that every MMO should feel and play like WoW.

But I’ve gotten over it and decided that with the passage of time, enough people will burn out of this phase to populate other games, and one may as well look at the silver lining and say that the WoW zeitgeist at least introduced a ton more people than would have otherwise got into MMOs or games to the basic concept.

10) What effects has Warcraft had on your life outside gaming?

Perhaps providing a vague frame of reference or conversation topic, where one actually meets another person in real life who admits to playing MMOs and then it turns out that they only blindly and faithfully play WoW, and then we end up exhausting that as a subject because it’s either I smile and nod politely while they tell me all about the next piece of gear they’ve gotten from a random roll (sorta like being accosted by that stereotypical someone who just wants to regale you with all the stories his last D&D character got up to, though that’s never really happened to me)…

…or they try to get me hooked “You should play too,” which then naturally segues into asking why I don’t, and them blinking with uncomprehending eyes while I bite down on the words ‘endless treadmill’ and ‘hamster wheel‘ and try to explain the difference between vertical and lateral progression options, and inclusive versus exclusive mindsets, and how clever game design can affect the way players behave in-game.

The conversation tends to stop after that.