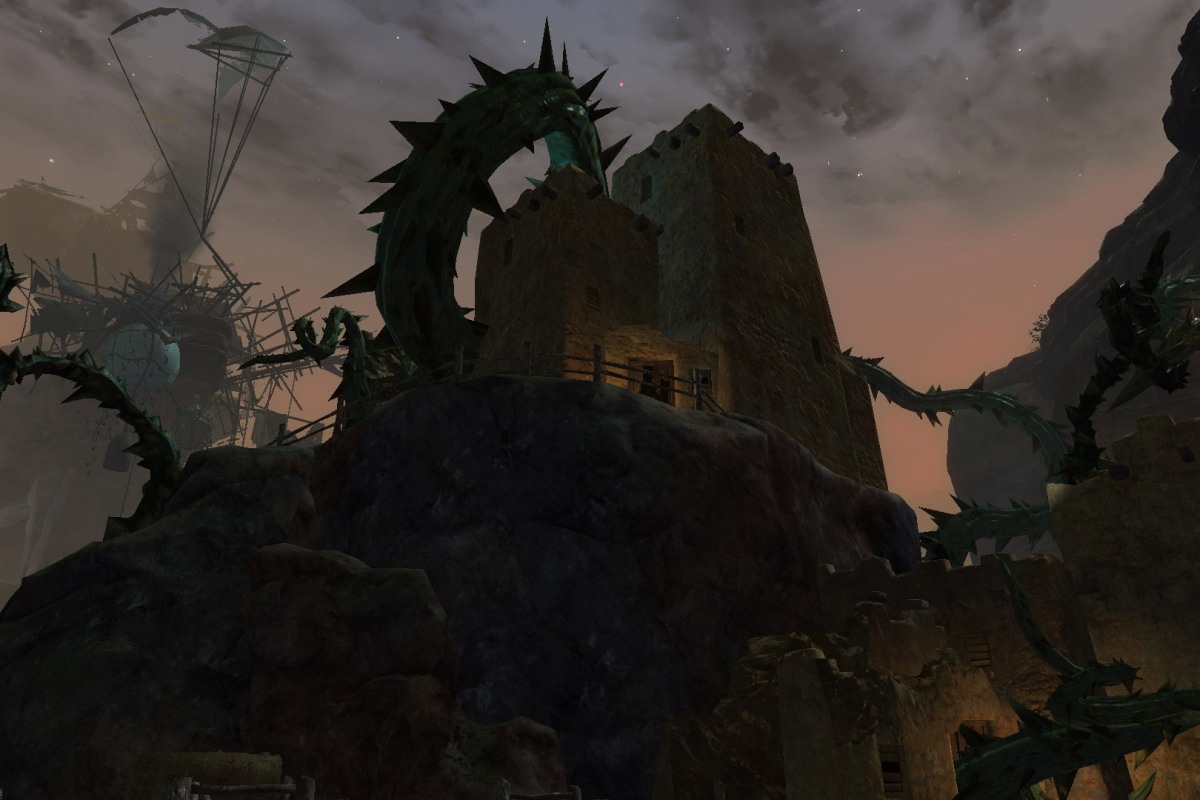 Going to write this post without spoilers, and I suspect I will end up echoing Bhagpuss, dancing around in generalities and going “Blimey, Charlie!”

Except my phrase veers more towards “Damn, that was satisfying.”

Not because I liked what happened in this episode, mind you – some bits veered towards the dangerously melodramatic – but because from a structural and design perspective, I think Arenanet has hit upon something promisingly good here.

We go back to Guild Wars 1 yet again, where each story mission one played through meant a development of the plotline. There were ups and downs and change happened.

You remembered them because you got to play through each and every episode, at your own pacing, rather than end up with gaps in the story because you couldn’t log on for that particular week or two.

Much of GW2’s first season reminded me of a family roadtrip where the players kept stridently asking “Are we there yet?”

A tiny bit of plot happened, a small part almost lost in a larger picture of frantic open world achievement and taking on whatever new mechanical developments there were (often in a zerg fashion), leaving players confused and perplexed by the one-liner plot, often summarized as “Something happened, and we still don’t know what’s going on,” then later, “Scarlet did it.”

Like an amateurish novel writer who thinks all the mystery would be lost if the readers actually knew what was going on, the writers played everything with cards close to their chest – hinting at something happening, but not saying much more than that. That led to plenty of unfounded speculation, some of which was much better than the simplistic linear plot actually taking place but not shown to anybody.

Some players might have wanted to know more but having to wait 2-4 weeks later (an understandable and reasonable length of time for the actual game experience and rewards earning part of temporary, seasonal content) for the -next- story snippet, generally made everybody stir-crazy in the process and having promptly forgotten what happened before by the time the next update rolled around.

For instance, some players are still trying to figure out why we’re suddenly such pals with the B-Iconics, or Destiny’s Edge 2.0 and how they’ve ended up calling our characters ‘boss.’

I drew a blank when first thinking about it too, but cudgeling the brain reminded me that I first met Marjory and Kasmeer to solve a Lion’s Arch mystery that involved an Aetherblade attack, meeting them at the Dead End Bar in Divinity’s Reach.

From there, we went on to fighting together in the Tower of Nightmares, taking on the Marionette, defending the city of Lion’s Arch from Scarlet and so on. One almost doesn’t remember it because one mostly only saw the NPCs in passing, in the open world, usually when the brain is busy focused on not-story but achieving something.

We go even further back with Rox and Braham, when they were refugees from Flame & Frost. We fought with them through the Molten Facility (some of us through several dozens of Molten Facilities, dat monocle drop! Beet soup was the best I ever got.)

I vaguely recall helping Rox with Tequatl, oddly trying to track down the beastie  with a footprint, though he usually came by on the hour every hour and has subsequently been taken apart repeatedly to the extent that everyone mostly remembers the Tequatl’s Hoard drop (or lack of it) as the most memorable incident of that update, and not the actual plot step.

We were there with the whole group through the Crown Pavilion and Queen’s Gauntlet events, preventing Queen’s Jennah’s assassination and fending off endless waves of invading Twisted Clockwork, we investigated the Fractals and the Edge of the Mists with some of them, and there were probably more things that I don’t remember offhand.

Each story step was so piecemeal and staggered, disconnected in theme and linked only tenuously by a mad sylvari, that it’s hard to absorb that it all really did happen.

In Season 2 of Guild Wars 2, I can confidently answer, “We may not be there yet, but we’re certainly -moving.-”

The sense of movement is evident in the storyline now.

Things happen. The plot is better structured and developed. There are going to be more obvious ups-and-downs akin to GW1. More “your character is important and the center of your universe” focused stuff, and not just “your character is one of a big faceless crowd in the open world.”

There’s a sense of movement with the opening up of a new part of Dry Top. Exploration is going forward.

NPCs are moving along with that – the very talkative and almost-annoying Priory NPCs have changed position and are now saying different story-and-lore related stuff.

NPCs in the town of Prosperity are reacting to the preponderance of massive vines that have suddenly grown up all around them. (That’s not a spoiler, I hope, that seems to be the most obvious part of what was going to happen in an episode titled “Entanglement.”)

Dry Top is now twice as big, with new things to do in the part we haven’t seen yet.

Presumably, we might be opening up more zones in the Maguuma jungle this way, over time, and I’m good with this.

Players will still be focused into a relatively small region at any one point in time. Folks that come later might miss some of that launch feel, but still have the option of working their way through the area by themselves at a more sedate, casual, solo pace. (Just don’t expect to unlock all of the zone’s Favor mechanic tiers by yourself. Higher tiers are definitely group content.)

The only negative I can think of is that we’re still missing a good transitional cutscene between episodes.

Between the Labyrinthine Cliffs and Episode 1: Gates of Maguuma, we know the Zephyrite ships exploded and crashed. We don’t actually see that happen in-game, but only as a teaser trailer outside the game. Our transition on entering the zone is just seeing the wreckage of the Zephyrite ships, but not what actually happened.

Between Episode 1: Gates of Maguuma and Episode 2: Entanglement, vines have suddenly grown up in a lot of places. If you follow developments on Reddit, or just paid attention to what was gradually changing around you, you might have caught sight of vines starting to tap on waypoints like they’re Mordremoth’s new snack to nom. But it still feels a tide abrupt to suddenly walk into Prosperity and go “WTF, when did this happen?” 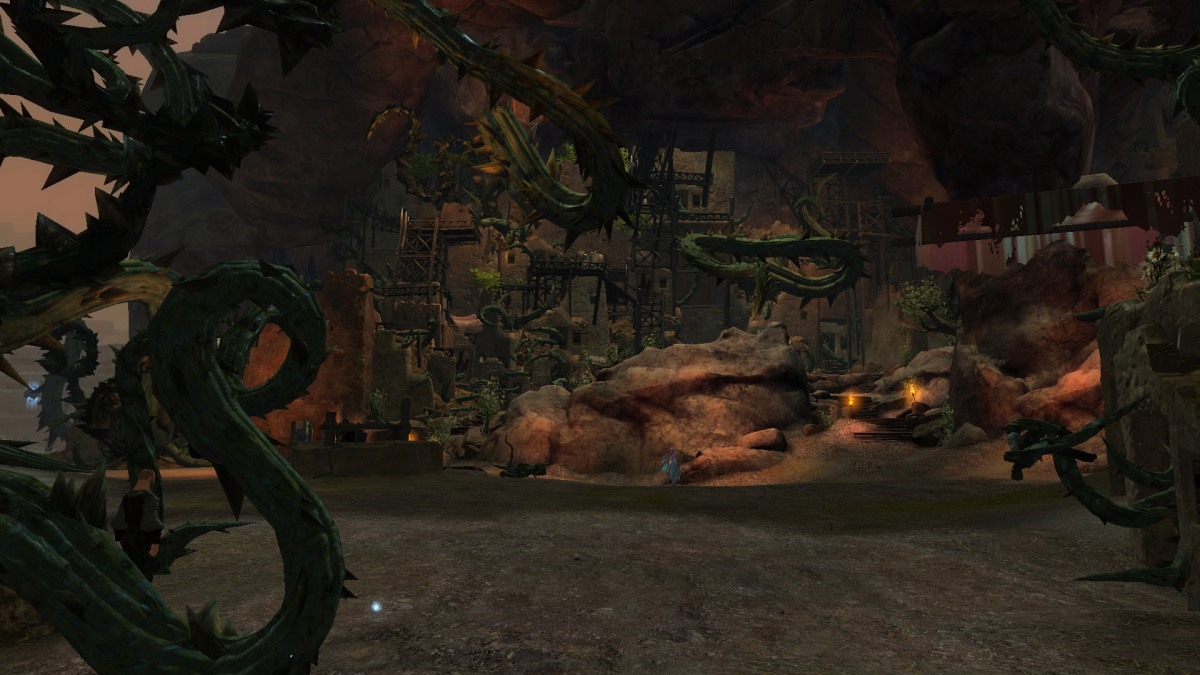 An introductory cutscene on a clickable button in the Story Journal, or that plays on zone load just like in the Tower of Nightmares update, might mitigate some of that weird feeling of instantaneous change.

For the casual, what they want is -story-. That’s best conveyed in a small instance, solo or grouping at one’s choice, with plenty of conversation.

For those interested in achievements, re-use the same content and get them to do more complicated things. Players who like meta stuff like achievements generally won’t mind a repeated grind of the same content (as long as they can skip the long-talky stuff) just to get their shiny gold star for doing whatever teacher wants.

The open world opens up further, creating a feeling of progress – and folks can choose at will to casually wander through, with GW2’s organic grouping design naturally creating allies out of the players near you, or take on the zone’s content at a higher, more organized level for faster shiny but non-essential rewards.

(If only we didn’t have to taxi in people one at a time – but perhaps that is part of the intent, to force -some- player interaction and self-organization . Though it mostly feels like a workaround.)

And boy, are the rewards shinier in this episode.

The skins are here. Tons of weapon skins.

Tier 4 and Tier 5 are where they unlock, and I’m hoping this gives more impetus for more players to work on the zone’s Favor mechanic.

I’m personally digging the look of the Ambrite weapons, something that hasn’t happened in a while since the Dreamthistle lot, and I suspect it’s going to take quite a long time to work one’s way through all the geodes.

I hope this means that Dry Top is going to be a well-traversed area, something like the next Frostgorge Sound champion train, regularly frequented by a group of level 80s who enjoy a slightly more sophisticated champion bag farm.

Time will tell, I guess. I’ll see how many I can unlock before the place loses critical mass. I’ll be happy with one or two, which I’m sure is doable within these two weeks, but collecting them all eventually would be cool!

The Gem Shop Ley Line weapons are also rather appealing visually. I like the idea of carrying a symbolic reminder of a very beautiful locale that got opened up this episode. They’ve got that blue fire guardian look to them. I might end up branching out some time for Black Lion Key farming, hoping to get lucky.

Of course, beyond actually obtaining one, another problem I face is an unwillingness to change weapon or theme on my main characters. My charr guardian is red and fire. My charr warrior is yellow and metal. My asura guardian is green/blue and holograms. My sylvari necro is green/black/white/gold and gothic. My norn thief is brown and natural leather.

I have no idea who I can put it on, even if I do get one. Will figure that out later, I suppose.

In the meantime, lots of stuff to do in this episode.