Operation Fading Thunder is on its way to make contact with a member of the Triad, who has come into possession of a device of allegedly alien origin.

If true, alien activity is expected at the site as they may make an effort to recover the device.

From left to right, the team going in will be Lt. Izlain, Sgt. J3w3l, Sq. Skyrim and Sgt. Syl.

The transport lands and the squad disembarks at the rendezvous point.

On first glance, he’s the splitting image of every unsavory stereotype of a Chinese Triad mobster.

A scar runs down one eye, and he’s got the dead stare of a hitman that won’t blink twice before gunning down someone in cold blood.

Except that now he’s on the run from said criminal organization, with a very special briefcase in his possession.

This “thing” as he shows the team, appears to be some kind of alien signaling device.

Certainly, the materials that make up the device don’t look to be of any terrestrial origin, with lights blinking on and off again at strange intervals, emitting electromagnetic pulses at strange wavelengths.

Viewing through the cameras mounted in the squad’s helmets, Dr Shen suggests it might be a transponder of some kind, and that it’s best brought back to the XCOM base for further study.

The contact, who introduces himself as Zhang Shaojie, is unwilling to be separated from the briefcase, so that means extracting him along with the device.

Either that, or it’s an alien bomb.

Guess the team will find out one way or the other.

Just as the squad gestures for Zhang to come along with them, he whips out a pistol: 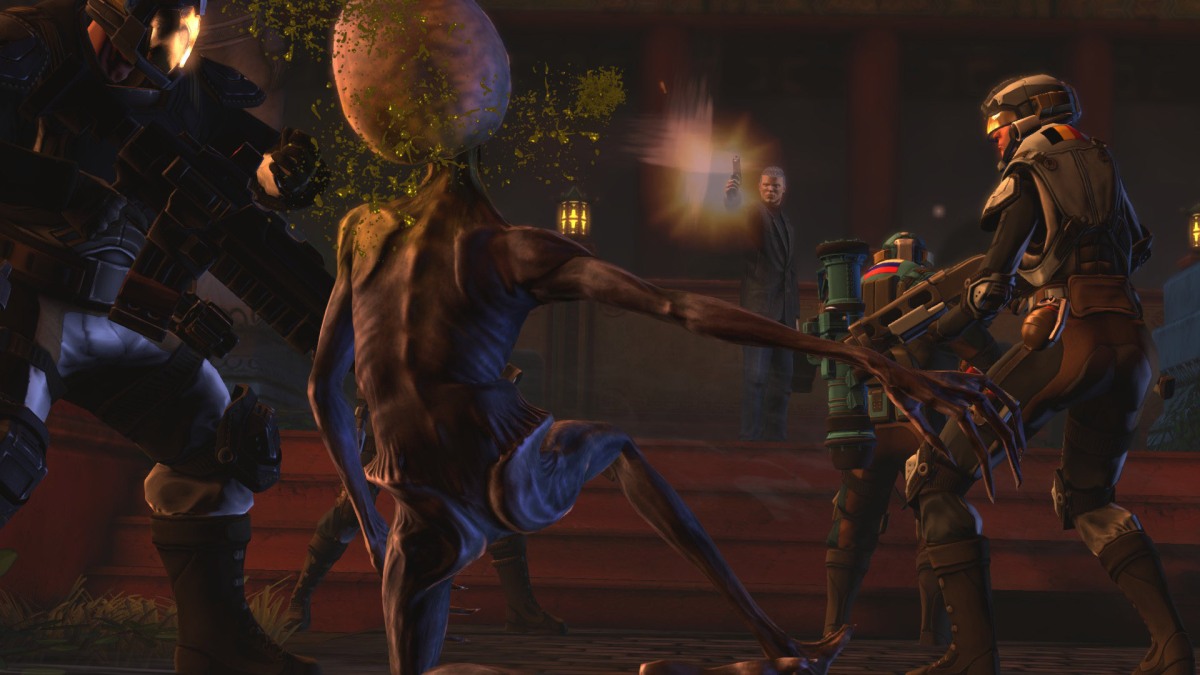 Taking out an alien that just showed up on the scene.

(Though it would have been nicer if the game -did- give him a pistol to fight with. He looks all competent in the cutscene, and then is reduced to a civilian with a briefcase in the actual mission.)

Guess that device is genuine and the aliens really want it back – or it’s a very elaborate ruse.

Well, either way, the team won’t find out by standing there all night.

The site is some kind of Chinese cemetery or temple or a cross between the two.

Sgt. J3w3l takes up a slightly elevated position behind a stone pillar that should give her a clear line of sight through the path we’re intending to use.

Sq. Skyrim moves out to the other flank as our Heavy, just in case.

Lt. Izlain will be traveling with our contact as additional protective insurance, and our Assault Sgt. Syl gets to be the squad’s vanguard.

They’re literally dropping in – some kind of phasing technology or stealthed UFO dropship that our technology is unable to detect so far?

One Thin Man shows up like a bad penny on the cemetery grounds just a little in front and below the team, and then another turns up right on the team’s left flank, a spitting distance away.

That invites a slew of reaction shots from Sq. Skyrim, Sgt. Syl and Lt. Izlain… 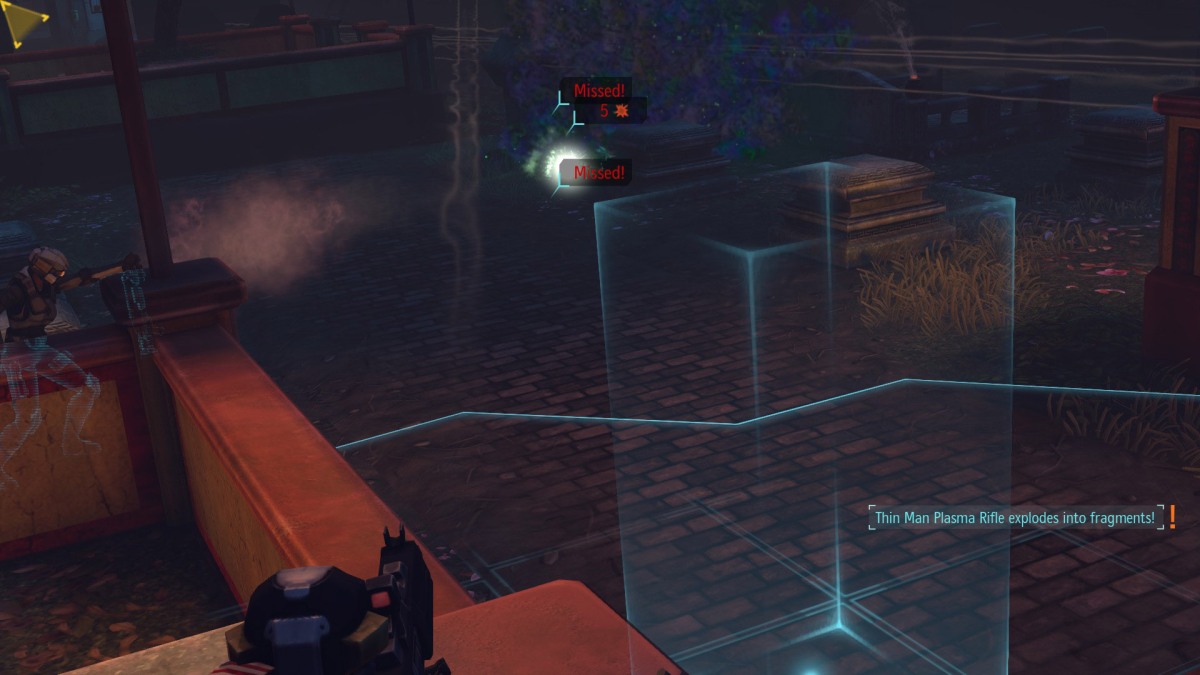 …on the first alien that popped into view. Two miss, but one hits for 5 damage and that Thin Man is no more. 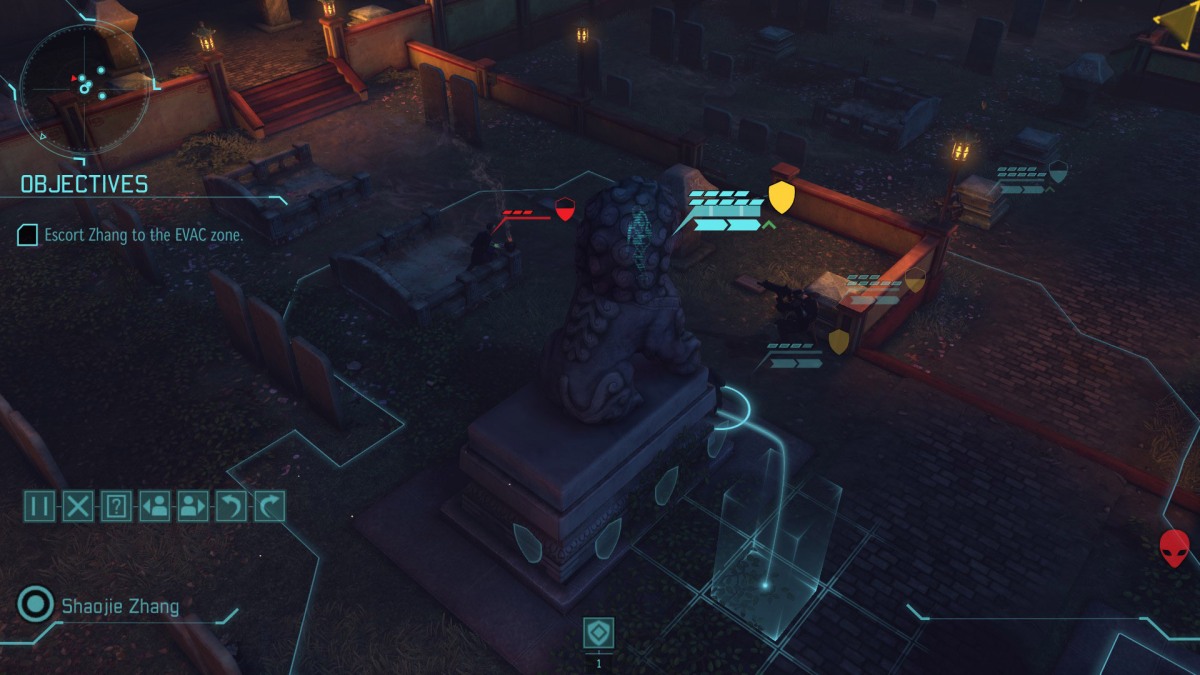 This one flanking us is still a problem though.

Sgt. J3w3l tries to hit it, but sniper rifles can be inaccurate at close range and she misses.

Lt. Izlain probably wouldn’t miss at this range, but the Commander was hoping to inch Zhang and him a little closer to the pickup point.

Our long distance Heavy gets a shot at it.

Sq. Skyrim most satisfactorily fills it full of bullets for 5 damage and converts the Thin Man into an expanding cloud of green gas, just a hair uncomfortably close to Sgt. J3w3l.

Doesn’t look like she needs to move out of the way though. Which is good. Snipers that need to move make me sad. 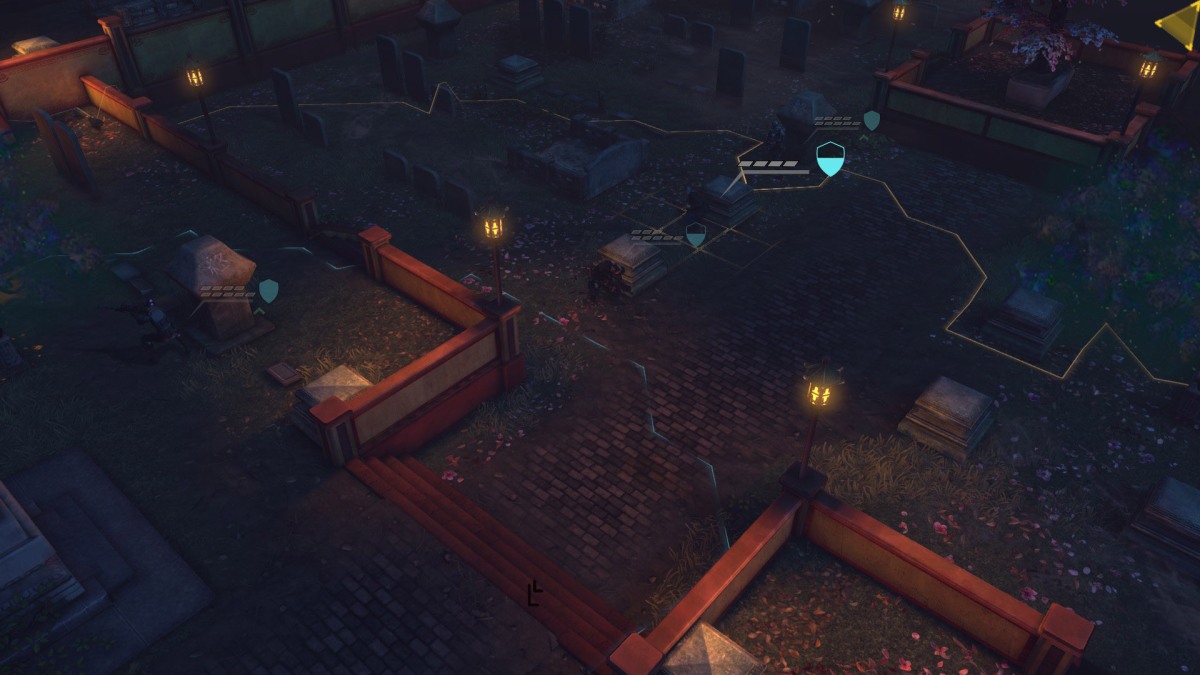 The rest of the squad moves up methodically, from cover to cover.

Sgt. Syl in front, Zhang in the middle, Lt. Izlain behind him.

In the midst of our slow midnight crawl through a Chinese cemetary, Sgt. J3w3l shows off why snipers in a good position are awesome.

Another Thin Man shows its face and tries to move. She’s in overwatch… 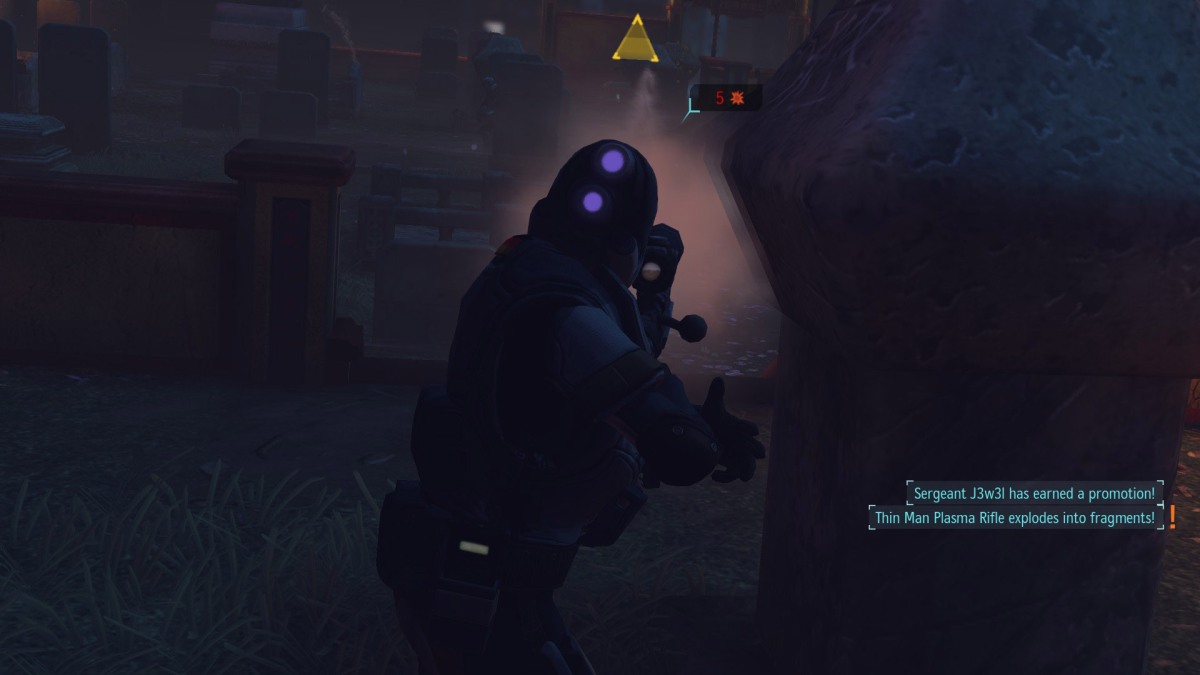 Assuming everyone gets out alive, that is.

Central alerts the XCOM team. It’s detected an alien, entirely different from the others.

We catch a glimpse of it before it scurries out of sight, obscured by obstacles – large, scaly, moving on four legs that look more like lethal bone spikes.

Like something out of Alien or Starship Troopers, one gets the feeling that one really shouldn’t get up close and personal with this species.

But that’s not the only thing to worry about.

Another Thin Man drops in, at the very heart of the cemetery, very close to flanking our squad, and -definitely- in poison spit range.

Two reaction shots, and both miss.

The four legged alien is out of sight, and the team has to deal with the more immediate threat.

Surely Lt. “Bad Luck” Izlain will be able to take this Thin Man out, with 81% chance to hit, and let our shotgunner go into Overwatch to lie in wait for the other alien? 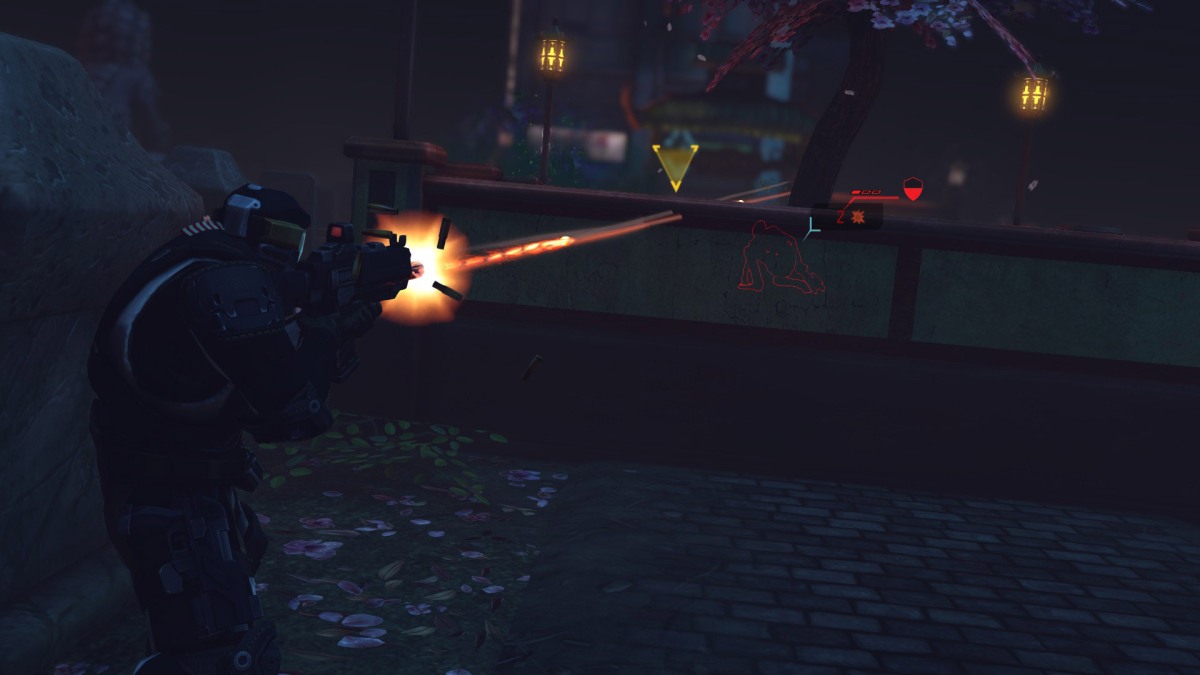 Sq. Skyrim, bringing up the rearguard, is the only one of the moving squad who can.

Along with our “eye in the sky” sniper, of course.

The four-legged creature shows itself, moving at a phenomenally fast clip.

Dr. Vahlen laments over the comm link that this alien species appears to be nothing like the others, and that any patterns or theories the scientists were previously entertaining may have to be rethought.

The team has more important things on the mind. 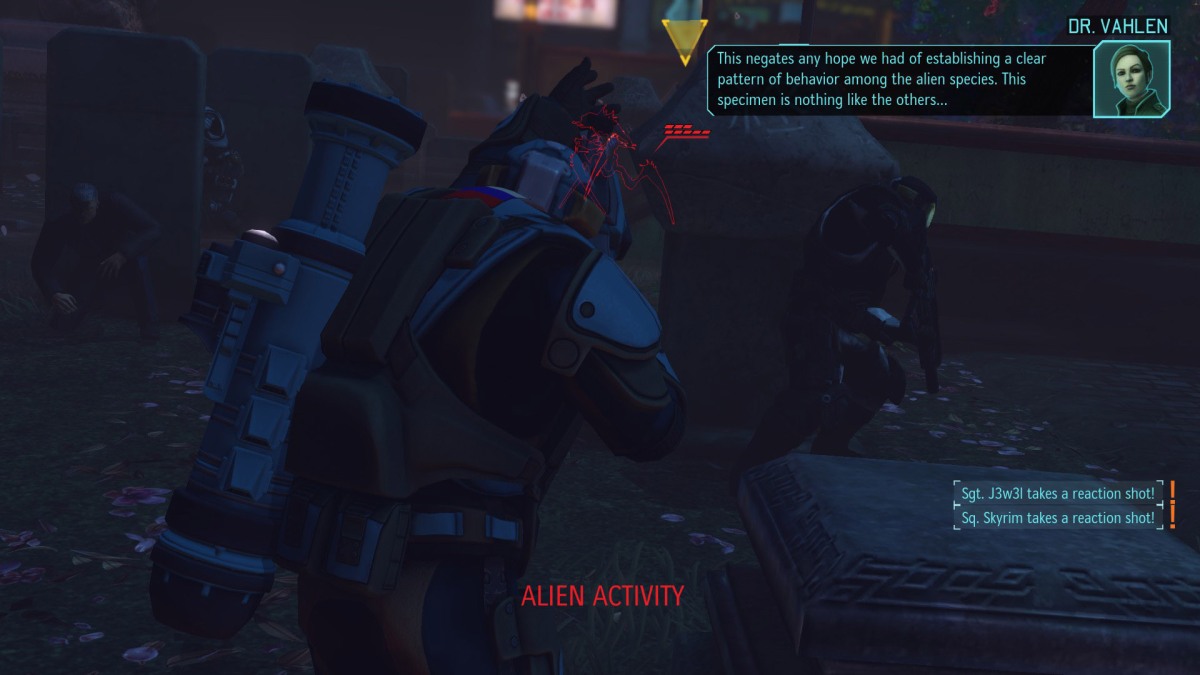 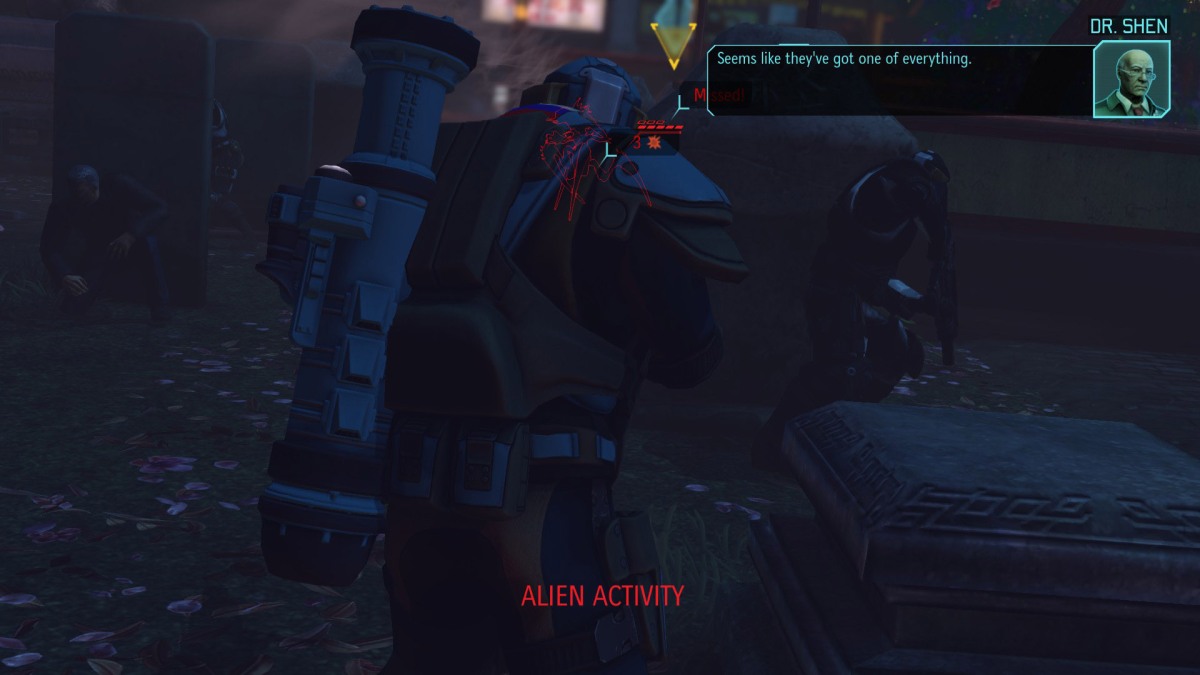 The hail of heavy weapons fire goes wide, but the sniper’s bullet is on target.

For only 3 damage though, and it doesn’t look the least bit fazed, with 5 more bars of health left.

The slavering creature positions itself right next to Sgt. Syl…

(So, how was that dead pool coming along?)