We are not alone.

Curious onlookers were drawn to the strange object, glowing with a pulsating light never seen before on this Earth.

This was a mistake.

Authorities that later arrived on-site found no trace of them, except for traumatized energy signatures that left an indelible silhouette etched into the environment.

The XCOM Project was formed in the light of these new developments. Its goal, to respond decisively to incidents of an extraterrestrial origin, and act as a first and last line of defense against any alien incursion.

Little is known about this secretive global paramilitary organization, save that it is compromised of some of the best military and scientific personnel the member nations have to offer, and that it is known to be based somewhere in Asia.

The initial baptism of fire for the first batch of XCOM soldiers is Operation Sacred Prophet.

An ongoing alien abduction is in progress in Kano, Nigeria.

All remaining civilians have fled the area, collateral damage is not a concern.

The boots on the ground today are:

The drop zone is clear.

The two squaddies move up to check the first building for any signs of extraterrestrial activity, taking care to stay under cover.

Tensing, they swing the doors open. No movement so far, from their vantage point.

Rk. Syl heads to the right, and makes contact. 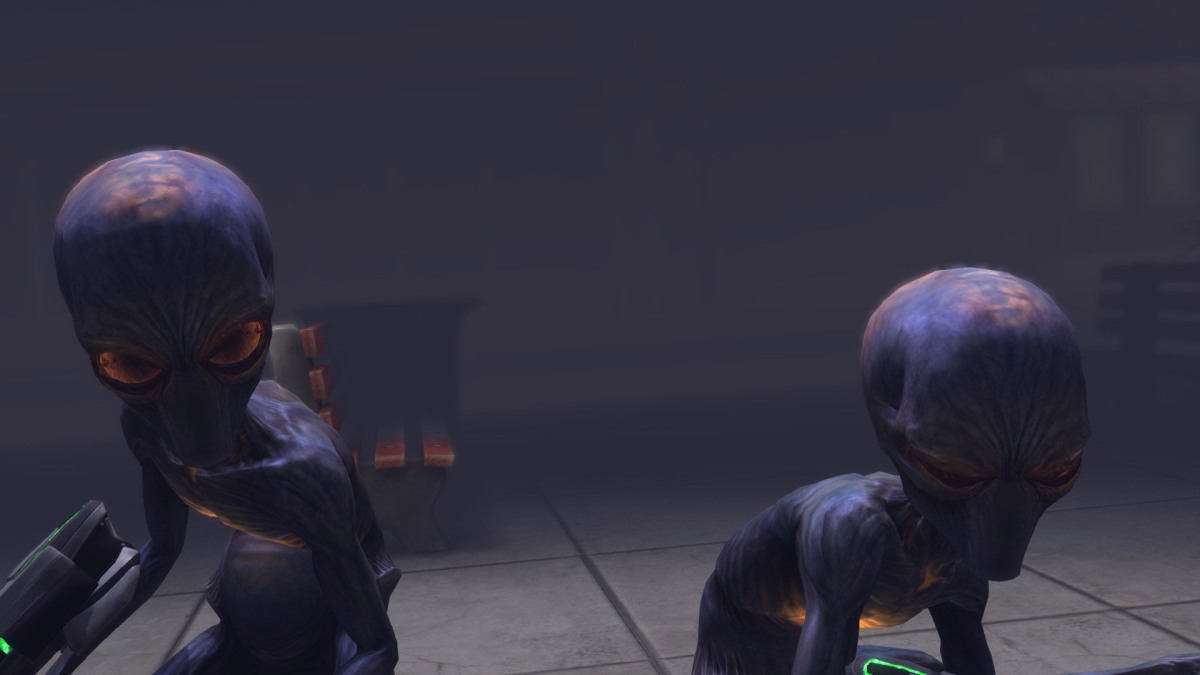 The tangos are quite a distance away. 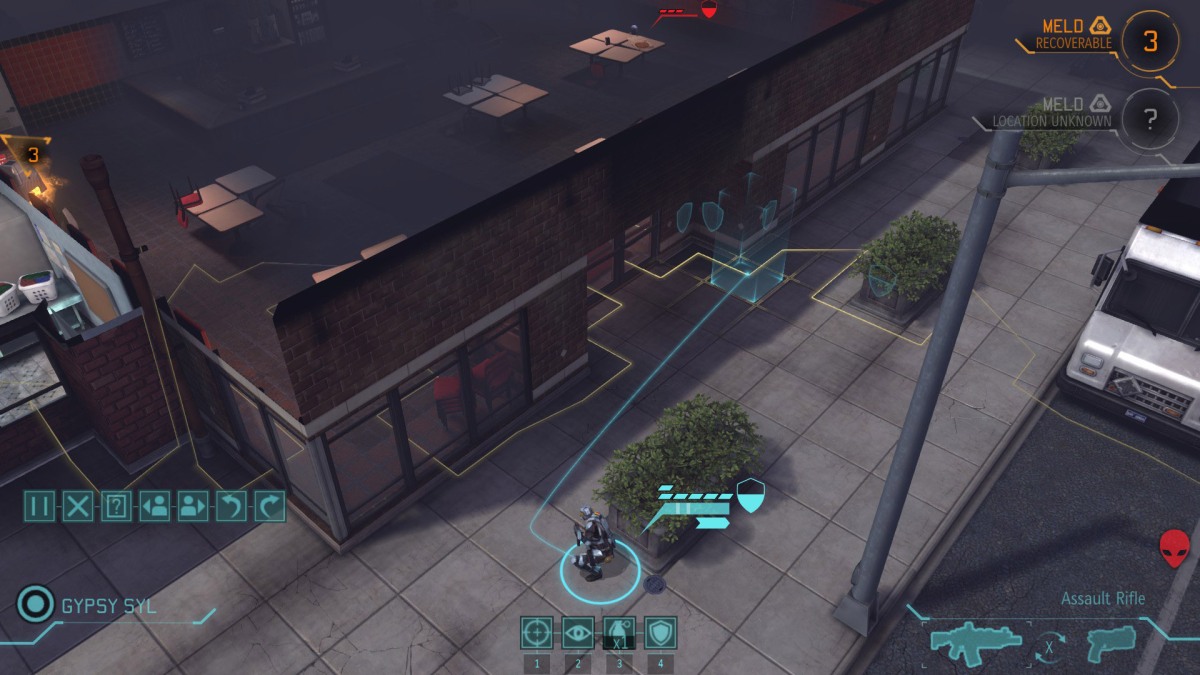 Any further movement closer would be considered ‘dashing,’ which makes firing while on the run impossible.

So Rk. Syl is ordered to fire on the target with a 50% chance of hitting.

And incredibly, manages to hit. Not enough to kill it outright though.

Sq. Wolf moves up to assist, but misses.

(As usual, the Commander giving the orders entirely forgot who was carrying a shotgun until the weapon was fired from way too far away. Oops.)

On the next turn, Rk. Syl moves in closer, getting a more advantageous 70% to hit, due to being at closer range and having an angle that’s closer to flanking the target.

It’s a critical hit for 4 points of damage! Splattering bits of alien all over the restaurant’s once clean tiles.

The other alien thinks the better of staying around and books it out of the restaurant and into the nearby alley, where it is later chased down and shot by Rk. Syl in subsequent turns.

In the meantime, Rk. Mojo has been steadily moving up around the back of the two buildings.

The alien device used for abductions is in sight.

Shortly after, the team disturbs the next group of aliens from… whatever they were doing.

While the aliens run out of sight and take cover inside the building, the rest of the team (minus Rk. Syl dealing with the previous alien in the other alley) moves up to support each other, also remaining within cover.

Strange purple energies are seen glowing from the builder’s brick walls as the aliens do some manner of unfathomable mind linkage with each other.

It’s finally time for the shotgunner, Sq. Wolf, to make the first assault into the building. Taking a deep breath, we take an educated guess via the glow as to where the linked alien is and select a position that will successfully flank it…

…only to curse as Sq. Wolf smashes through the door to surprise a second pair of aliens…

…who also scramble for cover.

The final situation, Jeromai Wolf, in the middle of three aliens and one more out of sight. *gulp* 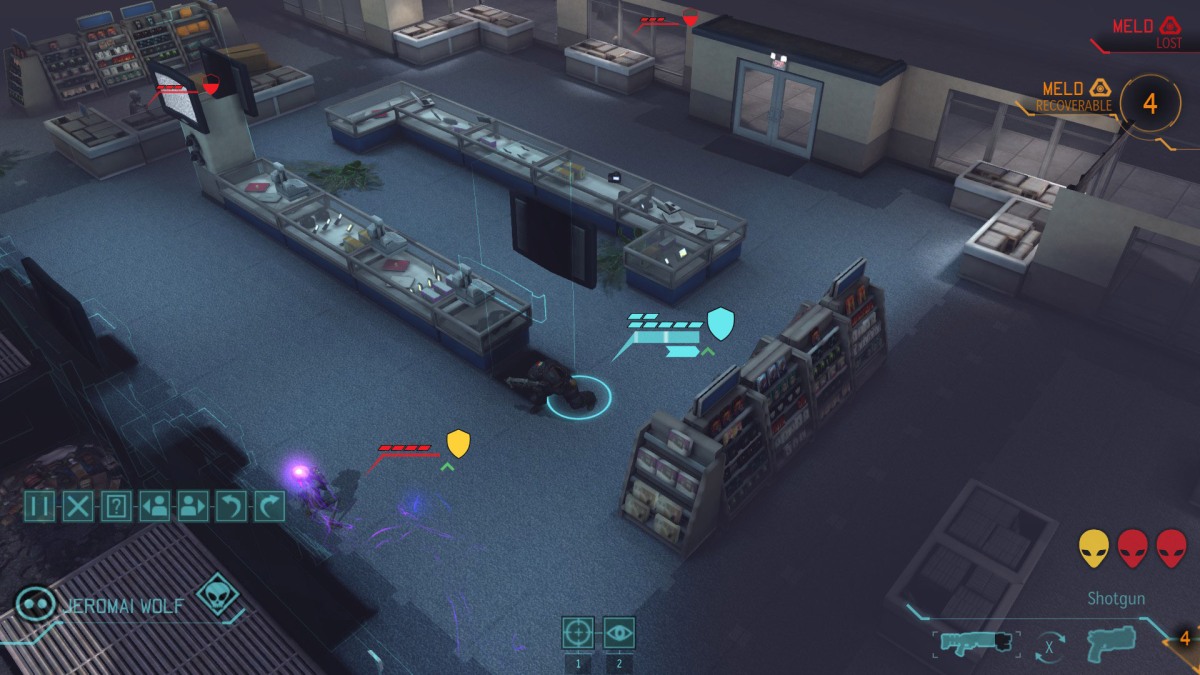 On the bright side, we -did- successfully flank the alien we wanted. (As highlighted in yellow, indicating a much higher chance to hit.)

At this close range, with a shotgun, we’re talking about a 95% chance to hit and 70% chance to do critical damage.

Sq. Wolf blows alien guts all over the CD albums with a 6 damage critical. Scratch one linked alien. (They get a health buff from 3 to 4 from their Mind Meld skill.)

Rk. Mojo is in a good position to get up close and personal with one of them.

The door slams open, she rushes through, and from a super-close vantage point giving a 78% chance to hit, riddles it through with bullets for 2 damage.

It’s still alive, but we can fix that. 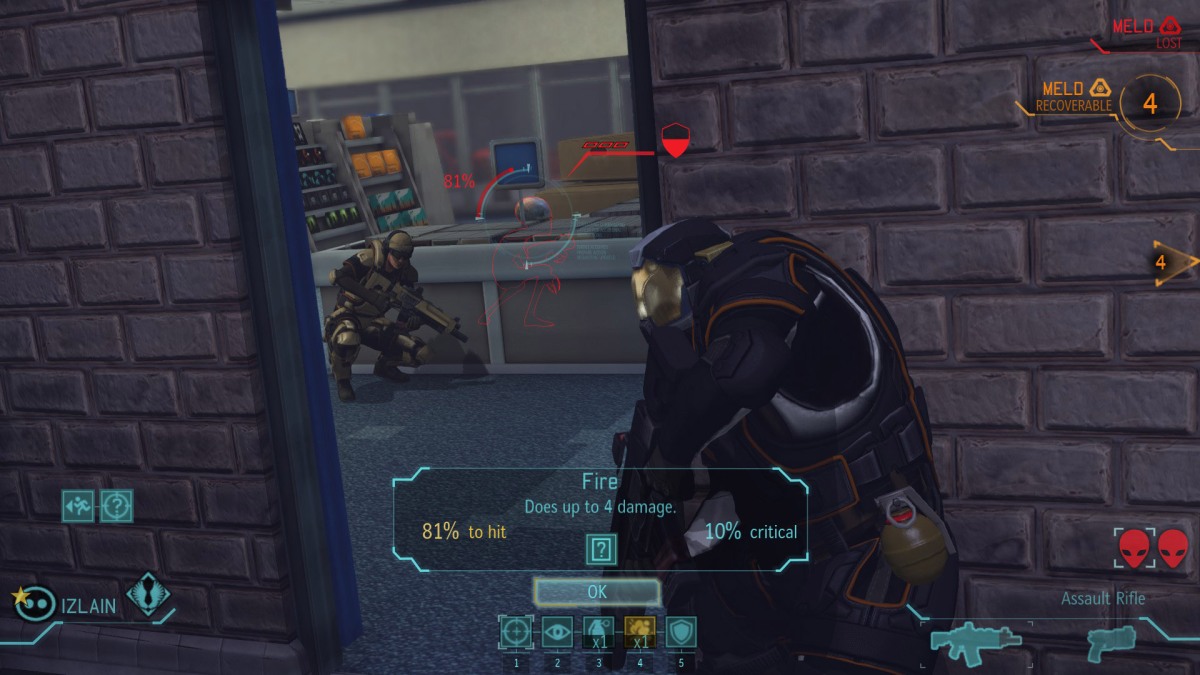 Sq. Izlain casually leans in through the doorway, and executes it.

Unfortunately, there’s two of them still alive and they retaliate. 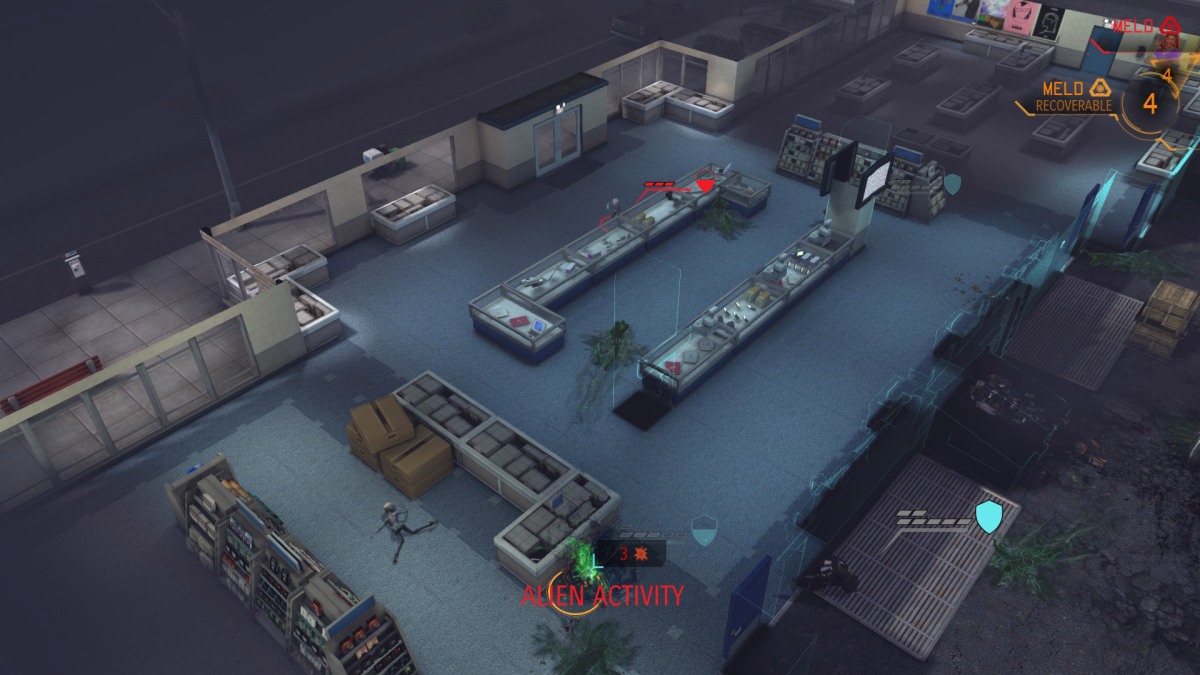 Missy Mojo is covered with 3 bars worth of plasma burns from the alien hiding behind the display cases that merely contain mundane technological gadgets. Its plasma pistol is far more advanced.

The alien that originated the mind meld is hiding in the corner way over there and has Sq. Jeromai Wolf flanked. It shoots him in the backside for 2 damage. (Ow.)

Even more annoying, it sends him into a panicked state. Ignoring any orders from the Commander on high, he decides of his own accord to duck and cover in between two display cases.

Cool as a cucumber, Sq. Izlain waltzes up to the pillar where he takes aim, having an 80% chance to hit…

…and critical hits the alien for 6 damage. Tango down.

In the meantime, Rk. Syl has finally managed to rejoin the rest of the squad after the little diversion taking care of the alien who ran off.

Though she’s coming up on the alien from another direction, the alien is behind hard cover and there’s only a 30% chance to hit with an assault rifle.

She is, however, carrying a frag grenade.

Which coincidentally can do 3 points of damage and affect everything in its area of effect.

Rookie Syl earns a promotion to Squaddie with that kill, ending the mission with a bang. That was the last alien on site. 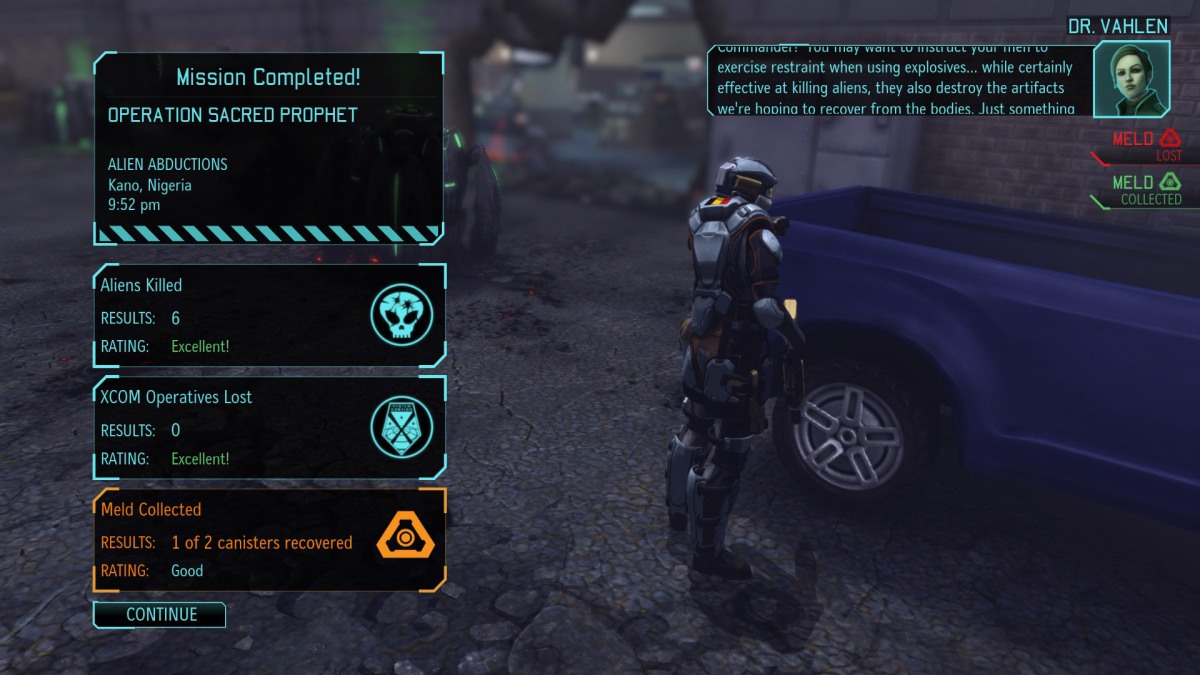 1 of 2 canisters of a nano-substance called Meld were recovered.

Scientists and engineers are still working on analyzing its properties, but initial reports suggest that it may eventually be possible to create genetically modified augmented soldiers or cybernetic warriors linked to combat armor chassis using Meld.

The after action report. Rk. Syl has been promoted to Squaddie and assigned an Assault class.

Wounds will take Rk. Mojo out of action for a week, and Sq. Wolf is down for the count for 9 days. (Sheesh. Where the hell did that alien hit him?)

So, thus ends the first battle of my new XCOM campaign. 🙂

I’m playing on Normal difficulty this time around, up from Easy, so I fully expect some casualties will happen down the road.

I also decided to turn on Ironman mode, which means one save file, period. No save scumming, no take-backs. If I screw up, well, the mistake will be baked in, probably as part of someone’s tombstone. :p

I tweaked a bunch of settings to be different from the vanilla game this time around, turning on some options from the Second Wave DLC.

Not Created Equally and Hidden Potential are on, meaning that each soldier starts with different stats and stats will increase randomly when they’re promoted. I thought this might increase the realism factor a little, some soldiers may have better Aim than others, while others will have higher Will scores (important for resisting and using Psionics later in the game.)

Aiming Angles from the Enemy Within expansion is also on: “Units receive an aim bonus the closer to flanking an enemy they are.” Which I like, as it seems to reward taking the trouble to perform flanking movements.

There is, by the way, no way I could figure out to customise which countries the soldiers come from, though you can name them and do a heck load of customisation of their looks and armor. So as much as I would have loved to change the flags to more closely represent the origins of several bloggers, after a while of struggling, I gave up. I don’t have unlimited money to keep hiring soldiers looking for the right nationalities… 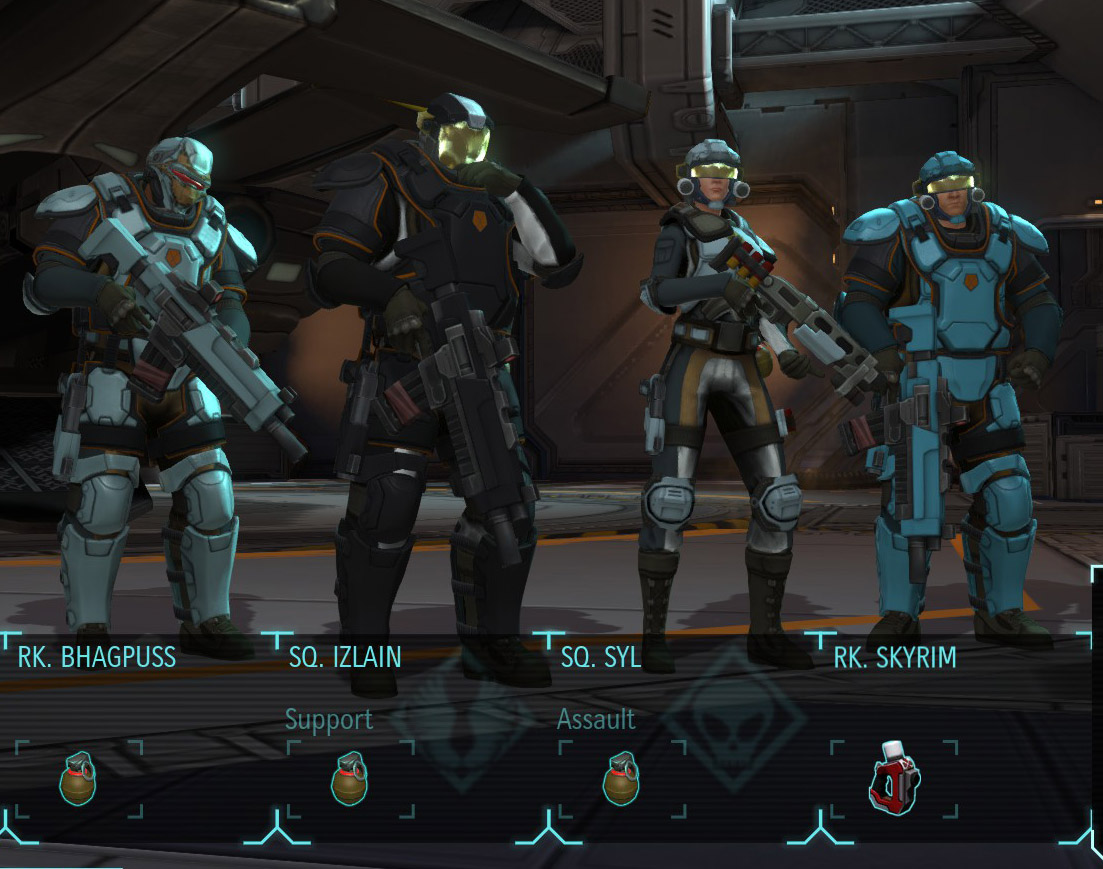