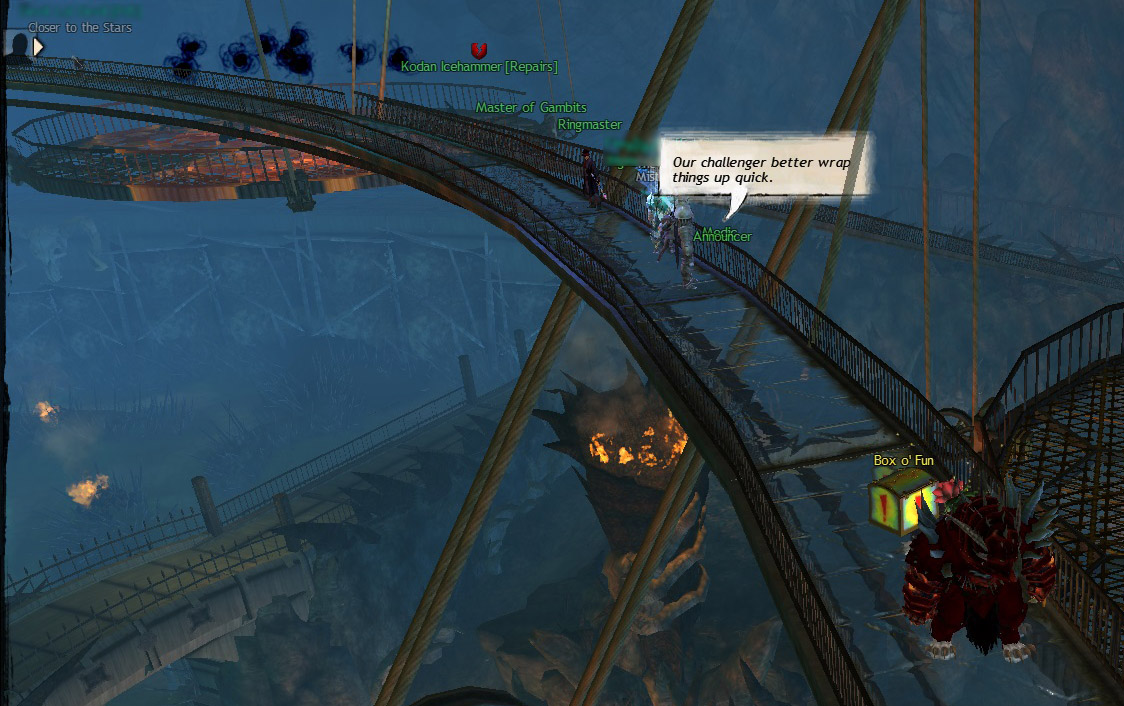 Stayed up for the patch.

…with one tiny stopover to experience the story instance first, because I’m a sucker for narrative and getting properly situated in game lore…

…with the initial fistful of Queen’s Gauntlet tickets, hoping to beat the queue which might naturally get distracted by the shiny skins, story instance, Labyrinthine Cliffs and wannabe boss zerging below.

Got a cage with one other person thinking the same thing.

(though I still managed some awkward ones on a sylvari necro later.)

The NPC medic, which revived you, so no waypoint fee and bloodboiling frustrated running back between tries

No repair fee, from the prior patch.

BEAUTIFULLY clear orange AoE indicators, making it a lot clearer where Shadowfall was going to land, so the fight felt a lot fairer from the get go.

Jumped in the first time, thinking, man, I’m screwed, I didn’t read my own phase 1 guide from the last time, I’ve forgotten her patterns and where exactly to run, it’s going to take a while to figure out all over again.

Was shocked to make it to phase 2 running purely blind, based on reflexes alone, being in bad positions about 50% of the time (screaming my head off and relying on dodge invincibility frame or renewed focus to scrape by) and got her to about half her health before all my poor timing finally caught up with me and whittled me down out of health and endurance and cooldowns.

Huh. Felt a lot easier than last time, I thought.

Gave it another two tries, which came fairly close, though I was starting to train myself to adopt the more optimal positioning in relation to the patterns again from old memories of yesteryear…

I had to exit the map to pick up more tickets saved from last year from the bank, and also swapped characters to a condi necro because I was curious as to how it would go.

…then the weird shit started.

Occasionally dying from Visions that didn’t even seem to be close at all.

One or two cases of what felt like extreme lag and dropped frames, causing the whole entourage of Liadris to turn up a lot closer than expected

(yes, taking into consideration her teleporting – the point was not even seeing her teleport, and the visions stuttered in like they were flicker-stepping in too)

The zerg was in my map, trying out the boss blitz.

Spent another 30 tickets or so ramming my head against the problem, lucking in one attempt that had her almost dead before something happened… unknown, the floor fell out, but the announcer had only spoken the first time running out line, there didn’t -seem- be a vision near me…

…I can only conclude that a vision perhaps spawned on top of me and I didn’t see it with my low FPS before being returned.

It was nearly 5am local time (or evening North American time) and I decided that each attempt was getting worse and worse.

Either possible sleep deprivation, the oncoming NA zerg thronging the Pavilion or both.

Went for a nap.

Woke up mid morning. (Had a day off today, so no work.)

Got back into the Crown Pavilion.

Noted that the zerg had died down to some 30-40 odd individuals in my particular map – generally wiping on a boss after having killed 2.

Picked a cage away from the boss they were fighting.

Killed Liadri on the second go.

Then I joined TTS doing a 6 group version (10ish people per boss, simultaneous kill) of the boss blitz for the next two hours.

The selfish part of me that wants a clear gauntlet run is telling me to propagate the message that is being spread on Reddit.

Crown Pavilion isn’t a zerg farm fest anymore! No more Monty Haul loot! Oh noes. Don’t come in to zerg it up, it’s an awful waste of your time! You get no T6 mats. You get no XP, so it’s pointless bringing in your low levels. EOTM karma train is where it’s at! Please spare my toaster all those FPS drops! Kthxbai! 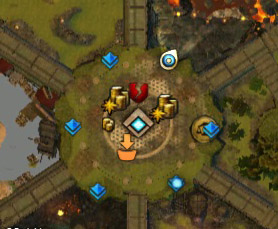 On the other hand, if you achieve this level of pretty – and I do seem to recall quite a number of people wanting interesting 10-man group boss fight content, and quite a few megaguilds or server communities who could field this number of players, not to mention the eventual wising up and learning of the playerbase:

The six bosses are fairly entertaining in their mechanics.

There’s enough people around to rez a downed player if individual mistakes happen, and a waypoint if things really go wrong.

It is quite doable to finish within the 7 minute time limit – though the issue is coordination and communication, of knowing when to stop DPS and start killing in sync when all groups are ready.

Honestly, I can’t fault this new turn of events.

It’s even in the interests of those playing the Queen’s Gauntlet to NOT have the unwashed masses piling it up in a group of 50 under some unfortunate person’s cage.

A group of 10 underneath shouldn’t create as many issues.

It goes back to the original intent of the design, which -was- zerg splitting, with all the anti-zerg mechanics given to the mobs, except the zerg outsmarted the designers the first time around.

It’s nice to have a little playground for coordinated groups – and it’s temporary content, doesn’t give anything special that you can’t get elsewhere so no elitism issues…

…but hey, you get the fun of playing in a coordinated team, fighting not-too-hard but not-too-easy bosses, and can rack up a lot of festival tokens, gauntlet tickets and champion bags quite fast. Very fast, even. Together.

Folks who don’t want to or have the time to play together, there’s Frostgorge, Cursed Shore, EOTM to choo choo around for champion bags too. The only tradeoff is no festival tokens, and no chance at Festival Favors for the seasonal vanity stuff.

Soloists who want those Festival things, there’s Labyrinthine Cliffs to play at leisure (and small groups can do this too – I see mesmer portals being popular and casual guild events doing the half hour event pop ups as being -very- very fun and cooperative and friendly) and the Gauntlet – which is a lot less agonizing without said 50 man zerg under you.

Those who have a more competitive streak might be happier with Aspect Arena and Sanctum Sprint.

Everybody has viable options. Everybody wins.

(Except those hoping to spam 1 and get rich. Don’t worry. Anet will screw it up at some point and there will be another farm fest again.)

12 thoughts on “GW2: Early Days in the Crown Pavilion”