Just a quick reference guide to the AoE attack patterns that one might face in phase 2 of the Twisted Marionette Boss fight.

(Disclaimer: Diagrams are not 100% accurate, but hopefully illustrates the idea.)

They should hopefully give an idea of where the danger zones and safe spots are, and help with your situational decisions per fight.

Marionette will stomp in sequence from first platform to the last, producing each orange circle in sequence.

Keep an eye out for her leg stomping on other platforms to predict when she’ll step on yours and prepare to dodge.

Suggested strategy: Dodge if/when the orange circle appears over you. Person with aggro faces mob away from the others. Others attack from the back.

In case of stubborn pets pinning the warden against the edge, check if the sides can be hit still. 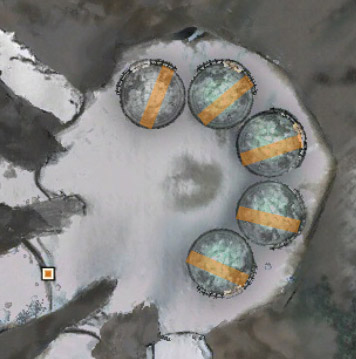 Marionette will attack a small rectangular strip that is almost dead center, but slightly nearer one side of the platform.

Suggested strategy: Kite warden into mines. (ie. Keep a mine between you and the warden.) Attack when it is stunned by mines and vulnerable. Stay in safe areas or dodge when the strip appears and you happen to be in it.

Update: You can thank a failed overflow for this one. And my great platform who rezzed each other and finished the kill fast, plus the platform that didn’t – prolonging the fight long enough for me to document a hint of a pattern.

Marionette will start from the last platform and strike each platform one by one with an outstretched hand throwing green lightning as circular patches of AoE.

Use that like the leg in chain 1 to predict when the AoE will reach your platform. (Which is still easier said than done when there’s close-range bombs to watch for, but yeah…)

The placement of circular AoEs still seems a little different for each circuit of the arm, and since you can’t predict which platform you’ll turn up on, assume it to be random for now.

Another layout in the sample screenshot below:

See image at the top of the guide for yet one more layout.

Twisted warden produces bombs that do not have an AoE marker.

Bombs go boom after a few seconds. Stay away from the bombs.

Much easier said than done, I know. Plenty of room for unlucky things to happen in this fight, including loadscreening into bombs.

Rez downed teammates wherever possible. Having a rez skill slotted might help.

Marionette will do a sweeping sword attack that arcs around all the platforms, covering a good part of each arena.

The warden has three kinds of attacks:

It will do a cone shriek towards the player with aggro. Dodge away or receive stacks of confusion. Auto-attacking with confusion is bad. (Click away from any valid targets to detarget / turn off autoattack / holster weapon are all ways to stop attacking when confused.)

Note the shriek does not reach the edges of the platform.

Warden produces a patch of circular AoEs in the center. (Diagram is approximate, I didn’t -actually- count how many AoEs there are.)

When the warning marker disappears, they leave behind a black patch that causes torment. Moving with torment causes double damage. Be able to condition clear.

Warden will produce a circular ring of AoEs on the outermost perimeter of the platform, leaving behind the same black patches that cause torment.

There is a small safe zone in between the two AoEs, approximately 3/4 of the way from the center, nearer to the edge.

Suggested strategy: Ranged dps. Keep near the edges of the platform, moving and dodging as required to avoid AoEs and the cone shriek. Melee only if you’re pro.

Have condition clears. Don’t run around wildly with torment on or attack blindly with confusion on to avoid taking extra damage.

For achievement, what worked for me was staying in the safe spot at the power generator and ranged dps’ing. The cone shriek should not be able to reach you. You avoid the center aoe and only have to worry about the outer aoe (or just eat the torment and stay still.)

Marionette produces patches of small circular AoEs that will essentially cover the above areas of the platform, with gaps in between. The area near the power generator appears to be safe.

Suggested strategy: Stack on the power generator and DPS down the multiplying warden(s) with melee cleaves/AoEs.

A big thank you to my references:

Knigaesera’s video of the cutscenes and each of the champion phases is great for seeing an example fight in motion.

Dulfy’s guide to the Twisted Marionette is, of course, a good foundation to start with.

GenocideOPS has another comprehensive one stickied on the GW2 forums.

Shortlinks to this guide:

4 thoughts on “GW2: Visual Guide to the Twisted Marionette’s AoEs”