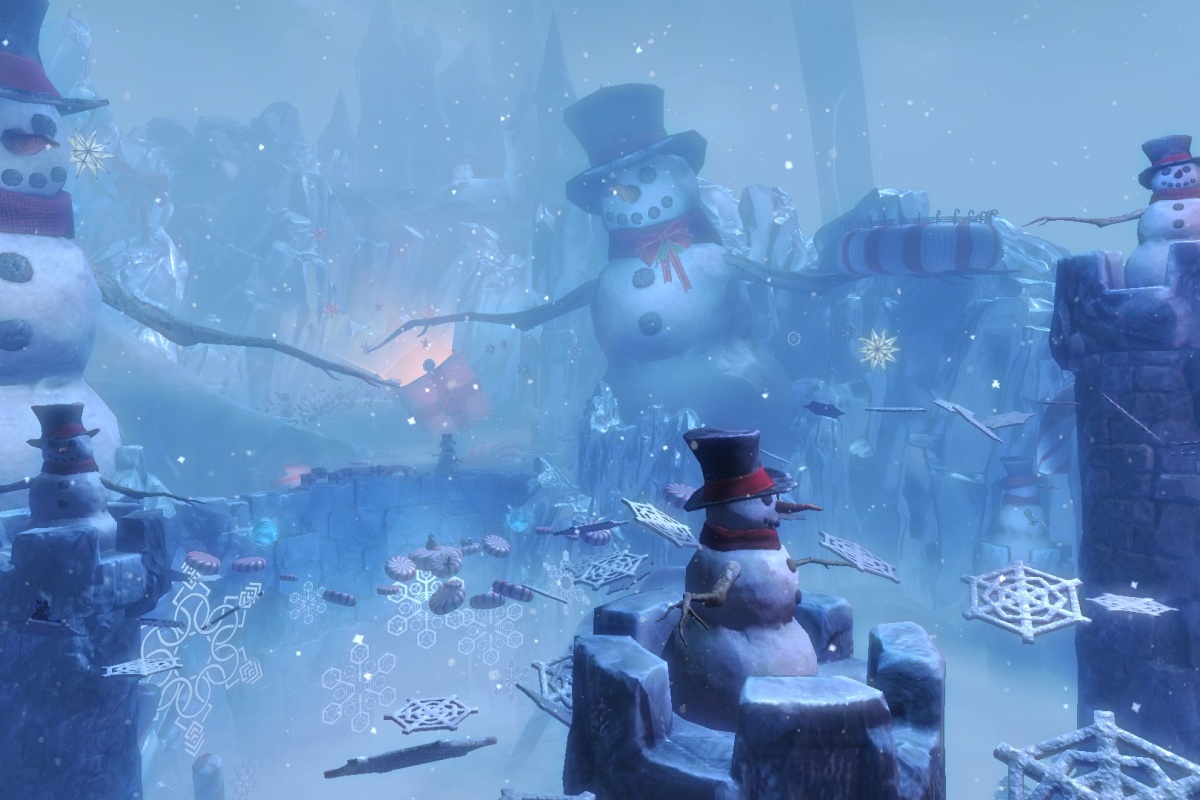 With Ascended Armor and multiple balance changes hitting us in the Dec 10 patch, not to mention two Living Story tabs of achievements, you might be forgiven for thinking that I’d go into some sort of OCD panic.

On the contrary, I feel rather relaxed and happy.

I’m sure the primary reason for this is the Living World 2013: Year in Review post, where we learn that:

a) The anticipated earthshaking story arc finale won’t hit us in December after all, but undergo at least one more month of polish and development time

Yep, no Scarlet as the Grinch during Wintersday!\o/

Furthermore, more polish on the updates can only be a good thing.

The storytelling of Queen’s Jubilee and Tower of Nightmares wasn’t -too- bad, for example, when they appeared to have time to lovingly polish stuff up, while the hack job of the Thaumanova story mode needs to be taken out the back and shot.

(If you actually do the fractal proper, there’s only Dessa’s voice for example, rather than an incoherent and unrecognizable chorus of altered speech.)

At least -try- to do the damn finale justice, eh?

It would be a terrible letdown after stringing us along for a year if another hack job was done on the storytelling and narration.

The character snippets and knowledge-dropping in The Nightmare is Over aftermath aren’t too shabby though:

Also, I guess that means we have at very least three weeks and possibly up to six weeks to frolic in the Wintersday snow and deal with the aftermath of the tower collapse in Kessex Hills.

Which is a tremendously freeing thought.

The smorgasbord of activities that I could be doing in Guild Wars 2 has increased (Nightmare living story? Wintersday activities? Fractals? Dungeons? Tequatl? WvW? Work on an Ascended something? Experiment with new builds? Earn gold towards a gem shop luxury? Craft? Gather? Farm? Level a new character? Actually PvP for gold and rank?) but the time pressure has not correspondingly ramped up.

This is how I like my MMOs. Full of lateral progression options, so I won’t get bored of doing the same old one thing to death, but with stuff to do and no obligation to rush.

Oh, I’m sure certain hardcore fractal and WvW types are all about trying to eke out that tiny stat gain of advantage over others, and they might be feeling the pressure of all those slots to fill with Ascended stuff, but well, if that’s how they like to play the game, all power to them.

As long as it doesn’t become -necessary- for everyone else to do the same just to play the game. (I don’t think the culture will progress that far that fast, not until at least one more year has gone by.)

In fact, I’d say that where fractals and agony resistance is concerned – something I personally hate the concept of, incrementing a tiny stat that limits how high you can go – the addition of more slots has increased the options for how to get sufficient AR. Versatile simple infusions are cheap and go anywhere.

Fractal level being account bound finally allowed me to take my dungeon warrior into level 18+ fractals where my first badly built guardian bogged down. I finally crossed into the level 20 level range, where infusing rings for cheap and adding on further AR via all those +1 AR infusions that drop out of every fractal end chest was now another viable option.

I suppose I will get Ascended armor at some point, but probably later than sooner. I’m more of a fan of being flexible with multiple sets of exotic armor than pigeonholed into one role and build. But zerker heavy couldn’t hurt, given how many heavy armor classes I play.

To my surprise though, one month of salvaging nearly everything in my inventory in the search for magic find has granted sufficient gossamer and orichalcum to get my armorsmith up to 500 without -too- much expenditure.

I am now also sitting on strange stats like a set of Asssassin’s, Giver’s, and Celestial armor because I had extra T6 mats for those. I suppose since I have them now, it might be fun to experiment with them for a while to feel the stat differences firsthand. They can be salvaged later for dark matter, it’s not like they’re worth anything on the TP at the moment. Now just to figure out if I should try them out on a guardian or a warrior…

Whatever. These are month long goals. They don’t have to be rushed by tomorrow, or before the fortnight is out.

(I have a sob story about 11 days of fractals – some days double or triple runs – with no volcanic fractal to complete the Fractured Living Story tab. Only on the 12th day was RNG kind to me…)