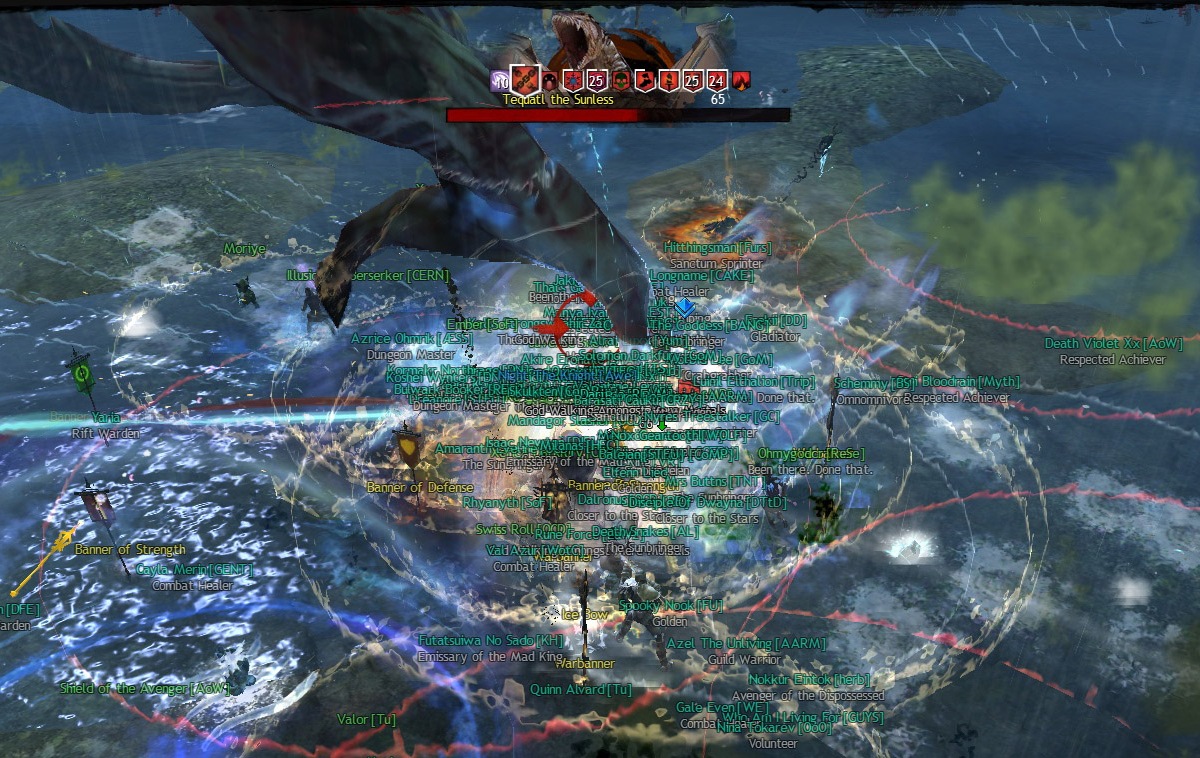 It’s the beginning of the end for Teakettle – for certain timezones at least.

Three days ago, I logged on at around Aussie peak hour (their 7.30-8.30pm) and the gathered crowd at Tequatl under the command of previously mentioned guildie managed to bring him down to 1-2% health.

A day or two before that, according to him, he had achieved 3 kills in a row.

One day ago, I logged in to find myself in Sparkfly main without having to beg for anyone to pull me over. In fact, on casing the area, there only looked to be 50 people hanging around the vicinity, with said guildie exhorting map chat that the zerg just needed to “stack better” next time, doing his best to lead a raid map full of irregulars.

Today I popped in an hour later to find barely 20-30 people chilling around the south turrets. Fish heads were up, which suggested no successes in the Teq before I came on. 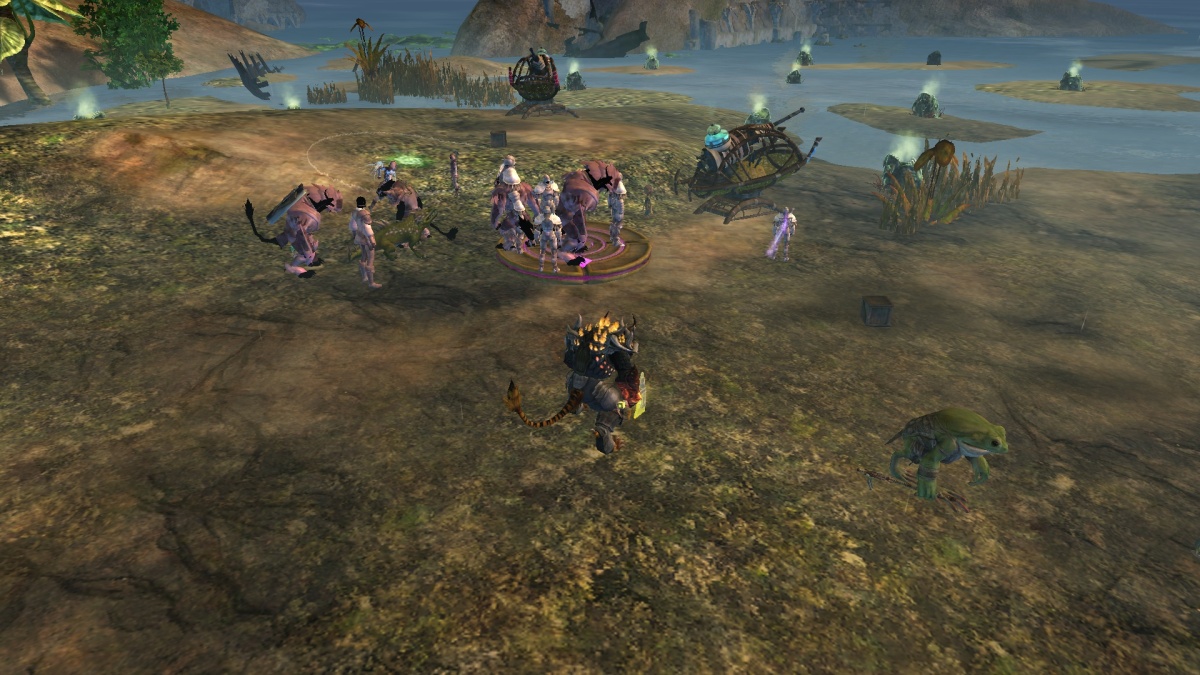 For me, at least, the stress is over. I finished all the achievements a couple days ago. And I can only assume that others have been doing the same over the past couple of days.

The good news is that I do still see some Sunbringer titles running around in the Tequatl zerg, so a couple people are still hooked to either the idea of the fight, the socialization or the very rare chest goodies.

But the first rumblings have begun.

My next hope is when the Asian primetime crosses over into Euro primetime – around my midnight to 1am. This is also noon to 1pm for NA East Coast and morning for NA West Coast.

A couple days ago at this time, a whole bunch of people (not a few from well known WvW guilds) had showed up and Tequatl had been knocked over like clockwork with 4min 30seconds left on the timer.

Yesterday at this time, I logged right into Sparkfly actual, no pulling needed.

Well, granted, map chat revealed there had been a Tequatl some seven minutes earlier, so people could have logged out right after. But the fish heads were still in place (meaning failure).

Fortunately, as it got closer to the time, it did hit overflow and I had to pull some guildies via party, but it never did hard cap either.

The crowd at Tequatl significantly improved as the day went on, fluctuating closer and closer to a successful kill. Just past reset, the zone hard capped and Tequatl was zerged down with extreme prejudice.

In fact, there wasn’t much finesse to the first kill. There was however an excellent charismatic commander on Mumble and easily 75 people in the DPS zerg at Tequatl’s foot. 10-15 tended to go down with each strong attack, necessitating a bunch of warbanners and mass rezzes, but the commander managed morale like he was building a cult – with the result of a very tight stack and many people basically kamikaze melee rushing Teq’s big toe, with a stream of reinforcements flooding in from the northern waypoint.

Dulfy showing up might have also helped the whole cult of personality along.

The second kill cut it very close, with barely 10 seconds left on the timer.

I missed the third attempt, having logged out for breakfast, and got back in time to log in unaided into Sparkfly main. Someone was lamenting overrun turrets in Mumble, and fish heads were strewn  about the place, so that was that. I decided to get my daily done rather than hang around the swamp any longer.

There may or may not have been further successful attempts that night, but I’m sure the crowd would have dwindled by the time Hawaii crossed midnight.

What does this mean for Tequatl and the Tarnished Coast?

I’m not sure. I’m going to try and spend another day observing to see if the Euro primetime kill pattern holds. If so, there’s at least hope for Asians and insomniacal Oceanics by staying up till midnight-2am, because there sure isn’t going to be one during our primetime unless a large organized guild moves in to schedule something.

My Singaporean time guild -might- be able to generate enough numbers to lead if all who show up for guild missions decide that a Tequatl attempt is something they want to do, but as it’s mostly a core of dedicated WvWers with a more casual off-and-on-again PvE cohort enjoying the socializing mass numbers provides, sufficient PvE raid interest is unlikely.

If the Euro night / NA daytime kill fails to garner sufficient interest after a while, I suspect what will end up happening is a daily Tequatl kill right after reset.

I -am- confident that Tarnished Coast contains enough individuals who will still remain interested in one Teq kill a day to more or less fill the zone (especially if bolstered by guests.)

We may see some attempts at cross-server organized raid guilds, who will schedule regular Teq kills. I understand that the EU servers have produced a fairly elitist one already, and that the NA servers have a sprawling three guild one. (Except I hear they’ve scheduled theirs at 5pm server reset time, so that’s not very much different from a server effort at that time too, right?)

Functional guilds have the advantage of ensuring that everyone who turns up is interested, committed and focused on the purpose of bringing down Teq. They offer organization, coordination and a raid-minded leadership. They will certainly require a voice program to listen in, even if they don’t necessitate owning a mic. (And if the mechanics of future raid mobs become any more complicated and require immediate feedback from each player, rest assured this will become a requirement.)

But the question of membership attrition through time and lack of interest (especially as more people get what they want out of the chests) may still eventually hold these guilds hostage to critical mass.