Over the past couple days, I’ve been watching the stats on my quick reference bauble guides with a good amount of curious interest.

This is all very informally speaking, since the sample size is pretty small, but I found a number of things fairly intriguing nonetheless.

Interest in grinding baubles via dig and bomb locations in the SAB took a steep dive after Sep 18, when the Tequatl patch dropped. Which matches anecdotal evidence of walking into the SAB these past few days and seeing practically no one around. Nearly everyone appears to be doing their best to cram into Sparkfly Fen.

World 1 Zone 2 – The Dark Woods – appears to be the favorite for bauble farming (on normal mode, anyway.) More people appear to view just that page alone, rather than visit all three as I would have expected from the way I use it as a lazy man’s memory aid, following the link from W1-1 all the way to W2-1.

Slightly less people check the page for W1-1, which could be because it doesn’t have too many baubles to offer, or simply because there aren’t that many in what is a small zone, so it can be remembered offhand without needing to refer to a guide.

About 2/3 of the people who check the guide follow on to W1-3, which is also fairly decent in bauble yields.

What I did find shocking was the stats for W2-1. 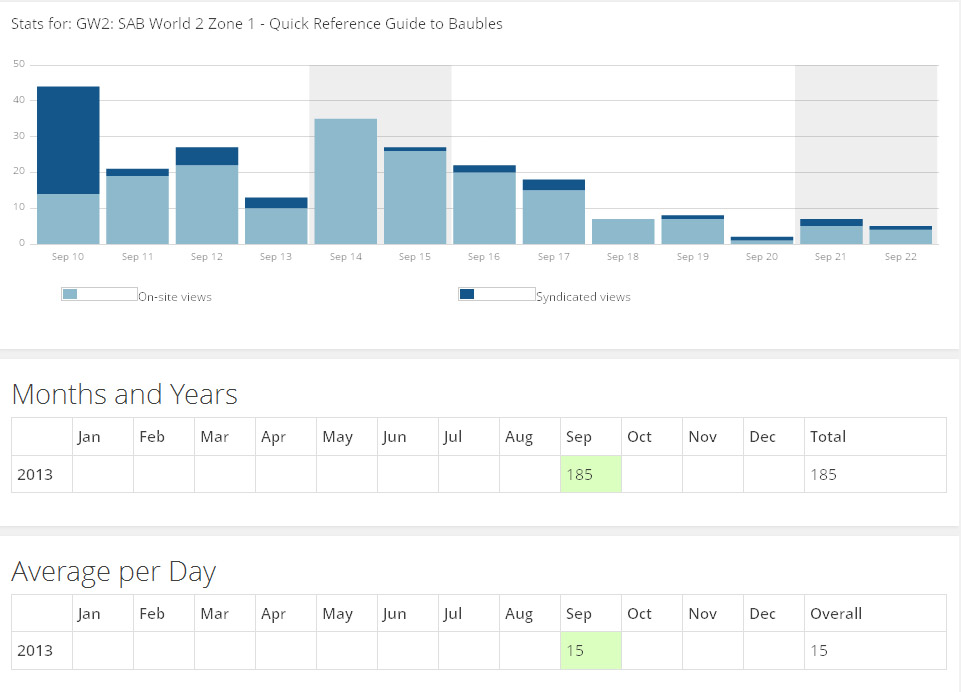 The drop is THAT noticeable.

Folks, you can easily get 500 baubles from a run through of World 2-1, plus two bauble bubbles from completion. And the rapids has not been hellish since Piranha Bend got tweaked.

If the quantity of baubles and the level of difficulty aren’t turning people away, then… what is?

My best guess is available time and the perceived size and reputation of the World 2 zones.

Some folks may simply not have enough time every night to run through four zones, and find one complete world a nice stopping point, perhaps. Or they simply run just one zone (1-2).

World 2 zones also seem very big on first glance and they might have been once bitten twice shy after having given World 2 a try when the SAB came out two weeks ago.

It almost makes me wish I could be a fly on the wall when Colin Johanson and Josh Foreman ran their datamining stats to see the real numbers frequenting the SAB… just to see if there’s any correlation between mine and theirs.

Funny, huh? I think it goes to show where the bulk of the majority interest lies. Ascended rewards, loot pinata, epic boss fights, the newest content.

The SAB now seems like a has-been – everyone hardcore must have already swept up the cosmetic rewards they wanted, finished their achievements and moved on like locusts.

Which is pretty sad, because some more quality-of-life improvements have snuck into the SAB since the Tequatl Rising patch and haven’t been talked about or highlighted as much.

Only the slowpoke loners like me who chose to give up the first few days of Camping @ Tequila (Only To Fail in Overflows) in favor of peacefully plodding through World 2 Tribulation Mode and finish the last achievements have been able to appreciate them. 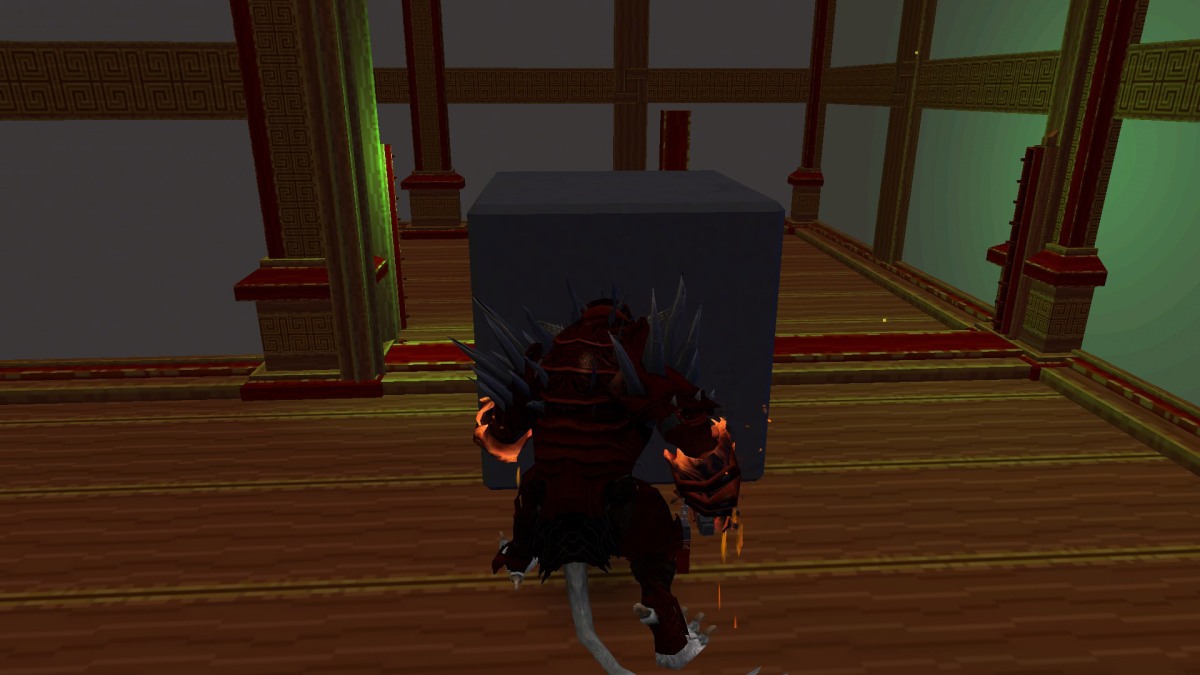 Dart traps have gotten SO MUCH FAIRER.

Instead of a barely visible extrusion covered by a checkerboard red and black smooth texture that absolutely does not suggest that anything could shoot out of it, the new upgraded dart traps do contain little tube-like protrusions that suggest projectiles.

The less visible sneaky traps are also highlighted by a green glow that significantly improves visibility, especially the evil little ones that were originally hidden between two tall grey blocks, whose only warning of their presence was when they one-shot you in the back, producing many “WTF”s.

I felt that this made the top area of the grey block puzzle a lot more palatable. (Tribulation Cloud was the main pain in the butt, which is as it should be, in terms of difficulty modes.)

Gong pagoda is still slightly annoying, but not unbearably so. I even managed the full gong run on the first try (even though I was prepared to die like Dulfy suggested and wait for the gong to hit bottom), which may have been a lucky stroke of latency and reflexes, or subconsciously helped by the dart traps being ever so slightly easier to see and thus react more appropriately to.

As for World 2 Tribulation Mode feedback, the major nuisances were the latency-sensitive areas as expected.

World 2-2’s trampoline sequence near the end with the red pillars caused a not insignificant amount of rage as I simply couldn’t get sufficient momentum bouncing on the edge and moving forward. I had to bounce in three jump sequence and move forward/twist the camera fast enough and PRAY I got enough height. Many many deaths.

(Don’t get me started on the poison waterfall and lilypads of World 1-3’s shop. I haven’t revisited it since the last patch, but that one was CRUEL to any latency whatsoever. Easily 120+ deaths before somehow getting in. If GW2 tracks player deaths in map locations, I’m sure that would have turned up like a major hotspot like a raging forest fire on a satellite map. I even deactivated virus scanning and firewalls for that, in the hope of not additionally slowing down -any- packets between me and the server beyond geographic location lag.)

World 2-3’s main trouble spot was the area with ice spikes and blowing gatekeepers where there are two bananas and a tricky path to skate/hop across with No Clouds blocking the way. Not sure if it was latency again or just lack of control over ice, but it was very easy to slide a few millimeters too far and not be able to stop in time, or end up with that oh-so-enjoyable experience of dying in mid-air when you -think- you’ve cleared the lethal obstacle but the server tells you, “NOPE” half a second later.

Eventually, persistence got me through.

I’d talk about the zone being nearly entirely dark as one of those fake difficulty schticks, but players learned how to get around that long ago. I took one look, jumped around for fun for a couple minutes with a torch to enjoy the ambience, then promptly adjusted gamma. Turnabout is fair play, after all.

The only downside of that was that I used the in-game graphics options settings for it, which can only be done in full-screen mode, and that screwed up a three-hour first attempt when I alt-tabbed out to watch how Dulfy jumped the clouds to get to the secret shops where Moto’s Finger is available.

I apparently carelessly left myself in the path of a bouncing goat, which promptly must have knocked me off, then pure chance must have left me out of lives and chucked me into the continue screen. Which then must have run itself down while I was still blissfully watching and rewinding Youtube video in complete ignorance.

I switched back to find myself in the lobby of the Super Adventure Box, rapidly gaining a mood that was distinctly NOT as bright and sunny as the surrounding environment. Went to bed completely stumped by what had happened and only put two and two together later.

The next night, I only took two hours to get back to that point, with no need to refer back to the video, so there’s something to be said for practice.

I’m also pleased to report that this slow learner has finally figured out how to dodge the Storm Wizard’s charge after reading a bunch of forum tips. Turns out my issue was being too concerned with keeping track of where the wizard was and always having the camera swiveled to keep him in view. (I have tank tendencies, situational awareness, y’know?!)

Keeping two trapeziums away and staying near the edge, reflecting his attack and then immediately swiveling to run away along the edge without ever looking back is all it took.

It was trickier trying to figure out what to do with a yellow skin. My guardians are fire-Blood Legion themed (never gonna let that fiery dragon sword go) and blue holographic-themed respectively. I was fairly happy with their look ages ago.

Eventually the warrior alt volunteered. He’s -supposed- to be Iron Legion and has blue-and-grey metal themed armor to match, but he’s been moonlighting in a Flame Legion disguise in his berserker gear. Perhaps too much so given the number of times I keep getting targeted when doing CoF path 2 during the assassin-clearing stage.

Maybe the 8-bit axe will help distinguish him a little more from the NPCs.

I overwrote a Zenith Reaver skin for that, so it’s really a “too many skins, too few characters” kind of deal.

The green greatsword is still sitting in the bank. I don’t have a real clue of what to do with it. Maybe the asura can use it at some point once I figure out what other stats I can use. I already have two greatswords in his invisible bag… (and two staffs, and a hammer, and a scepter and focus…)