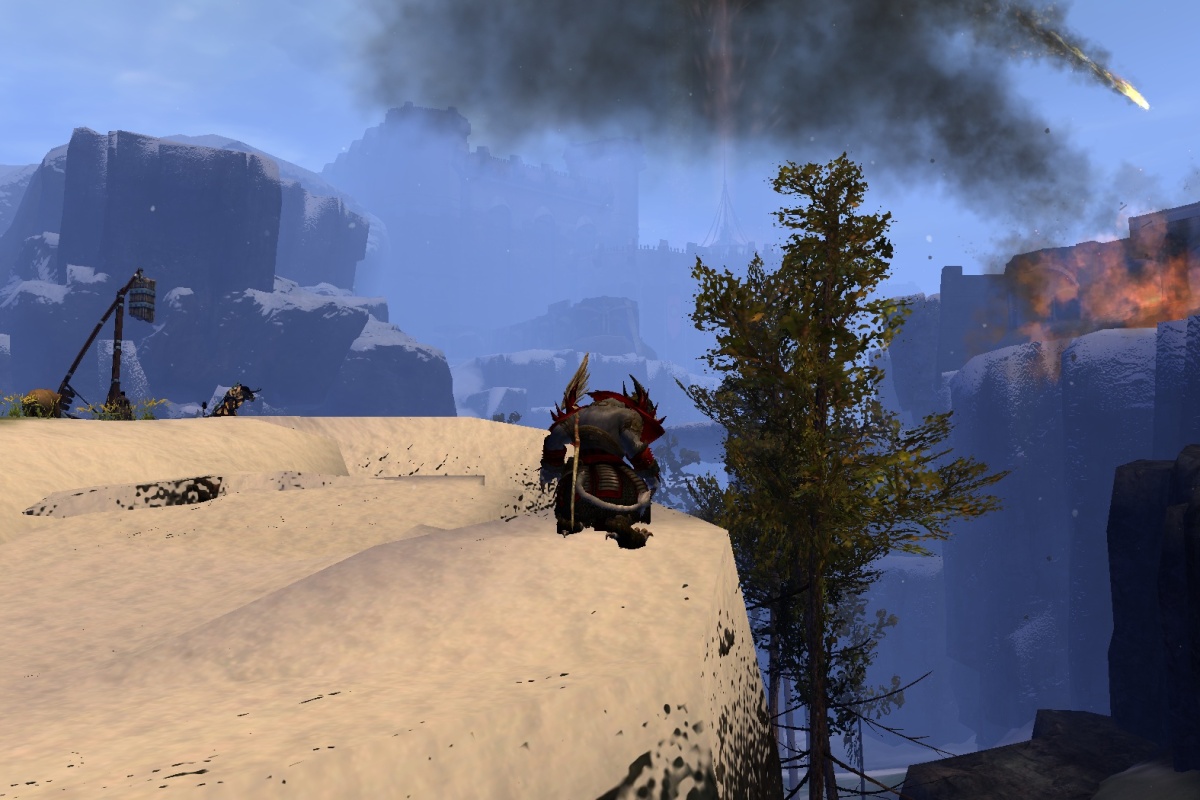 I’d love to post more this week, but I haven’t been able to even work on a GW2 alt properly.

I have a baby elementalist and necromancer waiting in the wings, a thief and a ranger awaiting their turn, a potential warrior and a mesmer demanding that I ought to buy 2 more character slots nao (only held back by the voice of reason pointing out that I haven’t even gotten anywhere with the other four yet) and the final engineer profession just sitting back and chuckling knowing his turn will come eventually.

Except I can’t log in this week without hitting ‘B’ to check the WvW scores every so often and rushing into one of the Borderlands on the level 80 Guardian.

I’m even getting more comfortable with staff fighting. It’s really quite useful for tagging a bunch of people at once, and aiming is less important when your cone is so wide. It’s not for 1 vs 1 with, I keep a sword/focus for that (unless I swap to scepter to reach up and touch cannons/boiling oil, which then makes me hopeless for any killing whatsoever.) It’s good for running with a crowd/zerg, one has swiftness, and I notice that either the staff cone visuals, or the fact that they’re getting hit, makes your opponents backpedal at least slightly.

It’s a morale/push kind of weapon – you get hit, you backpedal, your comrade next to you backpedals cos he’s getting hit too, hey, everyone on your side is backpedalling, I better retreat just a bit too. Before you know it, you’ve lost a bit of valuable ground. Useful around gates, chokepoints and shoving people off their nicely set up siege weaponry.

Just…don’t rush too far into the opposing zerg because your team probably won’t back you up. I throw up wall of reflection when retreating, which is my lame attempt to fool people into trying to hit me and getting their projectiles back in their face.  Sometimes it works, sometimes it doesn’t, but I live more often than not, so that’s successful enough in my eyes. I’m working on getting better with line of warding. I still don’t cast it often enough, but I’ve gotten it off once or twice right in the path of a retreating opponent and it is rather fun to see them run right into the line and get knocked down – then dogpiled by the pursuers. Nor am I terribly good with the orb, but I’m working on it.

Anyhow, as long as I get the number 4 skill going every time it’s off cooldown, I doubt anyone around me will complain, what’s not to like about 12 might stacks periodically?

I’m having a harder time with the utility skills. Spoiled for choice, rather. Some skirmishes, I like to bring the spirit weapon hammer and sword, for offensive purposes and being threatening in 1 vs 1 fights. They’re like ranger pets, in a way, they run into the enemy, make right nuisances of themselves, give opponents something else to target, and are disposable. Defensively, and for reviving, sanctuary is supposedly quite good. I’m not 100% sure that the big blue bubble doesn’t scream AoE me here, now! But still experimenting with it. Hold the Line is no doubt useful, and I’ve been playing with the idea of using Save Yourselves to complement pushing into a zerg. 11 second retaliation might do some nice things, assuming I can survive it.

Isle of Janthir is in a very good match up and a very good place this week, after last week’s dismal time with Eredon Terrace, where I suspect most just stopped and worked on PvE and were awaiting the reset, rather than serve as target dummies and punching bags for a very offensive unsportsman-like guild. (Some days, the only winning move is not to play.)

Thriving WvW seems to be a good place to earn karma. I bought the exotic shoulders for karma less than a week ago, I thought, and in a few days of mixed PvE and WvW, was back up to 20k karma. Two or three days after that of near full on WvW, some defending and lots of supply camp, tower and keep taking, and I’m at 55k karma. I’d go buy another piece but I’m too caught up in the excitement of the back and forth.

Server pride is strong, and I am greatly enjoying the community as a whole. We’ve got a good mix of NA and Oceanic guilds and generally, no big elitism from guilds towards/against the dirty unwashed PUG masses (of which I generally count myself as part of, even if I run around with a guild tag) and a decent united front out on the guru boards and official forums. Things could be a lot worse.

Fer instance, forums rumor is that Sea of Sorrows just imploded with some inter-guild drama or some such, so I suspect the atmosphere over there is not going to be pleasant for a while. Regardless, things have been very interesting during Oceanic hours, as IoJ and SoS have strong cohorts during that timezone and the zergs are out clashing in force.

Add on Fort Aspenwood putting up a very strong fight at practically all the hours I’ve peeked in, and despite the lead, Janthir has been facing very taxing fights on two fronts at a time, usually three (since we want to push/attack a target too.)

We’ve had a few nasty hackers make off with the orbs several times this week, and I hope ArenaNet works on that problem asap. I don’t blame the servers, I just blame the individual cheaters and hope the banhammer comes down on them with extreme prejudice.

On the whole, it’s been an enjoyable playfield. Janthir isn’t organized yet/enough to really give the big 4 any fights – our defending and attacking is still fairly haphazard and disorganized unless/until a guild or two steps in (and there’s been more of that lately, so things are looking positive there), but folks have a lot of heart and it’s a good tier to learn how to WvW in and enjoy moderately intense battles without getting arses handed to you by an organized guild of 60+ on voicecomms being professional commandos or something.

It’s an up and coming kind of place, so there’s a lot of hope for the future, and no pressure to try and keep any titles or what not, we just do our best and keep trying and keep getting better at what we do.