I met a traveller from an antique land,

Who said—“Two vast and trunkless legs of stone 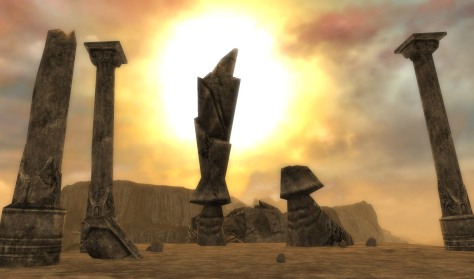 Stand in the desert. . . . Near them, on the sand,
Half sunk a shattered visage lies, whose frown,
And wrinkled lip, and sneer of cold command,

Tell that its sculptor well those passions read
Which yet survive, stamped on these lifeless things,
The hand that mocked them, and the heart that fed;

And on the pedestal, these words appear:
My name is Ozymandias, King of Kings;
Look on my Works, ye Mighty, and despair!

Nothing beside remains. Round the decay 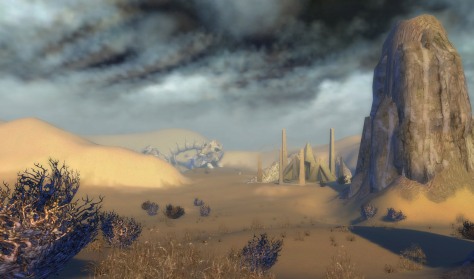 Of that colossal Wreck, boundless and bare 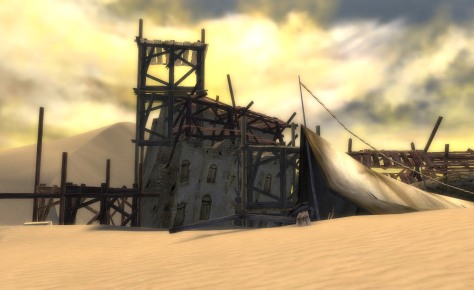 The lone and level sands stretch far away.”

All right, all right, so it’s really a female warrior statue known as The Lonely Vigil. Maybe Turai Ossa (aka the Ghostly Hero) can be Ozy.

And when you get up closer, it ostensibly falls and collapses to form a bridge, though the wiki says one never sees it actually happen. 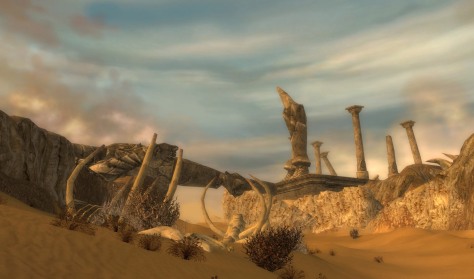 With that, the Wayfarer’s Reverie of Tyria ends. Being an opportunist, I poked my head into the Crystal Overlook to pick up the teleporter waypoint for the Elona quest too, getting fantastic screenshots along the way.

I love the Crystal Desert and the Arid Sea. Besides it being the place of Ascension, which makes it feel especially memorable, it is wide and flat and open, making loop backs and cursing and swearing less likely. And despite it being desert, there’s so much to see.

The gorgeous sky, the bones, the ancient ruins that keep calling to mind Ozymandias and wonder about this specific set of fantastical ancient peoples whose civilization has been lost to the sands, not to mention, Forgotten (pun intended.)

4 thoughts on “GW: The Lonely Vigil”