Pathmakers are one of the true minigame puzzles of Egypt. They are reminiscent of all the pipe games you’ll be able to find in various Flash-type incarnations about the web.

Ostensibly, the lore is that the pathmakers represent “aqueduct paths” in Egypt, and each dot is a “aqueduct tower” and the black lines are the “aqueduct pipes.” Whatever. It’s better as an abstraction.

The objective is simple, getting there less so. Basically, form one enclosed loop that includes all of the dots.

To quote from the ATITD wiki, the rules are as follows:

A Pathmaker puzzle is played on a two-dimensional grid. Initially, each square either contains a red tower, blue tower, or is empty.

You may place pipe segments on a square, including squares containing a tower, by clicking on the square. Clicking on a square again cycles through the possible pipe options for that square:

The object of the puzzle is to join all towers into a single closed loop, while obeying these rules:

The Pathmaker will not let you place pipes that violate these rules.

If that just made your eyes glaze over, worry not, let’s try it with a visual example.

When first starting out, I recommend finding a symmetrical puzzle. Like so, where the dots are a mirror image of each other. 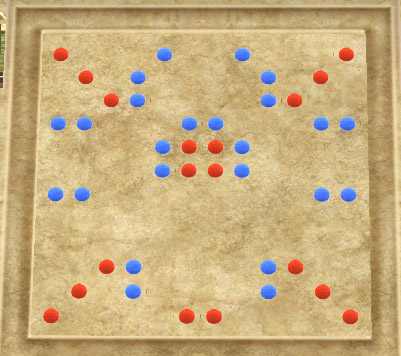 This assures you that if you just solve one half of the puzzle, you can copy the solution to the other half, and it should be easier to achieve a closed loop.

In general, the best places to start a Pathmaker are from the edges (assuming there are dots there), and from areas with clumped up dots (in this example, the center has a big clump.)

The clumps of dots and edges restrict the number of viable solutions, so you have a better chance of getting it right. Remember, the pathmaker will not allow you to place an invalid pipe.

So, starting from the edges, we see a red dot at all four corners.

Red dots MUST have a 90-degree elbow bend on them. So click on the red dot, and the only viable orientation is the one that faces inward to the puzzle.

Red dots MUST also have a straight pipe leading out both ways from the bend. So click on the adjacent two squares and extend the bend.

Right, that defines the edges of the puzzle already. (Two pipes are left out on purpose in the above picture, it’s a guide, not a walkthrough.)

The are two other red dots we are interested in, very close to our established corners. There is only one logical orientation for the other two red dots to follow. Look at the picture below. 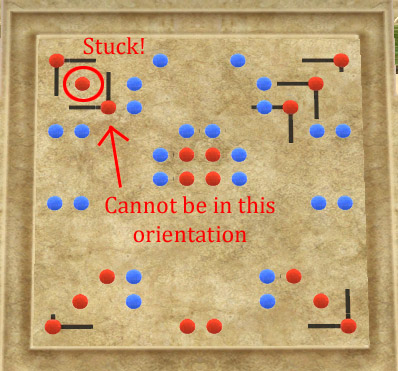 The straight pipes extending from the red dot in the corner prevent the middle dot from taking on any other orientation but the one following the corner. Ditto the subsequent red dot.  (See the top right of the puzzle.)

Even if you were to fool around with the third red dot and rotate it in another configuration, extending its bend with the straight lines will show you that you’ve now trapped the middle red dot. There’s no valid path and the pathmaker will refuse to let you place any black line there. (Top left of the puzzle.)

So logically, all four corners have the same curved-in pattern, which you can proceed to fill in.

The blue dots nearby help to confirm this. Blue dots MUST have a straight pipe passing through them.

Blue dots also MUST have at least one 90 degree elbow bend next to their straight pipe, but we’ll worry about that part later.

The other place that is good to work on here is the middle clump of dots. Four red dots in the center, frankly, only one configuration to go. Can you tell the above picture has a flaw in the bottom right red dot?

Keep clicking to rotate the pipe, to look more like this: 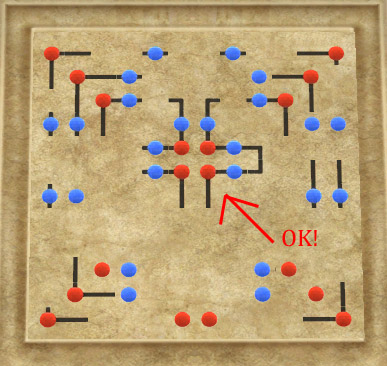 Now we can start adding the compulsory bends that need to be adjacent to the blue dots.

This starts to be more a matter of intuition and trial-and-error as there are more possibilities, but a good rule of thumb, or guideline, rather, is to try and close the loop and join the dots with the least amount of space/pipes.

Creators tend to fill up the entire grid or nearly so with a pipe pattern, so conserving space for other pipes to fit will give more room to maneuver.

From here come the small tweaks, adding and changing the pipes with no dots in them, and getting them to connect up to form a continuous enclosed loop.

Sorry, no solution picture included, wouldn’t be fair for the creator or the philosophy behind the thought tests. The idea is that it should involve -some- thought, after all. 🙂

For tougher puzzles, if a conflict occurs and the dots forbid the pipes joining up, then it’s time to backtrack a little and remove some pipes and see if the dots can be joined in another configuration.

Asymmetrical puzzles like these may take some persistence to connect.

The good news is there’s a lot of “white space” in between the dots for this one, so there’s more freedom of paths that can connect up.

This one was hell. It took a lot of “not giving up” and plugging away at it to finally achieve a solution.

There can be more than one solution to any pathmaker, as long as the dots don’t force it into one configuration. So don’t worry and just focus on making sure all the dots are linked up, and that an enclosed path forms from the linked up dots.

When you see an enclosed path, right clicking on the Pathmaker will show you the “Claim a Win” option which you can proudly use to get the game to check your solution. If it conforms to all the rules above, badabing, success! And it will let you judge and rate the puzzle.

A short trip around Egypt later to visit three ‘recognized’ Pathmakers and plugging away at them, yielded three wins and one shiny Pathmaker principles level. Relatively easy.