Woke up with a bad crick in the neck yesterday. Alternated between wandering around pissed off at the pain and lying down whenever possible to try and ease it, and got very little computer time in.

Anyway, let’s continue where we left off, 2200 Clay richer.

20 Wool Cloth was easy to soak in clay, since the stock was already sitting in my hand loom. One learns very quickly in ATITD to have extra stocks of everything to hand, else making it all from scratch becomes a righteous pain.

Fer example, Wool Cloth comes from shearing sheep – which you first need to catch roaming about Egypt, then make a sheep pen and feed them onions (which you grow) and shear them to get Wool.  The Wool is then spun into Yarn with a Distaff (see blue circle), and the Yarn output is woven into Wool Cloth on a Loom.

Another thing you may note is the amount of stuff crammed into a fairly small space. That’s just me liking to maximize the best possible use of space I can, since I’m lazy to build too many compounds. However, do anticipate that you will essentially need to have a whole bunch of little factories in the desert if one is hoping to produce anything substantial on one’s own.

It’s not terribly ‘immersive’ per se, but then any faithfulness to a realistic Egyptian setting sort of went out the window with airships and automation and steam shovels and the like. ATITD is a producer’s/crafter’s game mixed with a heavy dose of sociology (and math.)

One of the most common things newbies do is build too small. And assume they can get away with making one of everything to just try it out.

I did it too as a newbie. This was my dinky little house, and you can see even then, I already put in three distaffs because I got tired of waiting.

Unfortunately, what happens later is that you find out that economies of scale are everything in this game. Making 400 firebricks in one dinky little kiln that fires 12 at a time is an exercise in masochistic patience.

Then you realize your compound is way too small for all the extra stuff you want to put inside, and that previously putting in equipment willy nilly blocks you from expanding nicely now and it’ll have to be torn down in order to get it out of the way or you’ll have to make a new bigger compound and do it all over again, and suddenly quitting the stupid game is sounding mighty attractive right now.

Plan ahead. Plan in arrays. You don’t have to build them all there and then, but anticipate you may want more later and leave enough room for yourself to build them later.

The other thing people can do is fall in with a big guild and use their facilities. Some of them are a sight to behold, spreading to 10+ compounds, and are good examples for planning out your own compound.

If you’re like me though, communal living and sharing property and goods is nice, but having the capitalist security blanket of owning my own stuff under my control soothes my paranoia. No one can take it away until I stop paying my sub fees. Living in a group guild involves some compromise to get along with other people, working hard and contributing in some way to not look like a leecher, and any resources are never officially ‘yours’ unless you head the guild and can set ownership rights on things. And groups may come with drama – accusations of theft, of unfairness and favoritism, of someone else profiting from somebody else’s expense… It’s the old solo vs group debate in new and interesting form over property rights.

Since ATITD supports  multiple guilds though, nothing stops you from being solo, in a friends-and-family guild with their own compounds, and part of a big uber-productive monster guild (assuming you can get in and stay in) all at the same time. Find your own balance point.

The above advice is not to say you can’t build nice-looking compounds if that’s what floats your boat. Sandbox, after all. 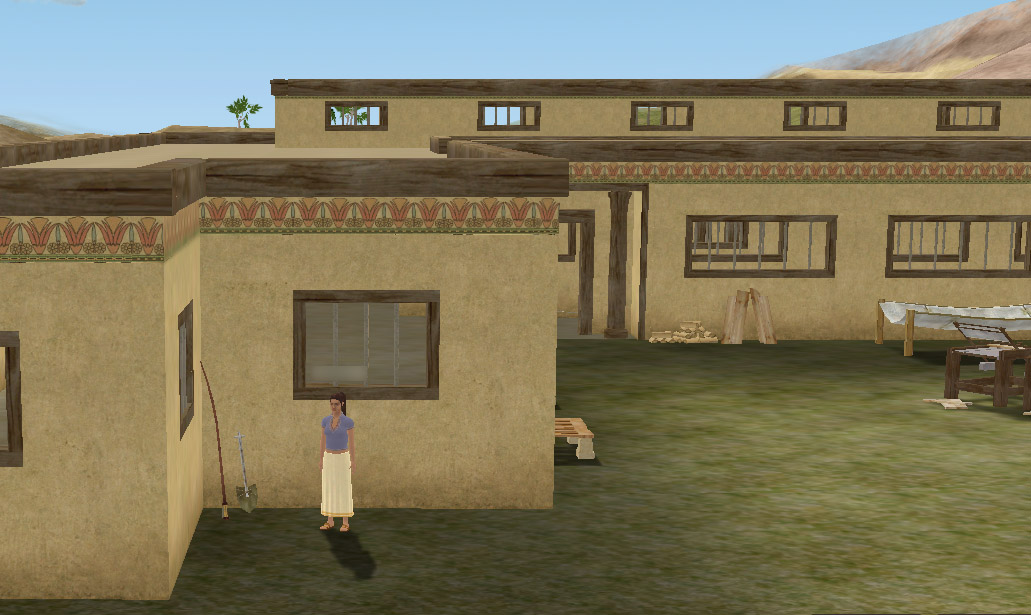 I once ran across a pretty compound way out in the boondocks where the creator had built some decorative sculptures and used them to lean tools like a spade and fishing rod and planks of wood against the walls.

If one peeked inside, one can still see quite a bit of stuff.

Personally, the compound is still a bit on the small side for me, and the owner -had- quit, so who knows if he felt it was sufficient for him?

Back to soaking Wool Cloth in clay. It’s very simple, have enough clay, enough water in jugs, click on the previously-built tub, and select the right option. 4 minutes later, the cloth is done. I have 5 tubs, so in ~16 minutes, I had my 20 Clay-Steeped Wool Cloth.  Note the room for further tub expansion which I haven’t found necessary yet. 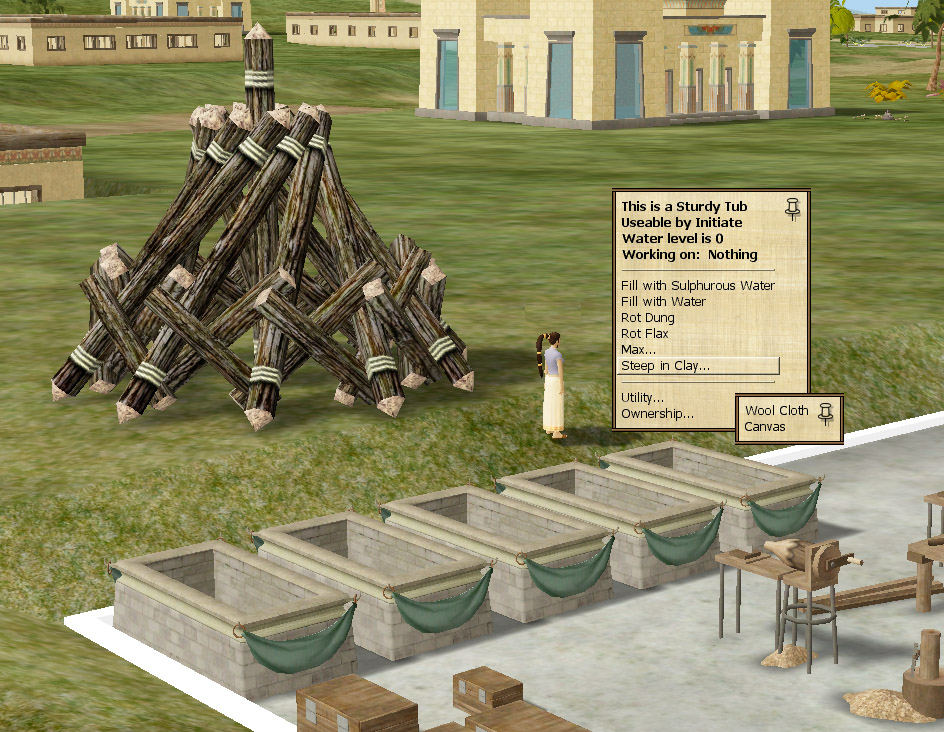 The ginormous pile of wood in the background is a Bonfire (unlit.) Folks use it to store wood as it can take a huge amount without clogging up space in chests and warehouses. And it looks awesome as an e-peen. (More on opportunities for building objects on a monumentally excessive scale in later posts, an entire subset of Tests is devoted to that.)

Brickmaking is one of my favorite activities in the game. Something about seeing the bricks pop up in the brick racks, looking like cute little white chocolates and drying and turning milk chocolatey just makes me happy. 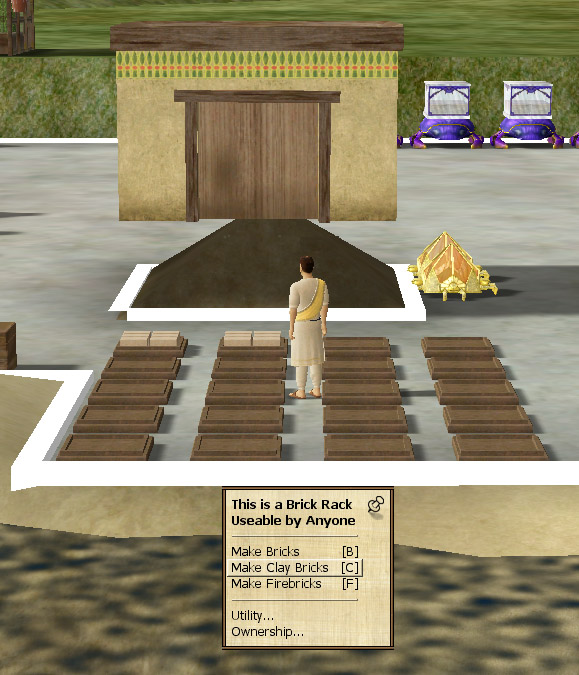 This is one of the activities where it’s much better to use the hotkeys. Click click clicking would get old real fast. The trick is to change the camera view by pressing F8 twice, also known as double-F8 view. (I have no idea what it’s really called in-game.) 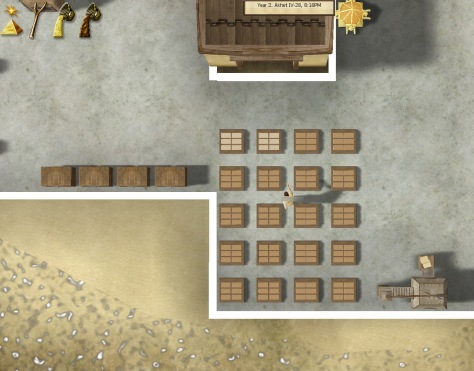 Now that the racks are in nice neat rows and columns, simply minimize chat channels to get hotkeys working, hold down the C (or B for normal bricks) key and wave the mouse cursor over the racks like you’re painting the bricks into them.

When they dry, hold down T to take the bricks and repeat.

Note the mud and sand icons in the second picture. Both are necessary materials for brick making, so it is smart to plan ahead and put your brick racks in a position where you don’t have to move to get mud and sand. That way, you can overload yourself with materials and it doesn’t matter if you can’t move until you’re done with the bricks.

Also note the nearby chests and warehouse for easy offloading of huge amounts of bricks once you’re done.

Once Improved Brick Racks are available, they don’t break and disrupt your flow. (Normal brick racks are somewhat aggravating in that one needs to have spare Boards on hand and have to keep laying them out when they break.)

3000 Wet Clay Bricks took much less time to produce than getting my hands on the clay in the first place.

Unfortunately, the Clay Bricks are still Wet, so they’re not yet entirely done. Now they need to be fired in a kiln. Or ten.

In fact, I didn’t think that I wanted to do so many rounds to finish off 3000 bricks, so I invested a little time in expanding.

Another trick people use is to put a second row of kilns behind the first, but facing away 180 degrees. In this way, one can easily scroll the camera and see if they are all loaded up. I’ve built myself into a corner with this compound as it’s hit the limit of expansion, but until now, I haven’t had the need for an excessive amount of kilns.

I might just end up building a second row in front of the first and deal with a little visual inconvenience in checking if they’re properly loaded.