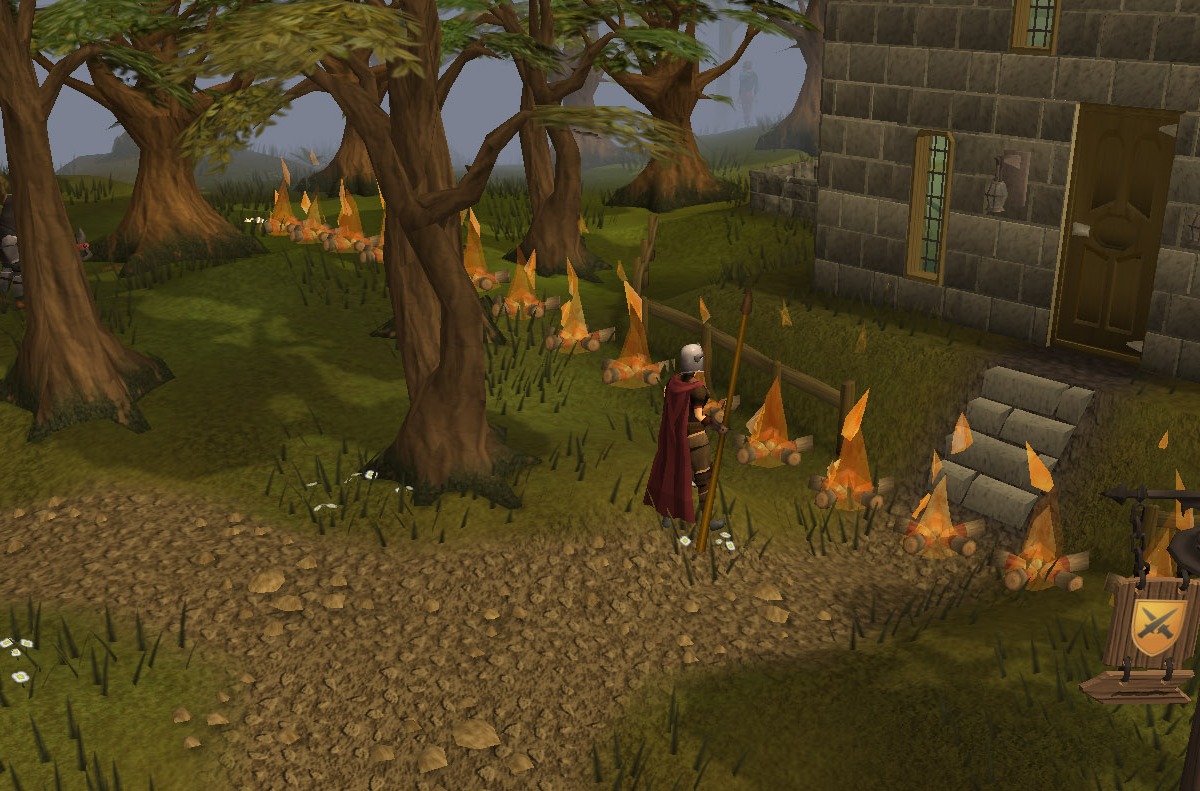 Recently, Runescape lit up my radar in a big way.

I always had the vague intention of giving it a try but never found the time till now. It was probably for the best, as I am given to understand they recently did a graphical update in the last two years (I was never really impressed with Runescape pics previously, but now they have a very decent cartoony polygonal cuteness to them) and just in February 2012, redid their new player experience.

Well, it worked. After a bloodstirring soundtrack while the client updated (absolutely classic, reminded me of Guild Wars 2 and Skyrim gets you into the mood for adventure), my new character was given a 14-day free “members” trial, then thrown into a town under siege by rock-like trolls, and some conversation and story later, introduced to the basics of combat, and step by step walked through the process of how to level most of the skills in a helpful twin town setting of Bunthorpe and Taverley. One nice touch, the storekeepers had freebie samples which were more than sufficient for a new player to learn the ropes, but not enough to go crazy grinding with.

Take note, this is how to sell a game. Give the player a taste of the good stuff, explain clearly what is for members and what is not, show ’em all the nice skills members have, get them used to having them, let them have a good time, and then show them EVEN MORE loyalty rewards you could stand to accrue if you continued with a membership, and then OFFER them a ludicrous 75% off your first month subscription then and there.

Whoever Runescape has for a marketing director, he is an evil genius. The barrier for entry was so low it eroded away any resistance I could put up. So I put down the equivalent of a buck ninety five in USD and am now subscribed for a month to Runescape.

One of the most common critiques I hear about this game is that it is an awful grind to “skill up.” I can see the potential for it to become such if getting to the end of the progress bar was all a person cared about, because it involves considerable repetitive clicking action.

But then again, through a browse of the Runescape wiki, I see the game as more of a long-term sandbox. Yes, I said sandbox. There seem to be a million and one different minigames and activities that you could be doing in Runescape. Choose what you want to do, develop laterally as you do that activity, and swap activities when you’re bored, seem to be way to play Runescape, similar to how one might attempt Guild Wars or A Tale in the Desert. Certain crafting activities are meant to take time and involve repetitive action, because in that way, lazy people can pay crafters to do it, and voila, you have an economy.

One of the things that attracts me most to Runescape is the quest content. It is oldschool. As in, slightly more Everquest or MUD inspired than the WoW sort. You talk to the NPC, you have a conversation that doesn’t comprise of two summary sentences, there is some humorous banter back and forth, and horror of horrors, you may even need to check a map to plan your path because there’s no automatic waypoint arrow. 🙂 That said, the new tutorial DID have waypoint arrows, and was very helpful in explaining to a Runescape newbie that other quests may not be so simple.

And did I mention the humorous banter? It reminds me of Quest For Glory and its ilk. I found a Thieves’ Guild in the older tutorial town of Lumbridge, and had many flashbacks to the old Sierra game while I helped the Guildmaster “procure” a treasure chalice. Afterward, I was laughing with great amusement as my character ribbed the Guildmaster, “Are you sure you have a buyer for the chalice?” “Sure, why wouldn’t I have?” “Well, the chalice wasn’t where you said it would be, and wasn’t with who you said had it, so maybe you don’t have a buyer either.” So far, many of the conversations with the NPCs go like that, fairly lighthearted, not taking themselves very seriously and occasionally gently poking at the fourth wall. It’s good fun.

Also impressive are the crafting options in Runescape. They are pretty deep. A piece of bronze armor involves mining copper and tin, finding a forge to smelt it into bars, finding an anvil to hammer it into shape. So far, not too dissimilar from regular MMOs. But then while mining copper and tin, lapis lazuli ore pops out, and you can craft and cut it into a polished gem. And then you need to chop down trees, which may yield a knot of wood, which then gets worked into a brooch setting, which you can pop the polished gem into. And speaking of those trees you cut down, the logs can be lit on fire, which you can then cook with, or turned into wooden materials to craft with further, including arrow shafts… which then need to be fitted with bronze arrowheads (see mining and smithing) and feathers (enter hunting for swifts by laying traps and chicken slaughtering). And those dead chickens? Well you can cook them. And those bones that all mobs drop? Buryable for piety skill increases.

Two main differences I can detect from most normal MMOs. One, you can do it all. Yes, no artificial “choose two professions, now make more alts to get the other crafting professions.” It’s just going to take you a really long time to grind up to very good in all of the skills if you really choose to do it all, I guess.

And two, I really like the “Use X on Y” ability command. This is an adventure game thing. The sense of immersion goes way up if you can opt to creatively combine or use verbs on various items.

Here’s me attempting to make bread: 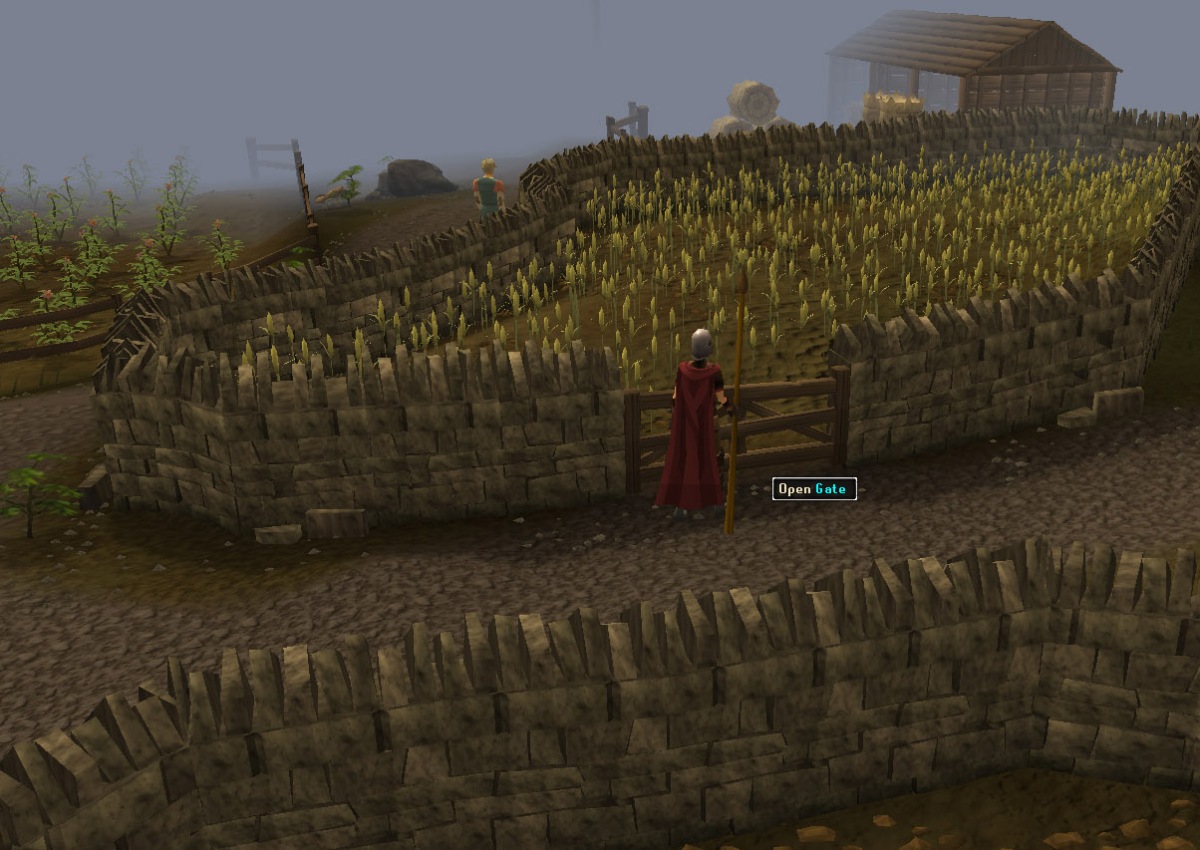 Step 2 – Proceed to flour mill. One of the nice things about having less taxing graphics is that we can have buildings that cutaway to reveal interiors without needing to zone to a new instance. 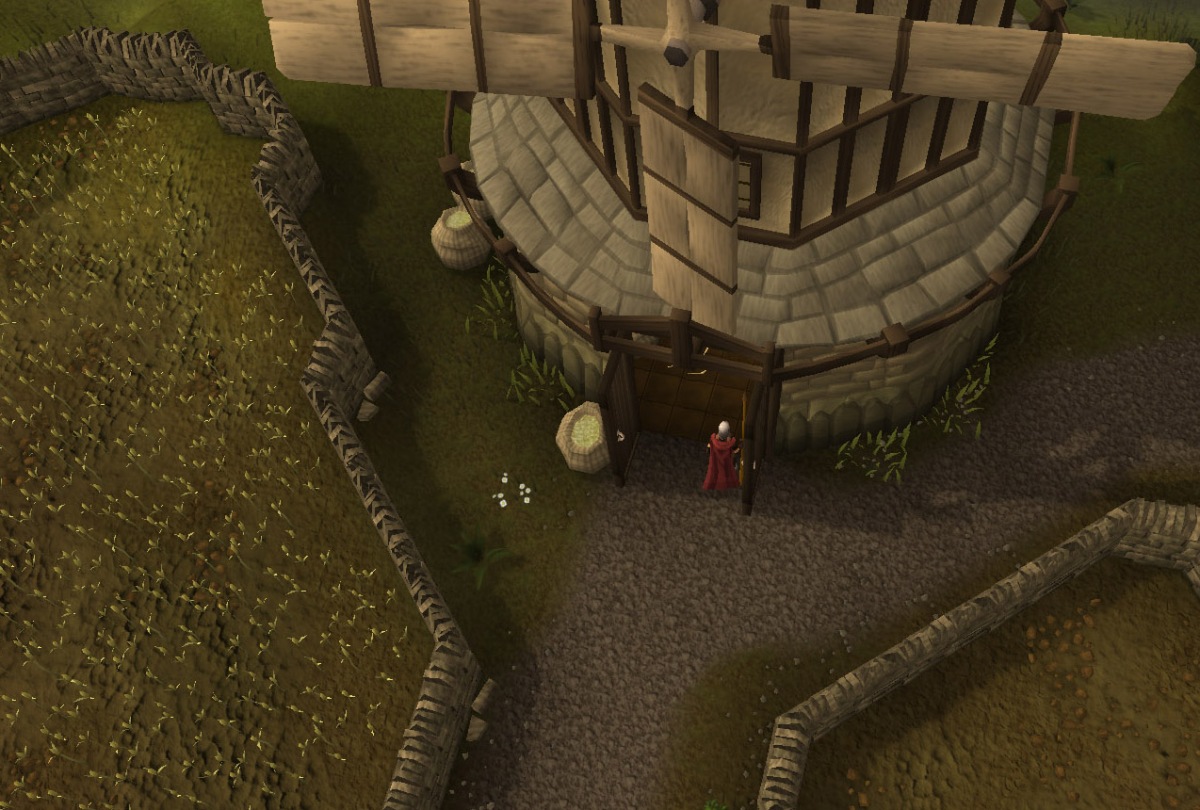 Step 3 – In the ground floor of the mill, there is the receptacle the flour will eventually end up, a convenient empty pot for picking up the flour with, and an optional miller NPC you can talk to and exchange pleasantries as well as ask how to grind flour. Yes, you can find things out from NPCs, not just a third-party wiki! 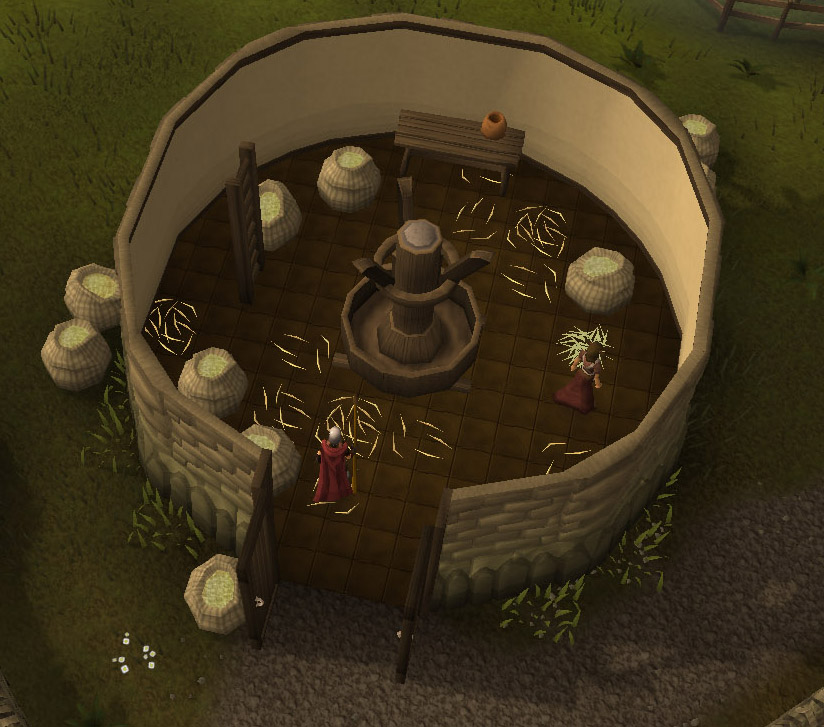 Step 4 – Climb the ladder and head two stories up. Use wheat on hopper. (Did I mention I love that “Use X on Y” command?) Operate hopper lever controls. *grind grind*

Climb back down ladder. 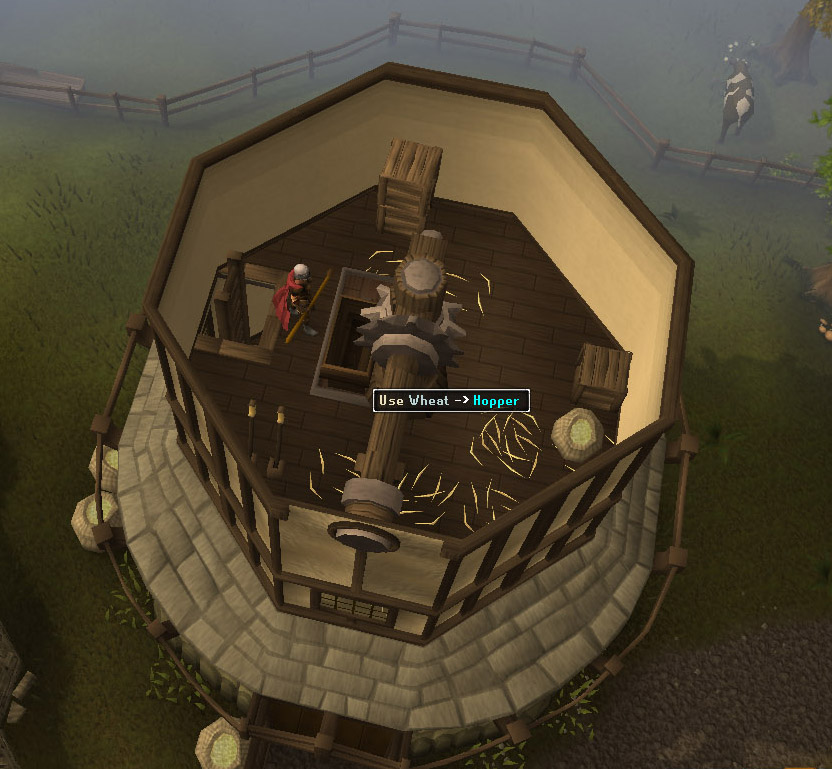 Here’s another nice thing about Runescape and their introductory experience. There’s a ding practically every step. There are seemingly a thousand and one simple tasks, that you can either follow and do via the task list, or even just wander the world talking to people and doing random stuff, and voila, a Task Complete pops up to surprise you and give you that warm fuzzy feeling of virtual achievement.

Every tiny increase in skill is made a big deal of by treating it as separate levels and giving it the whole level fireworks shebang. This is such a contrast to say, something like Wurm Online, where you are told in no uncertain terms that your skill is something like 6.7% and you’re going to fail repeatedly at making misshapen lumpy objects while you increment it to 7% and then 8%. You’re left feeling inadequate, and wondering if it’s worth the time, especially since each attempt takes up several boring tens of seconds watching an identical progress bar move.

In Runescape, let’s face it. Going from level 1 to level 99 is mathematically still the same thing as trying to get from 1% skill to 99% skill. But the semantics is different, and the way it’s dealt with is different. Most actions you attempt will succeed. If you fail, you either automatically keep attempting it, or you can repeat the action. Each successful action gives you a visible XP popup, indicating your gradual progress. And when you cross from midway through level 6 to level 7, wow, does the game celebrate your teeny tiny achievement. Hurrah, you are one level higher! It does make a difference.

Ok, back to bread. After flour, one goes looking for a source of water like a well to wet the flour and turn it into bread dough. I got lost, couldn’t find a well, eventually stumbled into a spooky little town called Draynor Village which was all shadowy and looked way too high level for me, found a water pump, successfully got bread dough, couldn’t find a working oven range to bake said bread dough into bread, wussed out and teleported back to the newb village of Lumbridge, where I couldn’t find a working oven range either because the cook at the castle had me traipsing off on another half-completed quest, and got totally distracted with the Thieves’ Guild questline instead.

I ended up wandering through a swamp where I decided to kill not ten, but a few, evil-looking giant rats for the fun of it, picked some nettles from outside a hermit’s cottage (swiping his leather gloves in order not to get stung by the nettles), and lighting fires outside the poor man’s hut in order to distract him, pickpocket the key he was carrying, in order to get at the treasure the Thieves’ Guild wanted. 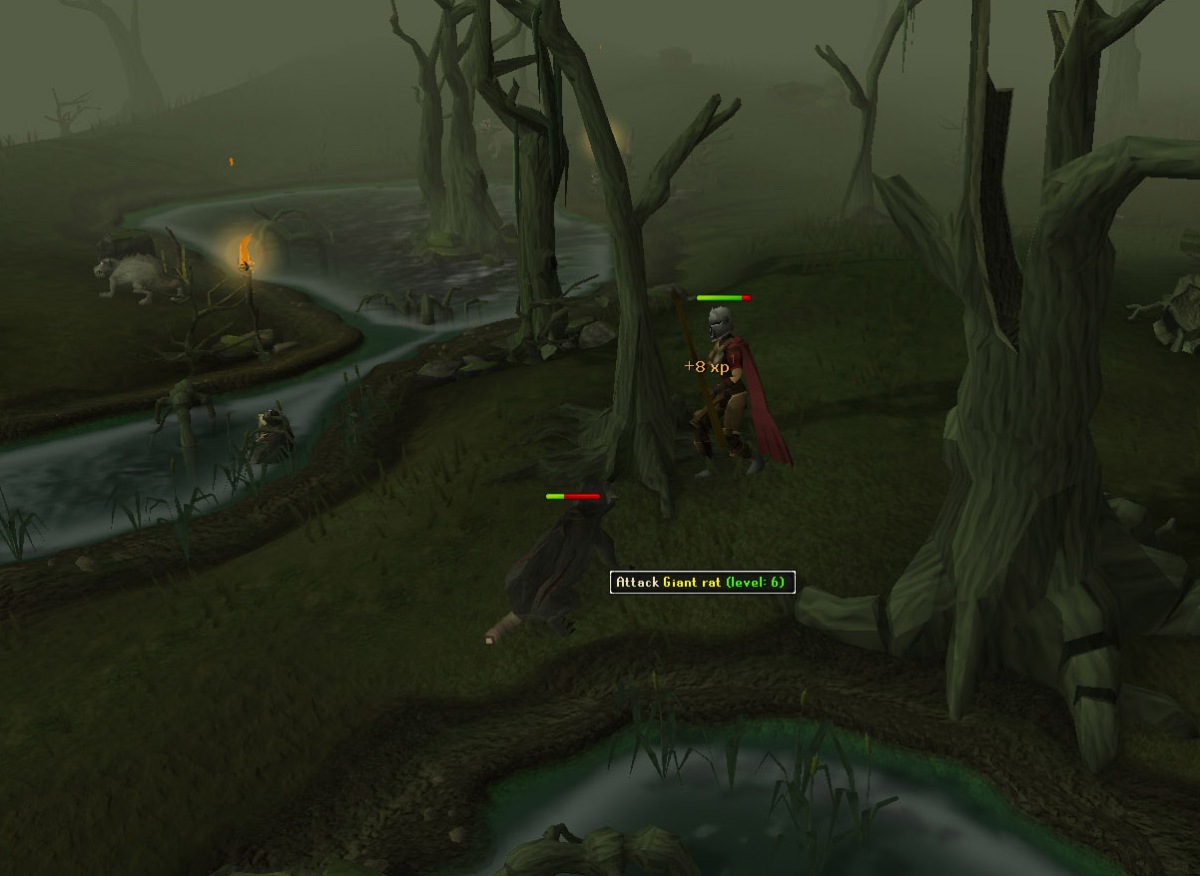 There will be other days for breadmaking. Adventure calls!

You know, if only more people would try stuff outside their comfort zone (and click to walk with no WASD movement is probably Runescape’s biggest hurdle to regular MMO players), they’d find that sandboxes are already out there.